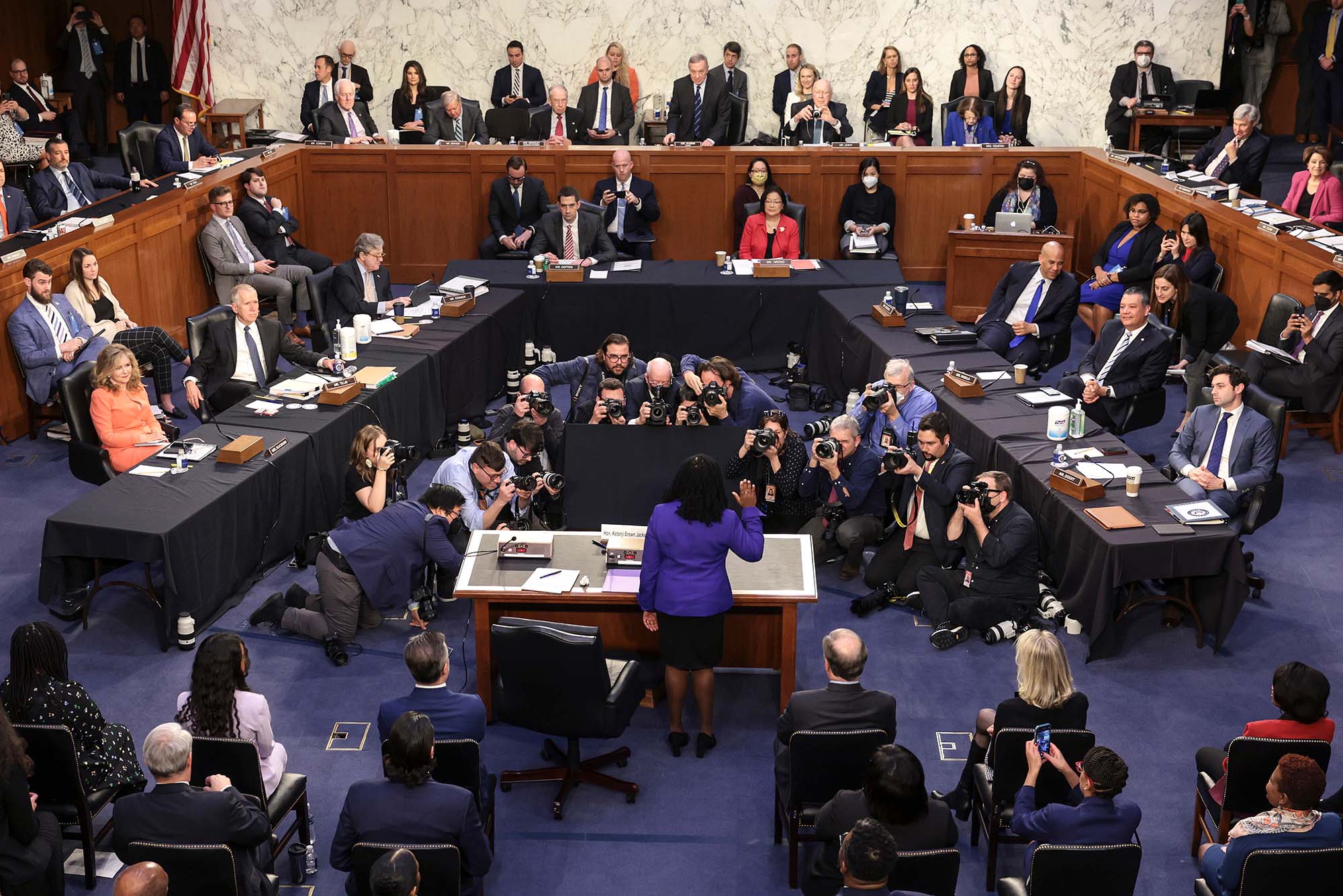 Ketanji Brown Jackson, now an associate justice of the US Supreme Court (center), being sworn in at a Senate Judiciary Committee confirmation hearing March 21. Jackson made history April 7 when she was confirmed by the US Senate as the first Black woman on the Supreme Court. Photo by Win McNamee/Bloomberg via Getty Images

BU LAW dean, 275 other Black women law profs, have had Ketanji Brown Jackson’s back since President Biden nominated her for the Supreme Court

Onwuachi-Willig has had Ketanji Brown Jackson’s back from the moment President Biden announced he would nominate the federal judge to the nation’s highest court.

She wrote the initial draft of the letter urging the US Senate to confirm Jackson, and she led an effort to collect the 275 signatures from Black women law professors around the country. Onwuachi-Willig, who serves on the executive committee of the American Law Schools Section on Women in Legal Education, suggested to other non-Black leaders in the section that they send a different, general letter from women law professors supporting the nomination.

Three of her colleagues, Susan Bisom-Rap, Naomi Cahn, and Lisa Tucker, took action, writing and sending a letter that garnered nearly 850 signatures. Tweeting her support of Jackson throughout the Senate confirmation hearings, Onwuachi-Willig also advocated for the judge in newspaper op-eds and interviews with CNN, The 19th News, BET.com, Bloomberg Law.com, and Law.com. “As Senator [Cory] Booker [D-N.J.] said, I’m not letting anybody steal my joy,” she told WGBH.

Paraphrasing the late Justice Ruth Bader Ginsburg, Onwuachi-Willig has said repeatedly over the past few weeks how important it is for “little Black girls, for everyone,” to see a Black woman justice on the highest court in America as “natural and proper.”

“I’m so excited for her,” Onwuachi-Willig tells BU Today. “She’s earned this. Black women have been the backbone of the Democratic party. We’re starting to see more Black women, and not just Judge Jackson, confirmed as judges to the federal appellate court, the trial court. There’s a love that Black women, Black people, have displayed for this country that has not always been reciprocated. This is a moment of joy. As Cory Booker has said, ‘We’re getting closer to fulfilling our ideals as a nation.’”

For Onwuachi-Willig, LAW’s Ryan Roth Gallo and Ernest J. Gallo Professor of Law, who is a leading scholar of employment and family law, gender inequality, and critical race theory, Jackson’s confirmation is deeply personal. “Watching the hearings and the way she was attacked, I think every Black woman in America, especially in the legal world and the legal profession, could relate,” she says. “Judge Jackson is going to be adding critical insights into Supreme Court decisions that will affect the lives of everybody, including Black women who are often excluded, whose realities are too often not considered and encompassed in Supreme Court opinions.”

It is also important, she says, that Jackson will bring to the court her perspective as a Black mother. Like the LAW dean has had with her three children, and like Black mothers across the nation have, Jackson has had “The Talk” with her two daughters, giving them advice on what to do if they are ever racially profiled and stopped and questioned by the police.

It’s possible, Onwuachi-Willig says, that Jackson’s lived experiences can help shed light on the gaps in Supreme Court doctrine concerning the Fourth Amendment. For example, according to the Court, police can ask individuals for their names or their IDs or even ask to search their bags—without any articulable suspicion—“so long as a reasonable person would understand [they] can walk away or stop the so-called consensual encounter.”

And yet I swear this oath—
America will be!” –Langston Hughes https://t.co/iepMgOWfIn

“But what Black person thinks they can stop such an encounter or end it without putting their life at risk?” says Onwuachi-Willig, who has herself been stopped by police while driving.

“The Supreme Court’s opinions in this area reveal how the law is often premised on experiences that do not align with many Black people’s realities,” she says. “It’s clear that the majority in these cases has not even considered that the very notion of a ‘consensual encounter’ with the police is legal fiction if you’re Black. The right to walk away in these encounters is not a right that Black people can exercise without serious risk to ourselves.”

Jackson’s experience as a Black mother juggling the conflicting demands of a family and a high-powered legal career, along with the microaggressions and bias encountered around race and sex in the workplace, also resonates with Onwuachi-Willig. During her hearing, Jackson addressed her daughters sitting in the audience: “Girls, I know it has not been easy as I have tried to navigate the challenges of juggling my career and motherhood. And I fully admit that I did not always get the balance right. But I hope that you have seen that with hard work, determination, and love, it can be done…I love you so much.”

Onwuachi-Willig says the confirmation hearings were a reminder that children are always watching and learning from their parents—even when “we as mothers are preoccupied with work or worried that we’re shortchanging our families.” She refers to a story Jackson once told about her daughter Leila, who was 11 at the time, writing to then President Obama in 2016, after Justice Antonin Scalia died, suggesting that Obama nominate her mother for the vacancy.

The LAW dean also mentions the New York Times photo that went viral, of Leila seated just behind her mother at the hearings and beaming at her with pride and love.

“I loved that photo,” Onwuachi-Willig says. “It reminds me that you’re parenting even when you think you’re not parenting, when you’re thinking you didn’t always get that balance right. You can see it in her daughter’s smile—there’s so much pure respect and love—that she was parenting in all those moments. Our kids are watching and learning.”

She says she treasures the selfie her own middle child, Bethany, shared with her: in the photo, Onwuachi-Willig is being interviewed on CNN shortly before the confirmation hearings began. Bethany is standing before her mother’s televised image and is visibly smiling through a mask.

“I was surprised and very touched by it,” Onwuachi-Willig says. “I love the look of pride in Bethany’s eyes. I love that it’s got the three of us in a row, Bethany, me, and KBJ.”

She also finds common ground in Jackson’s journey from high school student in Miami to Harvard undergraduate. Jackson applied to Harvard despite her guidance counselor’s warning that she was unlikely to be accepted. “I was saddened to hear that, but I wasn’t shocked,” Onwuachi-Willig says. “It’s a common story. I’ve heard numerous people talk about how they’ve had that experience—about all the times we’ve been underestimated and told not to pursue something. One of the things that gets ignored about bias in the Harvard–University of North Carolina affirmative action cases is how bias negatively affects African American and Latinx students before they even get to the application, through high school grading.

“If your teachers have biased expectations about what you’re capable of based on race, that’s going to shape how they read your papers,” she says. “For example, Black students are viewed as less capable. Think about the study with law firm partners who found more mistakes in the same exact brief when they thought it was written by a Black associate than when they thought it was written by a white associate. A Black student who gets an A works significantly harder to get an A in that class. They’re overcoming all that bias. That’s a perspective that only someone like Ketanji Brown Jackson, who has lived that experience, can understand.”

“So many of us have experienced moments where we walk into a room and we’re thought to be someone else,” she says. “Certainly not that professional. I’ve walked into a room in my own building [LAW] where someone was rude and dismissive to me, not knowing I was the dean, basically shooing me out of a room I was scheduled to be in.”

She had arrived at the designated conference room on time, prepared to interview a candidate LAW was recruiting for a staff position. “I’ve got limited time and this person waved me off, like, ‘I’m not finished,’” Onwuachi-Willig says. “I was trying to respond to this, without making it, or us, look bad in front of this candidate.” With the help of a staff person, she ended the interview without causing a disturbance in front of the candidate. “I thought, wow, you’re in my building,” she says. “He later wrote me an apology.

“For so many Black women who’ve walked into a room and been mistaken as a client and all kinds of other things,” Onwuachi-Willig says, “I think it’s important to change the image of what a [Supreme Court] justice looks like.”

Now, she says, a justice looks like Ketanji Brown Jackson.