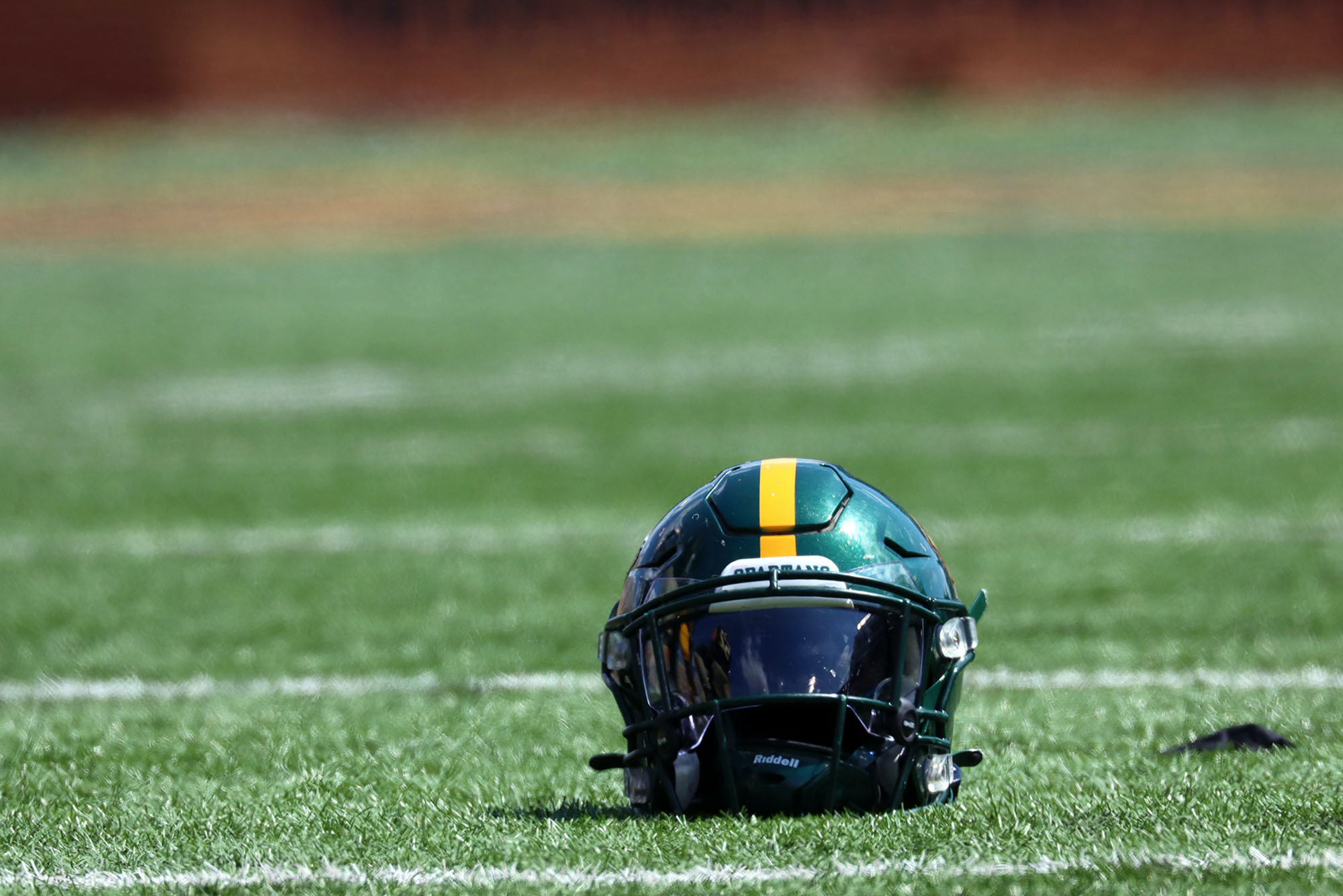 Experts have made breakthroughs on diagnosing CTE in the living and in studying the impact of college football on the brain, pro football’s link to ALS, and the risk of additional years of playing ice hockey

Whenever a football player struts in celebration after making another bone-crushing hit, it’s hard not to wonder what the jarring clash of heads did to their brain. Same when watching a soccer defender repeatedly thumping headers upfield or a hockey center skating gingerly away from a bruising body check.

After 15 years of research into the toll of repeated head traumas on the brain, especially among athletes, Boston University’s Chronic Traumatic Encephalopathy (CTE) Center has changed the conversation around contact sports—and shifted the viewing experience for many fans. The center is a national leader in the study of CTE, a progressive degenerative brain disease, and its work—particularly on diagnosing star players like 49er Greg Clark and Canadien Ralph Backstrom—has made news worldwide. CTE has been linked to multiple symptomatic concussions and asymptomatic subconcussive blows to the head; it’s been found in military veterans, as well as in former sportspeople.

For those afflicted by CTE, their brain can begin changing—deteriorating, even eventually shrinking—just months after a traumatic knock. For anyone who’s played an impact sport, the list of common symptoms posted on the CTE Center’s website is frightening: memory loss, confusion, impaired judgment, impulse control problems, aggression, depression, suicidality, parkinsonism. The final stage is progressive dementia.

The center is home to the VA-BU-CLF Brain Bank, which holds more than 1,250 brains for study and is billed as “the largest tissue repository in the world focused on traumatic brain injury and CTE.” Thanks to that library, BU researchers have found CTE—which can currently be diagnosed only after death—in more than 90 percent of former NFL players studied and shown CTE risk doubles after just three years of football.

With its studies continuing to advance our understanding of the disorder—and potential ways to prevent and diagnose it in the living—here are eight of the biggest CTE discoveries and headlines made by center experts this past year:

1. MRI Could Help Diagnose CTE in the Living

There’s no way to diagnose CTE when someone is alive. A patient and their doctors might make some best guesses—if, say, a former footballer renowned for big tackles is now struggling with confusion and anxiety—but confirmation comes only after death. In December 2021, BU researchers revealed that magnetic resonance imaging (MRI) might have the potential to change that and help spot CTE in the living.

They reviewed MRI images of the brains of 55 men who were diagnosed with CTE postmortem—but who’d been scanned while alive—and spotted shrinkage in the brain that didn’t show up in healthy male controls with normal cognition.

“MRI is commonly used to diagnose progressive brain diseases that are similar to CTE, such as Alzheimer’s disease,” says Michael Alosco, a BU School of Medicine assistant professor of neurology and CTE Center lead investigator. “Findings from this study show us what we can expect to see on MRI in CTE. This is very exciting because it brings us that much closer to detecting CTE in living people.”

Researchers are now looking to see whether the patterns they saw in people with CTE “differentiate CTE from Alzheimer’s disease and other causes of dementia,” says Alosco.

Progressive memory loss and issues with executive function, the ability to focus, follow directions, and problem-solve could all be markers that help diagnose CTE in the living. Researchers interviewed family members of 336 brain donors about their loved ones’ cognitive function in life, then evaluated the brains for CTE pathology. They found “progressive memory and executive function symptoms are particularly valuable” for predicting the presence of CTE, says Jesse Mez, a MED associate professor of neurology. Mood and behavior proved less useful.

“Our study provides doctors with information about which symptoms are most predictive of CTE pathology,” says Mez.

The University of Notre Dame is a college football powerhouse, with 11 national championships and nearly 500 players who went on to the NFL. But a study of former Fighting Irish players who were seniors between 1964 and 1980 found a dark side to that success. The ex–college stars were five times more likely to report cognitive impairment diagnoses than their peers in the general population—and had increased mortality due to degenerative brain disease. They were also two-and-a-half times more likely to report recurrent headaches and 65 percent more likely to have cardiovascular disorders during life.

Although there were some positives for the former players—including lower rates of diabetes and a significantly smaller chance of dying from heart and respiratory disorders—researchers said the negative health consequences were concerning.

“We all loved the game that we played at Notre Dame,” says Rocky Bleier, a former Notre Dame captain and four-time Super Bowl champion with the Pittsburgh Steelers. “We just believe that the health of the game and the health of the players go hand in hand, and hope that the results of this study provide some initial answers and benefits to our teammates, as well as future players and their families at all levels of the sport.”

According to a press release, the researchers also discovered a link between longer professional careers and increased ALS risk—those who developed the disease played an average of seven seasons, 56 percent longer than matched pro footballers who didn’t. The study included every player who debuted between 1960 and 2019 and played in at least one NFL game—close to 20,000 individuals—with diagnoses drawn from news reports and obituaries. Living players with the disease were also included in the study.

“In our brain bank, we have found a similar relationship between a longer football career and an increased risk of other neurodegenerative diseases,” says Ann McKee, director of the CTE Center. “It has become clear that years of repeated impacts to the head can cause the human brain to break down along many pathways.”

5. A Lot of Bad Stuff Is Going On in the CTE-Hit Brain

Past research on CTE has concentrated on the buildup of abnormal tau—a protein—in the brain’s gray matter. But researchers have also found changes in the white matter, the part of the brain that controls the signals flying up and down the spinal cord. In a study of eight CTE-impacted brains and eight matched control brains, they discovered changes in a type of cell called oligodendrocytes that help neurons speed up their message delivery.

“There is loss of oligodendrocytes and alteration of oligodendrocyte subtypes in CTE that suggest white matter damage is important to the pathogenesis of CTE and might provide new targets for prevention and therapies,” says McKee, who is a William Fairfield Warren Distinguished Professor and a MED professor of neurology and pathology.

Although football takes a lot of the CTE headlines, the dangers of ice hockey, with its crunching body checks and board slams, is getting increasing attention. Now, a CTE Center–led study has tied every additional year on the ice to a 23 percent increased chance of having the disorder.

In a study of 74 hockey players—from those who played at the youth level through NHL pros—researchers found more than half had CTE at the time of their death. They also discovered that each additional year of playing was linked to a 15 percent increased chance of someone progressing to the next stage of CTE. The disease has four stages—the final one includes brain shrinkage and associated dementia.

“While the absolute risk for ice hockey players of developing CTE is still unknown, it may be concerning to athletes and their families that we found each year of ice hockey play may increase the odds of developing CTE,” says Mez, who presented the findings in April at the American Academy of Neurology’s annual meeting. “Our research may be useful for them when making informed decisions about play.”

In April 2021, officials in York County, S.C., were left trying to make sense of the seemingly motiveless killing of a local doctor and five others, including the doctor’s young grandchildren. The county sheriff said they were murdered by Phillip Adams, a former cornerback who’d racked up six seasons in the NFL. Adams had apparently entered the prominent doctor’s home with two pistols, later fleeing to his parents’ home, where he took his own life. At the time, his father wondered if years of football—Adams reportedly started playing at age seven—had been a factor in the violent killing spree.

“I can say he’s a good kid—he was a good kid,” Alonzo Adams told local NBC affiliate, WCNC-TV, “and I think the football messed him up.”

After his death, Adams’ brain was donated to the CTE Center. There, researchers found he had stage 2 CTE—which commonly brings symptoms like depression, mood swings, and memory loss—at the time of his death.

“Adams had an extraordinary amount of CTE pathology in the frontal lobe, the area of the brain behind the forehead. Frontal lobe damage is associated with violent, impulsive, or explosive behavior, a ‘short fuse,’ and lack of self-control,” says McKee. “His CTE pathology might have contributed to his abnormal behaviors, in addition to other physical, psychiatric, and psychosocial factors. His predominantly frontal lobe CTE pathology, which resulted in atrophy, or shrinkage, of the brain, was similar in severity to Aaron Hernandez.”

8. If You Played Soccer or Football, You Can Participate in BU’s Research—No Brain Donation Necessary

If you played soccer or tackle football—at any level, at any age—you may be eligible to enroll in a new study that aims to examine the risks for developing dementia, cognitive decline, and changes in behavior and mood later in life after playing sports. The Head Impact & Trauma Surveillance Study (HITSS) will include an online annual assessment with questions about sports participation, exposure to head impacts, behavior and mood, and concussion and medical history; it will also include memory and cognitive tests. Anyone aged over 40 can sign up online.

“While there have been significant research advances in recent years, past studies have been limited by focusing solely on former professional tackle football players and/or including only small numbers of male participants,” says Matt Roebuck, HITSS recruitment coordinator. “To move the science forward, we are launching a nationwide campaign…to enroll thousands of people who played organized soccer or tackle football at any point in their lives.”

Additional reporting contributed by Julia Manning at the Concussion Legacy Foundation, Tim Sullivan at Spaulding Rehabilitation Network, and Renee Tesssman and Michelle Uher at the American Academy of Neurology.