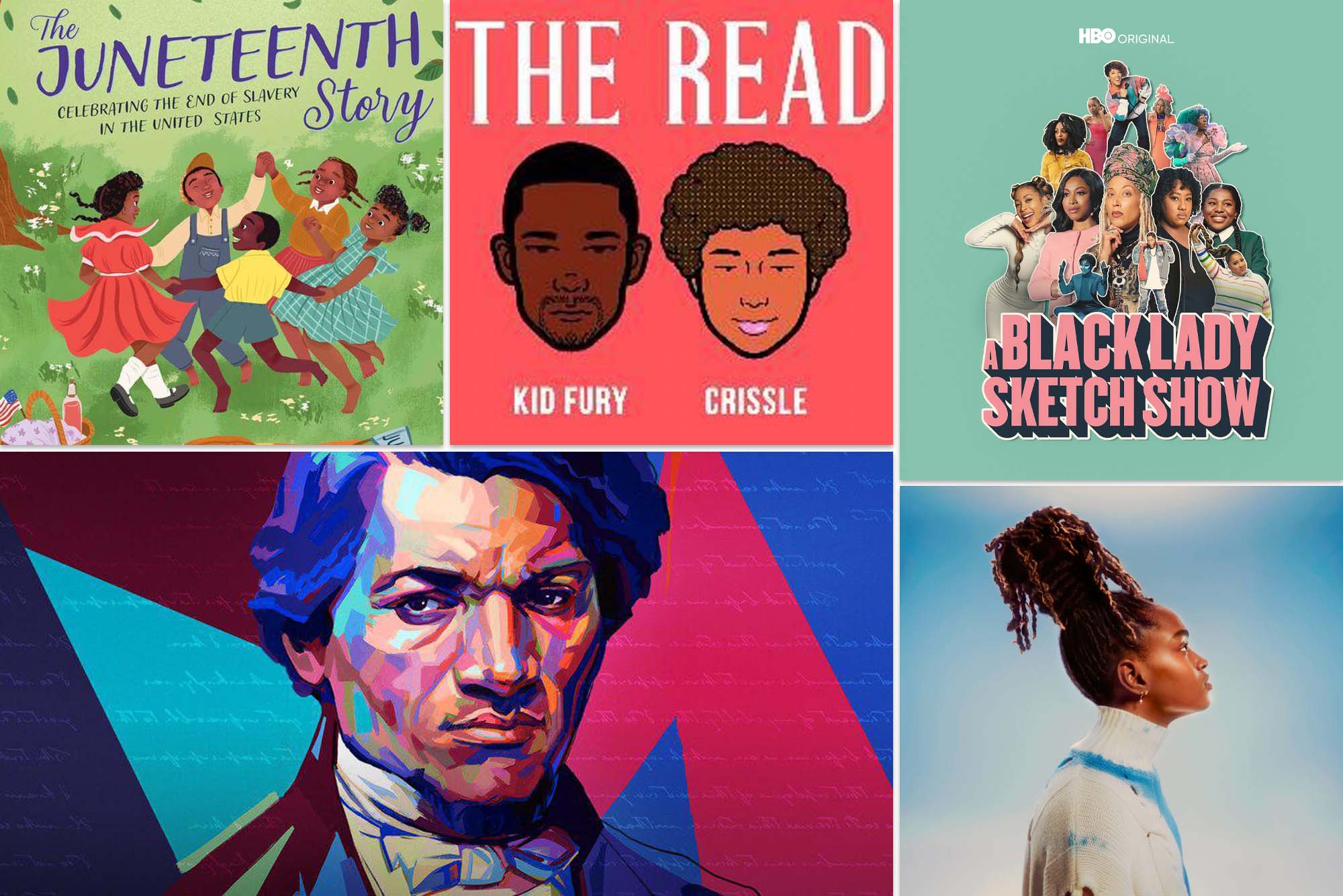 Juneteenth commemorates the day when the last enslaved people in the United States learned that they had been freed, June 19, 1865, more than two years after the Emancipation Proclamation.

While the anniversary has been celebrated in various parts of the country ever since, Juneteenth didn’t officially become a federal holiday until last year, after Congress passed legislation on June 16 and President Biden signed it into law the following day.

In honor of Juneteenth’s cultural significance, BU Today has put together a list of media—movies, books, albums, podcasts, and more—that celebrate and offer multiple perspectives on Black life in America.

If you plan on purchasing any of the books listed, please consider ordering them from a Black-owned bookstore.

After a four-year hiatus, Atlanta is back. The six-time Emmy Award–winning series, created by rapper/comedian Donald Glover, has been praised for its surrealist take on Atlanta’s hip-hop scene. Glover plays Earn, a Princeton dropout–turned manager for his cousin Alfred’s rap act. In season three, the main characters are no longer scrounging for success; instead, Alfred, aka Paper Boi, has begun his first European tour. With detours in Paris and Amsterdam, a surreal show becomes even more bizarre with Glover’s sense of humor leading the way. Available on Hulu.

A Black Lady Sketch Show is, in many ways, a trailblazer, but to showrunner/star Robin Thede it is first and foremost a love letter to sketch comedy. The show, which includes actors Issa Rae, Ashley Nicole Black, and Quinta Brunson, was recently renewed for a fourth season. With a cast and writers’ room comprising only Black women, Thede’s target audience is no secret. Still, there are enough laughs for everyone in ABLSS’s high-energy spoofs, which take on a range of things, from hair products to courtroom TV to heist movies, with equal irreverence. Available on HBO.

Producer and multi-instrumentalist Chaz Bundick, better known as singer-songwriter Toro y Moi, is back at his synthy, slo-mo best with the release of his seventh album. A longtime staple of the chillwave genre, Toro y Moi never trains his focus on one sound for too long—and Mahal is no exception. Psychedelia is well-worn territory for Bundick, but in Mahal the spaciness is interspersed with a focus on jazz, soul, and funk riffs. Listen to “Postman” for a dose of groovy, slap-bass nostalgia.

Vince Staples is not a good-times rapper. “To call this album entertainment would almost feel disrespectful,” Matthew Ismael Ruiz writes in a Pitchfork review. The tracks continue Staples’ reputation as a troubled man, and while he’s been honest with us before, his emotional vulnerability is taken to new depths in songs like “Rose Street.” Sonically, Ramona Park is a breezy, sun-soaked joyride, but lyrically it’s a reconciliation of all that Staples has lost, and a bittersweet ode to his wayward youth.

Koffee makes it all seem so easy. In her first studio album, the 22-year-old Jamaican singer, songwriter, rapper, deejay, and guitarist shows a clear instinct when it comes to weaving pop hooks with riddim vocals and upbeat lyrics with melodies that tend toward the melancholy. Her understanding of both roots reggae and pop forms—mixed with a heavy dose of indie yearning—pulls together into something so cohesive and natural it could have been released any time in the last two decades. The resulting effort has earned the album’s title: she’s gifted, all right.

Emergency, the hit 2022 comedy/thriller directed by Carey Williams, is a buddy movie with none of the usual trappings: there are some laughs, but they’re quickly supplanted by dread as the protagonists, all young men of color, try to help a passed-out white woman at a party. Calling the police, they decide, is too dangerous. In an interview with IndieWire, Williams says that the humorous elements were the film’s “special sauce,” but the heart of the story is about the deteriorating relationship between Kunle and Sean, two Black friends of different economic backgrounds who suddenly can’t reconcile their differences when the stakes get high. Available on Prime Video.

Master, a horror/drama directed by Mariama Diallo, is the story of three Black women at Atwater, a fictional Ivy League campus “nearly as old as the country.” What begins as microaggressions and an escalating sense of isolation among the protagonists—faculty members Gail and Liv and freshman Jasmine—soon becomes an out-and-out ghost story when Jasmine uncovers the legend of a witch who appears to haunt only Black students. Unlike previous reality horror films—like Jordan Peele’s Get Out (2017)—Master subs science fiction for folklore, hinting at a collective history of atrocities that colleges like Atwater would rather keep hidden. The film stars Regina Hall, Amber Gray, and Zoe Renee. Available on Prime Video.

While his legacy is undeniable as an author and orator, Frederick Douglass’ provocative speeches were never recorded. Produced by acclaimed historian Henry Louis Gates, Jr., and directed by Julia Marchese, Frederick Douglass: In Five Speeches aims to bring the legendary abolitionist’s words to life, using the talents of Denzel Whitaker, Colman Domingo, Nicole Beharie, Andre Holland, Jonathan Majors, and Jeffrey Wright. Each speech is representative of a different era within the 19th century, and in turn, reflects Douglass’ evolving political philosophy. Available on HBO Max and HBO On Demand.

Black queer bloggers Kid Fury and Crissle West are the hosts of The Read, a weekly podcast covering hip-hop and pop culture’s most “trying” stars. A tried-and-true intersectional favorite for many, each episode spotlights everyday Black people doing remarkable things, provides comedic takes on hot topics, answers listener letters, and calls out the issues plaguing their minds that day.

After nine years, the show has amassed a loyal following that has spawned sold-out live shows and merchandise drops, a show on Fuse TV, and an original comedy album through Issa Rae’s label Raedio.

If you’re looking to learn more pop culture and gain deeper perspectives on the issues facing the Black (and queer) community at large, The Read is a great place to get your foot in the door. Available on Spotify, Apple Podcasts, iHeartRadio Talk, Soundcloud, and Stitcher.

Centered on mental health and wellness, The Friend Zone is hosted by real-life friends Assanté, Dustin Ross, and HeyFranHey. The three navigate their way through discussions on platonic and romantic relationships, race, and being true to yourself.

Aided by Fran’s knowledge of holistic wellness, the show is both entertaining and informative and is seen by many as a resource and a way to explore topics listeners might otherwise have trouble finding outlets for.

Fran’s careful consideration, Dustin’s assertive confidence, and Assanté’s ability to bring us down to Earth create a dynamic that provides insight and comedy every week. Available on Spotify, Apple Podcasts, Audible, Soundcloud, and Stitcher.

Random Order Podcast features brothers Jermaine and Trevaunn (Trey) Richards and Sheldon Sabastian, who discuss “everything from laundry to alien invasion.” The three hosts’ hilarious storytelling makes fun of their lives, each other, and trending topics while still making space for vulnerable and open-minded conversations, abetted by friends who pop in as guests.

The podcast highlights the hosts’ intersectional experiences as young adults, Caribbean descendants, and Black men living in America. If you’re looking for a guaranteed stress-reliever, this showing of “Black boy joy” is the way to go. Available on Spotify, Apple Podcasts, YouTube, Soundcloud, and Acast.

Alliah L. Agostini grew up in Buffalo, N.Y., where her grandfather cofounded the city’s Juneteenth Festival in 1976. In her new picture book, The Juneteenth Story, the author pays tribute to her grandfather’s legacy (the Buffalo Juneteenth Festival is now one of the largest in the nation) and brings to life the Emancipation story for young readers The  book focuses on the twin legacies of slavery and emancipation in equal measure, tying in the Poor People’s Campaign and the Texas Centennial Exposition. It also explores the arduous path to making Juneteenth a federal holiday.

Author and anthropologist Zora Neale Hurston’s essays and criticism are sometimes overshadowed by her novels (Their Eyes Were Watching God). But this recently released collection of her essays seeks to remedy that. This anthology is the last word on Hurston’s oeuvre, drawing on 35 years of observations on Black society as it evolved from the Harlem Renaissance to the Montgomery bus boycott. With her knack for encapsulating Black joy in its limitless forms, Hurston’s voice seems more essential now than ever.

This long-awaited follow-up to How to Be an Antiracist by Ibram X. Kendi, founding director of BU’s Center for Antiracist Research and BU’s Andrew W. Mellon Professor in the Humanities, has been released in time for Juneteenth 2022. The latest book by the best-selling author and noted educator, whose call for individual actions in the face of systemic racial oppression helped earn him a 2021 MacArthur Foundation “Genius” grant, focuses on how individuals can foster growth and analysis among their own families, drawing on his trademark blend of research and personal experience.

In her debut novel, Tara M. Stringfellow weaves the personal and political into a family drama spanning three generations of Black women. Memphis, site of the famous April 3, 1968, “I Have Been to the Mountaintop” speech by Martin Luther King, Jr. (GRS’55, Hon.’59) and his assasination one day later, is also the ancestral home of Stringfellow’s fictional North family and their private triumphs and sorrows. Drawing from her own background and the historical events that impacted her family, Stringfellow weaves a narrative that spans from World War II to the present, meditating on the systemic injustice of Southern racism and the resilience it cannot erase.

Celebrate Juneteenth with These 15 Films, Podcasts, TV Shows, Albums, and Books
0
share this