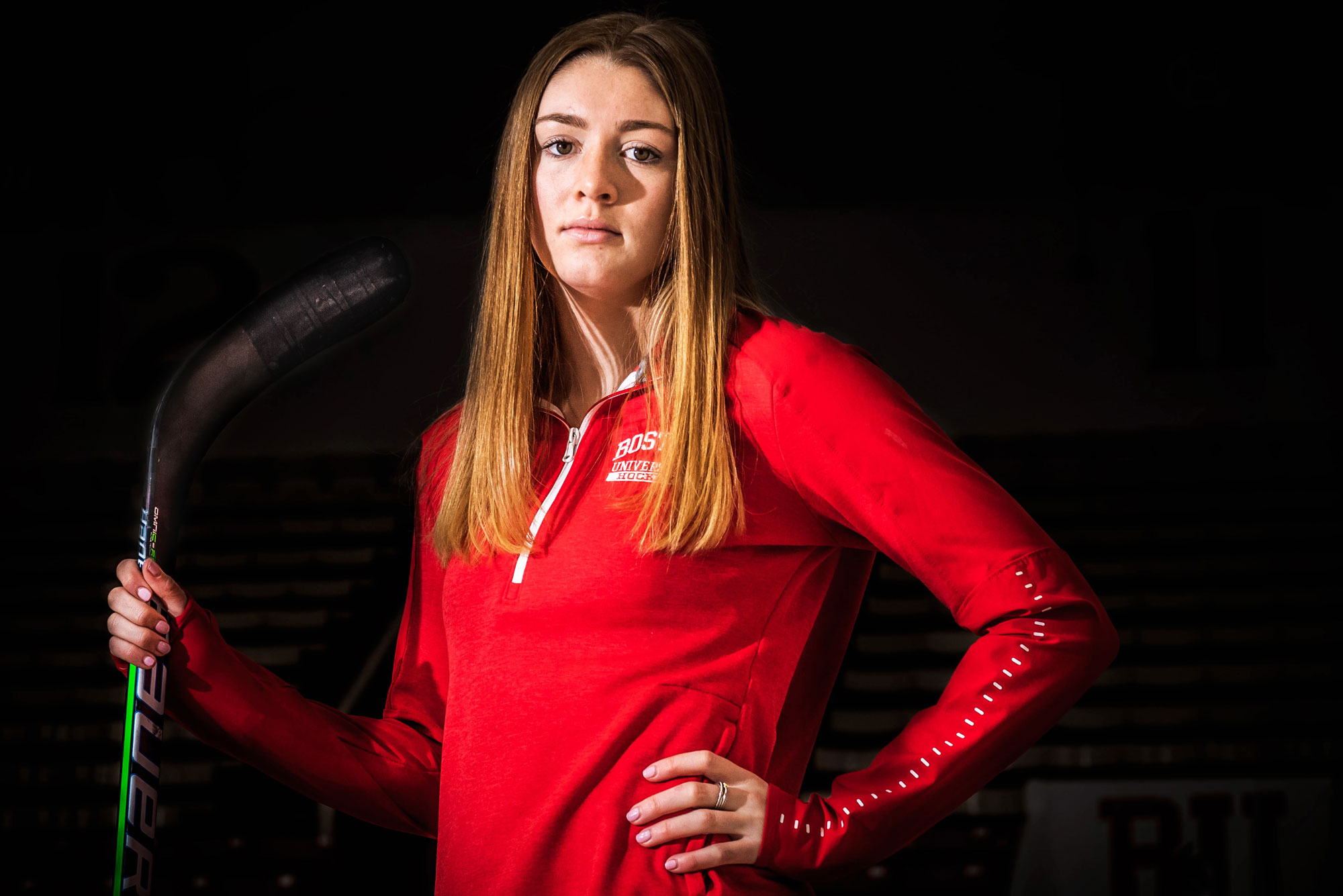 After planting herself in the BU women’s ice hockey record books, Jesse Compher (SHA’21) hopes to compete in the 2022 Winter Olympics in Beijing. Photo by Jackie Ricciardi

Jesse Compher is a first-liner who plays like a fourth-liner, her coach says. On the surface, that might not sound like a compliment. To a hockey coach, though, it’s one of the best qualities you can ask for in a player, especially a captain.

“She plays so hard, competes so much…and she can do so much skill-wise,” says Brian Durocher (Wheelock’78), BU women’s ice hockey head coach. “It’s a great combination to have as a hockey player.”

Compher (SHA’21) is in the final sprint of a remarkable BU hockey career. Even while missing time from injury and the pandemic-shortened 2020-2021 campaign, she has posted 123 points, good for ninth all-time in BU women’s ice hockey. This year, she was picked as a team cocaptain.

Her talent is evident, but Compher attributes her success on the ice to her competitive edge.

“I think that if you watch a BU practice or BU game you can kind of see it—I don’t like to lose,” she says. “I don’t care if I’m playing against my best friend or anybody on the other team, I don’t like to lose and that’s kind of the mindset I go into it with.”

Born to athletic parents, Compher grew up in the Chicago suburb of Northbrook, Ill., and she spent her childhood competing with her older sister, Morgan, and her older brother, JT, now a forward with the NHL’s Colorado Avalanche. “It doesn’t matter what we’re doing around the house, nobody likes to lose,” she says.

That mentality set Compher up for early athletic success: she was part of a team that won four consecutive state hockey championships and a national title in high school. She also skated on the international scene, where she earned two gold medals with the US Under-18 Team at the IIHF Women’s World Championship in 2016 and 2017.

It didn’t take long for Compher to draw attention in Hockey East. Appearing in every game her freshman year, she posted the second-most assists (17) of any first-year in the conference, the third-most points on the team (26), and was chosen for the 2017-2018 Hockey East All-Rookie Team.

Compher exploded as a sophomore, leading Hockey East with 61 points, putting her second of any Terrier in a single season and third nationally that year. She was unanimously named a Hockey East First Team All-Star, a Second Team All-American, and was a top-10 nominee for the Patty Kazmaier Award, given to the most valuable player in NCAA women’s hockey.

Durocher says the biggest contributing factor to Compher’s breakout sophomore season was her ability to harness her “super intensity,” especially in her skating.

“In her time at BU, Jesse has evolved as an even better skater,” he says. “There was a relaxation element that came up somewhere between her freshman and sophomore years and really assisted her to move forward as a hockey player.”

The highlight of that sophomore year was BU’s 2019 Beanpot win, the first in program history as a varsity team. Compher says the victory was her favorite moment as a Terrier. Her assist on the overtime winner by linemate Sammy Davis (CGS’17, Sargent’19, Wheelock’20) brought the Beanpot trophy to Commonwealth Avenue for the first time in nearly 40 years.

“Being out there and being a part of the overtime goal was definitely something special and something I’ll never forget,” she says.

Ankle surgery delayed the start of Compher’s junior season. Despite that, she was voted a Second Team All-Star, tying for fourth in Hockey East in points per game (1.11) and finishing in the top four on the team in goals (13), assists (16), and points (29) despite playing 10 fewer games than most of her teammates.

Between her hyper-competitiveness and the bar set by a stellar second season, Compher says sitting out the start of the 2019-2020 season was the most challenging time of her BU career. She credits her teammates with helping her overcome that hurdle.

“We have such a close-knit team here, everyone’s so supportive,” she says. “With the people around me, I was able to get through it.”

As a senior, Compher leads the Terriers with five goals, averaging a goal a game, and is tied for the team lead in points (7). She was entrusted with the “C” on her jersey, a dream of hers since close friend Rebecca Leslie (Questrom’18) captained BU Compher’s freshman year. “I kind of always looked up to her and just wanted to follow in her footsteps,” she says.

Teammates say Compher is a natural to helm the team. Courtney Correia (CGS’20, Questrom’22), who has shared the ice with her for three seasons, says Compher’s captaincy was well-deserved and has had a positive impact on the team. “She has definitely been a leader on the ice since I came to this school,” she says. “She’s extremely committed—every time she steps on the ice, she really wants to be there.”

Durocher cites the “innate confidence” Compher brings to the ice for her success and lists her among the top Terriers he has coached in his 16 years behind the BU bench.

“Without a doubt, she’s one of those people in the history of our program that sticks out in any conversation as one of the elite players,” he says. “She checks an awful, awful lot of the boxes to be thought about with some of the top kids here.”

With a player of her skill and motivation, Compher’s ceiling is “super high,” the coach says. She has skated with the USA women’s national team on multiple occasions, cracking the roster for the 2019 and 2020 IIHF Women’s World Championship tournaments and the 2019-2020 rivalry series against Team Canada.

Next on Compher’s list: the 2022 Winter Olympics, set to take place in Beijing. Durocher says he can easily see her on the roster. “If I’m that coach,” he says, “maybe she’s not knocking a Kendall Coyne or Brianna Decker off the first line, but she can play with everybody, and…will be a heck of a great addition to any third line or fourth line.”

In her pursuit of a regular national team spot, Compher says she has learned from BU assistant coaches Tara Watchorn (CAS’12), an Olympic gold medalist with Canada in 2014, and Liz Keady Norton, a former Team USA player.

“It’s been cool to learn from them and kind of get things from their perspective and just learn the little details of what it takes to be a national team player,” she says.

Compher credits that attention to detail for much of her success. “In the back of my head, I’m always thinking about what I can do to be better on and off the ice,” she says. “You can have skill, but if you don’t have the right mindset of wanting to be better, wanting to win, and wanting to support your teammates, then you’re not going to get very far.”

In addition to her personal ambition and goals, Compher has a bigger mission—to help grow the sport of women’s hockey.

“I wouldn’t be here playing college hockey without the women who paved the way for me,” she says. “As long as I can, I’m going to try to promote women’s hockey…and do what I have to do to not only make a national team roster, but to grow the game as I go.”

The BU women’s ice hockey team will be in action Friday, February 19, at 2 pm, against the Eagles at BC, and Saturday, February 20, at 4:30 pm, at home, also against BC. The 2021 Women’s Hockey East playoffs begin next week.