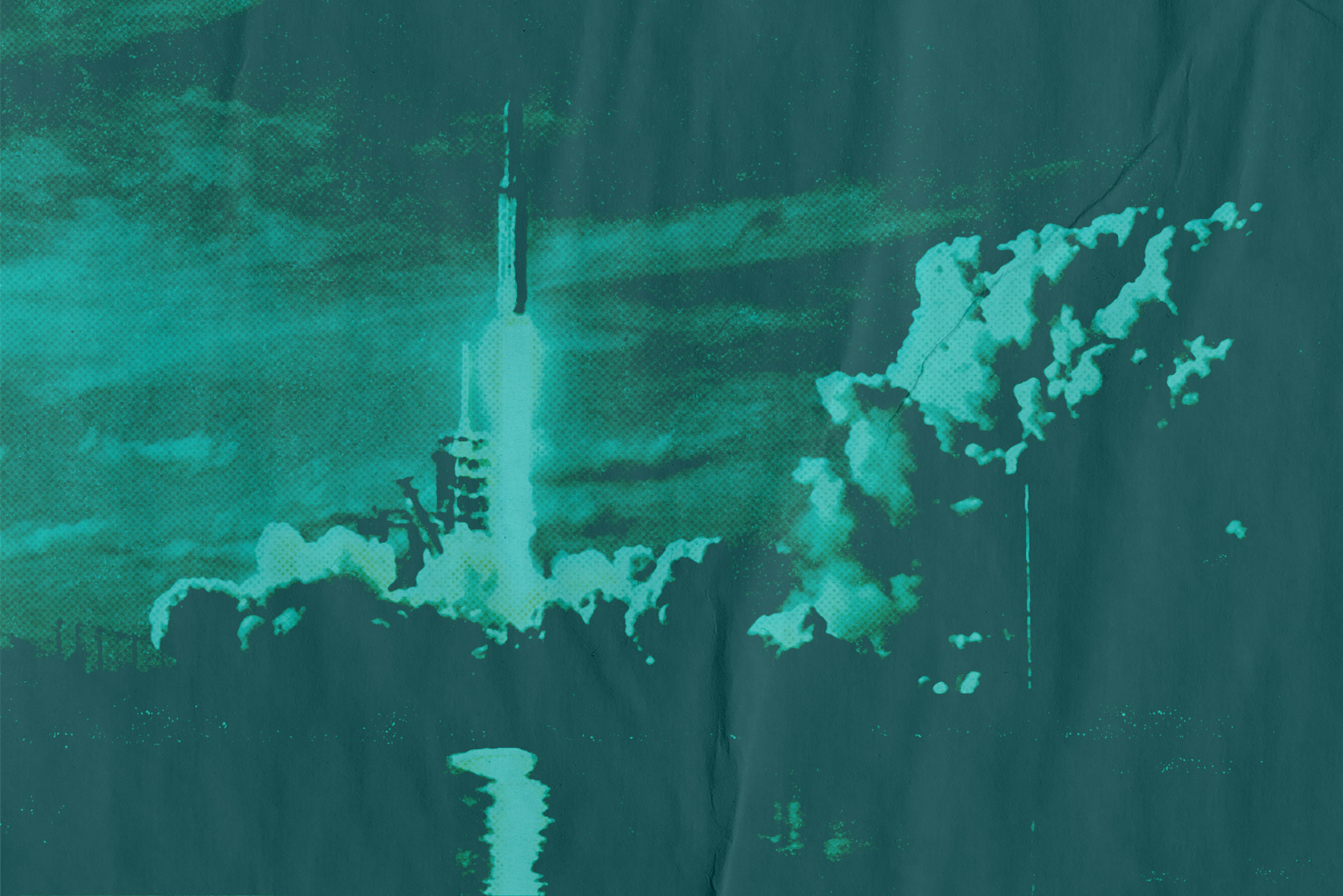 With Space Tourism a Reality, Will Civilians Travel to Space? And When?

Majd Mayyasi (GRS’09,’13), a BU Center for Space Physics senior research scientist, discusses the future of civilian space travel and how it would impact the study of space with BU Today editor Doug Most. She also shares her experience training for suborbital flight as part of an inaugural program for scientists.

With space tourism now a reality, will civilians travel to space, and when? This summer, billionaires Jeff Bezos and Richard Branson each took a suborbital flight in their respective supersonic rockets, launching a new era of space travel, where a ticket to space is available to anyone who can afford it.

In this episode, Doug Most asked Majd Mayyasi, a senior research scientist at the Center for Space Physics at Boston University, about the future of civilian space travel. Mayyasi also shares her experience training for suborbital flight as part of an inaugural program for scientists.

So when I read the stories about Bezos and Branson, I admit that I wondered, if given the opportunity, would I want to go up to space? Seeing Earth from above and experiencing weightlessness would be incredible, that’s not really debatable, but is that enough? What do you think? Will space tourism become a real thing?

Majd Mayyasi: Well, Doug, this is a really good question. And one that I’ve been thinking about for a long time, way before Jeff Bezos and Richard Branson made interesting flights. About 11 years or so ago, there was an opportunity for scientists to train for suborbital flight. And the reason they were doing this was because they knew that ultimately this would become a reality, space tourism and space travel.

And also they wanted to get scientists engaged in this opportunity, so it’s been a project that has been in the workings for a very long time. And I actually partnered up with a group that was training scientists to do these suborbital flights. And so I was lucky to be a member of one of the first groups of scientists that got the train for this.

And we trained for the Virgin Galactic module, so it’s been something I’ve been thinking about for a long time. And since that time, you know, would I actually go to space if I had the opportunity? And the answer is most definitely yes. It is by far one of the coolest things I’ve ever done.

It’s extremely engaging to talk about with other people, especially when I do outreach to communities. And in talking to children about what you can do as an astronomer, or how to engage them in astronomy, it’s super fun to tell them that you can potentially go to space someday—if that’s something that you’re interested in—without having to go through all the rigorous training that an astronaut would go through [to become] a full-fledged astronaut.

And so there’s a lot of cool opportunities, and I’m happy to see that this is starting to become more and more of a tangible reality.

Most: Can you just take us inside that training? What was that like? How hard was it and sort of what were you doing?

Mayyasi: It was about a week long or so. It involved a lot of technical background that we first needed to be aware of before we engaged in any of the actual physical training. The physical part involved going into an altitude chamber and seeing what would happen when oxygen levels dropped to a certain level.

With a lot of tests that we needed to undergo or to take, mental tests to see what our thinking capacity would look like with less oxygen. Another test was in the centrifuge—we got to go into the centrifuge, and I think that center has one of the only centrifuges meant for this kind of training in the country.

Most: What were those like? What was it like to experience the three times and the six times?

For the purposes of three, the challenge was not to pass out, because at three times the force of gravity, the blood is more challenged and being pumped up to your head. And say you’re more likely to start seeing stars before you actually get to them, physically. And so there are maneuvers that you try to basically activate the larger muscles in your body to constrict the blood to enforce it basically to stay up in the upper half of your body.

And that will help you not pass out ultimately, which works, I have to say. The six times the force of gravity on GX, so going into your chest, was really fun and I think a lot of people see that sometimes on TV. When someone has just plastered to their chair and their skin on their cheek is rippling back, that’s a lot of exactly what it looks like and feels like.

It’s pretty interesting, it’s like getting, it’s actually kind of soothing, because your body’s just plastered up against this chair. And it feels like an interesting kind of full body massage.

Mayyasi: Yeah, that’s really close to it. The challenge is not to turn your head, because that will make you extremely dizzy.

There are cells in your ear that are very sensitive to that kind of force, and it can make people very dizzy for a few days after the fact if they accidentally gets stimulated in the wrong way. So there are some challenges, some restrictions, but it is so much fun, and it was so exciting to be able to train with that program.

And more interestingly, it was very, I think it was very convenient, to be able to be given that opportunity to be able to go into space. And when we’re talking about scientists going into space, we’re not going for the ride; I mean, that’s in and of itself, very cool, obviously. But we’re also going to able to do some science. And you’re gonna be in zero gravity or in that part where you feel weightless for about four minutes. And so the challenges are in being able to design an experiment that you can do in four minutes: designing something that you can debug potentially in four minutes, if anything should go wrong, understanding how to mitigate those issues because you’re gonna be in microgravity.

So you’re gonna be flying around and then your pencil is gonna be in one place and your notebook is in another place. So, mitigating all of that should you have to debug anything is also something to keep in mind. And we did have training for that as well.

Most: It sounds like you think that there will be a day when civilians may actually get a chance to travel into space? You sound somewhat confident—how far out is that?

Mayyasi: That’s a great question. I think that depends on the business model of these companies.

Because currently, as I understand it, the ticket is about a quarter of a million dollars. And so it’s definitely beyond my budget, both personally and professionally. If I were to put this on a science grant to fund my project, for example, it would have to be 10 times less than that, something closer to the $25,000 range.

Currently, people have gone to the edge of space with this program. So just at that time cutoff, I’m gonna use SI units here, it’s 100 kilometers, that defines the edge of space more or less. And so that’s where these spacecraft have gone to. To go beyond that, there are other factors to take into consideration also.

It all depends on what the application is. And there are also certain guidelines I think one should be aware of, in terms of what’s already out there at different altitudes. When I was given the opportunity to join this team, it was through a competitive process at BU. They had offered us one seat at BU, the group that was organizing this, and the scientists that ultimately got chosen were from all over the US.

And so, this one seat given at BU was offered by competition and I proposed a certain experiment that I could do at that altitude. I also have a young child and when I talked to him about this, he’s like, “No, you should never go into space, that’s too scary, it’s too risky,” and so on.

But so is driving in your car and so is going on a plane, right? Those are all risky things. I would most definitely go, because it’s so exciting. And because, for me, as a scientist, it offers a lot of opportunities that are not accessible through other means.

This 100-kilometer altitude, it’s not easily accessible by many other methods; I mean, there are maybe sounding rockets that can go up that high. And you can maybe look down at that region from spacecraft that are higher up, but actually physically be there, in situ, and to be able to do your experiment at that altitude, I think, is a remarkable opportunity, and I would take it without hesitation.

Ferrante: Thanks to Majd Mayyasi for joining us on Question of the Week.

If you liked the show, please remember to rate, share, and review us on your podcast app of choice. I’m Dana Ferrante; see you next week.

How Is the Conversation around Mental Health Changing among College Students?

With Space Tourism a Reality, Will Civilians Travel to Space? And When?

There are 2 comments on With Space Tourism a Reality, Will Civilians Travel to Space? And When?

With Space Tourism a Reality, Will Civilians Travel to Space? And When?
Question of the Week Podcast
2
share this