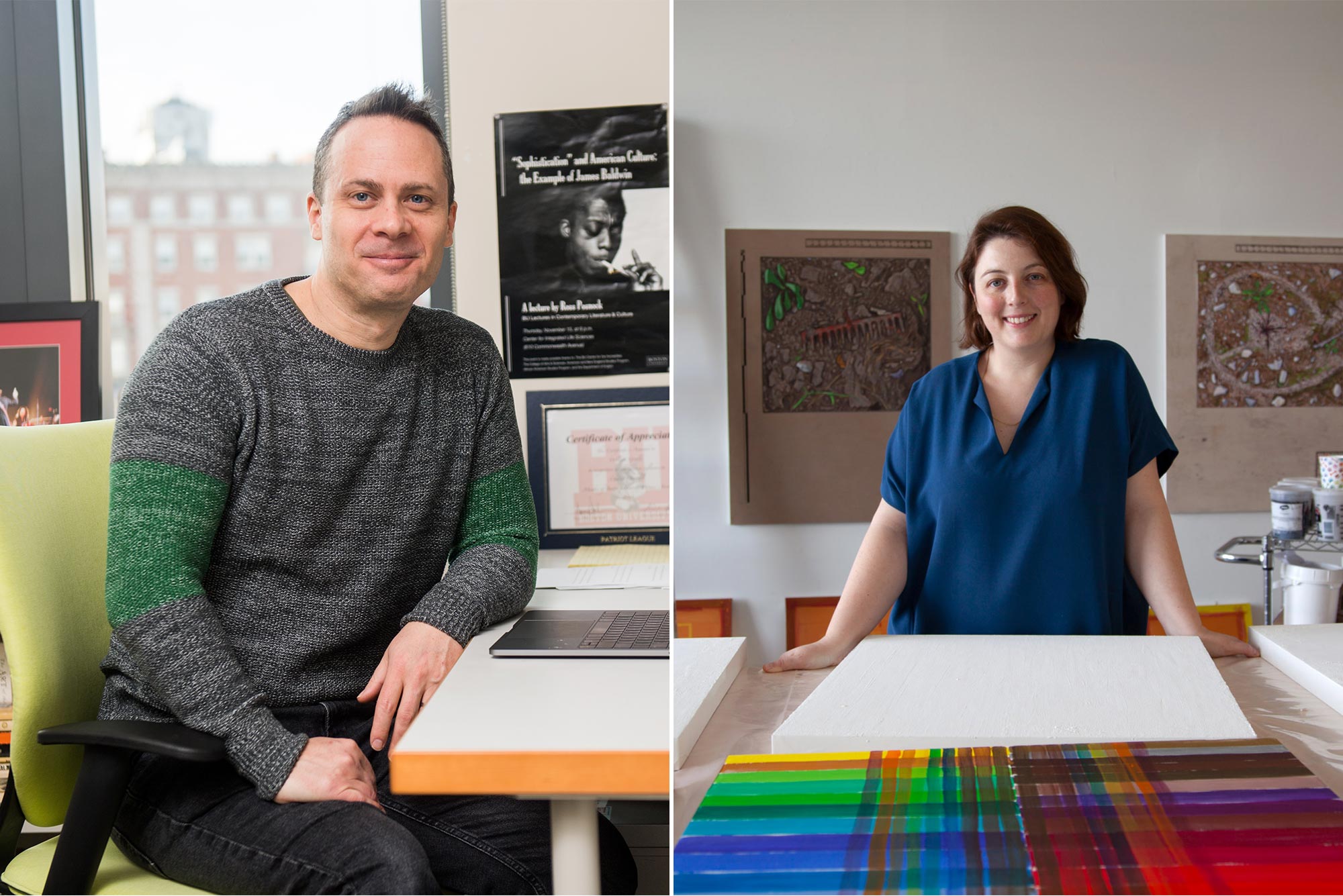 Meet BU’s new Guggenheim Fellows: William Giraldi is a CAS Writing Program master lecturer and author of the memoir The Hero’s Body and two novels; Josephine Halvorson, a CFA professor of art and chair of graduate studies in painting, is a noted painter whose work has been shown internationally. Giraldi photo by Cydney Scott. Halverson photo courtesy of Halvorson

CAS novelist and CFA painter search for truth—in society, and in our own lives

Through different media and from different perspectives, William Giraldi and Josephine Halvorson explore reality. Giraldi (GRS’03), a College of Arts & Sciences Writing Program master lecturer, has written one memoir, about the loss of his father, and is working on a second, about his mother’s early death, probing what makes a person who he is.

Halvorson, a College of Fine Arts professor of art and chair of the School of Visual Arts graduate studies in painting, is renowned for carefully observed still lifes and landscapes that have been shown internationally. She is now turning her artist’s eye toward what she calls our cultural “unrelenting undermining of truth.”

Their oeuvres have earned both a 2021 John Simon Guggenheim Memorial Foundation Fellowship, awarded annually to artists, scholars, and scientists who “have already demonstrated exceptional capacity for productive scholarship or exceptional creative ability in the arts.” Each of this year’s class of 184 Fellows, chosen from 3,000 applicants, receives cash awards of varying amounts.

Both winners did a double take (or more) at the emails telling them they’d won. “You have to read it a few times to make sure it isn’t a prank,” Giraldi says. “I keep waiting for the Guggenheim Foundation to realize their mistake and call to ask me for the money back.”

“I must have reread the email a few dozen times,” says Halvorson. “I was able to contact my recommenders and thank them. I write a lot of letters of recommendation, and it was nice to be on the other side.”

Their colleagues, however, have no doubts about their talent. Chris Walsh (GRS’95,’99), a CAS assistant professor and director of the Writing Program, recalls watching Giraldi teach another writer’s searing memoir involving addiction and former prisoners tortured at Abu Ghraib. “He challenged his students both to analyze intellectually—‘What could this “bomb” in the title signify?’ he asked—and to engage emotionally, existentially, with the book’s difficult, disturbing themes,” Walsh says. “This stuff mattered to Billy, and he made sure it mattered to his students.”

I keep waiting for the Guggenheim Foundation to realize their mistake and call to ask me for the money back.

Harvey Young, dean of CFA, calls Halvorson “a painter whose works are endlessly fascinating in the way that they make you reconsider objects and places that are deceptively familiar.

“Professor Halvorson is a dedicated teacher who is committed to being an effective, engaged, and present mentor to our visual arts students. Josephine is one of the most significant painters working today—and I am thrilled that her Guggenheim fellowship will help expand the reach of her impact.”

Putting a lens on pain comes from experience for Giraldi, whose own memoir, The Hero’s Body, included his father’s fatal motorcycle crash when Giraldi was a young man. He is also the author of two novels, Hold the Dark (adapted by Netflix) and Busy Monsters, and American Audacity, an essay collection ranging from the Boston Marathon bombings to Herman Melville.

His book in progress, Seraph and Storm, “will be a memoir about my mother, her abandonment of our family when I was a child, and her self-destruction at age 55,” he says. His Guggenheim grant will pay for research and travel he must do to understand her death, he says: “She was an apparition in my life; there is much I don’t know about her, and perhaps can never know, but I’ll have to try if I’m ever to understand fully where I’ve come from.”

Working without photographs, Halvorson paints in the plein air tradition—working out of doors in all elements and changing light conditions, often in a single sitting. Her work has won her a Fulbright Fellowship, the Rome Prize from the French Academy at the Villa Medici (she was the first American so honored), and an exhibition in 2019 at the Institute of Contemporary Art/Boston, where she was named one of four recipients of the museum’s biennial James and Audrey Foster Prize exhibition. She also creates prints and sculpture.

Halvorson frequently works in places that are personally important to her, from her home/studio in the Massachusetts Berkshires to an abandoned mine in Death Valley. Looking ahead, she says she plans to “make art that further integrates my painting practice with a journalistic sensibility. I’ve been asking myself how, as an artist, I can offer evidence, veracity, and accountability. My practice, direct as it is, requires me to believe my eyes, follow my perception, and transcribe what I see through the medium of paint and stand by it.

She joined BU in 2016. “In the last five years,” she says, “I helped to secure greater and more equitable funding for all students, initiated a lecture series that has welcomed over 80 artists to Boston, and collaborated with other departments and institutions.”

Since their establishment in 1925, almost $400 million in Guggenheim Fellowships have been awarded to more than 18,000 people.