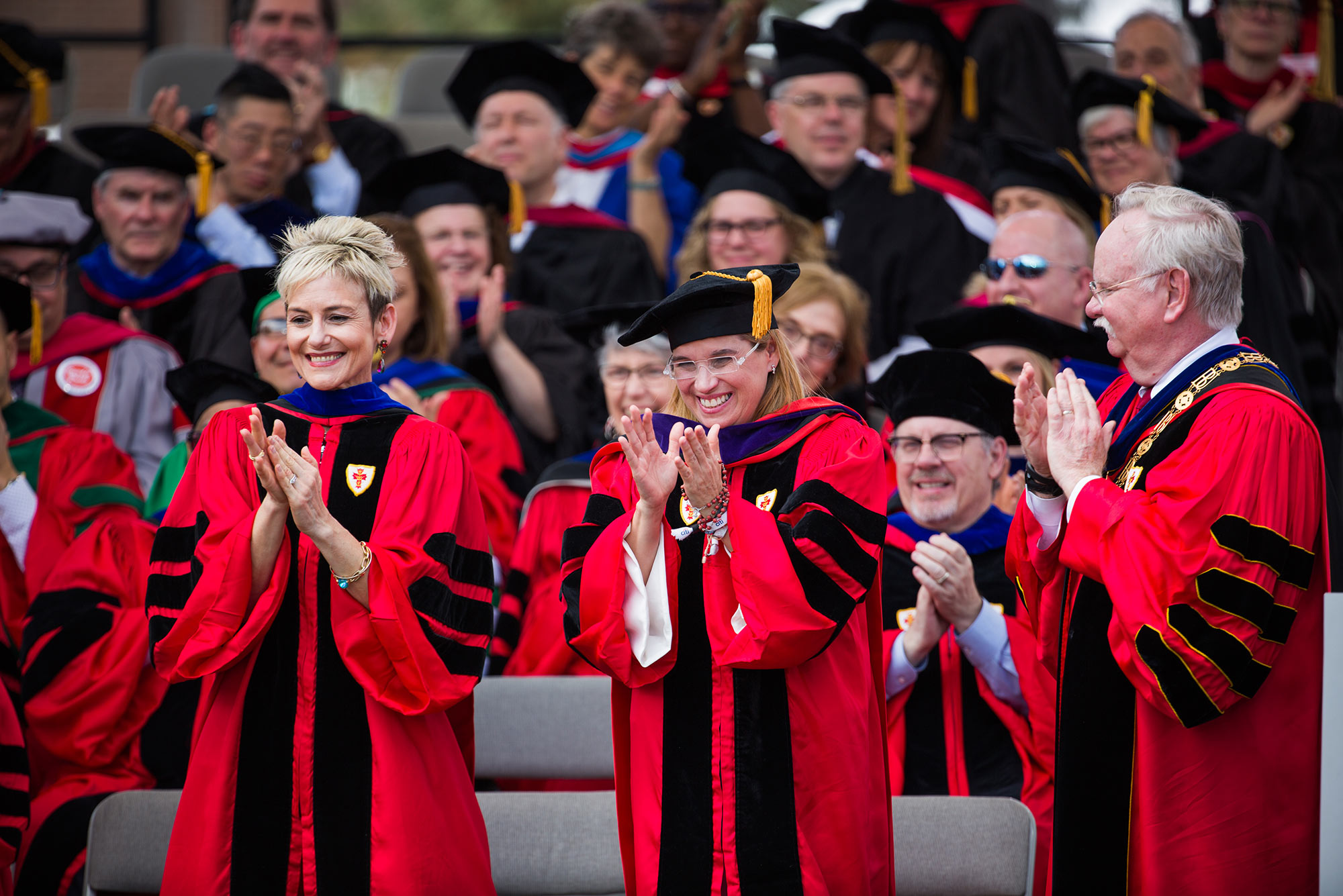 “It is our hope that providing an endowed chair will bring to the forefront new ideas that will lead to changes that promote justice for all,” says University trustee Ryan Roth Gallo (LAW’99) (left, at BU’s 2018 Commencement). Photo by Michael D. Spencer

School of Law Dean Angela Onwuachi-Willig, a renowned scholar in critical race theory and an expert in racial and gender inequality, as well as antidiscrimination law, has been named as the inaugural Ryan Roth Gallo and Ernest J. Gallo Professor.

Endowed by Ryan Roth Gallo (LAW’99), vice chair of BU’s Board of Trustees, and her husband, Ernest J. Gallo, with a gift of $3 million, the professorship lines up with the School of Law’s history of being forward-thinking on inclusiveness in regard to race and gender. The professorship is not only the first one at the School of Law to support a faculty member whose research focuses on critical race theory (CRT), the study of systemic racism and its effects, with a preferred focus on the intersection of race and gender, it is the first professorship in CRT in the country. Roth Gallo, a member of the LAW Dean’s Advisory Board, describes CRT and one of its subspecialties, critical race feminism, as “exciting and important areas for modern legal scholars and practitioners.”

“As we have seen for many years, and increasingly over the past summer, our country needs some new and innovative ideas about how to meet the ideal of equal justice for all,” Roth Gallo says. “It is our hope that providing an endowed chair will bring to the forefront those new ideas that will lead to changes that promote justice for all.”

“We are deeply grateful to Ryan and Ernest,” says Boston University President Robert A. Brown. “The establishment of the Gallo professorship is a wonderful commitment to the quality of the faculty of the Boston University School of Law. Dean Onwuachi-Willig is an incredibly deserving inaugural holder of the chair, which will greatly aid in the advancement of her research and scholarship.”

In addition to her antiracism work—which includes research on cultural trauma as experienced by African Americans in relation to repeated acquittals and lack of indictments in cases of police killings of Blacks—Onwuachi-Willig is a longtime advocate for building structures in academia that can enable individuals or institutions to overcome or tackle racism. In 2007, she founded the Lutie A. Lytle Black Women Law Faculty Workshop for mentoring current and aspiring women of color law faculty, which has resulted in the production of more than 1,200 articles, 125 book chapters, and 40 books, plus the appointments of one college president, one provost, 15 law deans, and numerous associate deans who are women of color since its founding. More recently, Onwuachi-Willig received the Association of American Law Schools inaugural Impact Award, along with four other Black women law school deans, for starting the Law Deans Antiracist Clearinghouse Center, a digital resources and community center for law deans, students, faculty, and the public.

Onwuachi-Willig says the Gallo Professorship signifies the University’s commitment to antiracist research. “It also reveals the extraordinary leadership of Ryan Roth Gallo,” she says, “who routinely displays not only a great love for BU School of Law, but also the values that its founders espoused—equality, justice, and one could say, antiracism.” Onwuachi-Willig plans to use the prestige and resources of the professorship to continue pursuing her research and turning the School of Law into a model for other law schools to follow.

“We know from studies and surveys that structural dimensions of law and law schools make some groups of students feel more alienated during law school, which means they do not have equitable access to the same education,” Onwuachi-Willig says. By hiring more diverse faculty and aligning with University resources like the BU Center for Antiracist Research, for starters, her goal is to ensure that all BU law students “have an equitable experience inside and outside of the classroom,” regardless of their race, gender, sexuality, socioeconomic levels, and other identity characteristics.

“BU has an excellent law school,” Roth Gallo says. “Under Dean Onwuachi-Willig’s leadership, the school is attracting many fabulous scholars and teachers with a greater diversity of backgrounds. Endowing this chair shows that trustees and alumni also support the push to create a learning environment where the professors and deans are both excellent and reflect the gender and racial diversity of our country.

“Every law school now wants to claim that it values diversity, inclusion, and equity,” Roth Gallo adds. “Dean Onwuachi-Willig, supported by Provost Jean Morrison and President Robert A. Brown, is showing that BU walks the walk, or as students say, ‘they have receipts.’”