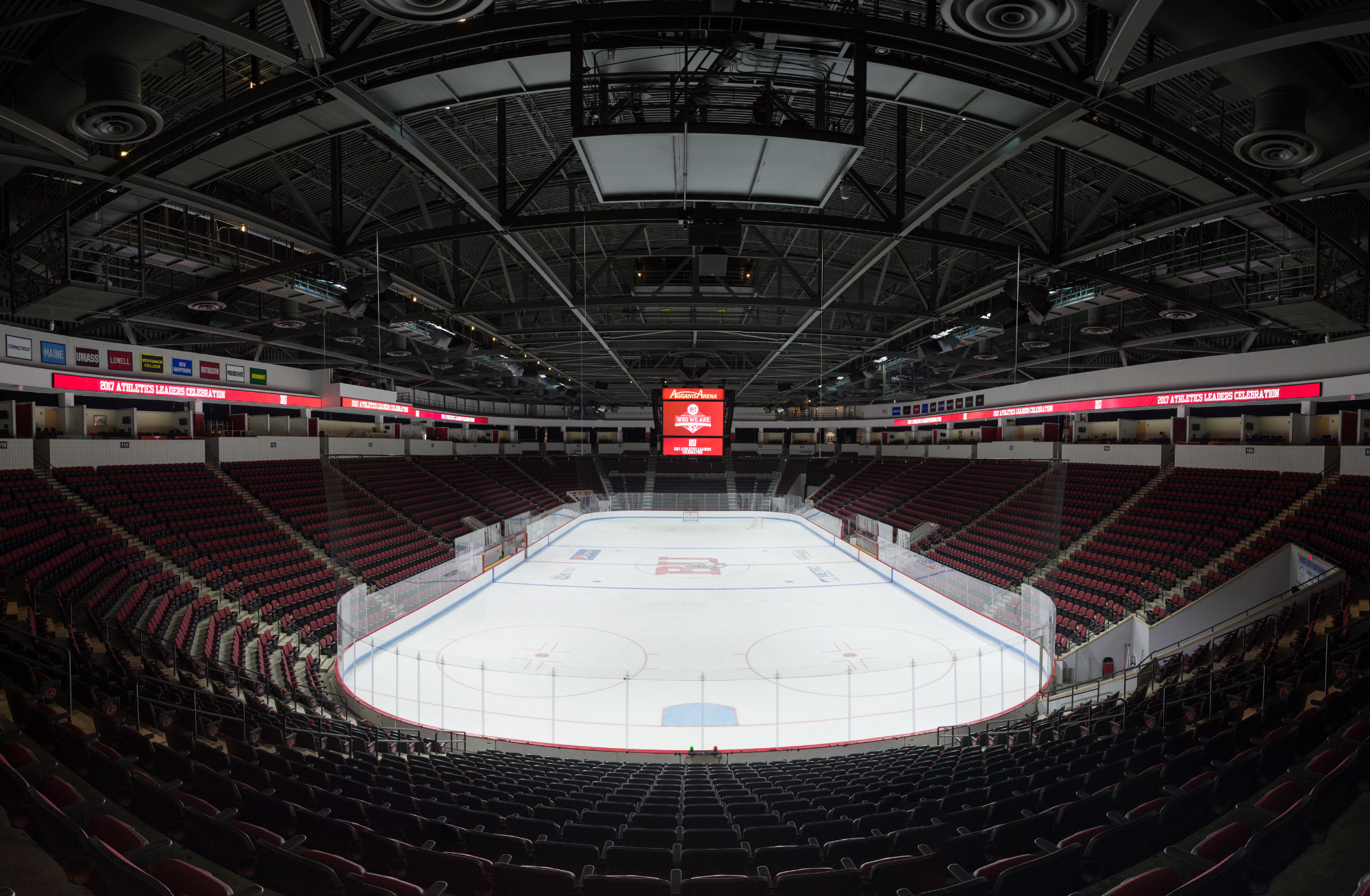 10 Tips for Your First Game at Agganis Arena

Everything you need to know for the best game day experience

Hockey season is just around the corner, and this year fans will be back in the building. Students who attend eight BU men’s hockey games at Agganis Arena this season will receive a free official team jersey. Before you go, here are 10 things you should do on game days at Agganis Arena.

Try to arrive 30 to 45 minutes before face-off. Being early will let you avoid the long lines of fans streaming in close to the start of the game, and you’ll have plenty of time to tour the arena, get some food, and grab a good spot in the student section. Sit back and relax as the BU Band fills the arena with popular songs before the teams hit the ice.

It’s always fun to go down to the first row during warm-ups and watch the players practice from right next to the ice. You get to see the athletes up close, check out their pregame routines, and if you’re bold, you can feel like a goalie by standing at the glass behind the net while the players fire off shots. Who knows, maybe you’ll even recognize someone from your class on the team.

3. Be in your seat 10 minutes before the game

As the scoreboard’s pregame clock winds down, be sure you’re in your seat so you don’t miss the pregame festivities. With the BU Pep Band, the video team, and the national anthem singers, Agganis Arena has one of the best pregame presentations anywhere. You’ll want to be there to experience the excitement when the Terriers take the ice.

If you’re a current BU student, you have to experience BU’s student section, the Dog Pound. The most popular spot is section 118, where the super fans stand against the glass and the Pep Band fills the upper rows. You can choose to be anywhere in between, and no matter where you are, you’ll be sure to have a good time with the best fans in Terrier Nation.

We’ll help get you started. The other team’s goalie is always referred to as “sieve,” so you’ll be hearing that a lot. And yes, the student section will be chanting “BC sucks” even if Boston College isn’t that night’s opponent. It’s just part of the rivalry. The other 90 percent of the Dog Pound’s repertoire is generally improvised, so follow the veterans and you’ll fit right in.

A self-guided tour is the best way to learn about BU Hockey and the Agganis Arena. Walk around the main concourse and check out the exhibits on the walls, with plaques for BU Hockey Hall of Famers, jerseys of former Terriers who play in the NHL, and so much more. It doesn’t take long to complete a loop around the concourse, so take your time and snap some pictures as you go.

Whether you’re looking for a meal or a snack, there are plenty of food options all around Agganis Arena. My personal favorite is the buffalo chicken, but you really can’t go wrong with any of the selections around the concourse. The concession stands even have special deals for BU students, including a variety of menu items that cost students just $2.

8. Keep yourself and others safe

While so many aspects of going to games will be the same as they always were, the main difference this year is that all fans will be required to wear a mask inside the arena. So, when you’re not actively eating or drinking, remember to keep your mask on. I already have my BU-themed mask. Do you?

9. Celebrate with the Pep Band after BU wins

If the Terriers win, stick around immediately after the game for one of the best traditions in college hockey. The band plays “Hey Baby” while the student section dances and sings along with the song. It may sound silly, but it’s been a staple of BU Hockey for decades. And when hundreds of students and fans do it together, it’s a pretty special way to celebrate a victory.

What’s the Cane’s Challenge? Every game, the Raising Cane’s next to the arena gives students big discounts if the team reaches a certain milestone, like scoring three goals or shutting out an opponent. Even if the Terriers can’t complete their mission, Cane’s is always a popular place after the game, especially if BU wins. End your night with a postgame treat.

The BU men’s hockey team plays its first home game at Agganis Arena on Saturday, October 9, at 7 pm, against the University of Connecticut. Students get in for free with a Sports Pass, so log in and claim your ticket. If you need help accessing your pass, visit Agganis Arena’s Sports Pass Guide.

10 Tips for Your First Game at Agganis Arena