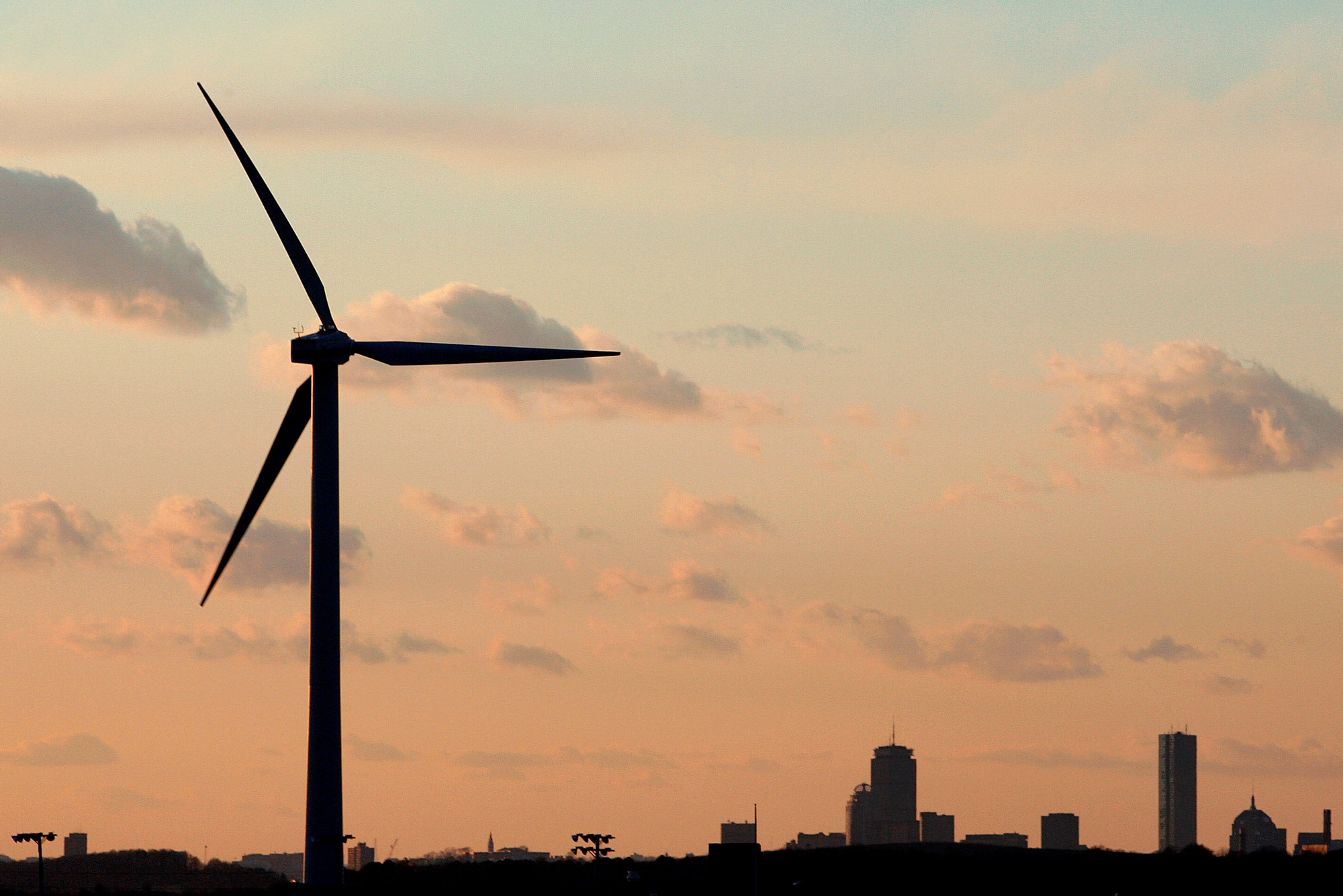 Dennis Carlberg, associate vice president for sustainability at BU, says the bill is a necessary step for Massachusetts to lower emissions and keep up with progress already made from past climate legislation. Photo by Stephan Savoia/AP

BU sustainability expert explains how the bill—passed by legislators, vetoed by Baker, and now back on the table—would aggressively advance climate action

On January 14, 2021, Massachusetts Governor Charlie Baker vetoed an ambitious piece of climate action legislation, named the “Next-Generation Roadmap,” which was passed by the State Legislature earlier in the month. The proposed bill would require Massachusetts to reach net-zero carbon emissions by 2050. It would also put environmental justice definitions into law for the first time in the state’s history, ramp up offshore wind power by thousands of more megawatts, and make Massachusetts one of the country’s most aggressively focused states on reducing carbon emissions.

Since Baker’s veto, lawmakers have already refiled the bill in hopes that it will once again swiftly pass through the State House and Senate to land back on the governor’s desk, albeit with some changes expected to be added by Baker.

“I hope they can negotiate the differences and address them accordingly,” says Dennis Carlberg, Boston University’s associate vice president for sustainability and adjunct assistant professor of earth and environment, who is an energy conservation and sustainability leader in Boston and Massachusetts. “We have to move forward with this.”

In vetoing the bill, Baker outlined his concerns in a five-page letter to the Massachusetts Legislature, writing that despite being largely in agreement with the bill’s broad strokes, he had not yet had time to review it thoroughly and make necessary suggestions for him to sign on. His biggest issues with the bill as currently written? Baker says it doesn’t have strong enough protections in place for affordable housing, take into consideration future natural disasters and severe weather events caused by climate change, put in place clear language or funding to address the impact that climate mitigation will have on underserved communities, establish a framework for coordinating a clean energy plan with other states in the Northeast that share our regional power grid, follow key criteria established by the 2008 Global Warming Solutions Act, or make accomodations for the devastating toll that the coronavirus pandemic has taken on the state’s economy.

“In the coming days, I look forward to the opportunity to engage in a constructive, thoughtful dialogue on these important policy proposals with our partners in the Legislature to set the Commonwealth on a path for Net Zero by 2050 through aggressive, equitable and science-based climate action while protecting the state’s economy and most vulnerable residents,” Baker wrote.

But for many activists, Baker’s move to veto was a frustrating one. The bill had garnered support from many climate activist groups and environmental justice organizations, and, despite formally landing on Baker’s desk for his signature on January 4, 2021, has been under discussion since the summer of 2020. In December 2020, Baker’s administration outlined its own vision of climate legislation, which included slight variations from the proposed bill, including a change to how the state would measure carbon emission milestones within the next 30 years. Carlberg says both proposed paths forward are aimed at addressing a necessary update to the state’s landmark Global Warming Solutions Act, which has surpassed its target date of lasting through 2020.

The Brink asked Carlberg to explain the differences between the proposed bill and Baker’s own vision for climate legislation, and where the state’s policymakers must go from here to meet the state’s long-standing sustainability and emission reduction goals.

The Brink: What was your reaction when the proposed climate bill first passed through the Massachusetts House and Senate chambers earlier this month?

Carlberg: At a minimum, [the bill] is a necessary step for the commonwealth to meet the requirements [established by] the Global Warming Solutions Act and keep up with the progress that was made before those regulations expire. That state law has been very effective in getting [Massachusetts] to move forward in a very positive, active way to move the economy and reduce our impacts on climate change. The newly proposed bill continues to ratchet up those goals and take advantage of all the lessons that have been learned since 2008 for how to build a clean energy economy. [This bill represents] the future, this is what we need to be doing for the climate to avoid the worst impacts on human health and equity.

Are there areas for improvement within the proposed—and now vetoed—bill?

There are always areas for improvement, but it’s an ambitious bill and it’s not too different from what Governor Baker proposed.

What are the key differences?

The biggest one is the 2030 interim goal. There is a 5 percentage point difference in the [targeted milestone for reducing emissions by 2030]. House and Senate negotiators proposed that 2030 emissions be at least 50 percent less than 1990 emissions levels, while the Baker administration proposed a 2030 target of a 45 percent reduction from 1990 emissions levels. The ultimate goal is to be carbon free by 2050, so Governor Baker’s proposal would still be a good step forward, but the legislature’s target is more in line with what the science is telling us needs to be done this decade.

What are the most crucial aspects of the vetoed bill that you would still like to see pass into law?

There are three important positive steps that the bill proposed. First, it would codify environmental justice definitions into Massachusetts state law for the first time. These definitions are critically important to strengthen environmental protections for [vulnerable] communities of color or low-income communities, which typically take the brunt of environmental impacts that society brings about, such as the effects of pollution, urban heat buildup, and sea level rise.

Second, the vetoed bill called for a net-zero “stretch” building code, [which offers a more aggressive path forward]. Stretch codes give cities and states the ability to accelerate actions focused on reducing energy consumption and reducing greenhouse gas emissions through buildings and new construction. Currently, the state offers a stretch building code that has 20 percent better energy efficiency [regulations] than the state’s baseline [building] code requires—so communities can adopt and enforce the stretch code to use for new construction if they choose to.

If you look at Boston, two thirds of the city’s emissions come from buildings, so we know we need to address this very sector robustly to meet the net-zero emissions goal by 2050. It’s important to remember that homeowners and renters are typically paying their own utilities. [An aggressive, net-zero emissions stretch code] can bring huge savings for them, because buildings [in communities that adopt those guidelines] would be more energy efficient. The stretch code that the vetoed bill proposed would give municipalities greater control over the quality and efficiency over construction projects, and would result in more developers constructing buildings that are fossil-fuel-free, like BU’s Center for Computing & Data Sciences and many other buildings around the city designed to be carbon neutral. We need communities, developers, and other institutions to show leadership in the building sector throughout the commonwealth.

Legislation like this, if passed into law, will impact how we address renewables in 15 years when the contract for BU Wind expires. In the case of BU Wind, we receive and retire the Renewable Energy Certificates [RECs]—which are essentially the currency of renewable energy—generated from the wind farm in South Dakota. The electricity is delivered to the grid in the Midwest and doesn’t make it to New England. But the important thing is the University receives the RECs for each megawatt hour generated and earns these legal credits against our own carbon emissions in Boston. We chose a 15-year contract with the expectation that [when it expires] the renewable energy landscape here and globally will be quite different than it is today, and the grid in Massachusetts will be much greener than it is today. Just how much greener really depends on the legislation.