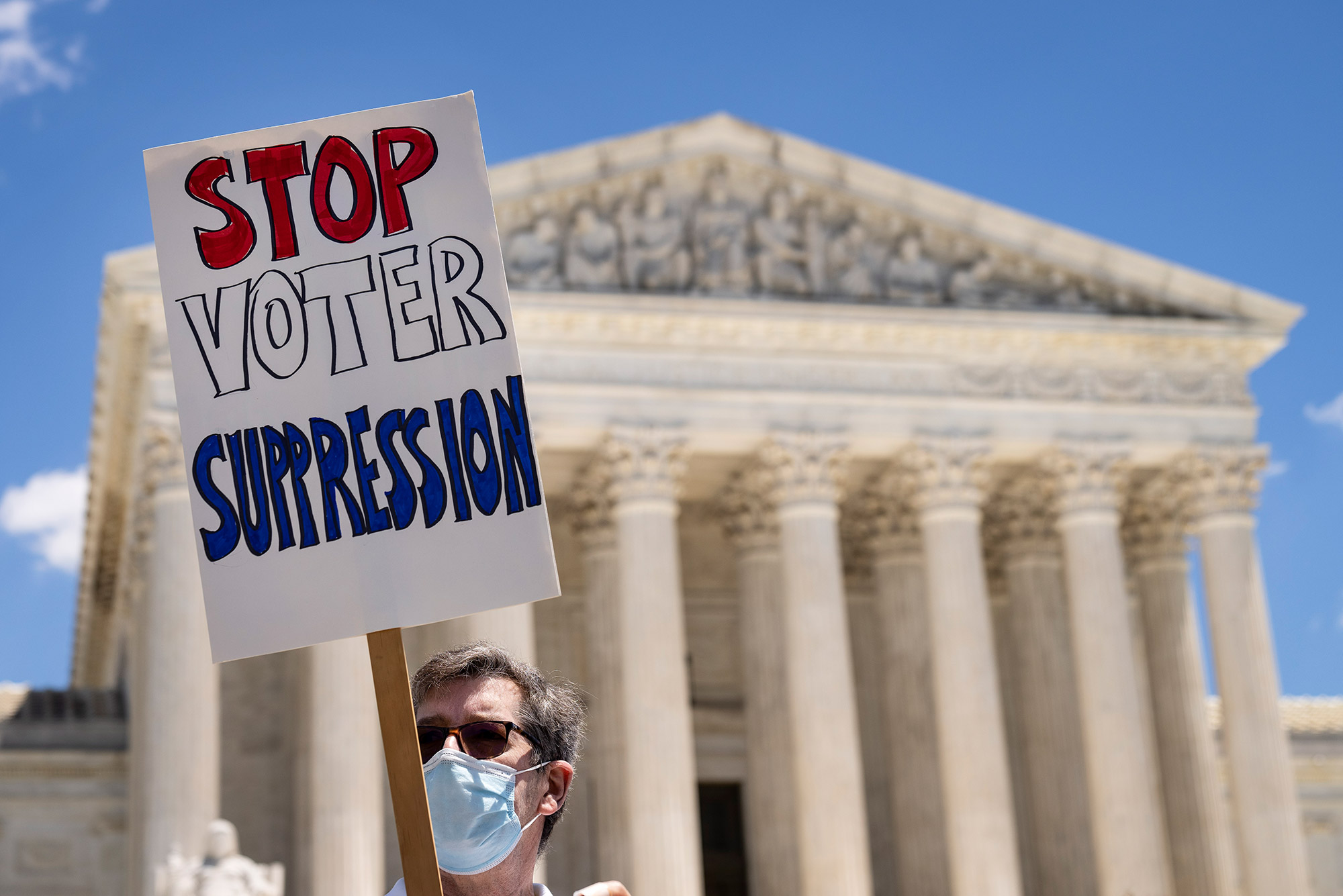 Organized by the Poor People’s Campaign, activists rally outside the Supreme Court on June 23, calling on legislators to eliminate the filibuster and pass the For the People voting rights bill. Photo by Drew Angerer/Getty Images

The Supreme Court on Thursday put down a challenge to two controversial voting restrictions in Arizona, in a 6-3 decision that gives a foreboding signal to voting rights advocates in the current  polarized political environment.

Robert Tsai, a School of Law professor and a Law Alumni Scholar, says the decision makes clear a pathway for creating voting restrictions that will stand up at the court.

The court’s decision in Brnovich v. Democratic National Committee upheld two restrictions, one requiring election officials to discard the ballots of citizens who vote at the wrong precinct and the other outlawing collection of ballots by campaign workers and others for delivery to polling places, a practice known as “ballot harvesting.” The DNC challenged both rules, saying they would disproportionately affect minority voters.

But SCOTUS overturned the US Court of Appeals for the Ninth District, in San Francisco, striking down the challenges, with the court’s three liberal justices dissenting. Most observers said this was bad news for the Voting Rights Act of 1965, already hobbled by a court decision in 2013.

BU Today asked Tsai what the decision means for Arizona and why it matters in the longer term for all Americans.

BU Today: What does the court’s decision mean in the narrow framework of this particular case?

Robert Tsai: We had a legal controversy concerning whether the two changes to Arizona’s election law were consistent with the Voting Rights Act of 1965. This decision upholds both provisions. The Voting Rights Act has a lot of important history surrounding it, of course. It was enacted by Congress after a major push by Lyndon Baines Johnson, after bloody attacks on civil rights workers, to ensure equal access to the vote and to ensure that there is no discrimination on the basis of race. What the court has said is that neither of the provisions impairs the exercise of voting rights or represents racial discrimination in any way that the Voting Rights Act can do anything about.

This is going to create incentives for other jurisdictions that want to enact voting restrictions to write what appear to be facially neutral restrictions but, either alone or with other provisions, make it much harder to vote.

But the challengers’ point is that the people affected by these provisions tend to be poor, tend, in Arizona, to be Latino or Native American, and are likely to be disproportionately affected, right?

You’re right. They argued that these provisions violated the Voting Rights Act because there was a discriminatory purpose, and even if there wasn’t, it had a disproportionate impact on people of color. One of the complexities surrounding the statutes is [the question], what are the standards required to find a violation? As you might imagine, this is where the justices’ ideologies matter. There has been a long-term project among some of the more conservative members of this court, going back decades, to narrow the reach of the Voting Rights Act. There are several techniques for doing this, and one of them has been to require finding of some discriminatory purpose, some nefarious motivation to impair rights or discriminate against some group in particular. [Justice Samuel] Alito’s [majority] opinion in this case is consistent with that long-term project, rather than what the challengers wanted and the lower court had focused on: a goal of providing equal access, which requires looking at the effects.

So what does this tell us about the future of other voting rights cases that may come before the court?

It’s a terrible decision. When you put it together with the 2013 case, you essentially see the court incentivizing states and local governments. A lot of different jurisdictions have the power to regulate different aspects of how the vote gets exercised—states, county boards. As we’ve seen lately, a lot of obscure actors come to play in deciding who gets to be a winner. These two provisions are neutral on their face. They don’t make the mistake of obviously and explicitly using race as a basis. Alito’s opinion seizes on that neutrality, shall we say, as the reason why they should get upheld. This is going to create incentives for other jurisdictions that want to enact voting restrictions to write what appear to be facially neutral restrictions, but either alone or with other provisions, make it much harder to vote.