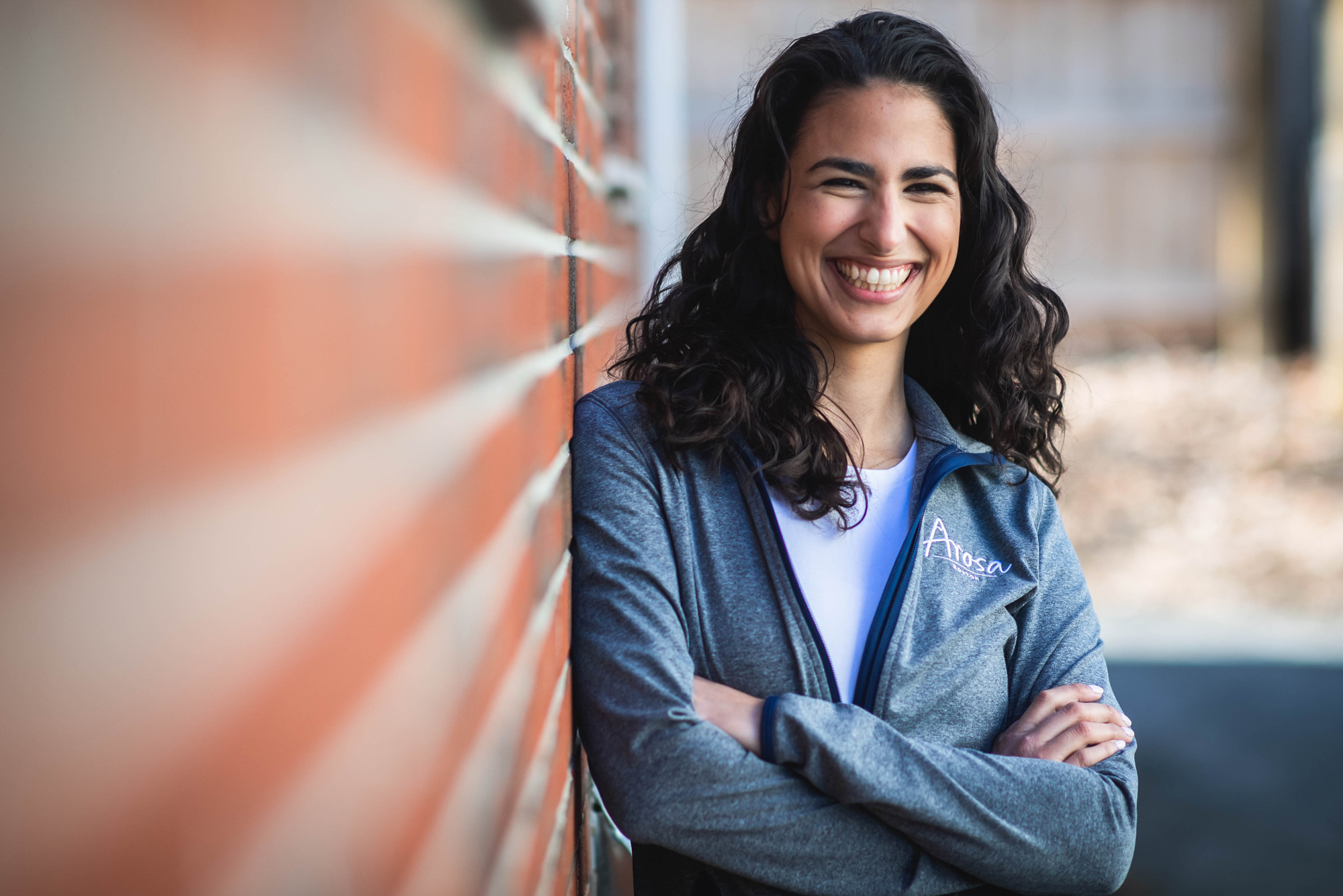 Since last year, Gaby Yidi (SHA’14) has been the Boston area director overseeing more than 200 employees for Arosa, a home-care company for seniors. Photo by Jackie Ricciardi

The idea: provide a head start on opportunities in a fast-growing field

“I’d wanted to do seniors housing as a career since I was 14 or 15,” says Serena Lipton.

“We had to do volunteer hours when I was in high school, and I chose to start off volunteering at the place where my great-aunt was living, a Hebrew senior rehab,” says Lipton (SHA’18,’23). “Even after she passed away, I never wanted to stop volunteering there. It ended up becoming an internship. I worked there and at other senior facilities through high school. And I kind of knew this was what I wanted to do the rest of my life.”

She is now an analyst in the seniors housing valuation advisory at the New York offices of global real estate services firm JLL, one of numerous School of Hospitality Administration grads now making their career in the rapidly growing senior living industry. To meet the demand for skilled leadership and staff, this fall SHA will debut a senior living concentration in its Master of Management in Hospitality program. And Lipton was the first student to sign up.

The idea is to give students what they need to succeed in a booming field that also meets the increasing interest in socially conscious “helper” careers. “There’s such great growth, that’s one of the benefits of this niche,” says Leora Lanz, an SHA associate professor of the practice and master’s program faculty chair. “But the other one is that for those who want to do something good, there’s an altruistic purpose here also.”

More than 70 million Baby Boomers were born between 1946 and 1964, and by 2030, all of them will be 65 or older. No wonder senior living is a rapidly growing business. The Baby Boomer generation all but invented mass consumer culture, so it’s no surprise they want different things from senior living than previous retirees.

“They don’t want to just sit there all day watching TV,” says Arun Upneja, dean of SHA. “They want an active lifestyle, adventure, good food, good company, great experiences, they want so many other things. Lines have blurred between senior care and our notion of traditional hospitality. There’s a lot of opportunity there for our students to shape the industry going forward.

“When you get into senior living, what a lot of people think about is nursing home care or medical care. That’s not what we are going for,” he adds. “These people have the ability to move around, they are driving their own cars. These are people with very active needs.”

The new concentration also comes at a time when traditional hospitality is in flux because of the pandemic, as COVID fears have sent hotel occupancy rates plummeting and shuttered many restaurants. Lanz and Upneja say a comeback looms, but that the new senior living concentration could seem a more secure field for some students at the moment. “Whether there was a pandemic or not, this was on our radar,” Lanz says. “It just catapulted us to making it happen even faster.”

Lipton says she had been told during high school that “if I was serious about seniors housing, you should major in hospitality.” She remembers telling Upneja about her goal during the SHA application process, an unusual choice at the time. It’s a conversation they still joke about today.

“When I had just graduated from SHA, a professor reached out to me and said they had found somebody looking for senior care talent,” she says. Now she does financial underwriting and market feasibility studies for senior care properties and portfolios. “I’m applying the skills that I learned in my hospitality finance class and my leadership class every day,” Lipton says.

She’s excited about the new concentration, and plans to study part-time while continuing to work at JLL. “I want to help the program from the inside out,” she says, and her plan is to help it grow from the outside after she has her degree.

Gaby Yidi used to meet celebrities like Leonardo DiCaprio and George Clooney in her days as a concierge at luxury hotels in New York and Miami. But since last May, she’s been the Boston area director overseeing more than 200 employees for Arosa, a senior home-care company with 25 offices in eight states. “I quickly realized it was way more rewarding than getting celebrities into clubs,” Yidi (SHA’14) says.

“By 30, I wanted to be a general manager of a hotel, and now I’m completely mission-driven. I want to make as many people happy as I can,” she says. “Being mission-driven and selfless and patient has really turned my world upside down. I am now giving my clients and their families the best aging-in-place experience in the most meaningful time in their life.”

Recruited by Arosa after the hotel industry mostly went on hold in the pandemic, she has found some other key differences from her high-end hotel experience. “I have a 9-to-5 job now, which I never had in hospitality, except maybe in sales,” she says.

There’s a lot of opportunity there for our students to shape the industry going forward.

Yidi says seven more hospitality veterans have been hired as leaders at Arosa since she signed on last May. But switching fields to senior living has been meaningful for her in ways that go beyond the balance sheet.

“My grandmother was 107 years old, and she passed away right before I signed on for this job, which was wild,” says Yidi, a Miami native. “She had someone living with her in Colombia full-time, someone taking care of her and giving her the best well-being, so we could experience the best last memories with her. I mean, how much more rewarding is that? That’s how I see this job now.

“I told my mentor at SHA, [clinical assistant professor] Suzanne Bagnera, and she’s like, ‘If that’s not a sign, I don’t know what is.’”

As a full-time one-year program, the concentration will require four courses in the fall offering a foundation in finance, marketing, business operations, and leadership. In the spring, students will take three concentration-specific courses: Senior Living Operations, Monitoring the Resident Journey Experience, and The Business of Seniors Housing. They’ll also take a fourth class, chosen from a menu of courses at SHA, the School of Social Work, and the School of Public Health, such as Social Policy and Programs in Aging (SSW) or Individual, Community, and Population Health (SPH). Part-time students can spread the work over two years.

The courses from other schools are offered so senior living students can better understand issues and skills specific to the older population and coordinate with the more care-oriented parts of the senior living industry as needed. Senior living also has aspects, such as dealing with residents’ families, that don’t necessarily come into play for staff of the local Hampton Inn.

“It is an incredibly growing industry providing services to a population that is growing exponentially,” says Kathryn Sweeney (MET’86), cofounder and managing partner of Blue Moon Capital Partners, a private equity firm with $2 billion under management invested in 30 different senior living properties nationwide, with approximately 4,000 units.

The different style of the Baby Boomers is “why we need fresh thinkers coming into this space,” Sweeney says. “The senior housing of today has been housing for the Greatest Generation, also called the Slent Generation, who are not accustomed to Starbucks and asking for what they want. They were happy with what they had. Fast forward to the Baby Boomers, and we are demanding and want what we want, and we don’t mind paying for it.”

Pre-pandemic, the senior living industry was already recruiting talent from the hospitality field, Lanz says. After word of the program reached the industry, SHA got calls from a dozen senior living companies in just one week, asking how to reach students “and we hadn’t started the program yet,” she says.

“We are trying to redefine what it means to be in the hospitality business,” Upneja says. “Hospitality was for many years very narrowly defined as hotels and restaurants and food service. But if we might have pigeonholed ourselves into these narrow fields, the students didn’t pigeonhole themselves. They were going into marketing, into advertising, into technology companies.

“We initiated a strategic rethink and said, let’s look at what our school should be about,” he says. “This is a perfect industry for us. There is real estate and hospitality and food and a social mission. This is tailor-made for our school.”

Lipton looks forward to using what she learns in the master’s program to be even better in her current job, but she admits to another dream somewhere far down the road.

“I want to own a converted colonial mansion that is a senior living community,” she says with a smile. “So many of my friends love little kids and wanted to go into education. I always felt that we have so much to learn from senior citizens, I just thought it was such a gift, being able to work closely with them. They understand the world in a way we don’t.”

For more information or to apply for the senior living concentration, visit its web page. The application deadline for the fall semester is May 15.