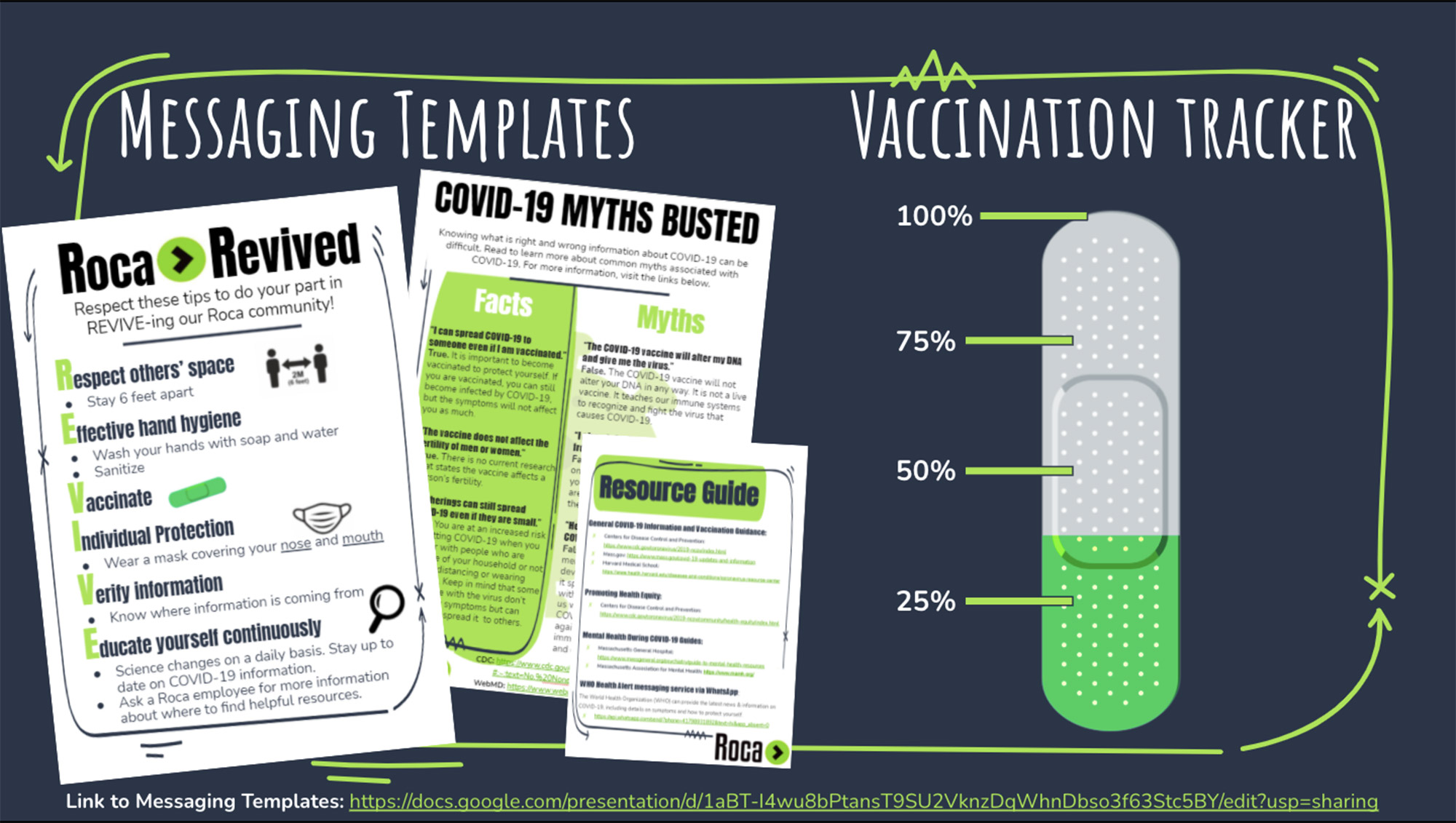 This summer, Iraqi and American university students collaborated in a virtual program hosted by United Planet to work on solutions to public health inequities. The 12 student teams were assigned a final project with a US or Iraqi nonprofit. Team five, which included Kayleen Panlilio (Sargent’23)—one of 24 Sargent students involved in the exchange—and Adelphi University’s Victoria Bruchhauser, addressed adherence to COVID-19 protocols for local nonprofit Roca. Courtesy of United Planet

How did you spend your pandemic summer?

If you were one of the two dozen Sargent College of Health & Rehabilitation Sciences students who signed up for United Planet’s Iraqi-American public health exchange program, you worked to come up with solutions to public health crises in the United States and Iraq.

In normal years, the nonprofit United Planet hosts internship and volunteer programs in more than 30 countries. Participants can sign up for a range of opportunities, from weeklong programs to gap year experiences. During the pandemic, however, United Planet switched to virtual offerings.

Among them was this summer’s virtual public health exchange, a partnership between United Planet and Sargent that brought together 120 college students from across the United States and Iraq. The program, which grew out of the COVID-19 pandemic, was funded by a grant from the US Embassy in Baghdad. For seven weeks in July and August, the students met in teams to learn about and address pressing public health issues in both countries.

“The main goal of the program is really cross-cultural communication,” says Nancy Lowenstein (Sargent’87), a Sargent clinical associate professor and program director of the behavior and health department, who helped oversee the program. “Students learn about another culture, as well as how COVID-19 has impacted each of these different places.”

This is the second year United Planet has run the program. The curriculum was developed by Shelley Brown (SPH’07), a Sargent clinical assistant professor of health sciences. Each week, students covered a new topic, such as the foundation of global public health or the micro and macro impacts of individuals in public health. They had weekly readings, which they would later post discussion questions about on Moodle. For the final projects, teams were paired with a nonprofit in either Massachusetts or Iraq and tasked with finding solutions to a unique public health issue—usually COVID-19–related—faced by that organization.

Fortuitously, the project gave Lee a chance to flex her OT muscles. “Occupational therapy is, in simple terms, about restoring an individual’s, group’s, or community’s participation in society after a crisis such as an accident, or even something drastic like a global pandemic,” Lee explains. “The project that we worked on, and some of our solutions for reducing vaccine hesitancy, reflected OT, with its focus on listening to the community members’ stories and getting to know their specific conditions before prescribing a remedy.”

Among the other American-based students was team five captain Victoria Bruchhauser, an Adelphi University nursing student. Her group’s final project focused on promoting adherence to COVID-19 protocols in Lynn and Chelsea for Roca, a youth-focused nonprofit with locations in Massachusetts and Baltimore. The international reach of the summer program is what drew Bruchhauser to United Planet, she says.

“With nursing—and with health care in general—I think it’s important to be aware of what’s going on in the world, because you’re treating all kinds of patients,” Bruchhauser says.

Her team was extra-international. Members were located in three countries, with three different time zones: the United States, Iraq, and Kazakhstan. Team discussions—which required finding a time that worked for all nine of them—often went “a little off the side road,” because they all enjoyed chatting with one another, Bruchhauser says. “A lot of us actually met outside of the program to keep talking. It was really cool learning from each other.”

That sentiment was echoed by Fadi Azeez, a senior majoring in English language and literature at the Catholic University in Erbil, Iraq, who signed up for the United Planet program because of his interest in the health sector. “This pandemic has limited our activities so much, and it felt as if life has changed a lot,” says Azeez, whose group project focused on teen sexual behavior during lockdown. “The most enjoyable moments [of quarantine] were during this whole program, honestly, because it was so much fun and not boring at all.”

When it came to health disparities, the differences could be stark. As Bruchhauser’s cocaptain told her, vaccines were available in Iraq, but the chances of contracting COVID-19 from health-care facilities were high enough to prompt many Iraqis to remain unvaccinated. (Azeez also noted that medical equipment in the United States is typically much more sophisticated than in Iraq.) And forget clapping for health-care workers in the evening: in some cases, Bruchhauser’s team members told her, Iraqi citizens blamed doctors for coronavirus deaths and physically attacked them.

Some things, however, were much the same between the two countries. Misinformation, for one, is universal: for their final projects, three of the groups worked on a social media campaign addressing COVID-19 myths and vaccine hesitation for the United Iraqi Medical Society for Relief and Development. Their Kurdish/English campaign—which centered around a fictional character named Kamal—featured a hashtag, shareable social media graphics, and FAQs designed for Facebook stories.

For Lee, the opportunity to connect across borders—at a time when international travel is nearly impossible—was priceless. “The most enjoyable aspect about working with my Iraqi colleagues was learning about their Kurdish culture and language,” she says. “We also shared a few personal experiences that helped clarify cultural notions of America and Iraq, which was meaningful for me.”

As for cross-cultural communication? When her Iraqi colleagues taught her some basic phrases in Kurdish, Lee says, she spent a day practicing them on anyone who’d listen.