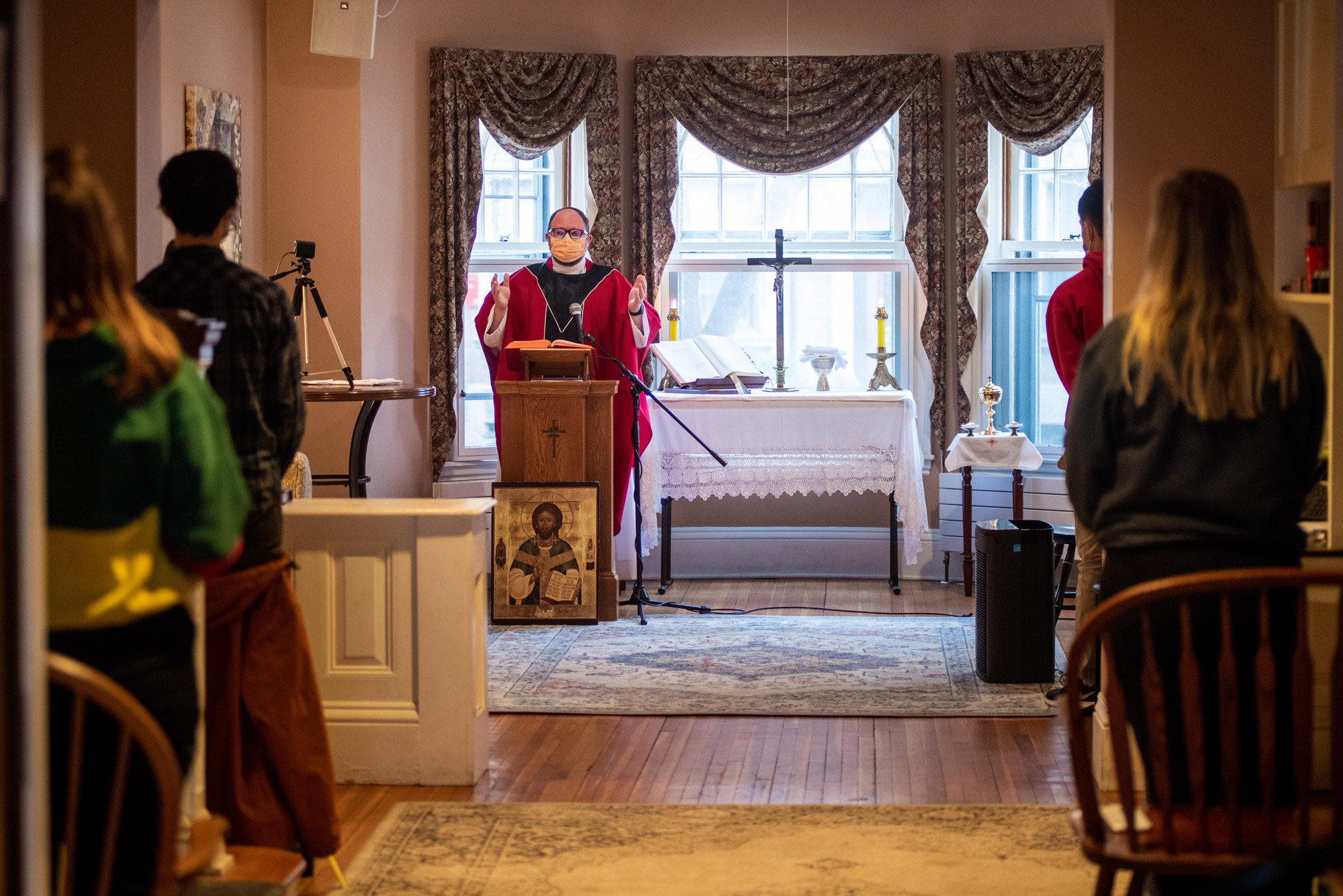 BU Catholics celebrated Palm Sunday as they have other Sundays since their usual worship space at Marsh Chapel closed for the pandemic: at the Catholic Center on Bay State Road.

But students, leaders across denominations long for return to in-person worship

In spring 2020, the 104-year-old widow of a former BU professor became one of Marsh Chapel’s first congregants to die from COVID-19. “We have not been able to gather” to memorialize her or others lost during the pandemic, as on-premises gathering remains suspended, Marsh Chapel Dean Robert Allan Hill laments one year later.

Yet while the virus forced what Hill calls “worshipping in diaspora” remotely on Sundays, the use of technology has grown participation in daily chapel rituals: Tuesday Bible study, Wednesday tai chi, Thursday yoga, Friday Buddhist meditation. These ”reached more people, different people, through those virtual seminars than we would have otherwise,” Hill says, so “it would not surprise me” if their online presence survives beyond the pandemic.

Marsh’s congregation is hardly alone in adjusting observance to the undulations of COVID’s rhythms a year into the pandemic. Jewish students read the scroll of Esther outdoors for Purim in February, celebrating her saving of Jews from a Persian official. Catholic masses relocated from their normal Marsh venue to the smaller BU Catholic Center. Muslims are weighing whether to observe Ramadan in person next month based on whether they’ve been vaccinated.

Zoom has become the new prayer space, along with the outdoors when the weather is accommodating. Given this nimble adjusting and the enhanced attendance from digital gatherings, Hill sums up the state of campus religion as “resilient and resurgent.”

Students, though, have had to adjust to stringent safety protocols that can make normally welcoming spaces seem like fortresses. The Catholic Center follows Archdiocese of Boston COVID protocols that can be stricter than the state’s, says Father Kevin Staley-Joyce, BU’s Catholic chaplain.

“Given that the Catholic Center building is not set up to function as a church, our masses this year have been quite limited,” he says. “Many students choose to attend mass at local parishes instead.” The center holds small weekday and Sunday masses “limited to current BU students and by sign-up only,” he says. “We ask students to attest to having a green symptom badge, along with keeping up with their usual COVID testing regimen.”

Arriving as the new Catholic chaplain last fall amid a once-in-a-century health emergency, Staley-Joyce relied on his prior experience for a soft landing on campus: he’d been a chaplain to COVID-19 patients at several Boston hospitals. One of 20 priests quarantined between March and June 2020 so they could bring the sacraments to patients, he says he “was fortunate to have been given helpful training and perspective relating to infection controls.”

This year, 2021, marks the second pandemic observance for some of the Abrahamic faiths’ most sacred days: Passover (which began at sundown March 27), Easter (April 4), and Ramadan (April 12 to May 12). For BU Catholics, Easter will be celebrated at St. Stephen’s in Boston’s North End, “a bit of a pilgrimage logistically for the students, but we’ll be able to have the church reserved just for the BU community,” Staley-Joyce says.

BU Hillel, the center of campus Jewish life, is hosting several Zoom seders for Passover and also provided students $15 each to cover the costs of hosting their own seder with their COVID-proofed pods of friends.

Ramadan, the observance of the Prophet Muhammad receiving the revealed Koran, “is not going to be back to normal,” says Reem Shaikh, BU’s Muslim chaplain. Pre-pandemic normal included taraweeh (night prayers) and community iftars (meals to break Ramadan’s daily fast). “We still have to be wary and careful of large gatherings and congregations” this year, Shaikh says, adding that whether people have been vaccinated may determine whether they can pray and break their fast together in person.

Worshipping in creation and online

With outdoors being safer for people gathering than indoors, Hill has led a  40-minute 8 am worship service on the first Sunday of each month on Marsh Plaza, with COVID protocols, “no matter the temperature. March 7, yes. February 7—cold, yes.” (Easter Sunday’s sunrise service starts at 7:30.)

But he salutes Hillel for being “really creative” in taking advantage of the outdoors. The Hillel website details how creative: “We were proud to have held around 1,500 one-on-one meetings with students this past fall, and welcomed nearly 5,000 program attendances. We mentored 150 BLT [BUjewish Leadership Team] student leaders, hosted 150 students in semester-long Jewish Learning Fellowship [JLF] classes [and] offered 25 Rosh Hashanah and Yom Kippur events, meals, and services. We also offered a sukkah [temporary hut] on campus for student use” during the fall festival of Sukkot.

Still, cyberspace has been as vital as creation space to the devout.

We are looking forward to the day—in my lifetime—when we will be together to sing.

As campus emptied in the pandemic’s early days, the BU Hindu Students Council had to cancel 2020’s Holi festival, celebrating spring and the triumph of good, as well as two pujas (prayer services), says council executive board member Sawan Patel (CAS’22). Last fall, the council began posting its pujas and other events online; in particular, intimate prayers replaced the dancing, music, and food with which students typically celebrate Diwali, the festival of lights.

Videoconferencing also enabled Hindu students to raise money for a water project in Kenya overseen by Engineers Without Borders at BU and to support international students struggling during the pandemic-created recession.

“It certainly is disappointing that we haven’t been able to congregate with our fellow board members and the larger community at BU in person,” Patel says. “Considering the larger Hindu community, we have noticed a downturn in attendance at our pujas dating back to last March.”

“It’s hard to continue virtual activities, especially when the entire week, students have been burnt out on Zoom to begin with” after online coursework, explains fellow executive board member Meera Patel (Sargent’21).

Shaikh, the Muslim chaplain, notices the same problem: “The virtual life has become more familiar to students, but I would not say it has become easier. It has probably become more difficult.”

Before the pandemic, congregants who couldn’t attend Marsh’s Sunday service in person could listen online or by tuning in to WBUR, the University’s National Public Radio station. That listening experience wasn’t markedly different from the COVID-adjusted routine of the last year, Hill says, though his live Sunday sermon has been replaced: he records it midweek for insertion in a package of archived music and liturgy that’s broadcast as a whole on WBUR on Sundays.

“Preaching to an empty sanctuary is like swimming underwater,” he says. “We are looking forward to the day—in my lifetime,” he adds with a chuckle—”when we will be together to sing.

“In terms of when, we abide by the policy, direction, and guidance of University leadership,” which has announced the intention to return to on-campus learning without social distancing this fall. Asked if that’s Marsh’s reopening target by default, Hill’s reply: “You know the phrase from your lips to God’s ears?

“I’ve had a year, as we all have, of thinking I can see around corners—and then I can’t see around the corner. ‘Tentatively’ has become a big part of the vocabulary.”

Religious Life at BU Is “Resilient and Resurgent,” despite Pandemic
0
share this