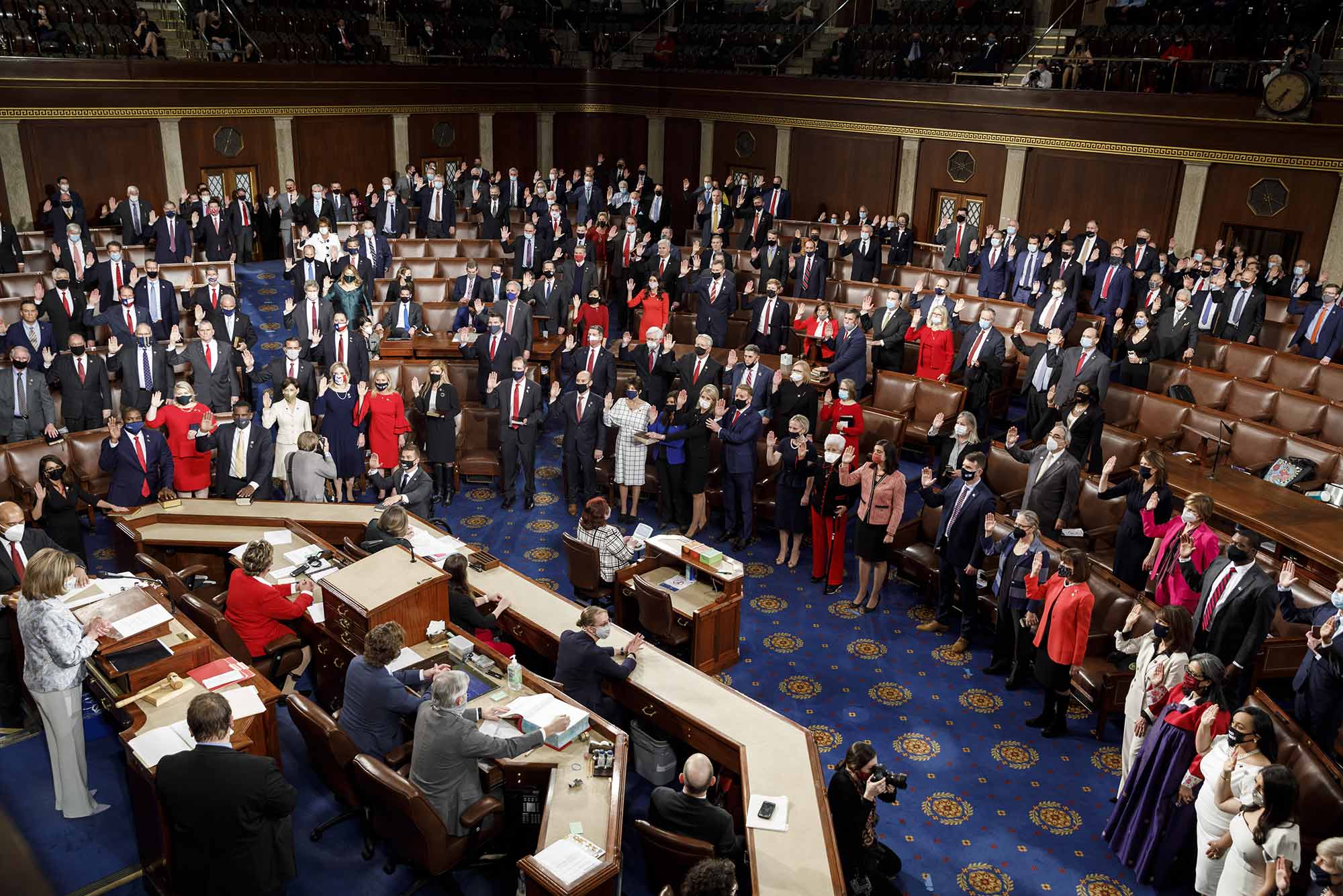 On January 3, 2021, House Speaker Nancy Pelosi (D-Calif.) swore in new members of the 117th Congress. Women make up 27 percent of the current members, the highest percentage in US history, but still considerably less than the percentage of women in the country’s overall population. Photo by Ting Shen/Bloomberg via Getty Images

What Took You So Long? BU Political Scientist Virginia Sapiro on Record Number of Women in Congress

More than a century after the 19th Amendment passed, US politics lags behind 66 other countries in gender equality

So why isn’t Boston University feminist political scientist Virginia Sapiro shouting from the rooftops about so much political history being made?

Sapiro, a College of Arts & Sciences professor of political science and Arts & Sciences dean emerita, is an expert on gender in politics, which she explored in her spring 2020 class The 19th Amendment Centennial: A Lens for Gender & Empowerment. Here’s her take on the landscape for women in US politics in 2021, more than a century after they won the right to vote: “What took you so long?”

Sapiro drives home her point with a cache of data-packed PowerPoint slides that she says never fail to stun her audience, whether they’re students or community members: when it comes to women’s representation in other countries’ national legislative bodies, the United States ranks 67th—that’s behind Mexico, Finland, Sweden, Italy, the United Kingdom, and 61 other countries.

BU Today talked with Sapiro about the gains women have—and haven’t—made in US politics.

BU Today: Why aren’t you more excited about women now accounting for a record 27 percent of Congress?

Sapiro: A century after the 19th Amendment was ratified, so many people are crowing about reaching the point where a quarter of the people in Congress are women. So, no, I’m not very impressed. I’m very pleased when we get one of those little bumps, which often come for a variety of reasons, mostly when women reach a point of frustration where they start organizing themselves because of things that are going on. A quarter of the members of Congress is pretty good, but if your standard is equality and justice, it’s not terribly impressive.

BU Today: Why are people so surprised when you tell them how far behind other countries the United States is in terms of women in Congress or its equivalent?

Sapiro: I think most people don’t realize how far behind we are in a lot of places. And of course they’re feeling the experience of one of those little bumps in the election of women—there were so few women before, so each increase is noticeable. When you get the very first woman in history who is the vice president of the United States, we’re likely to notice that just because we’ve never had one before. Someday, if we have a woman as president, we’ll notice that too.

But notice that of the many, many countries that are ahead of the United States, a very large number of them are not democracies. Getting women into office doesn’t necessarily mean that being a country that is not very democratic is now more democratic. If getting into office isn’t based on democratic processes, but just, let’s say, on whether the people in power really like you, or being a relative of the person in power, or being the offspring of the previous leader, then having more women in office isn’t a move toward democracy.

A lot of countries have instituted policies that would facilitate getting more women into office because they see that as an important step forward for their democracy. Consider the Scandinavian countries that in general are less patriarchal than others and that have had more gender equality in a wide range of ways. They were among the earlier countries to extend the right to vote to women, and to develop policies that could support women being in the workforce—childcare, kindergarten, that kind of thing. They and many countries that followed have adopted various forms of gender quotas that usually specify something like a requirement that the gender imbalance in office should not be worse than 40/60. The reasoning is that because of the way most places’ cultures worked, men were not going to give up their power to women…and that you needed particular policies, not just good words, that would encourage increasing the number of women.

In some countries, gender quotas are not matters of public policy, but of party policy. For example, in party list countries, when they develop their list of candidates, their lists must represent an appropriate gender balance.

BU Today: Why are other countries accepting and promoting gender quotas and we’re not?

Sapiro: This is what gives political scientists a job—so we can research these questions deeply and figure it out. But even just taking the set of democracies, the different political cultures have different understandings of how we define equality or freedom or democracy. Even different democracies define democracy differently. We have different tolerance for different kinds of problems in the system and we have different ideas about what we have to clean up to make ourselves more democratic. So, for example, people in a lot of democratic countries point out the United States is the only one on Earth that has this crazy Electoral College. They look at our system that allows gerrymandering or the fact that we make it harder to vote than in lots of other democracies. They ask how can Americans possibly think that they’re democratic when they have a system where the majority vote doesn’t win? Or where it’s so hard for citizens to get to vote?

Remember, for most of our history, Americans called ourselves democratic—even though women were not allowed to vote and Black people could be lynched for trying.

BU Today: You said last year in your class on women’s suffrage that the exclusion of women still remains widely unremarkable. Why is that?

Sapiro: How many of us in school, when we were learning about democracy, were asked to grapple with the fact that for so long, half the population—no matter how wealthy, what race, where you live—couldn’t vote? Or that, up until the end of the 1840s, married women could neither own property nor seek jobs without their husband’s permission. If a woman left her husband, the children belonged to the husband. A woman could take away, if she left, only the clothes on her back, no matter how wealthy her parents were—have we grappled with that?

Even though we’ve become considerably more democratic, and most Americans, even the most conservative, would be really shocked at the idea of saying women couldn’t vote, I didn’t hear people saying, “Wow, what an undemocratic country we have now that women are only a quarter of the people in Congress.”

BU Today: Are you impressed by the fact that we have a woman vice president?

BU Today: Do you think we’ll have a woman as president in your lifetime?

Sapiro: I briefly thought so as 2016 approached, and of course, the woman candidate got the majority of the vote. But when Hillary Clinton was defeated, I decided at that point I probably never would see one in my lifetime. I think it would have been really nice to see. But they better hustle because I’m 70.