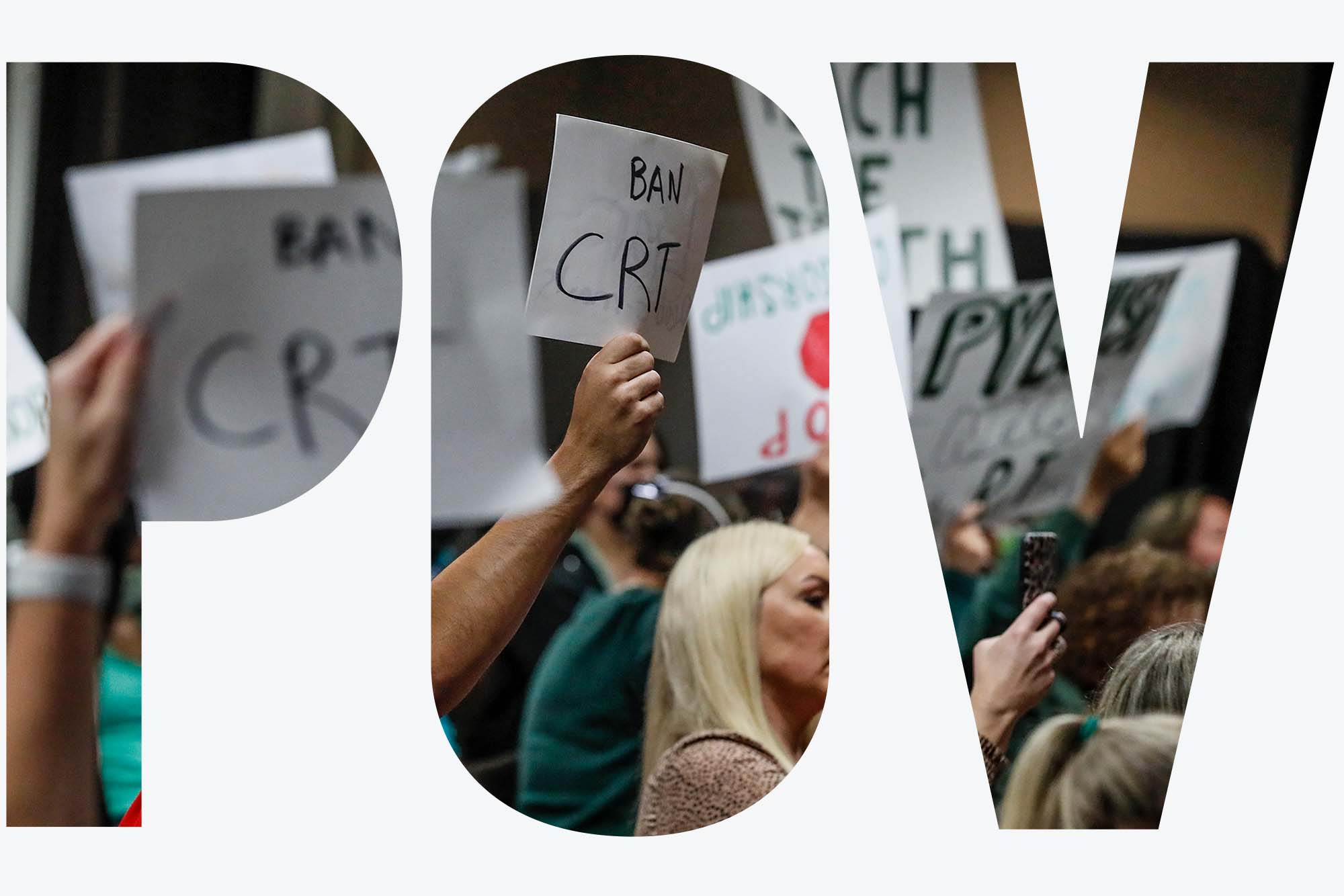 Since the final months of the Trump administration, the Republican Party has waged a sustained assault on critical race theory. Otherwise known as “CRT,” this academic framework offers tools to illuminate the relationship among race, racism, and the law. Through calculated caricature and distortion, right-wing think tanks and media have weaponized CRT to manufacture a culture war that recasts antiracism as the new racism.

It appears to be working. Anti-CRT messaging has emerged as a signature—and potent—GOP political talking point. US Senator Joni Ernst (R-Iowa), for example, repeated a common refrain when she asserted the falsehood that “critical race theory teaches people to judge others based on race, gender, or sexual identity, rather than the content of their character.” More recently in Virginia, Republican Governor-elect Glenn Youngkin closed his campaign with a pledge to “ban critical race theory on Day One.”

Pundits may have overstated CRT’s impact in Virginia and beyond. But Youngkin’s success cemented CRT as a favorite foil in the Republican playbook.

On the legislative front, between January and September 2021, Republicans invoked similar anti-CRT rhetoric to justify 54 bills across 24 states. At least 11 are now law.

The mainstream media keeps characterizing these laws as “CRT bans.” This framing is understandable and inviting. But often it distorts reality by mischaracterizing the laws themselves. Most of these bills—if you take seriously their actual text—call for more CRT, not less.

Consider a bill recently passed by Wisconsin’s Republican-dominated state Assembly. The bill, which tracks legislation across the country, prohibits teachers from “teach[ing]” a series of banned “concepts.” This includes a ban against teaching that “[o]ne race or sex is inherently superior to another race or sex.”

Now imagine a 10th grade social studies class begins a unit on corporate America. The teacher opens with basic facts about Fortune 500 CEOs: 92.6 percent are white, 1 percent are Black, 3.4 percent are Latinx, and 2.4 percent are Asian. These disparities exist against a backdrop in which roughly 60 percent of the United States population is white, 14.2 percent is Black, 18.7 percent is Latinx, and 7.2 percent is Asian.

The teacher shares two additional facts: white men—roughly 35 percent of the population—hold 85.8 percent of CEO posts. Of the 83 women who have become CEOs since 2000, 72 were white, thereby comprising 86 percent of all female CEOs this century.

The statistics invite an inescapable question: why do such glaring disparities exist? One answer assumes today’s CEOs are the product of fair and unbiased systems that reward talent and hard work. This response implies that white men, relative to everyone else, and white women, relative to women of color, are simply more talented and harder workers. In effect, this story suggests that white men are inherently superior—the precise message that Wisconsin’s bill prohibits.

A different answer might explore whether the systems that produce CEOs are, in fact, fair and unbiased.

This is where CRT enters. Roughly 40 years ago, a group of legal scholars confronted a similar question: why do profound racial disparities persist even when the law prohibits racial discrimination?

The teacher in our example could bring this robust literature into her classroom. Doing so would comply with the Wisconsin bill and, importantly, enrich her students’ learning. She could, for example, assign writings from acclaimed critical race theorist Cheryl Harris, who exposed the often-invisible benefits whiteness can confer, even to poor white people.

Our teacher could then draw on professor Kimberlé Crenshaw, a CRT cofounder whose pathbreaking work urges us to explore how racism interacts with sexism, classism, and homophobia, among other dimensions of identity.

She could also turn to legal scholar Jerry Kang, who has outlined why implicit biases often lead individuals and institutions to discriminate—even when we hold earnest egalitarian commitments.

Though the specifics differ, the above scholars—and the collective CRT canon—offer a consistent insight: CEO white/male overrepresentation cannot be explained by some “inherent superiority” enjoyed by whites and men. Rather, contemporary disparities result, in large part, from race and gender—and often class—advantages and disadvantages embedded within the systems through which CEOs must pass.

For educators like me who have witnessed the benefits of a CRT-rich curriculum, it’s welcome news that anti-CRT lawmakers are proposing and passing pro-CRT laws—even if unintentional and counterintuitive.

But, in reality, these laws are unlikely to yield more CRT in classrooms—regardless of their actual language.

The GOP’s anti-CRT crusade, as with related campaigns targeting trans youth and mask mandates, has never been about facts—let alone concern for legal text. This is about power, and “anti-CRT” laws empower private and public actors to target teachers who engage in even basic conversations about race and racism.

A recent report from the free speech advocacy group PEN America captures this dynamic. After reviewing all 54 bills, PEN concluded: “These bills appear designed to chill academic and educational discussions and impose government dictates on teaching and learning. In short: They are educational gag orders.”

PEN further explained that even when bills do not become law, they “send a potent message that educators are being watched and that ideological redlines exist.”

In today’s toxic political climate, this translates to less CRT in the classroom, even when the law—and sound teaching—demands more.

Jonathan Feingold is a School of Law associate professor of law, whose scholarship explores the relationship between race, law, and the mind sciences. He can be reached at jfeingol@bu.edu.

This column originally appeared on The Conversation on November  30.

There are 3 comments on POV: What the Public Doesn’t Get: Anti–Critical Race Theory Lawmakers Are Passing Pro-CRT Laws

POV: What the Public Doesn’t Get: Anti–Critical Race Theory Lawmakers Are Passing Pro-CRT Laws
3
share this