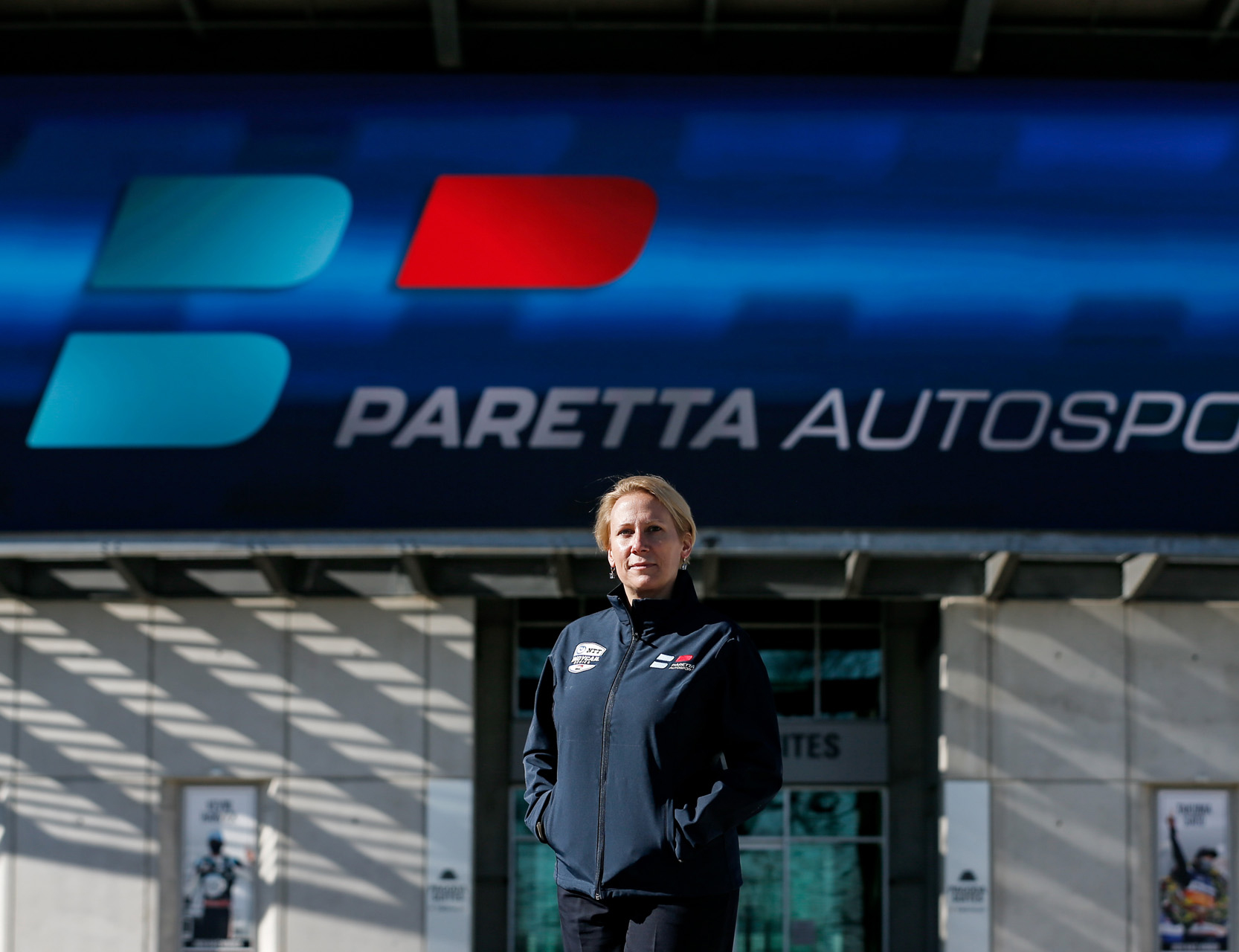 All eyes were on Paretta Autosport during their first pit stop at the 2021 Indianapolis 500 over Memorial Day weekend. As driver Simona De Silvestro slid into Paretta’s pit box, seven crew members hopped over the wall to get to work. In seconds, they fueled her up, changed her tires, and sent her rocketing back onto the track. The crowd went wild.

Under normal circumstances, pit stops are as eventful as a sneeze. But this wasn’t just any pit stop, and the crowd knew it. This was the first for the mostly female Paretta team, and the first ever at the Indy 500 with a pit crew almost entirely of women. In short, it was historic—and people were watching to see if they could pull it off.

“Everyone was sort of holding their breath, expecting either greatness or failure,” says Paretta Autosport founder and CEO Beth Paretta (COM’95), who’d been glued to her headset, listening to the chatter between the pit box and De Silvestro. “When Simona pulled out of the box, the crowd erupted to the point where I literally ripped off my headset because I was like, ‘What is that?’ And then I realized, oh my God, they’re cheering for us.”

Although Paretta Autosport didn’t make the podium (a technical issue forced De Silvestro out of the race with 30 laps to go), just being on the track that day was monumental—Sports Illustrated, People, the Wall Street Journal, ESPN, and CBS Evening News had covered Paretta and her history-making team ahead of the race. It was also years in the making: Paretta had made an unsuccessful attempt to enter the 2016 Indy 500 with the all-female team Grace Autosport, only for her loaner car to back out at the last minute. This time, she had help from the top: IndyCar owner Roger Penske’s Race for Equality and Change program.

The program’s goal is to bring diversity to every level of IndyCar and the Indianapolis Motor Speedway. That includes youth programming, contractors, and team owners like Paretta. As a participant, Paretta established a technical alliance with Team Penske (Penske’s own IndyCar operation, which holds an unprecedented 18 Indy 500 wins) that set up her soon-to-be 70-percent-female team with a car, loaner staff, and most important, a facility to train pit crew recruits.

But don’t think that means she got a free racing team—“Roger doesn’t give much away,” Paretta says with a laugh. “I’ve paid for every billable hour!”

The Indy 500 is the race in the NTT IndyCar Series. In nonpandemic times, it draws around 300,000 fans to the Indianapolis Motor Speedway every year, and averages around 5 million at-home viewers since NBC took over its broadcast in 2019. (NASCAR, which has five decades on IndyCar and a longer racing season, is more popular overall.) IndyCar’s open-cockpit cars can hit speeds of up to 240 mph—faster than NASCAR’s heavier, enclosed sedans. Other key differences: IndyCar races are usually shorter, feature fewer cars (33 versus 40), and tend to have smaller purses than NASCAR races. (There’s also Formula One racing, which uses open-cockpit cars similar to IndyCar’s, but it’s more popular overseas than in the States.)

Paretta’s IndyCar effort is on brand for the Connecticut native, who’s spent decades making her mark in male-dominated industries. She started out in skiing; she’d worked in New England ski shops since her teenage years back when she would take the trade mags home and read them cover to cover. After graduating from BU with a film degree (she’d planned to make documentaries), she headed to Burlington, Vt., where she worked for different ski companies and earned an MBA from the University of Vermont.

A fortuitous piece of advice changed her trajectory. “Ah, young, smarty-pants me—I remember reading a quote from Warren Buffett, where he said to never work in a weather-dependent industry,” Paretta says. “That led to a moment of reflection. I was like, ‘Okay, I have a degree in business; where am I going to pivot?’”

Paretta (in blue) established a technical alliance with IndyCar owner Roger Penske under his Race for Equality and Change program, which set up her 70-percent-female team with a car, loaner staff, and a facility to train pit crew recruits. Penske photo by Joe Skibinski; pit crew photo by Maria Grady

Paretta had always loved cars. Back when she was a kid, she spent plenty of time watching her dad and her older brother, Michael, restore a vintage truck in their garage. When Michael, her only sibling, was diagnosed with leukemia at age 12 and died five years later, her family’s world was upended. Cars became a “way to keep a dialogue with my dad,” Paretta says. “That was my logic as a six-year-old, but it’s a very common [coping mechanism] of surviving siblings.” She started subscribing to car magazines, and soon could name every car on the road. Racing, her other interest, became an escape; every time she turned on the TV and landed on NASCAR or Formula One—IndyCar hadn’t been founded yet—she was “mesmerized,” she says. “To a young girl with difficult things going on in her house, the colors, the sounds, and the rhythms of cars going around the track were soothing. It’s weird, because it’s loud and fast, but racing has always been my comfort. There’s still a level of that to this day.”

Making it to the racing world wasn’t a straight shot. First, she took a finance job with the Volkswagen Group—which represents Volkswagen, Audi, Bentley, and Lamborghini—helping dealerships stay in the black. That led to being recruited by Aston Martin, which put her in charge of operations for all North American dealerships east of the Mississippi River. She remained in that role for a few years, bouncing among her 19 dealerships and the Aston Martin factory in England. When she took time off, she’d usually head to Formula One races.

As a woman in the automotive industry who knew her stuff, she stood out, Paretta says. She was the only woman in her type of role at Aston Martin, which increased her visibility: at networking events, “you’d meet 10 Steves and 10 Daves in a day, but only one Beth—and people would remember that,” she says. So when Fiat Chrysler, on the hunt for a director to head a new street and racing technology subdivision, came knocking on her door, no one was surprised.

The company was fresh off an Italian-American merger that added the likes of Maserati, Ferrari, and Alfa Romeo to its portfolio of domestic truck brands, and thought Paretta was the perfect choice. She accepted. Suddenly the lifelong racing fan was running the business end of all racing programs for a major car conglomerate. It was a dream come true.

Until, that is, the company shut down its racing arm in 2015. “It was frustrating,” says Paretta, who’d helped usher Dodge to a landmark NASCAR victory in 2012. “It was like building a sandcastle and then having someone say, ‘Oh, we’re going to kick this over now.’”

But it was also a beginning.

Paretta has always loved cars and racing. When she left her job at Fiat Chrysler in 2015, she decided it was time to go big. Why not create her own racing team—and staff it with women? Photo by Brad Ziegler

“Women Can Do This Too”

When Paretta left Fiat Chrysler at the beginning of 2015, she decided it was time to go big. Instead of working on a racing division, why not create her own racing team—and staff it with women? And furthermore, why not start STEM—science, technology, engineering, and math—initiatives to get girls interested in the sport, and create pipelines for them to pursue careers in it?

“Working at car companies, I knew internally that there was a shortage of engineering talent [at the time],” explains Paretta, who’d long regretted that she hadn’t been encouraged to join STEM fields when she was younger. “A lot of companies were recruiting talent from colleges. But in order to create that trajectory, you have to start planting that seed in middle school. The idea of seeing 12 women standing in a line in matching crew uniforms and what that visual would do for someone sitting in the stands or at home—I wanted to put in front of everyone that women can do this too.”

Grace Autosport’s 2016 Indy 500 run would ultimately end before the race started. But the extracurricular arm that Paretta established under Grace is still going strong. In recent years, the team has hosted high schoolers at racing venues and participated in STEM conferences for women. Plus, Grace laid important groundwork for what would become Paretta Autosport.

“What Beth is doing is bigger than her, and bigger than the race team,” says Paretta’s lifelong best friend Stacey Bakaj. Paretta had recruited her friend to do design work and web development for Paretta Autosport. “It’s really a movement to shine a light on women starting careers in STEM and raise them up,” Bakaj says. “How successful she’s been at it is amazing—and no surprise to me.”

Paretta says she wants people to love racing as much as she does: “I’m hoping that if we transform the look and feel of who’s in the paddock and the driver’s seat—if people can see themselves—they might be more interested in watching.” Photos by Michael L. Levitt

Before joining the team, Bakaj had no motorsport experience beyond being occasionally dragged to races by her friend. It’s a common refrain among the rest of the staff, who Paretta and Team Penske pulled from all over. Only half of her pit crew recruits had previous pit experience. Outside rear tire changer Amanda Frayer is a former college athlete, initially recruited because she was fit enough to jump over the wall separating the track from the pit station. In a similar vein, business operations manager Belicia Montgomery, the director of diversity and inclusion at Major League Baseball and a previous mentee of Paretta’s, had recently worked her way up through the baseball organization when Paretta tapped her as a business consultant. (“I definitely never thought I would be part of a racing team,” Montgomery says, “but it has been awesome thus far!”)

Now? “All of these ladies are completely hooked,” says Paretta, who is planning her team’s next race. “They love racing now, and that’s really the secret behind why I’m doing all of this, beyond helping women achieve financial independence. I want people to love it as much as I do. I’m hoping that if we transform the look and feel of who’s in the paddock and the driver’s seat—if people can see themselves—they might be more interested in watching.”

There’s perhaps no better indicator of her success than a small moment ahead of the Indy 500 on Memorial Day weekend. Indianapolis-based racing fans Kelly Tingle and her seven-year-old daughter, Elena, were watching videos of the Paretta team and noticed that most of the women on the pit crew had their hair pulled back into ponytails with side braids. When Elena wanted a side braid, too, mom was happy to oblige and threw a picture on Twitter, catching the attention of Paretta and local news station WISH-TV.

When Elena was interviewed by the station, the impact Paretta Autosport had was clear: “Sometimes girls think they can’t do things that are really big, and men can, and I don’t really know why,” said Elena, who also rocked her side braid on race day.