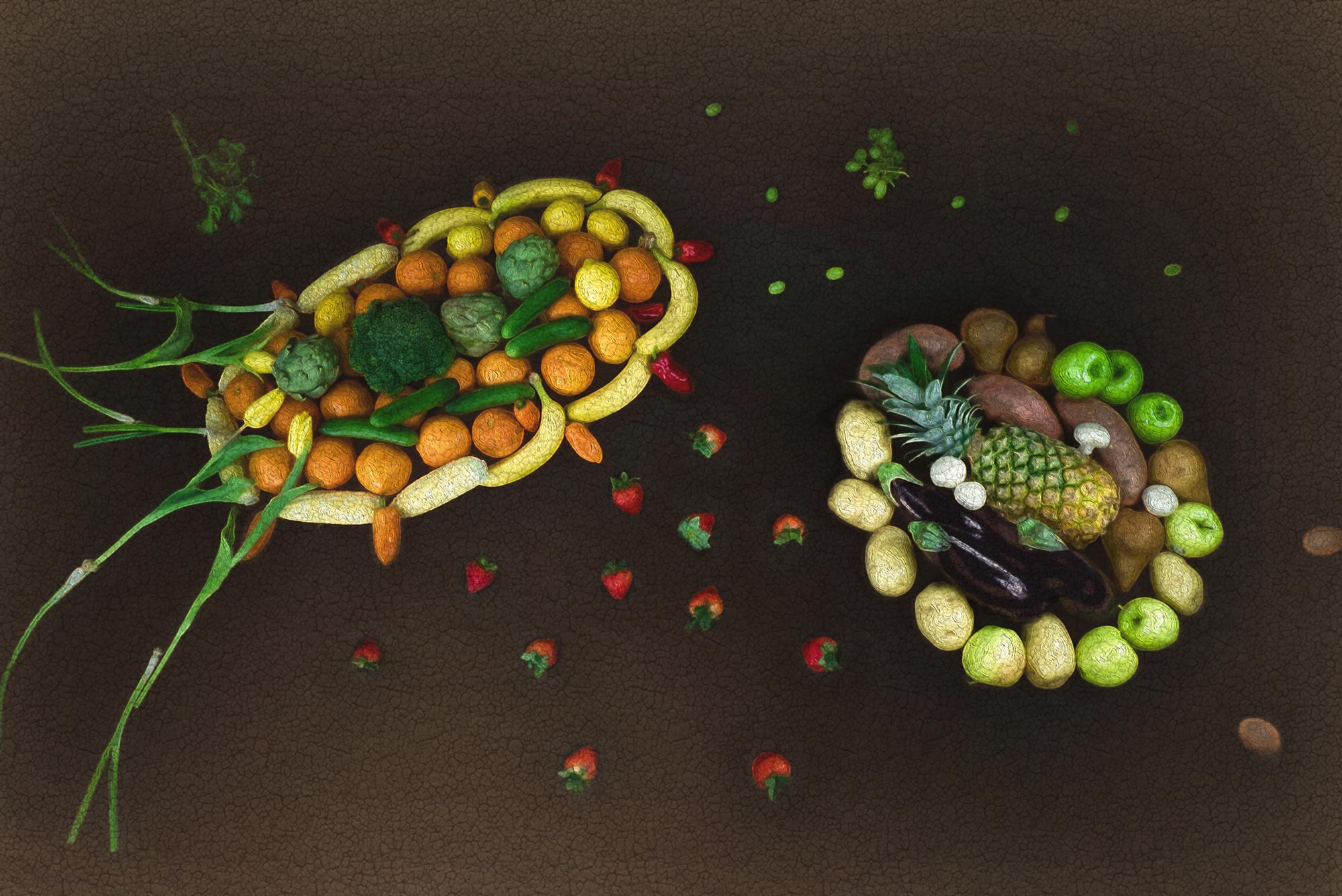 BU scientists are investigating how environmental molecules can be used to engineer “designer” microbiomes for combating disease, pollution, and more

In a new Nature Communications study, researchers from BU’s Microbiome Initiative discovered that providing microbial communities with a broader variety of food sources didn’t increase the variety of microbial species within their experiments, but more food did fuel more microbial growth. The team’s ultimate goal is to learn how to direct microbiome behavior through environmental molecules like food sources. Image courtesy of Alan Pacheco and Daniel Segrè

There’s a lot of interest right now in how different microbiomes—like the one made up of all the bacteria in our guts—could be harnessed to boost human health and cure disease. But Daniel Segrè has set his sights on a much more ambitious vision for how the microbiome could be manipulated for good: “To help sustain our planet, not just our own health.”

Segrè, director of the Boston University Microbiome Initiative, says he and other scientists in his field of synthetic and systems biology are studying microbiomes—microscopic communities of bacteria, fungi, or a combination of those that exert influence over each other and the surrounding environment. They want to know how microbiomes might be directed to carry out important tasks like absorbing more atmospheric carbon, protecting coral reefs from ocean acidification, improving the fertility and yield of agricultural lands, and supporting the growth of forests and other plants despite changing environmental conditions.

“Microbes affect us as humans through their own metabolic processes, they affect our planet through what they consume and secrete, they help create the oxygen we breathe,” says Segrè, a BU College of Arts & Sciences professor of biology and bioinformatics, and a College of Engineering professor of biomedical engineering. “A long time ago microbes are what made multicellular life possible.”

But, unlike many other synthetic biologists who are working to enhance or genetically engineer microbes directly, Segrè is more interested in how to direct the behavior of a microbiome by tweaking the environmental conditions it lives within—an approach he says could be better described as “synthetic ecology.”

“The more traditional synthetic biology approach would be to manipulate the genomes of the microbes,” Segrè says. “But we’re trying to manipulate microbial ecosystems using environmental molecules.”

“We know that microbial interactions with the environment are important,” says Alan Pacheco (ENG’15,’20), who earned his PhD in bioinformatics working in Segrè’s lab. Some of those interactions benefit several microbial species, some only benefit one species in a community, and some can be harmful to certain species, he says. “But there’s still so much we don’t know about why these interactions happen the way that they do.”

In a new study recently published in Nature Communications, Segrè, Pacheco, and their collaborator Melisa Osborne, a research scientist in Segrè’s lab, explored how the presence of 32 different environmental molecules or nutrients, alone or in combination with others, would influence the growth rate of microbial communities and the mix of diverse species making up a given microbiome.

“In the back of our minds we had this idea of diet, framed by studies that have looked at differences in the gut microbiome based on Western vs hunter-gatherer diets,” says Pacheco, who is now a postdoctoral fellow at ETH Zürich. Hunter-gatherer diets, opportunistic and comprising a wide range of plant-based food sources, are considered much more diverse than the Western diet, which is why the hunter-gatherer diet is thought to cultivate a healthier gut.

But the experimental results surprised the team. They expected they would see growth and diversity of microbiomes increase as the “bugs” had more access to a variety of foods—a range of carbons, including sugars, amino acids, and complex polymers—but that’s not what their carefully controlled experiments revealed. Instead, they observed that competition for food between different species of microbes hampered diversification within the microbial community.

“Our results demonstrate that environmental complexity alone is not sufficient for maintaining community diversity, and provide practical guidance for designing and controlling microbial ecosystems,” the authors write.

So, what are the mechanisms that control a microbiome’s diversity? “It’s going to take some time to figure out the cause of all these interactions,” Segrè says.

Although increasing the variety of food sources didn’t increase the variety of microbial species within their experiments, more food did fuel more microbial growth. “We found yield depends on the total number of carbon sources, but not on the variety of those sources,” Segrè says. “It’s like people at a picnic—if enough people come to a picnic, no matter what the spread of different foods, eventually everything will be eaten up. In many of our experiments, the microbial communities used up every last bit of carbon source to the fullest extent.”

Pacheco adds that if somebody can consume something, somebody else can outcompete them for it. “Our experiments showed that the crucial modulator in microbial diversity is how much these different organisms compete with one another for resources,” he says. “The more organisms compete, the less diverse that community is going to be.”

The team plans to do more research into additional environmental factors, investigating how nutrient access and variety changes microbial communities over time, and how the medium that the microbial community lives in affects their consumption and secretion of molecules. They are also exploring how metabolic processes amongst different microbial species could interact and interplay with each other, and how the ability of some organisms to sequentially or simultaneously consume multiple resources affects the microbiome overall.

Further unlocking and eventually harnessing all these environmental “dials and knobs” could open doors to using microbiomes to influence human metabolisms and health or disease states in people and in natural ecosystems.