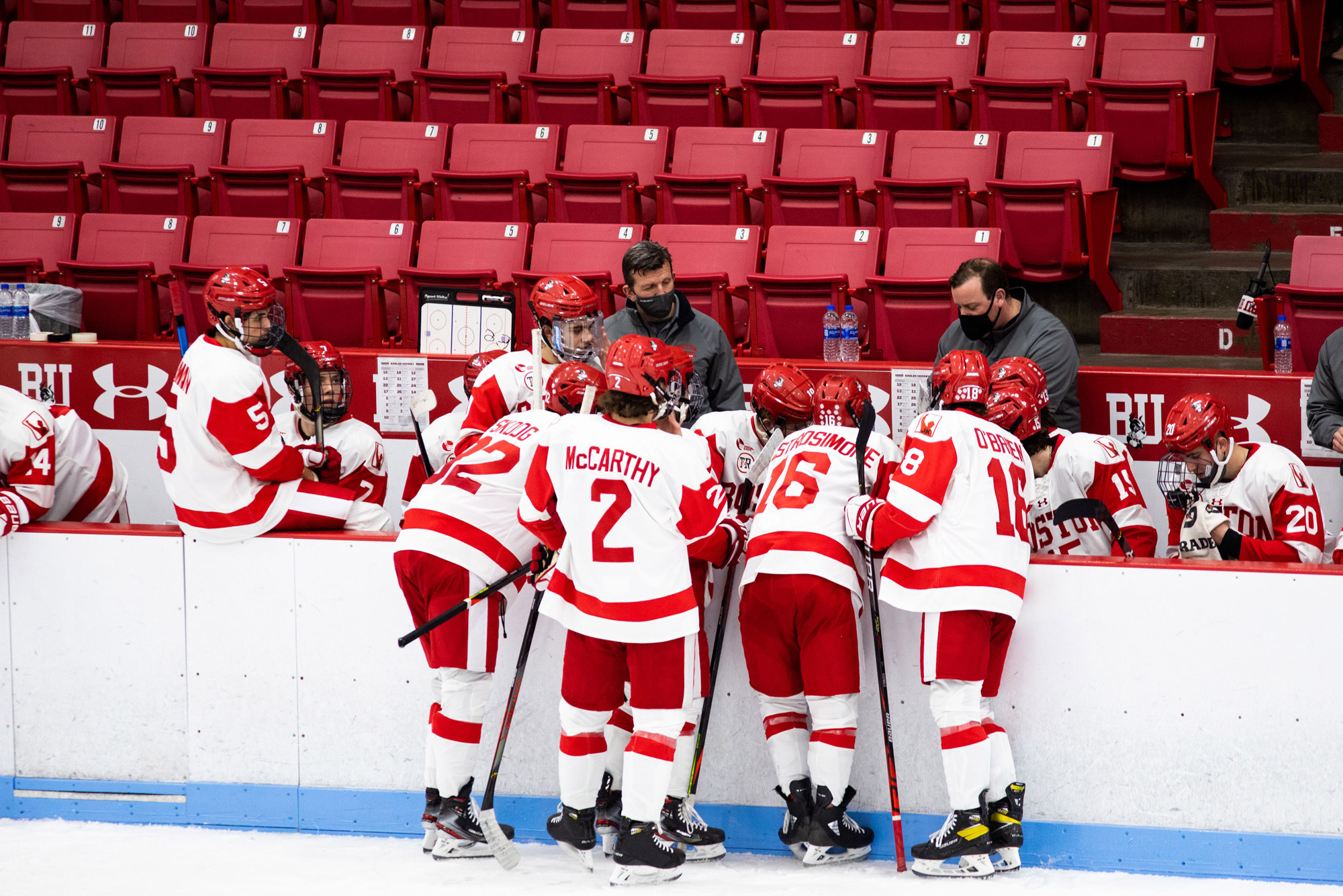 Albie O’Connell (CAS’99) (back right) leads BU to his first NCAA tournament game as head coach. He played in two Frozen Fours as a Terrier, one a national championship.

BU will play in opening round against St. Cloud State on Saturday

The Boston University men’s hockey team is heading to the NCAA Tournament for the first time since 2018.

The Terriers will take on St. Cloud State on Saturday, March 27, at 6:30 pm at Albany’s Times Union Center in the 16-game opening round, with the opportunity to face off against Boston College or Notre Dame the following night for a trip to the Frozen Four.

“Every year we have the same goals, and the national tournament is the big one,” says captain Logan Cockerill (SHA’21).

BU holds a 10-4-1 record this season, with the condensed schedule highlighted by wins over ranked opponents Providence College, UMass, and BC. The Terriers were upset by UMass Lowell in the Hockey East quarterfinals, but their record was good enough to earn a nod from the NCAA hockey selection committee at Sunday night’s selection show.

“I think we’ve had a pretty good showing through the year,” says third-year head coach Albie O’Connell (CAS’99). “We feel like our best hockey is still ahead of us.”

Saturday will mark O’Connell’s first NCAA appearance at the helm for BU. He took over as head coach shortly after David Quinn (CAS’89) led the Terriers to the national quarterfinals in 2018. O’Connell says he and his team are looking forward to the opportunity to skate on the national stage again.

“At this time of the year, to get another opportunity to play, everyone’s pretty excited about it,” he says. “If you play the right way, any team in the tournament can win.”

Playing in the national tournament oftens leads to uncommon matchups, and this is especially true this year. The Terriers are paired up with St. Cloud State for just the second time in program history—their first meeting resulted in a 5-3 BU win in the 2000 national tournament, also held at Albany.

O’Connell says preparation will be key, and he and his team will spend part of this week reviewing video to prepare for taking on an unfamiliar opponent.

St. Cloud State comes in off a 5-3 loss to North Dakota in the National Collegiate Hockey Conference championship game. The Huskies have played 27 games this season, skating to a 17-10 record. While BU has played 12 fewer games than SCSU, Cockerill says the Terriers are well prepared to take them on.

“We’ve been practicing for the last nine months and getting better as a team, so we’re really confident heading to the tournament. We don’t really feel like that [difference] is going to change how we play at all,” he says.

Another new element this weekend will be the presence of fans at the games. The state of New York is allowing 10 percent capacity at Times Union Center, so up to 1,750 fans could be attending. It will be the first time BU has played in front of a crowd all season.

“It’s probably going to be a little strange,” O’Connell says, “but it’ll be great to get a little more noise in the building.”

Boston College and Notre Dame will start the weekend with a rivalry bout on Saturday afternoon, with the winner of that matchup advancing to play BU or St. Cloud State on Sunday.

O’Connell says the possibility of a Terriers-Eagles NCAA tournament game is exciting, but the focus has to stay on the opener. “We’re going to try to take it one game at a time,” he says. “If we had that opportunity to play [BC] at that point, that would be amazing. There would be nothing better.”

Cockerill and his teammates are on board with O’Connell’s approach. “You can’t look at the Frozen Four, you can’t look at who’s in your bracket or even the national championship,” Cockerill says. “At the end of the day, it’s just another hockey game.”

The 2021 NCAA Division 1 Hockey Tournament begins March 26; the puck will drop at 6:30 pm on Saturday, March 27, for the BU–St. Cloud State game, which will be televised live on ESPNews. Sunday’s quarterfinal will begin at 5:30 pm on ESPN2. Both games can also be seen online on WatchESPN.