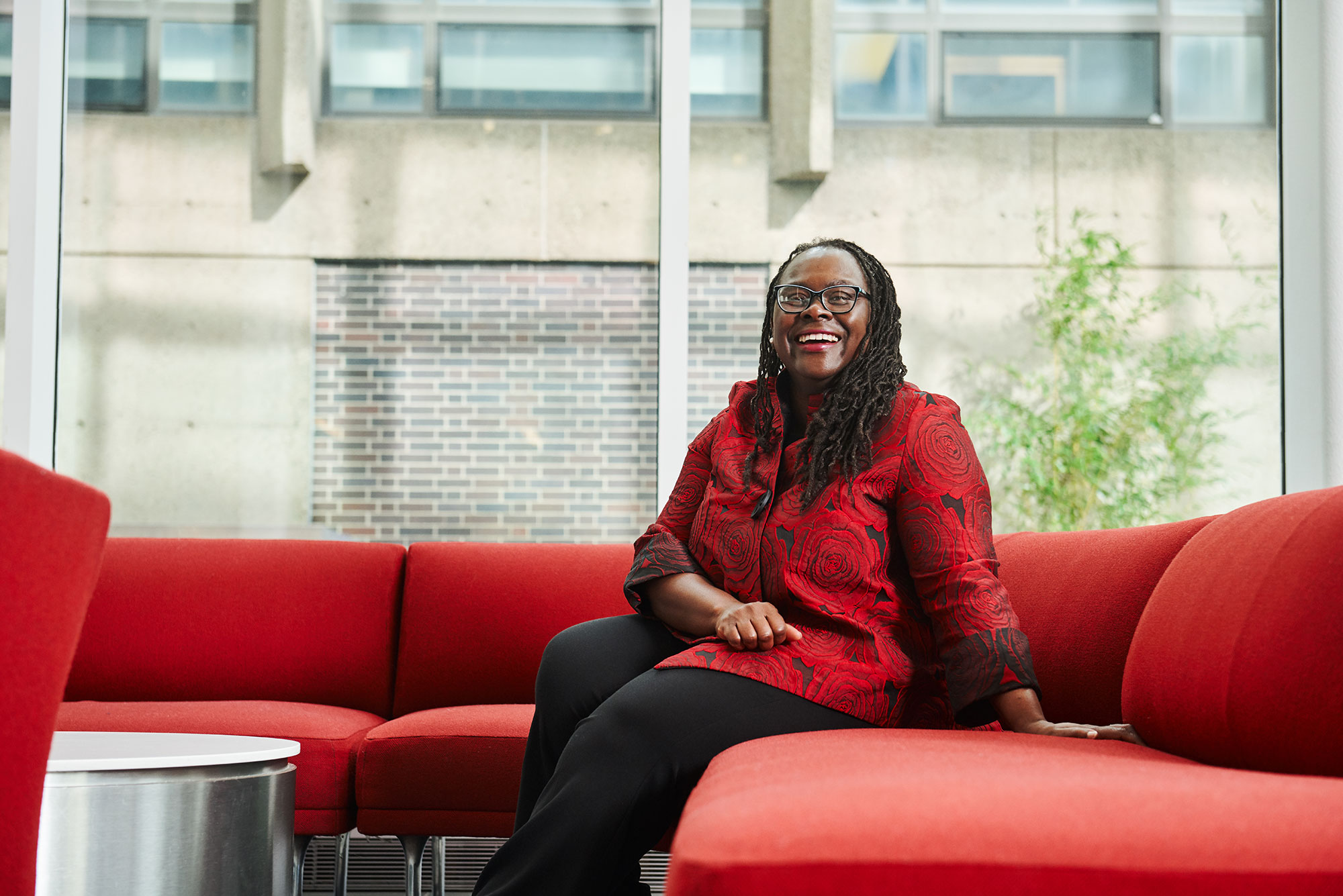 She’s honored to be in same class as civil rights lawyer and scholar Kimberlé Crenshaw—and another of her heroes, Oprah Winfrey

As a first-year law student in 1994, Angela Onwuachi-Willig felt so alienated and alone she wondered if there was a place for her in the legal world. Then she was introduced to critical race theory (CRT)—a school of thought holding that racism, both individualized and structural, is not an aberration. It is embedded in our everyday lives. The term CRT was coined by civil rights lawyer and scholar Kimberlé Crenshaw. The CRT scholars and voices that Onwuachi-Willig read and heard during law school helped her envision a space for herself in the field, providing the foundation that would underpin her scholarly work.

This spring, Onwuachi-Willig, dean of Boston University’s School of Law and the Ryan Roth Gallo and Ernest J. Gallo Professor of Law—the nation’s first endowed chair in critical race theory—was elected to the American Academy of Arts & Sciences (AAA&S) along with 251 others. Crenshaw, a professor of law at Columbia University and UCLA, was among those others—as was another of Onwuachi-Willig’s heroes, Oprah Winfrey.

“Kimberlé Crenshaw has transformed numerous disciplines in academia,” says Onwuachi-Willig, who is a renowned scholar of civil rights, family, and employment discrimination law, holds a PhD in African American studies and sociology from Yale in addition to her law degree from the University of Michigan, and has been short-listed for the US Supreme Court. “I’m surprised [Crenshaw] was not admitted years before. It’s an incredible honor to be in her class. And Oprah Winfrey—talk about honor! I remember watching her as a kid. She made me want to be a talk show host. Seeing Oprah Winfrey taught me how to dream.”

As for her own election to the academy, Onwuachi-Willig says she was stunned. “It’s a wonderful honor. When I saw the email, I couldn’t believe it. I was just over the moon.”

Onwuachi-Willig is “one of the nation’s premier legal scholars,” says Jean Morrison, BU provost and chief academic officer, describing the LAW dean’s election to the AAA&S as “well-deserved acknowledgement of the groundbreaking work she continues to do advancing our national conversation around issues of civil rights equity, workplace discimination, gender, and family law.” The honor, Morrison adds, “also reflects the level of respect [Onwuachi-Willig] has earned from her colleagues.”

Onwuachi-Willig is among more than 20 BU faculty members to be elected to the AAA&S, a group that includes President Robert A. Brown; Michael Hasselmo, Ha Jin (GRS’93), Virginia Sapiro, Nancy Kopell, and former US poet laureate Robert Pinsky, all College of Arts & Sciences professors; and Dana Robert, a School of Theology professor.

In its news release, the academy calls the election of the new class “an opportunity to recognize extraordinary people who help solve the world’s most urgent challenges, create meaning through art, and contribute to the common good from every field, discipline, and profession.”

When I saw the email, I couldn’t believe it. I was just over the moon.

“While the founders did not anticipate a year with a historic pandemic, overdue racial reckoning, and political strife,” the academy’s statement says, “the purpose of electing new members is more compelling than ever.”

Onwuachi-Willig wrote openly in May 2020 about her anguish, as a Black woman and mother of three Black children, over the murder of George Floyd, a Black man, by Derek Chauvin, a white Minneapolis police officer—and the long list of police killings of other unarmed Black people. Galvanized by their shared pain and outrage over Floyd’s death, Onwuachi-Willig and four other Black women law deans launched a sweeping effort to engage law schools across the country in the fight for racial justice. In October 2020, the Association of American Law Schools honored Onwuachi-Willig and the four other deans with its inaugural Impact award.

Following tradition, the academy asks new members to write a formal letter of acceptance. Onwuachi-Willig shared a draft of her letter with BU Today. She writes of her “enormous pride and gratitude” in accepting the honor, one “made all the more meaningful by its timing.” She had “wept at COVID-19’s deadly impact on humans across the globe and decried the pandemic’s deeply disproportionate and harmful impact on Black and brown people throughout the United States,” while remaining thankful to have her family “remain virus-free and to have a job where I was able to keep myself safe.

“I also frequently found myself hanging on, sometimes by a thread, as tragedy after tragedy made clear the reality of two different Americas for white people and Black people in our nation,” she continues. She ticks off a list: the murder of Floyd, the failure to indict any of the police officers for the killing of Breonna Taylor in Kentucky in March 2020, and the fatal shooting in April of Daunte Wright by a police officer in Minnesota, which occurred during the Chauvin trial.

The academy’s email invitation arrived in Onwuachi-Willig’s inbox on April 22, two days after a Minneapolis jury convicted Chauvin of all three charges against him in the murder of Floyd. The LAW dean writes in her letter of the roller coaster of emotions she’d experienced throughout that week—“deep fear that Chauvin’s trial would follow the pattern of others, and end with his acquittal; brief relief and, to some extent, [a] moment of hope” after the guilty verdict; “immediate uneasiness and concern that my fellow white citizens might return to prior complacency as pundits commented on the verdict in troubling ways.”

Then, “the complete dejection when I woke the next morning to learn that 16-year-old Ma’Khia Bryant had been shot and killed by Columbus, Ohio, police officer Nicholas Reardon.

“In short,” Onwuachi-Willig writes, “I was living the research that I was currently engaged in, and had been engaged in for the past several years—research about the cultural trauma that Blacks experience as a group in relation to police killing cases.

“It seems both silly and selfish to say,” the LAW dean writes, but the academy’s email invitation “brought me great joy and solace.

“At a time when Critical Race Theory, an area of study that has been central to my scholarship, has been the subject of organized attacks from journalists, politicians, everyday citizens and, at one point, our nation’s President, the Academy’s invitation to me functioned as an important response to that resistance in my eyes,” Onwuachi-Willig writes. “Similarly, in a moment when I, and so many other Blacks, desired to hear from institutions like our courts and our governmental bodies that our lives matter—that Black lives matter—the Academy’s election of me helped to remind me that my work and my voice matter.”