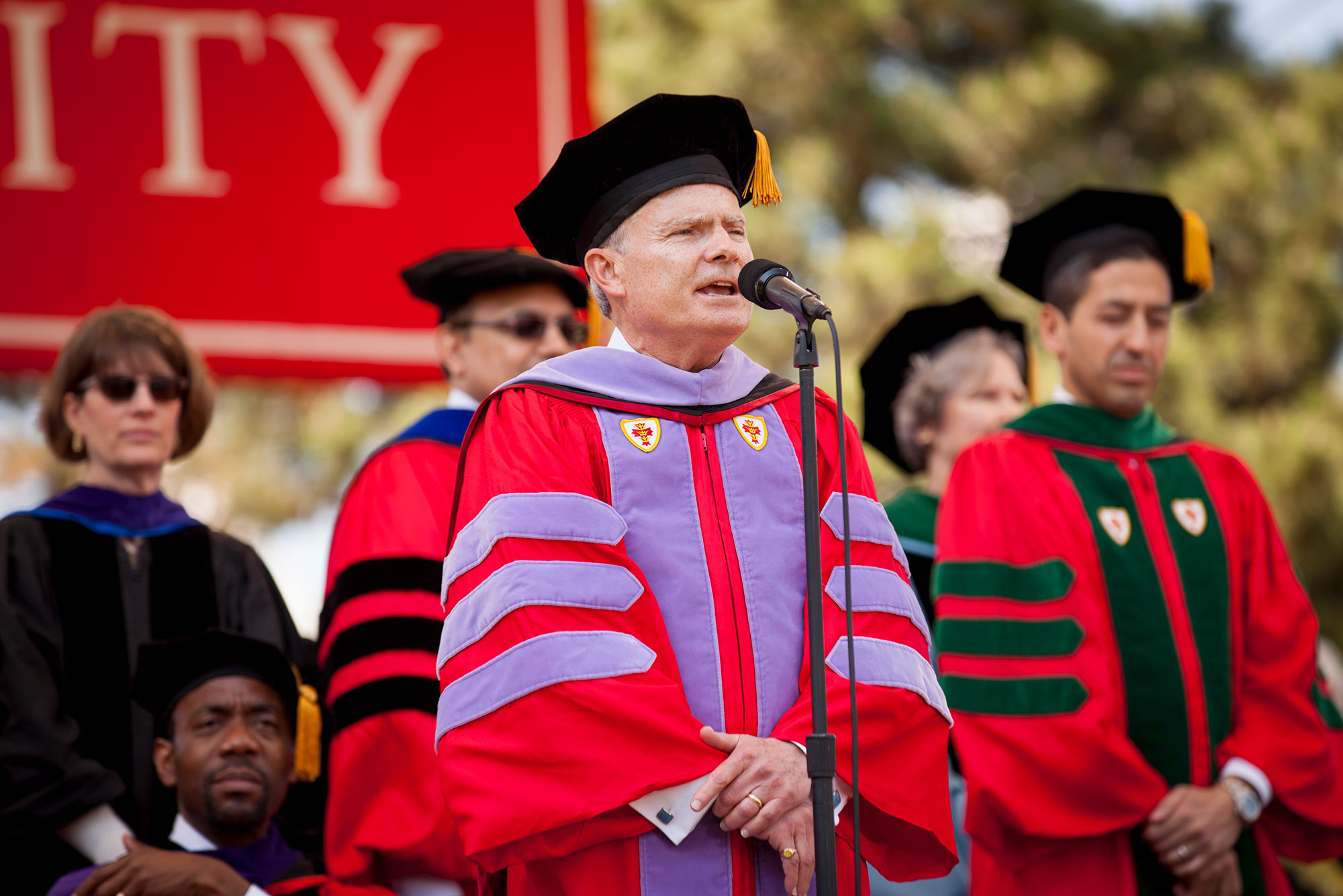 Goldman School of Dental Medicine Dean Jeffrey Hutter, here presenting candidates during the 2015 Boston University Commencement at Nickerson Field, announced his retirement on Monday after more than a decade leading the school. Photo by Natasha Moustache for Boston University Photography

Jeffrey Hutter, the dean of Boston University’s Henry M. Goldman School of Dental Medicine since 2008, announced on Monday that he will retire as of March 31. The school, which has had only three deans in its nearly 60-year history, will fill the role with an interim dean until a national search can be conducted and a permanent replacement named.

Hutter said he and his wife, Kathleen, along with their two dogs, Kelly and Molly, will fly to Honolulu the morning after his last day, fulfilling a dream he’s held for years to return to the place where he was stationed with the US Navy Dental Corps and where he spent some of his earliest days in dentistry, Pearl Harbor.

“My wife and I had set a goal, we reached those ages this year, and we asked ourselves, do we stay on, or not,” the 71-year-old Hutter said Monday afternoon as the surprise news of his departure started to get out. “I didn’t want to become a dean who just hung on. We set a date and we were going to keep to that date.” He said he and his wife look forward to celebrating their 50th anniversary in Hawaii in a few years, and noted that they will also be closer to their daughter and grandson in California.

The transition comes just as the school is in the final stages of a major project—a three-year, $112 million renovation of its building at 100 East Newton Street that’s expected to be finished this summer. The school is home to more than 800 students and 300 faculty, as well as staff and volunteers, and it serves more than 30,000 patients a year.

Hutter became the school’s dean ad interim in 2007, succeeding Spencer Frankl, who died that year after leading the school for more than 30 years. Hutter, who was later named the Spencer N. Frankl Professor in Dental Medicine, said at the time that it was “an honor to have that challenge of succeeding someone who left such a mark on the University.”

“Dean Hutter has led Boston University’s Goldman School of Dental Medicine during a period of great progress,” BU President Robert A. Brown said in a statement. “He’s worked tirelessly to raise the School’s standards and stature, while also raising funds to support research, teaching, and the magnificent renovation of the dental school complex on the Medical Campus. This project will conclude this summer and is a fitting capstone to Dr. Hutter’s 24 years of service to BU. We are grateful for his service here, as well as his service to our nation as a Navy dentist with progressively more senior assignments. We wish Jeff and Kathy all the best in this next phase of their lives.”

Karen Antman, dean of the BU School of Medicine and provost of the Medical Campus, who oversees the dental school, expressed similar praise. “Jeffrey’s been a terrific dean for more than the last decade, leading the dental school in academics,” she said. “And he’s been particularly effective taking us into the space of digital dentistry and masterminding the new renovations. He put the clinical program on firm ground.”

In a heartfelt note Hutter sent to his colleagues at the school Monday afternoon, he wrote: “I have had the opportunity to interact with countless students, residents, faculty, and staff; I have valued these interactions because they gave me the opportunity to teach and mentor each of you while simultaneously learning from you.

Digital dentistry, in particular, has taken off at SDM under Hutter. The school has integrated comprehensive digital patient records, incorporated computer-designed and manufactured implants and dentures into its teachings, and begun using computer-produced X-rays, which come back quickly, have clearer images, and require less radiation than traditional X-rays.

“I feel best about leaving at a time when the school is in a better position,” Hutter said. “With regard to technology, carbon 3D printing, artificial intelligence, I’m very proud of that. And we’ve increased our research.”

In 2020, the school became the first American dental school to use a dental implant robot, the first one approved by the US Food and Drug Administration. The robotic machine, which they call Yomi, does not replace surgeons, but supplements their clinical judgment. SDM also became the first dental school in the country to guide its implant surgery with computer-aided design and manufacturing technology, which means patients are able to get same-day crowns and bridges.

The school, which today uses what is called the Group Practice Leadership Program, meaning teams of dentists and specialists practice and collaborate to treat patients, was established in 1963 as the School of Graduate Dentistry, with Henry Goldman as its founding dean. Construction on the East Newton Street building began four years later, and when it opened in 1969, clinical teaching activities were transferred there. Frankl replaced Goldman as dean in 1977 and remained in place for three decades, until he succumbed to a brain tumor, and Hutter was chosen as dean.

Antman says that because of how much change the dentistry field has seen in the past decade, especially digitally, choosing a new dean is an important search for the University. “It’s an exciting place to recruit a new dean into,” she says.

Hutter, who earned a DMD from the University of Pennsylvania, a certificate in endodontics from the Naval Postgraduate Dental School, and a master’s in education and human development from George Washington University, is a past director of the American Board of Endodontics and a past director of the board of directors and a past president of the American Association of Endodontists.

“I didn’t want to be a lame duck dean,” Hutter said, when asked the reasoning behind his announcement.

“During my time in the Navy, I was lucky enough to be stationed at the Naval Dental Center Pearl Harbor on Oahu, Hawaii, for four years,” his note continued. “Mrs. Hutter and I loved our time in Hawaii, and vowed to return as often as possible and, ultimately, to live there upon our retirement. Our dreams are now becoming reality, and we are looking forward to spending our ‘golden years’ in paradise.”

And in a final word: “I look forward to following your careers from Hawaii, and hopefully saying ‘aloha’ to you when your travels take you to Honolulu.”

There are 2 comments on Jeffrey Hutter, Dean of BU’s Goldman School of Dental Medicine, to Retire