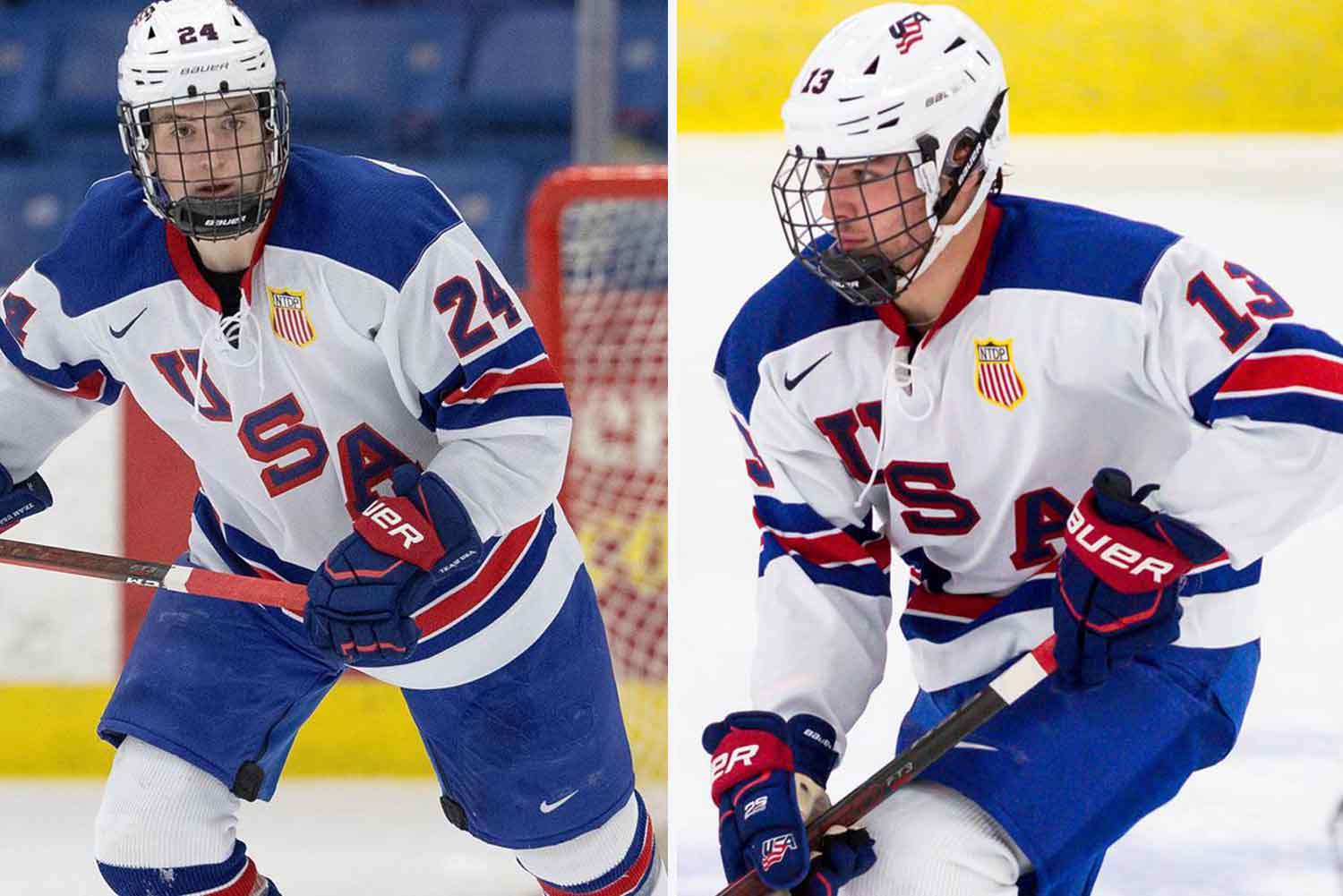 Tyler Boucher (CAS’25), at left, joins a long list of USA Hockey’s National Team Development Program alumni to go on to skate for the Terriers. Ty Gallagher (CAS’25), at right, is the newest Terrier to be drafted by the Boston Bruins. The most recent before Gallagher was Charlie McAvoy, who played at BU for two seasons before joining the Bruins in 2016. Photos by Rena Laverty/USA Hockey’s NTDP

Classmate Ty Gallagher is picked by Boston Bruins in seventh round

Two incoming Terriers were just selected in the 2021 National Hockey League Draft, which took place on July 23 and 24. Tyler Boucher (CAS’25) heard his name called in the first round, followed by Ty Gallagher (CAS’25) on day two.

“Our coaching staff was excited to hear their names be called during the draft,” says Boston University men’s hockey head coach Albie O’Connell (CAS’99). “They both deserved that moment and I’m thrilled for Tyler, Ty, and their families.”

Boucher became the 21st Terrier to be named a first-round draftee when the Ottawa Senators chose him with the 10th overall pick. He is the fifth top-10 pick from BU in the last six years.

A product of USA Hockey’s National Team Development Program (NTDP), Boucher is the third Terrier in the last five years to be chosen in Ottawa’s first-round selection: Shane Bowers (CGS’19, COM’22) and Brady Tkachuk (CGS’19) were early picks by the Senators in 2017 and 2018, respectively.

After tallying 33 points in 45 games across two seasons with the NTDP’s U17 team, Boucher skated in 12 games with the U18 team last season, scoring 6 goals and adding 5 assists. The Arizona native previously attended Avon Old Farms School in Avon, Conn., which has become a popular stop for BU hockey players, including current forward Jamie Armstrong (CAS’23).

“It was a crazy moment,” Boucher says. “You dream of it as a kid and it was really cool to share that with my family. It was not a normal year for the draft, but we were together in a hotel at the USA Hockey Summer Showcase. It was awesome to be picked by a great organization like Ottawa.”

On the second day of the draft, Gallagher became the latest local NHL prospect when the Boston Bruins picked him in the seventh round. A talented defenseman like current Bruins players Charlie McAvoy (who attended BU before leaving to turn pro) and Matt Grzelcyk (COM’16), Gallagher owns the NTDP record for goals by a defenseman (25).

Like Boucher, Gallagher spent significant time with the national U17 team, appearing in 53 contests at that level before playing another 48 games with the U18 team last year. He also represented his country this past spring at the 2021 IIHF Ice Hockey U18 World Championship.

The two draftees will join a BU roster packed with NHL prospects when they arrive on campus later this month. The college hockey season begins in October.

“We look forward to both of them making an impact on our team this year and we are excited to help them develop both on and off the ice,” O’Connell says.