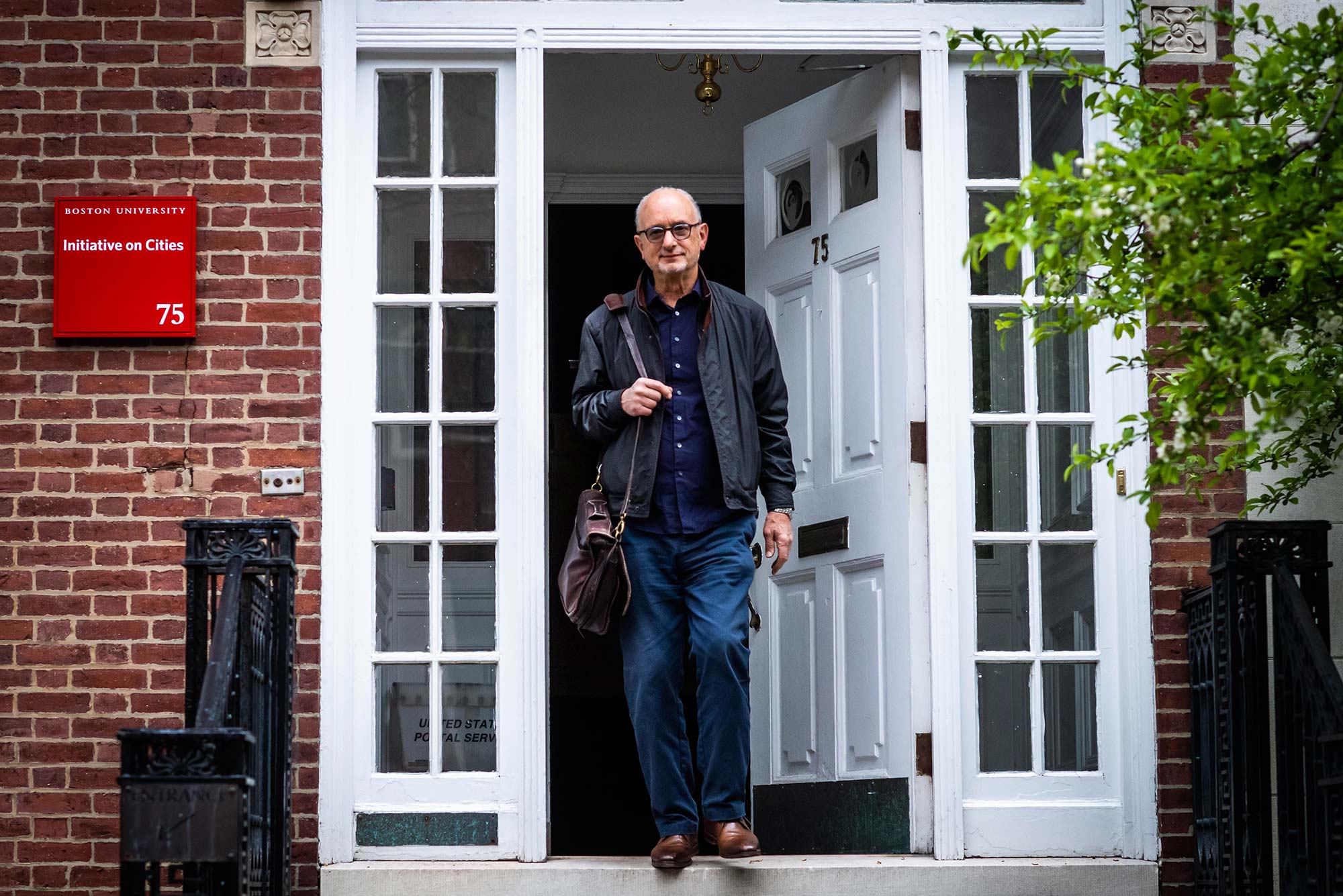 Graham Wilson, who is stepping down as codirector of the Initiative on Cities on July 1 and will retire from the University at the end of the year, helped forge problem-solving partnerships between leaders of America’s cities and BU scholars and students who study cities. Photo by Cydney Scott

In 2014, Graham Wilson shared founding director duties at BU’s Initiative on Cities (IoC) with a marquis name. Working at the IoC with Boston’s longest serving mayor, Thomas Menino (Hon.’01), was “one of the highlights of my career,” says Wilson.

That’s quite a statement, given that Wilson’s career spans almost a half century. Yet as the College of Arts & Sciences professor of political science prepares to step down as IoC codirector July 1 in advance of his retiring December 31 after 14 years at BU, his pride in the IoC isn’t idle boasting.

In the seven-plus years since its inception, the IoC pioneered academic polling of US mayors via its annual Menino Survey, sponsored vital research, including COVID-19’s effects on vulnerable urban groups, and forged links between those running cities and scholars studying them at BU and other universities, continuing after Menino’s death from cancer just nine months after joining the IoC.

“I hope that our work, particularly the Menino Survey of Mayors, has helped highlight the needs and concerns of cities,” says Wilson. “Our contribution has been to foster dialogue between cities in the United States and around the world on addressing the problems that confront them—climate change, equity, affordable housing.”

He also cites the study opportunities the organization has  created for BU students. “I’m particularly proud of the Metrobridge program,” which pairs Terriers with municipalities to assist on various projects. “I picked up the idea at a conference in San Diego, and…it’s a win-win, win-win program. Cities get needed research done and students have a valuable experience, faculty forge research relationships and the University strengthens its relationship with surrounding communities.”

“What a legacy,” says Katharine Lusk, IoC codirector and founding executive director. “Hundreds of students have participated in MetroBridge, we have recurring internships with cities and the National League of Cities, millions of dollars of urban research have been catalyzed, the Menino Survey of Mayors is widely known, and BU boasts a large, connected community of urban scholars and researchers.

“Graham has been a terrific champion for the Initiative and urbanists across BU, and a wonderful partner and ally to me,” Lusk adds, citing the discussion after Menino’s death, so soon after he came to BU, about whether the IoC should continue. “Thanks to Graham’s leadership, and the support of President Robert A. Brown and Provost Jean Morrison, we did.”

The timing of his retirement reflects a convergence of influences, Wilson says, among them the retirement of his wife, Virginia Sapiro, Arts & Sciences dean emerita and a CAS professor of political science. The two are looking forward to having time to travel, including visits to his native UK, Wilson says. He’s also working on his 11th book, The Competitive City, “about how cities compete with each other for business investment and people.”

“There are a limited number of tenured professorships at top universities,” he says. “I’ve been privileged to have had a tenured or tenure track position since 1973, when I started my career in the UK. It’s time to let a young person have a crack at the position. In my experience it is the young people who have the really new and fresh ideas.”

Retirement dovetails as well with the IoC’s needs, Wilson says. “No unit should have the same leadership forever, and even if I wasn’t retiring, I think it is time for a new director who will have a different perspective and ideas.”

His areas of research include the relations between business and government, which in recent years have been affected by the rise of Trump populism and the wedge it drove between corporate America and the GOP over civil rights. Many companies criticized Donald Trump’s anti-immigrant comments, and more recently, Major League Baseball yanked the All-Star Game from Georgia to protest that state’s new voting restrictions.

“I think we are at a moment when many—of course, not all—executives of major corporations are realizing that their companies need to accept responsibility to contribute to solving our problems,” from racial equity to assaults on democracy like the January 6 insurrection, Wilson says. “Many corporate PACs have paused contributing to the Republicans who tried to overturn the result of the presidential election. We’ve seen, partly out of self-interest, automobile manufacturers accept and defend higher emission standards. This is getting beyond the simplistic cut taxes, abolish regulation instinct.”

A national search is underway for a successor to Wilson at the IoC. Prior to arriving at BU, he taught at the University of Wisconsin at Madison and the UK’s University of Essex. He earned bachelor’s and doctoral degrees from Oxford.

“I taught many hundreds of students at BU,” he reflects. “However, it is in the smaller courses and the directed study courses that I have taught that one really gets to know the students. BU gets wonderful undergraduates, bright, intelligent, highly motivated, and caring. I’ve been impressed by how many of the academically strongest students I have taught here have also been making a major contribution to the community in the city as well as on campus.”

Graham Wilson, Founding Codirector of BU’s Initiative on Cities, Will Retire
0
share this