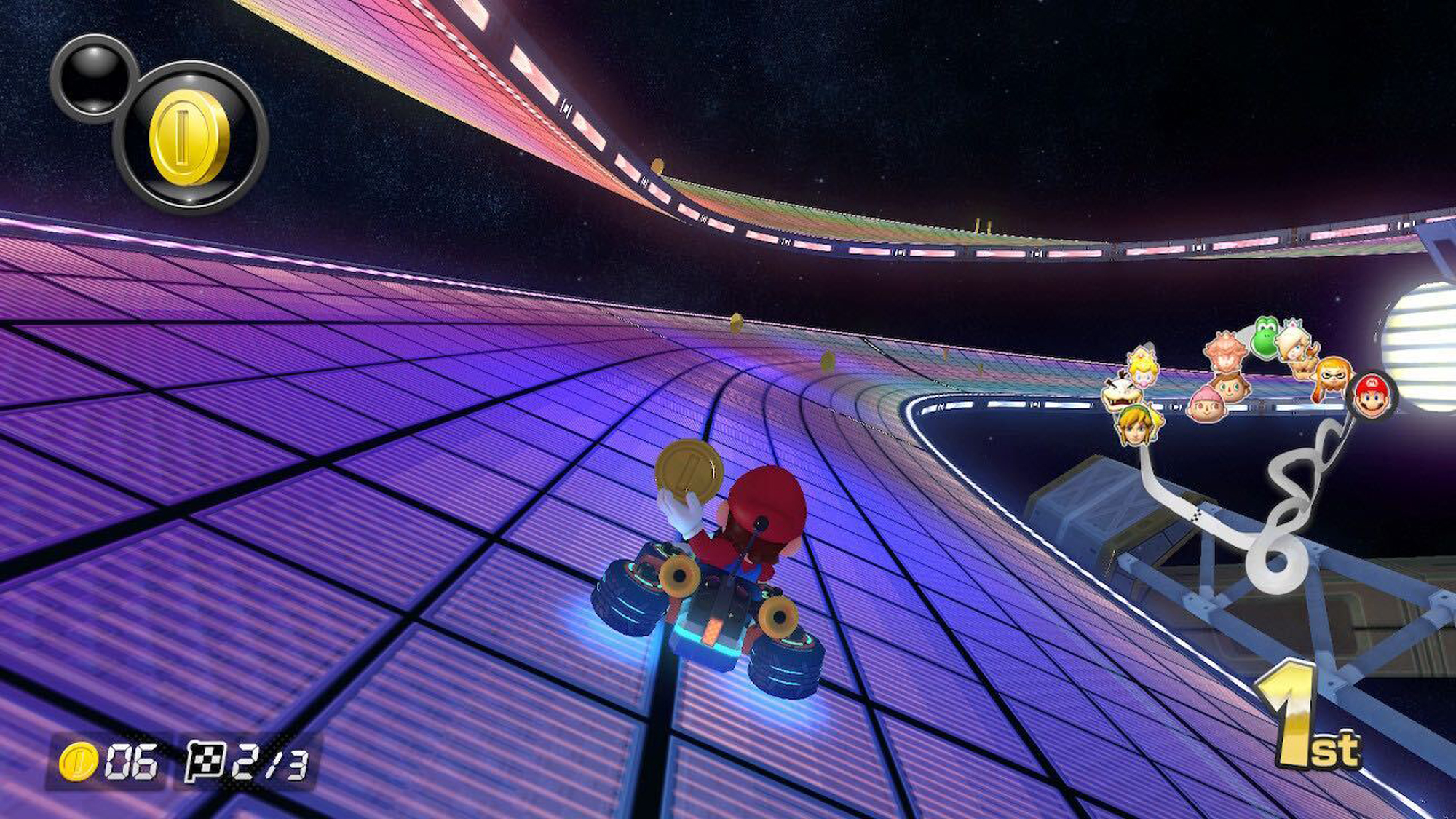 Mario Kart gives players falling behind in the race the best power-ups, designed to bump them towards the front of the pack and keep them in the race. Meanwhile, faster players in the front don’t get these same boosts. Photo courtesy of The Brink staff

Could Mario Kart Teach Us How to Reduce World Poverty and Improve Sustainability?

Many Mario Kart enthusiasts are familiar with the rush of racing down Rainbow Road, barely squeaking around a corner, and catching a power-up from one of the floating square icons on the screen—or less ideally, slipping on a banana peel laid by another racer and flying off the side of the road into oblivion. This heated competition between multiple players, who use a variety of game tokens and tools to speed ahead or thwart their competitors, is part of what makes the classic Nintendo racing game that has been around since the early 1990s so appealing.

“It’s been fun since I was a kid, it’s fun for my kids, in part because anyone can play it,” says Andrew Bell, a Boston University College of Arts & Sciences assistant professor of earth and environment. But as a researcher studying economic principles, Bell also sees Mario Kart as much more than just a racing game.

In a recent paper, Bell argues that the principles of Mario Kart—especially the parts of it that make it so addictive and fun for players—can serve as a helpful guide to create more equitable social and economic programs that would better serve farmers in low-resource, rural regions of the developing world. That’s because, even when you’re doing horribly in Mario Kart—flying off the side of Rainbow Road, for example—the game is designed to keep you in the race.

“Farming is an awful thing to have to do if you don’t want to be a farmer,” Bell says. “You have to be an entrepreneur, you have to be an agronomist, put in a bunch of labor…and in so many parts of the world people are farmers because their parents are farmers and those are the assets and options they had.” This is a common story that Bell has come across many times during research trips to Pakistan, Bangladesh, Cambodia, Malawi, and other countries in southern Africa, and it’s largely what inspired him to focus his research on policies that could aid in development.

In his new paper, Bell argues that policies that directly provide assistance to farmers in the world’s poorest developing regions could help reduce poverty overall, while increasing sustainable and environmentally friendly practices. Bell says the idea is a lot like the way that Mario Kart gives players falling behind in the race the best power-ups, designed to bump them towards the front of the pack and keep them in the race. Meanwhile, faster players in the front don’t get these same boosts, and instead typically get weaker powers, such as banana peels to trip up a racer behind them or an ink splat to disrupt the other players’ screens. This boosting principle is called “rubber banding,” and it’s what keeps the game fun and interesting, Bell says, since there is always a chance for you to get ahead.

“And that’s exactly what we want to do in development,” he says. “And it is really, really difficult to do.”

In the video game world, rubber banding is simple, since there are no real-world obstacles. But in the real world, the concept of rubber banding to extend financial resources to agricultural families and communities who need it the most is extremely complicated.

Those opportunities might look like this, Bell says: governments could set up a program so that a third party—such as a hydropower company—would pay farmers to adopt agricultural practices to help prevent erosion, so that the company can build a dam to provide electricity. It is a complicated transaction that has worked under very specific circumstances, Bell says, but systems like this—known as Payments for Ecosystem Services (PES)—have been successful in benefiting both the farmers and the environment. A major challenge is finding private companies that are willing to pay for ecosystem services, and connecting them with farmers who are willing to change their agricultural practices. The good news about rubber banding, though, is that the more people participate in such economic programs, the more other people will join in as well; a concept Bell calls “crowding in,” in his analysis.

He says the biggest obstacle to overcome in most of the world’s developing places is figuring out how to route assistance to people in need in the first place—because, until recently, many of the people were essentially living off the grid.

But Bell says the ability to reach people in the lowest-resource areas has improved in the last decade or so, largely thanks to the adoption of mobile phones. (In another recent paper, Bell and his collaborators found that smartphones can also play a role in understanding and addressing food insecurity.) Now, mobile devices help local governments and organizations identify people searching for more prosperous livelihoods beyond the challenging practice of agriculture and reach out to those people with economic opportunities.

Bell says further expanding access to mobile devices in poor regions of the world would also allow the gap between the richest and poorest families to be better calculated and could also help measure  the success of newly implemented policies and programs.

“Mario Kart’s rubber banding ethos is to target those in the back with the items that best help them to close their gap—their own ‘golden mushrooms,’” Bell wrote in the paper, referring to the power-up that gives lagging racers powerful speed bursts. Improving environmental stewardship while alleviating poverty requires that researchers and decision-makers consider from the outset, “within their unique context and challenge at-large, what the golden mushroom might be.”

Bell worked for International Food Policy Research Institute between 2012 and 2015, and then joined New York University’s faculty as an assistant professor, where he began writing this paper. After six years at NYU, Bell joined BU to continue his research in sustainable development solutions in hard-to-reach places.

Could Mario Kart Teach Us How to Reduce World Poverty and Improve Sustainability?

There are 5 comments on Could Mario Kart Teach Us How to Reduce World Poverty and Improve Sustainability?

Could Mario Kart Teach Us How to Reduce World Poverty and Improve Sustainability?
5
share this