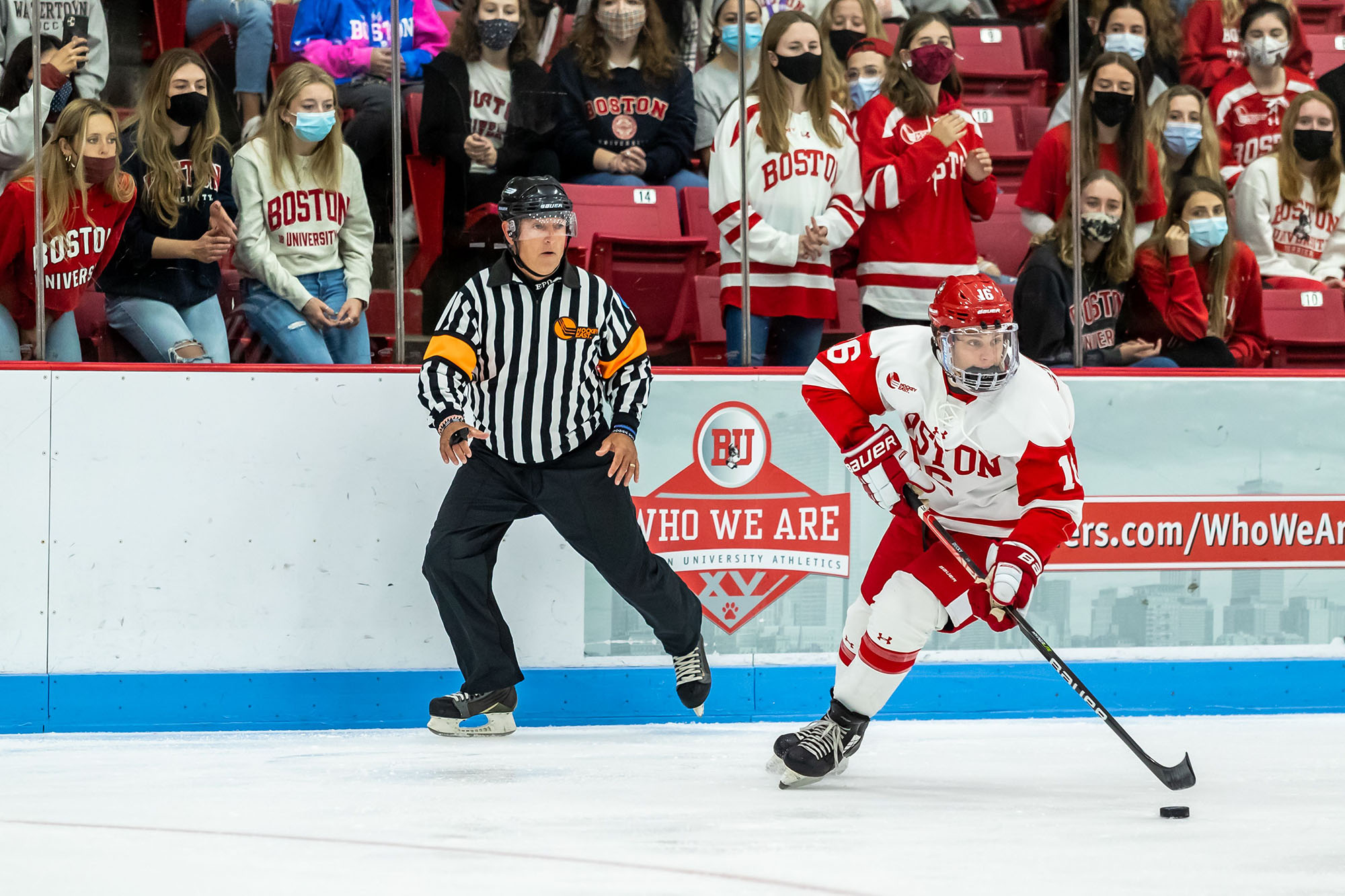 Robert Mastrosimone (SHA’23) is looking to reprise his role as a significant offensive threat, firing off a team-high nine shots on goal during a victorious  exhibition game against Holy Cross October 2.

Terriers open 2021–2022 campaign Friday, return to Agganis with fans in the stands Saturday

It may have been only an intersquad scrimmage, but it didn’t feel like it.

As the BU men’s hockey team divided in two on a recent Saturday morning, dozens of donors, families, and diehard supporters reacquainted themselves with the Agganis Arena stands.

“I had a little bit of nerves playing in front of people again,” captain Logan Cockerill (SHA’22) acknowledged during a luncheon for the team and supporters after the competitive practice. “It’s really good to see everybody’s faces again.”

The crowd at the scrimmage was a small harbinger of the droves of fans who’ve been waiting 18 months to attend a game in person and are anxious to pack Agganis this season. After spending last year at Walter Brown Arena sans spectators, Terriers and fans will return to Agganis Saturday, October 9, when they host the UConn Huskies.

“It’s exciting to play again,” head coach Albie O’Connell (CAS’99) said after his team took down Holy Cross 5-1 in an October 2 exhibition game with nearly 2,000 supporters in the Walter Brown bleachers. “It’s exciting to see the band and to get fans in the building.”

We know we’ve got a good core of players, we’ve got some talent, and it’s our job as a coaching staff to make sure we get the most out of them.

The feeling is mutual, says BU Pep Band graduate assistant Victoria Paspalas (CFA’21,’23). “I think the band had a lot of energy, since it was our first game back in a year and a half. To open the season on such a high note definitely got us excited to see what the season will look like.”

The timing for the return of fans couldn’t be better. This season marks the program’s centennial year, and the team is aiming to make the most of the moment, coming off of a 2021 NCAA Tournament appearance in a season impacted by COVID-19.

“We’ve got some scars that are pretty good,” O’Connell said at the luncheon. “We can look back and say, ‘Today’s going to be a good day.’”

There’s plenty to look forward to on the BU hockey calendar. The biennial Red Hot Hockey rivalry game between BU and Cornell returns to New York City’s Madison Square Garden on Saturday, November 27, and in early February the annual Beanpot tournament resumes at TD Garden, the first time in two years. The Terriers will play a total of 36 games before the playoffs begin in March.

Cockerill is eager to get the season started: “We have a really good team, and we’re looking forward to a great 100th year of BU Hockey.”

The captain is one of four Terriers who elected to stay and play a fifth season of college hockey, courtesy of an NCAA ruling resulting from the pandemic. Three of those veteran players are wearing leadership letters, and O’Connell says the team’s extra experience can be a major advantage.

“I think we’re a little bit more seasoned,” he said after last week’s exhibition game. “We were picked sixth last year and we came in second. We had a good year, but we’re looking to take a step.”

BU placed second in this year’s Hockey East preseason coaches’ poll, ranking above traditional rival Boston College and trailing only the reigning national champion University of Massachusetts. As O’Connell pointed out after the game, his team benefits from the return of many of its key players.

Although O’Connell says last season was an “absolute blur,” he believes his team is well-positioned for success this year. Part of his optimism comes from the off-season hiring of associate head coach Jay Pandolfo (CAS’96), a two-time Stanley Cup champion with the New Jersey Devils, and director of operations Doug Friedman (CAS’94), who played professionally with the Edmonton Oilers.

“I just wanted to make sure we got great people. They’ve got a really good way about them. They’re really poised, they’re really professional, and that’ll go a long way with our players,” fourth-year head coach O’Connell says about the two additions.

“We know we’ve got a good core of players, we’ve got some talent, and it’s our job as a coaching staff to make sure we get the most out of them.”

With current and former Terriers on the ice, on the bench, and in the stands this year, O’Connell says he anticipates a special season. “It’s a really good opportunity to celebrate some of the people, players, and teams that we’ve had at the University. It’ll be a lot of fun.”

The Terriers will begin their 2021–2022 regular season on the road at the University of Connecticut Friday, October 8, at 7 pm, before a rematch against the Huskies in their home opener at Agganis Arena on Saturday, October 9, at 7 pm. Students with a sports pass can log in and claim a ticket for free. Help accessing the sports pass can be found at Agganis Arena’s Sports Pass Guide. Single game tickets range from $19 to $30 for the general public and $13 to $25 for faculty, staff, and students without a sports pass, and can be purchased in advance online or in person at the Agganis Arena ticket office, 925 Commonwealth Ave., Monday to Friday, from 10 am to 5 pm. Note: fans attending games at Agganis Arena and any other indoor venue are required to wear masks and starting October 15, must show proof of vaccination or of a negative COVID test within the last 72 hours. All games can be streamed for free at collegesportslive.com/hockeyeast, and fans can also follow all the action on the Terrier Sports Radio Network and @BUGameDay .