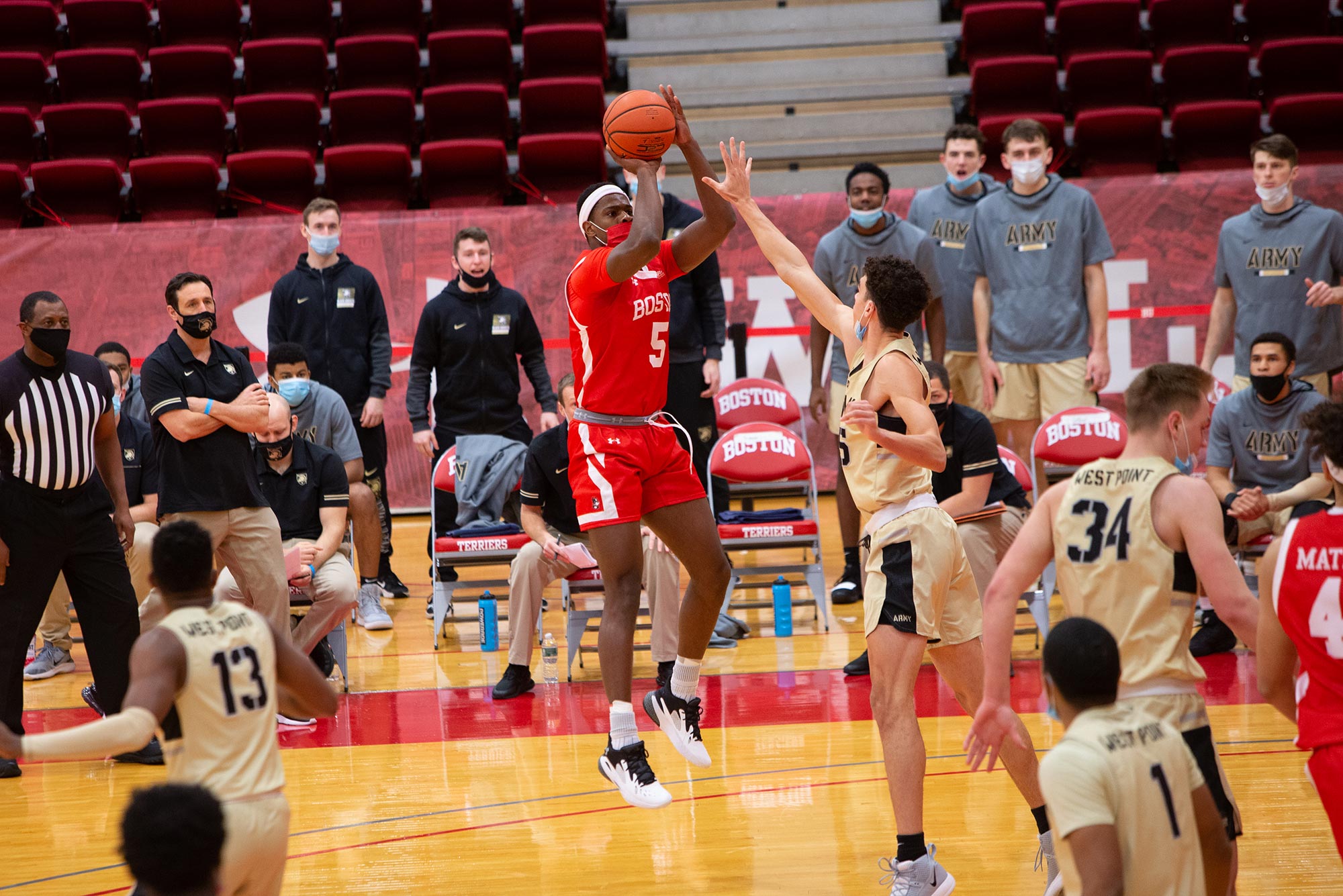 After an injury sidelined him for a year, Walter Whyte (CAS’22), the team’s returning lead scorer, emerged last season as a key part of the Terrier offense. Photo by Matt Woolverton, BU Athletics

More than halfway through a truncated season, both teams are hoping for another postseason run

More than midway through a truncated regular season of just 16 games—half the number in a typical season—the BU men’s and women’s basketball teams are hoping to match, or surpass, last year’s successes in a season curtailed by the COVID-19 pandemic.

On March 11, 2020, the men captured their first-ever Patriot League title when they defeated Colgate 64-61. That win earned the Terriers their first berth in the NCAA Tournament (another pandemic-canceled tournament) since 2011. The women’s team had advanced to the Patriot League conference semifinals for the first time and was scheduled to host Lehigh on March 12, when the pandemic brought an abrupt end to the college basketball season.

Now, as both teams prepare to play Colgate this weekend, emerging from a one-week pause across BU Athletics, they are pushing for another bid at conference titles and a chance to advance to the NCAA Tournament.

Despite the circumstances—including an extended off-season, limited team practice time, and the mandate of wearing masks while playing—the women’s team, led by head coach Marisa Moseley (CAS’04), got off to its best start since 1978, going 5-0 to open the season. The streak was snapped January 17 by Army West Point in the Terriers’ most recent game, but they are aiming to get back in the win column this weekend against Colgate.

Katie Nelson (Questrom’21) attributes the team’s success to players’ chemistry on and off the court. “We’ve played really well together as a team, and that’s helped us achieve those wins,” she says. “At the end of the day, we’re all really good friends before we’re teammates, so just having that really strong connection and bond has helped us be so successful on the floor.”

Moseley says she notices that same comradery on a regular basis. “They’re really a great group of kids who support each other,” she says.

Nelson has emerged as the team’s leader. She’s played the most minutes in the Patriot League of anyone on the team over the last two seasons. Offensively, she ranks first in the conference this season in assists per game, with 5, and fifth in scoring with an average of 14.8 points per game. She crossed the 1,000-point career threshold, the 24th Terrier ever to do so, in the January 9 game against Colgate.

The key to her success, Nelson says, has been modifying her game year by year. “This past season, I put a lot of time and effort into being a little more creative on the offensive end, making sure that I’m aggressive and finding new ways to score,” she says.

Nelson says the team is taking advantage of a deep bench. “Anyone can be put on the floor at any time,” she says. “Because of that depth, we’ve really been able to push the tempo and go up and down the floor for a full 40 minutes.”

The men’s team is benefiting from an equally strong rotation. Despite having several players injured and forced to miss games earlier this season, the team is back to full strength, something head coach Joe Jones says has made his job harder—in a good way.

“This is the first time that we have everybody back,” Jones says. “Now it’s like, guys don’t want to come out.”

With Terriers in and out of the lineup through the first month of action, one constant has been Sukhmail Mathon (CAS’21). The BU center has started every game so far this season and is setting career highs in points per game (11), rebounds per game (6.7), field goal percentage (.600), and free throw percentage (.706).

Mathon “is very disciplined in what he does,” Jones says. “He had an unbelievable fall. He was dominating every drill.”

At the core of the team, Jones says, is Jonas Harper (CGS’20, CAS’22). Harper won’t dazzle on the statistics sheet, the coach says, but his effort and leadership make him indispensable. “He just plays with all-out heart. Without him, we’re not the same team.”

Harper says he has embraced his role as an upperclassman, trying to follow the example Mahoney set last season. “I’ve been just trying to be more vocal to the younger guys, and be a mentor to them on and off the court,” he says, “so they can thrive and that can help us all as a team.”

The pieces are starting to come together for the reigning Patriot League champions. Even though the Terriers started their title defense going 1-5 in the first six games, Jones says he sees no need for panic, noting that the team bounced back in the most recent series, sweeping Lafayette on January 23 and 24 in Pennsylvania.

“Everyone was like, ‘Coach, we’re gonna be fine,’” he says. “They just have a really strong belief in each other. They’re winners.”

In this unprecedented season, shaped by the health and safety demands of the ongoing pandemic, with both BU basketball teams already more than halfway through their regular season schedules, this year the traditional marathon has become a sprint.

Jones says his team is looking to reach its peak at the finish line. With six games left, he says, “we’ve gotta try to be the best team that we can be in March.”

Both Terrier basketball teams play Colgate this weekend. The women host the Raiders, with start times of 2:30 pm on Saturday and 1:30 pm on Sunday. The men visit Colgate, tipping off at 1 pm on both Saturday and Sunday. All games can be seen live on ESPN+.