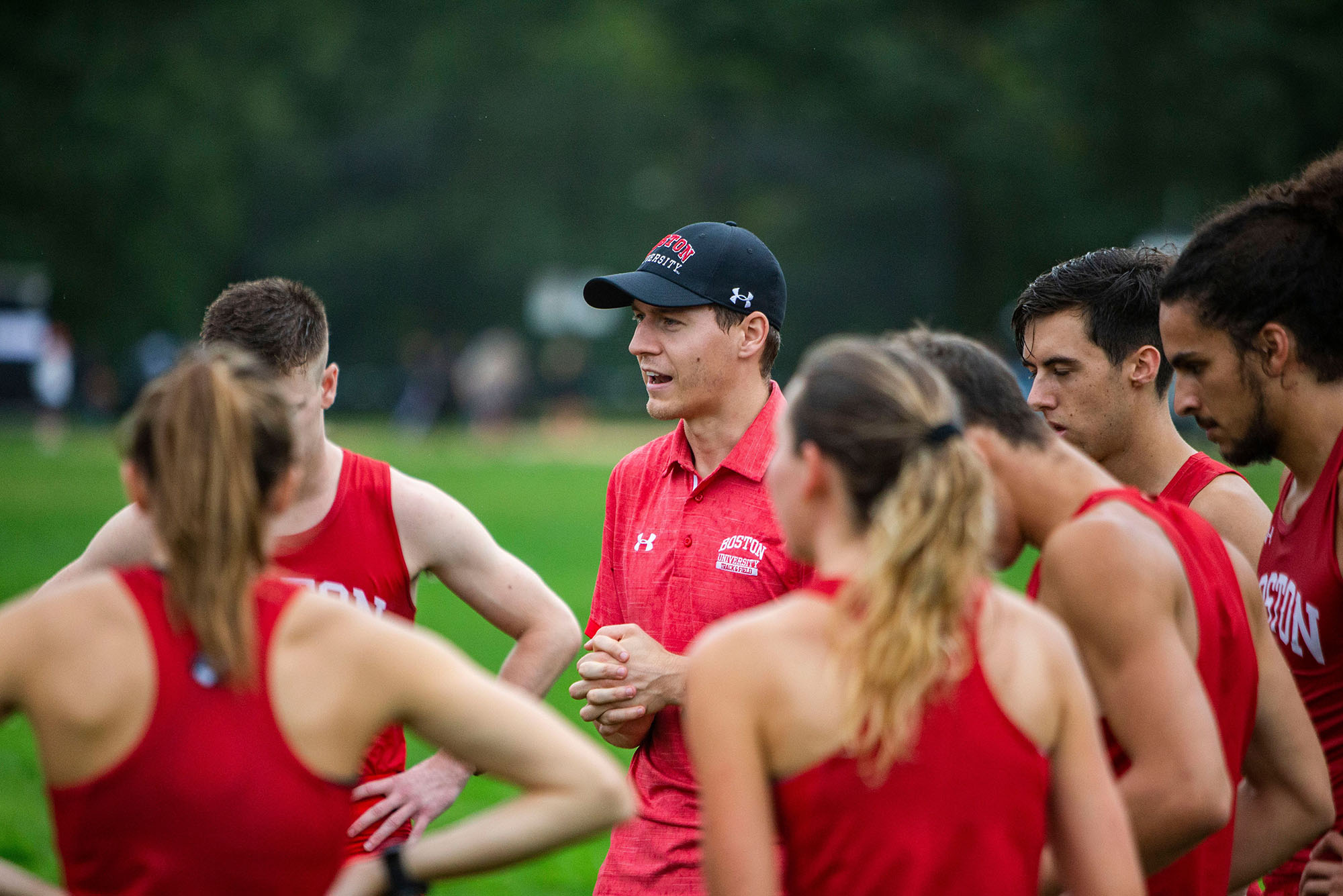 Jordan Carpenter was hired in June, and this is in his first season as associate head coach of cross country.

There has been no shortage of dynasties in the history of Patriot League cross country: seven men’s teams and three women’s teams have won three or more consecutive conference championships since its inception in 1990. Boston University has not attained this feat yet, but that could change Sunday when the Terriers run in the 2021 Patriot League Championship.

The BU women’s cross country runners enter this weekend as the favorite in their category, coming off of back-to-back Patriot League titles. The Terriers earned the 2019 trophy by a margin of seven points and won a tiebreaker to claim the COVID-postponed 2020 championship last March.

Andrea Claeson (COM’22) led BU with a second-place finish at last spring’s title race, scoring a spot on the All-Patriot League First Team. Since then, Claeson says, her team’s expectations have continued to grow.

“The goal is always there, to want to win,” she says. “But I feel like maybe this year we feel a little bit more pressure around us.” That said, she’s confident the team will rise to the occasion. “Cross country is all team-focused. It’s about beating other people and other teams, and I think a lot of us do very well when it comes to those kinds of meets.”

The men’s team is aiming high as well. The squad has finished among the top three teams at the conference championship every year since 2015, and they came up just eight points short of their first-ever Patriot League title last March.

Army took the men’s 2020 trophy, marking their fourth conference victory in a row. Prior to that streak, Navy won three straight championships. Matthew Mason (Questrom’24) says it’s time for BU to interrupt the streaks of the two recent powerhouses.

“I know Army and Navy have a little rivalry,” he says. “We try to crack into that and beat them both at the same time.”

The title race last spring was the only Patriot League cross country event all year, which meant that first-year runners like Mason were thrown directly into a high-stakes event. He thrived on the big stage, finishing 13th overall and earning recognition as Outstanding Rookie of the Meet.

With a more normal season this year, he says, he and the team have enjoyed the fall season. “We’ve been able to travel, we’ve been able to stay in hotels—the atmosphere is a lot better than it ever was last year.”

The men’s team ran in four events prior to this fall’s finale, most recently finishing 6th out of 21 teams at the Princeton Invitational on October 16. The women’s team placed third at Princeton that day, their best finish of the season so far.

Finishing on a high is no fluke, according to cross country associate head coach Jordan Carpenter.

“We kind of had the luxury or freedom to experiment,” with a full season, he says, “to learn how to race, to try different strategies, and hopefully, have it figured out at the right time as we head to the championships.”

Carpenter, who is also a track and field assistant coach, was hired in June after five successful seasons at  Pomona-Pitzer in California, the last four as men’s head cross country and track and field coach. Arriving at BU less than a decade after a successful collegiate career, he says connecting with student-athletes comes naturally.

“Not being too far removed from my competitive career, I think it makes it really easy to relate,” he says. “I don’t come and approach the athletes from this position of unilateral authority—it’s more of being partners in the process.”

Although it’s his first season on the East Coast, Carpenter will be familiar with the course this weekend. The Patriot League Championship is being hosted by Lehigh, where the Terriers competed in the Paul Short Run on October 1.

Claeson says it was a record-setting day for her team. “We went a few weeks ago, and I think everyone except one PR’d [personal record] on that course,” she says.

This time around, however, there is more on the table than personal accomplishments. The Terriers have an opportunity to etch their names in the Boston University record books—and Mason says the squad is ready to go.

“Everyone’s starting to come into form and it’s all coming together for this weekend. We just want to get up there and compete.”

The women’s cross country Patriot League Championship begins Sunday October 31, at Lehigh University’s Goodman Campus in Bethlehem, Pa., at 11 am. The men’s cross country Patriot League Championship follows at noon. Live stats and results will be available all day on patriotleague.org, and BU fans can find more information on goterriers.com and follow along on Twitter at @TerrierTFXC and @BUGameDay.