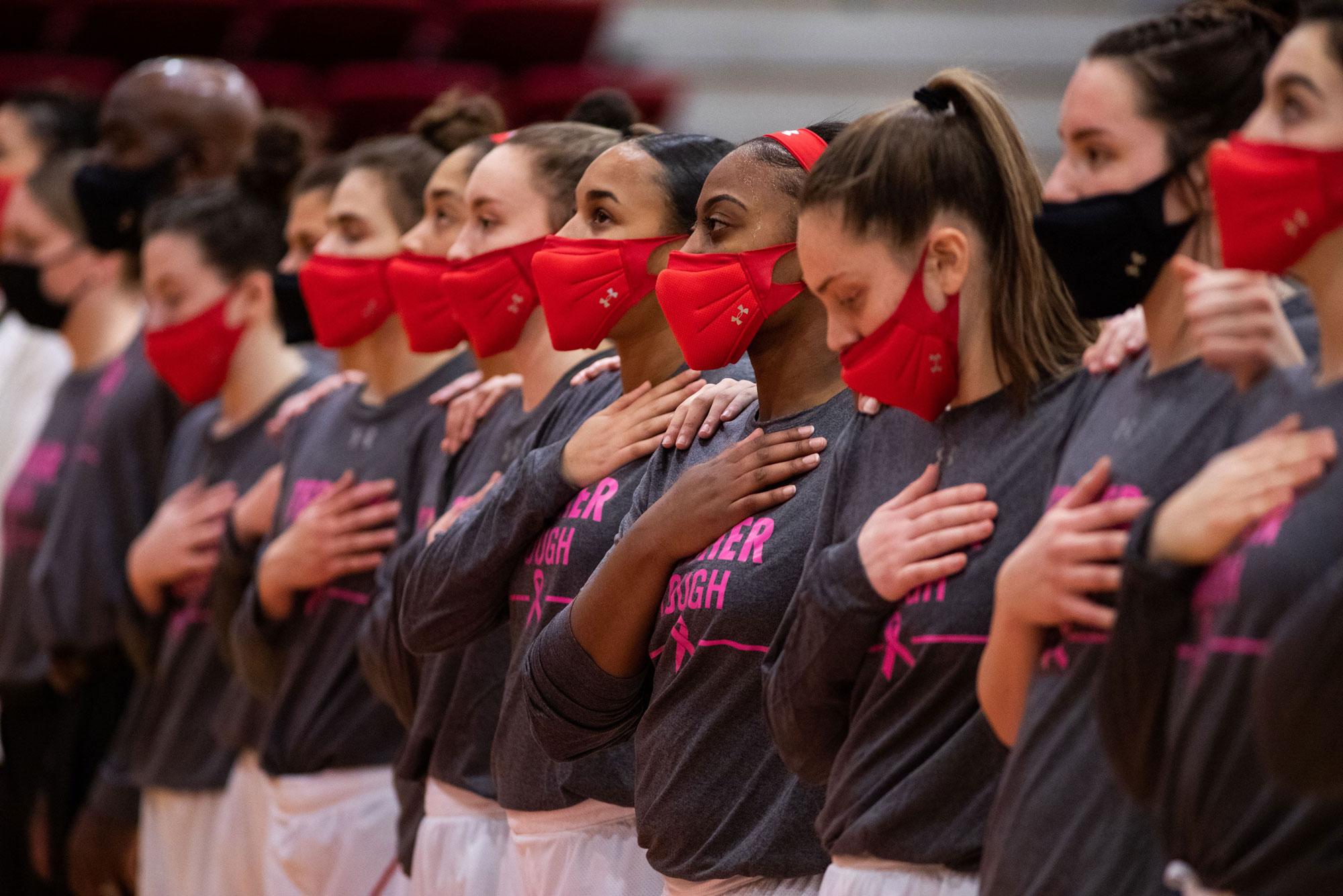 Women’s basketball Terriers as “Lift Every Voice and Sing” plays before their most recent home game, on February 17. The women are off to the best start in team history, posting an 9-1 record with 4 games to go in the regular season.

Throughout February, BU Athletics is celebrating Black History Month by playing “Lift Every Voice and Sing,” known as the Black National Anthem, at several BU home games, at least once for each team. The women’s basketball team in particular has embraced the initiative, playing the hymn before every one of its home games this month.

“I just think it offers another opportunity to dialogue around history and just get a chance to share the culture of the Black community in another way,” says women’s basketball head coach Marisa Moseley (CAS’04), who has been at the forefront of the tribute.

With protests and demonstrations last summer around violence against Black Americans, Moseley spent much of her off-season organizing the Patriot League Anti-Racism Commission and pioneering a Social Justice and Inclusion Committee within BU Athletics. Now in the middle of the winter sports season, she is finding ways to keep the movement alive around the games.

“I think that [Athletics director Drew Marrochello] has really been open to making sure that this wasn’t just a moment in time that came and went,” she says. “Even though February is officially Black History Month, that doesn’t mean that’s the only time we have to, or should, speak about these issues.”

Moseley’s words echo the sentiments of other members of the BU community.

Leland Clarke (Wheelock’75), a College of Fine Arts professor of the practice of musicology and ethnomusicology, says he sees a change in the way Black History Month has been viewed this year.

“I think because of Black Lives Matter and all the unrest that’s happening around the country, Black History Month is taking on a little bit more of a seriousness notation than it has in the past,” he says.

Moseley agrees. “There’s been much more of an emphasis, and an awakening of sorts,” she says.

With increasing awareness of Black History Month, “Lift Every Voice and Sing” has reemerged on a national scale: the NFL aired Alicia Keys’ rendition during the Super Bowl. Clarke says he cannot recall a time when the song was performed on as big a stage.

“It is a good thing, as long as people understand what it’s about, why it’s sung, and why it’s being done,” he says. “I think “Lift Every Voice” is one of those pieces where once you hear the lyrics and know why it was written, under the circumstances it makes it even more powerful than just something that we sing.”

The song is derived from a poem written by NAACP leader James Weldon Johnson and put to music by his brother, John Rosamond Johnson, in 1899. The song was adopted by the NAACP as the Negro National Anthem in 1919.

“‘Lift Every Voice and Sing’ is such a powerful song. Every time I hear it, I get an overwhelming sense of pride in knowing how far the Black community has come over the centuries, yet I am also reminded of how far we still have to go,” says women’s basketball team member Tenisha Pressley (Sargent’21). “While it’s played, I’ll close my eyes and thank those who have sacrificed so much to allow me to be in the position that I am, as an African American woman playing Division I college basketball.”

Cheryl Boots (GRS’94,’00, STH’14), a College of General Studies senior lecturer in humanities, has spent much of her career researching sacred music and the place of music and singing in society. She says the Johnson brothers had a long-lasting goal for their work.

“They were very interested in preserving African American culture and making sure African Americans had the claim to their culture that certain whites were trying to undermine,” Boots says.

“Lift Every Voice and Sing” was first performed in a celebration of Abraham Lincoln’s birthday on February 12, 1900, and has been recorded by scores of popular musical artists over the years. At its core, Clarke says, it’s a song that many members of the Black community grew up with.

“Growing up, we would sing it, and I would play it,” says Clarke, who learned piano as a youngster and has performed as a solo artist throughout the world. “It was very, very popular and very meaningful.”

“This is something that has had a well-established reputation in an inclusive American history,” Boots says. “You go through so much in these lyrics, from the heights of joy to the depths of sorrow.”

Moseley and the rest of the BU Athletics community are doing their part to continue the legacy of “Lift Every Voice and Sing,” and Boots and Clarke applaud the Terriers for the initiative.

“I think this is a great idea,” Boots says. “There’s so many ways that we can make our campus more inclusive and more explicitly aware of the diversity of students who live and work at BU.”

“They are stepping up, and really doing something commendable and powerful,” says Clarke. “They have now picked up the mantle, and said, ‘This is important.’

“It opens up that dialogue, which is extremely important, so I commend them for doing what they’re doing.”

From Moseley’s perspective, it is not always easy to take the lead on such a crucial cause. If she has the opportunity to create change, though, she embraces it.

“Even though at times it can be exhausting to feel like you’re the consummate educator,” she says, “the alternative is just to let people live in ignorance, and I refuse to do that if I have a chance to make some change.”