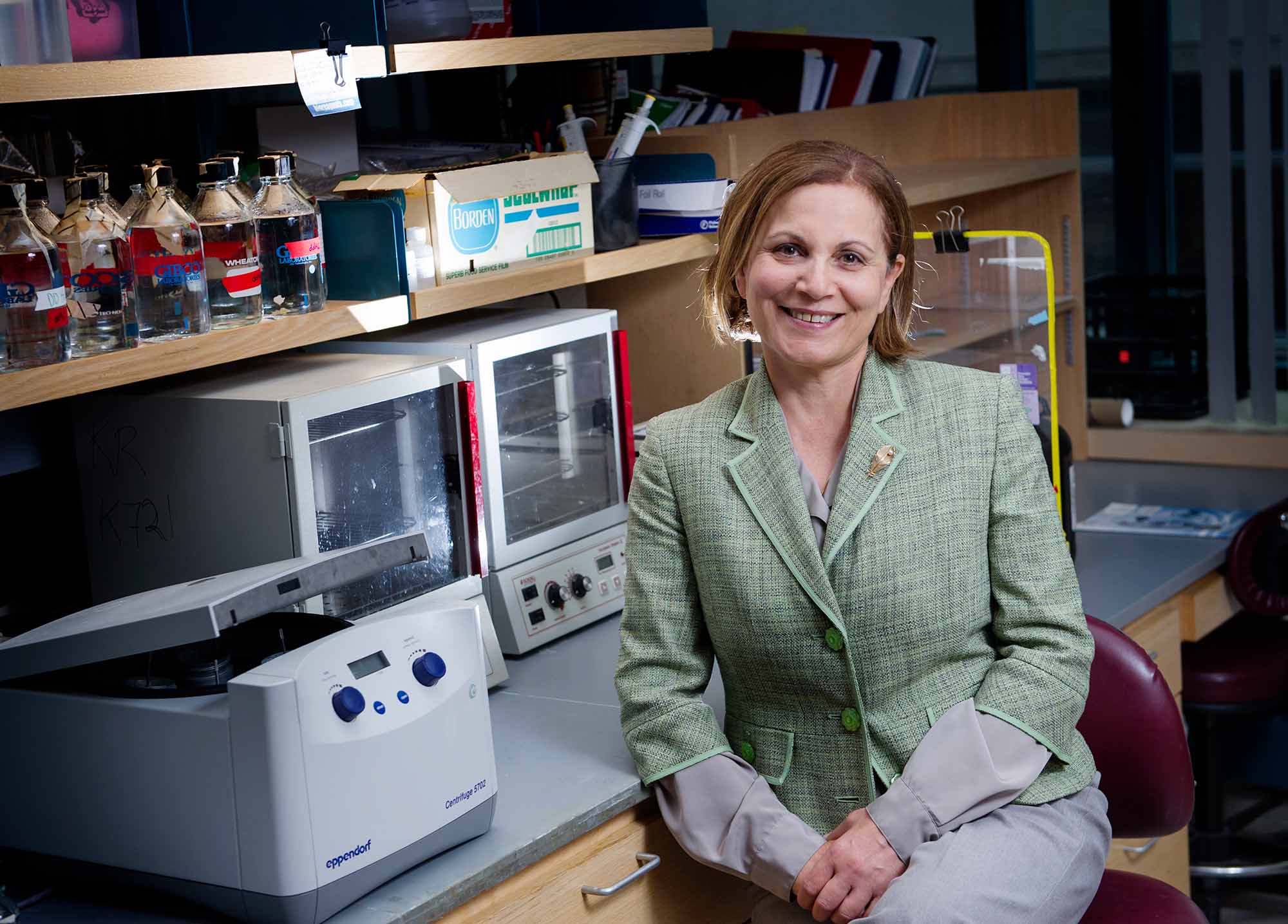 Katya Ravid, here in her lab at Boston University School of Medicine, will lead a new center tasked with uncovering why some cancer patients are at a higher risk for developing cardiovascular issues after treatment. Photo by Jackie Ricciardi

Why Are Black Cancer Patients at Higher Risk for Blood Clots?

New BU center will examine link between cancer and cardiovascular diseases, with special focus on understanding and preventing health disparities

Everyone is at some risk for developing a blood clot at some point in their lives—a condition that affects an estimated 900,000 people in the United States each year—but for cancer patients, the odds are especially higher.

Certain types of cancers drive up the risk—some blood cancers, as well as cancers of the pancreas, stomach, brain, lungs, uterus, ovaries, and kidneys—and cancer therapies can also make blood clots more likely. One of out seven cancer patients will die because of blood clotting.

And for reasons that aren’t yet clear, some Black cancer patients are at even higher risk of developing blood clots than non-Black patients.

A team at Boston University and Boston Medical Center (BMC), led by cardiovascular and disease expert Katya Ravid, has received funding from the American Heart Association (AHA) to investigate the different ways heart and blood diseases, including blood clots, emerge in cancer patients—and why the condition is more common among certain groups of patients.

“This [study] may help to better predict which cancer patients are at risk for blood clots, and to identify treatments to prevent blood clotting in some types of cancers,” says Ravid, the Barbara E. Corkey Professor of Medicine in Cardiovascular Medicine at BU School of Medicine.

The research team, codirected by Vipul Chitalia, a BU School of Medicine associate professor of medicine, has received more than $2.7 million from the AHA to open a new center at BU and BMC, called Cancer-Associated Thromboembolism as Affected by Health Disparities, which will closely examine the links between cancer and diseases of the heart and lungs. According to the AHA, there are more than 17 million cancer survivors in the United States as of 2020, making cardio-oncology a critical research area.

Ravid and a team of scientists are planning to use data from the Veterans Health Administration and BMC to investigate the biological mechanisms that cause blood clots, and to better understand health disparities that can increase the risk for blood clotting in people with cancer, including social factors like living conditions, diet, and race.

The risk of developing blood clots varies depending on the cancer type, something the team will dig into further during the four years of research. Combing through a huge amount of data—from 22 million veterans, 1.7 million of whom developed cancer—the researchers hope to find some answers. They will run cause-and-effect analyses using the data, Ravid says, and the team plans to use machine learning and artificial intelligence techniques to generate an accurate risk model for developing blood clots.

As a part of the award funding, BMC is partnering with Tougaloo College, a historically Black liberal arts college in Jackson, Miss., to develop a training program in cardio-oncology, as well as train postdoctoral fellows in this new field.

“It’s important that we pass on knowledge gained through this center, at the scientific level and professional level, to budding scientists,” Ravid says. “To me that’s part of the mission of the center.”

Why Are Black Cancer Patients at Higher Risk for Blood Clots?

Why Are Black Cancer Patients at Higher Risk for Blood Clots?
0
share this