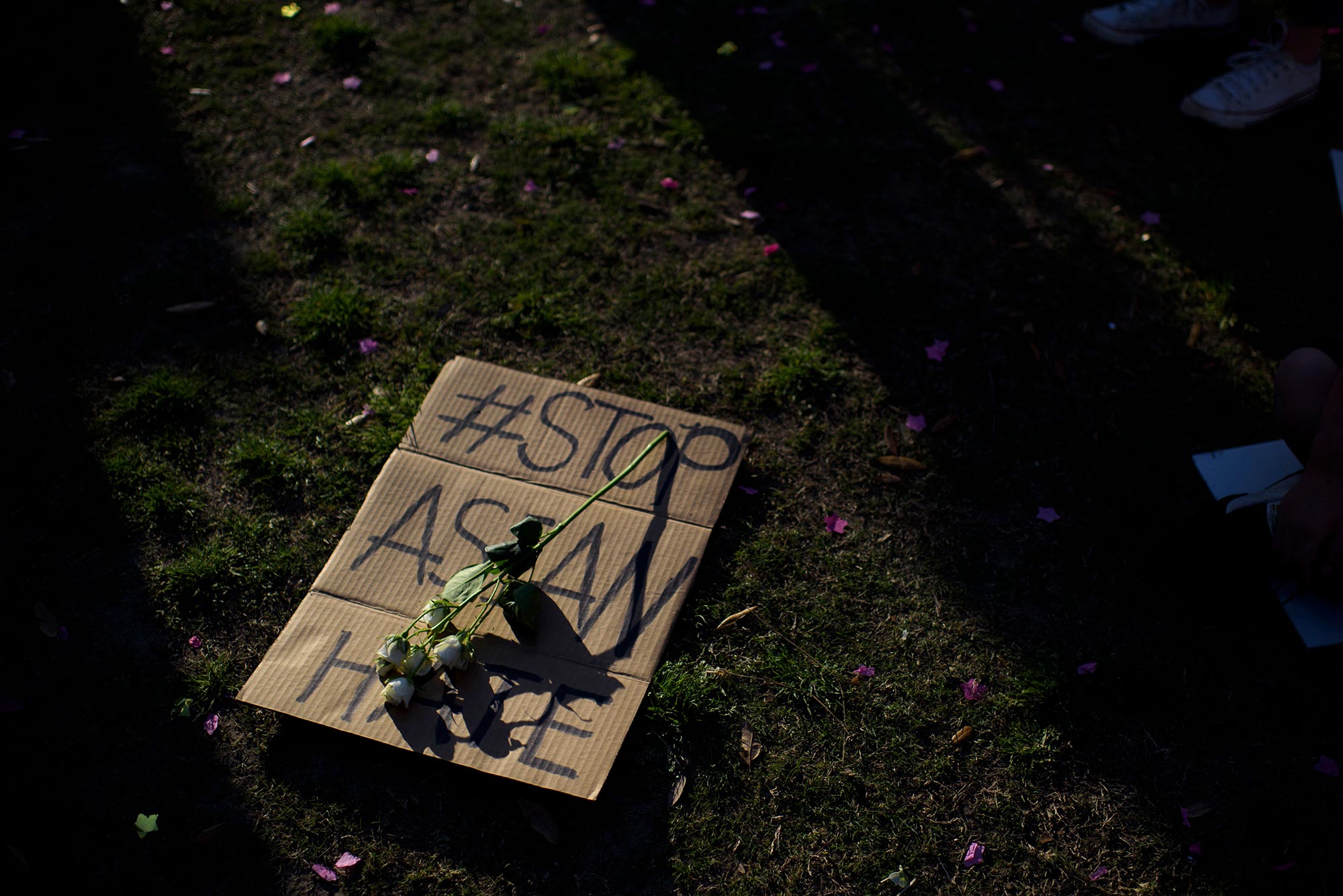 School of Social Work Professor Hyeouk Chris Hahm says that almost 70 percent of young Asians who responded to a survey said they or their family members had been exposed to some violence or microaggression, and 15 percent said they were exposed to verbal or physical assaults. Photo by Mark Felix /AFP via Getty Images

In light of recent attacks, a BU Asian health expert on the group’s experiences of racism, alienation, and anxiety

Many Asian Americans live their daily lives with a baseline unease that most white Americans rarely experience. They feel stereotyped as a model minority—smart in math and science, but poor in sports, and rarely in need of mental health resources.

That unease, says Hyeouk Chris Hahm, a School of Social Work professor and chair of social research, ratcheted up last year after then-President Trump branded COVID-19 “the China virus,” a repeated reference that has been blamed for a 150 percent increase in crimes against Asian Americans in 16 American cities in 2020. “We all felt it,” says Hahm, who is Korean-American. “I live in Newton, which is a nice community, but even in Newton, there were incidents. My Asian friends were yelled at: “Go back to your country!”

The March 16 shooting deaths of eight people in Atlanta, six of them Asian women, has left the Asian American and Pacific Islander communities not only grieving and fearful—but also organizing to raise awareness around the bias they live with daily, and to show unity.

Hahm’s own anxiety escalated last spring when she read that an Asian American woman had a chemical thrown at her and an Asian American girl was beaten by a group of boys in Brooklyn. It escalated further when Hahm’s son found the body of a dead animal in the family’s front yard. “I had seen on the internet something that happened to another Chinese couple,” she says. “Somebody had killed a cat and thrown the body in their yard. Immediately, I thought that’s what just happened to us. We called the police, and they came right away and called animal control. Ultimately, the conclusion was that a coyote had killed the animal, but until they came to that conclusion, my body was shaking. I’d never experienced such terror before.”

Hahm’s personal observations are reinforced by academic research. In collaboration with Cindy H. Liu, a Harvard Medical School assistant professor in psychiatry and director of the Developmental Risk and Cultural Disparities program at Brigham and Women’s Hospital. Hahm launched a study of young adults’ well-being and resilience last year. Out of 1,300 participants, she analyzed the responses of 212 Asian American young adults to find the impact of COVID-related anti-Asian discrimination on their mental health.

“We found that among almost 70 percent of these young people, either they or their family members were exposed to some violence or microaggression,” she says. “That included people making comments about ‘the Wuhan virus,’ or people refusing to go to Chinese restaurants or Asian restaurants because of the coronavirus.” Additionally, she says, 15 percent reported that they were exposed to verbal or physical assaults, and that was at the beginning of the pandemic. “We asked respondents to write anything they want to talk about, and many people said they had PTSD-like symptoms. They said they were in fear, and some said they had been staying in their house for weeks. Now a year into the pandemic, even more Asian Americans have experienced discrimination, physical violence, and murder.”

Hahm is a founder of the SSW Asian Women’s Action for Resilience and Empowerment (AWARE) lab. Funded by the National Institute of Mental Health, AWARE provides what Hahm describes as “culturally grounded and trauma-informed psychotherapy intervention” for Asian American women. A frequent problem, she says, is persuading Asian Americans to take advantage of resources, such as AWARE and others.

“Many Asian Americans, even though they were born in the United States, feel that there is a stigma attached to seeking help,” Hahm says. “And when they actually try to seek mental health treatment, they often find that the existing psychotherapy does not necessarily help them. That’s because it doesn’t address the ‘dual-culture’ experience of being raised in the United States, but also being influenced by Asian family and community attitudes towards mental health.”

Hahm is now developing AWARE online training courses, supported by Digital Learning & Innovation at BU, in order to teach clinicians to help Asian American women who deal with a unique set of mental health concerns, many stemming from the stereotype of Asian Americans as a model minority.

“A lot of Asian Americans worry that they would not meet the high standards as ‘model minority,’”  she says. “The common stereotype that says Asian students are great in math and science and bad in sports hurts a lot of young people. Asian students feel that they are not automatically smart; they have to work extremely hard to reach it. That creates unreasonable expectations and can cause a lot of stress.”

Hahm also sees institutional alienation of Asian Americans in the amount of research focused on their health. For the past 26 years, she says, the NIH has invested only 0.17 percent of funding altogether for clinical research for Asians, Hawaiians, and Alaskans. “That says to us that we are not worthy of attention,” she says. “We are not worthy of health improvement because we are invisible. And that goes back to the model minority issue, the belief that we don’t have problems, so why should we do research on Asian Americans or look for treatments for you?”

Hahm is convinced that the model minority stereotype can create a harmful dynamic in the broader context of other ethnic groups. It doesn’t just set Asian Americans apart from other groups, she says, it also can place them at odds with other groups.

“When the Black Lives Matter movement happened,” she says, “a lot of Asians showed their support for this movement. At the same time, Asians felt that they were not included in racial discourse conversation. Right now, for example, many people are angry about a recent surge of discrimination. They worry about the shootings of Asian women in Atlanta, which is potentially a hate crime, but there is a feeling that Asian Americans are left alone to deal with these problems.”

Hahm believes that the anxiety that many Asian Americans feel could be mitigated if Asian Americans shared a stronger group identity and felt a greater sense of solidarity and unity. “We don’t really have that,” she says. “Black people identify strongly as Black, but Asians tend not to have strong identity. A lot of Asians are not that sure where we belong. We don’t have a strong group voice.

“The bottom line,” says Hahm, “is that we are an integral part of this society. People forget that Asian Americans can be your neighbor. They are your wives, they are your husbands, or they are your best friends. We need to amplify our voices and have political visibility. We have lots of work to do.”

Asian Americans and the Model Minority Dilemma
16
share this