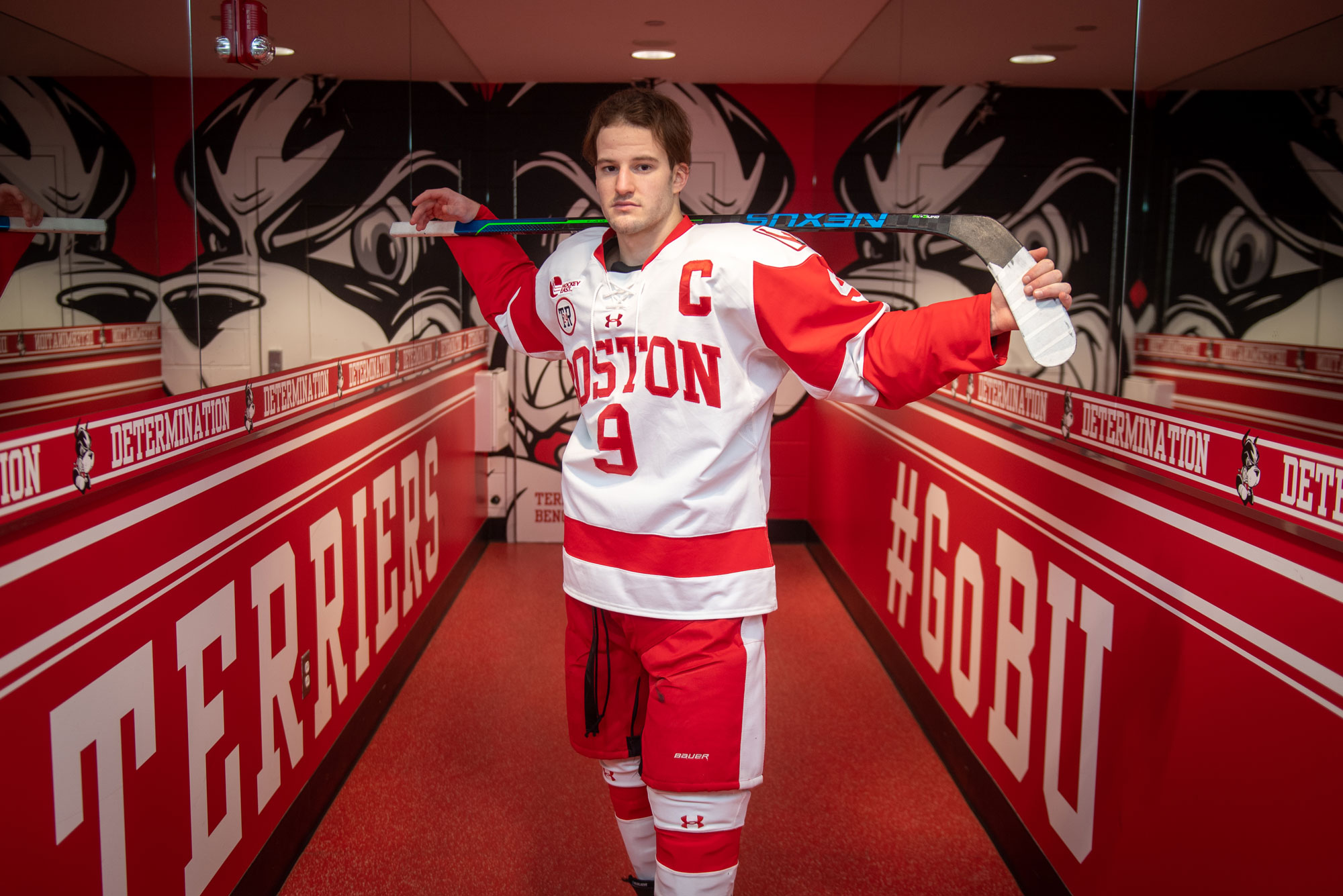 Logan Cockerill (SHA’21) credits much of the success of the men’s hockey team this season to players having “bought into playing good defense, blocking shots, and just playing for the win and not for ourselves.” Photo by Cydney Scott

Senior captain talks about a year shaped by the pandemic, playoff aspirations, more

After starting the 2020-2021 season later than any other active Division 1 program, the BU men’s hockey team has been determined to make every game count—and it shows. The Terriers are 10-3, and have cracked the top 10 in the national rankings for the first time since 2018.

Part of this season’s success on the ice can be attributed to captain Logan Cockerill. The New York Islanders draftee is setting a career-high mark in points per game this year, tallying five goals and four assists in nine games. A producer in all situations, Cockerill (SHA’21) has posted a team-best +9 rating.

Cockerill and the Terriers are nearing the finish line of the regular season, currently sitting second, behind perennial rival Boston College, in the Hockey East Power Index, which will determine this year’s postseason seeding. BU has also crossed the 13-game threshold required for national tournament consideration.

With playoffs beginning next week, BU Today spoke with Cockerill about a season shaped by the pandemic, his experience as a Terrier, and the team’s ambitions going forward.

BU Today: The COVID pandemic has made this season unlike any other. From week-by-week scheduling to mandatory testing to playing in empty arenas, how have you and the team adjusted?

Logan Cockerill: In a sense, we were kind of just thrown in the fire, where we had to understand what all the protocols were and didn’t really have any choice but to adapt. It’s kind of become our new norm. We’re used to all the protocols now; it seems like everybody’s comfortable. We’re just trying to play as many hockey games as we can at this point.

What do you think is the reason for the team’s success this season?

Definitely our buy-in. I think this year we’ve really bought into playing good defense, blocking shots, and just playing for the win and not for ourselves. I think that along with our depth and how many good players we have on our team, it’s just tough for teams to stay with us.

The team has been getting more  national attention this year than in recent seasons. Can you talk about that?

It’s been frustrating a little bit over the past couple of years because we always thought we had more to bring to the table, but everything’s just really come together this year. I think we have a lot of guys who really care about winning. They understand what we’re trying to do here, trying to bring BU hockey back to a top-tier team in the country.

How has your experience as captain been so far, especially in this unprecedented year?

It’s been awesome. It’s an honor to get to the “C.” The first few weeks or so, it was a new thing to adjust to, having a lot more responsibility and really trying to be the leader and in the forefront on the team. I think it’s something I’ve adjusted to well. I really take a lot of pride in it.

What has it been like to share the ice and team leadership with your roommate, and an assistant captain, David Farrance (CAS’21), a 2020 Hobey Baker Award finalist for best player in the country?

I’ve been playing with Dave since I was a junior in high school, so it’s our sixth year in a row now. It’s been cool to see Dave mature and the way he’s developed as a player. It’s fun to see how high a level he’s come to now, being one of the best, if not the best—player in college hockey. It’s been cool to see that progression and see him really excel.

On the other end of the lineup, all seven freshmen on the roster—including two goalies—have had significant roles this season. What is your impression of them?

It’s always fun to watch the freshmen develop. They’re really starting to find their stride, and they’ve adjusted to what we’re trying to do as a team. And now they can kind of bring their own individual creativity out and showcase their skill sets.

You spent much of last season sidelined by an injury just two games in. What was that experience like?

It was a tough junior year, especially because I worked so hard in the off-season and when I came in for those first two games, I felt like I was where I wanted to be. I don’t think I really ever got back to where I was at the start of the year, so it was nice to have another really good off-season and be healthy this year. I’m so grateful for that.

Your return as a senior has seen you suiting up for almost every game, and you’ve averaged a point per game on five goals and four assists. What do you attribute your strong performance to?

I’ve had great confidence this year. I really wanted to bounce back, so in the off-season I had that in the back of my mind and was really committed to helping my team out in whatever way I could. Things have just gone my way this year, and it’s nice to see myself get rewarded for some of the hard work I put in.

Approaching the playoffs, it’s still unclear what the final standings will look like and how the NCAA Tournament field will be selected. What is the team’s mentality amidst this uncertainty?

We feel like we can compete and play with anybody in the country, without a doubt. One of our mottoes at this point is: taking it one game at a time. You can’t affect the next game, so you just have to worry about the opponent that’s in front of you and keep trucking along.

What are your post-Commencement plans?

I’m not completely set on anything, but that’s a decision that I’m going to set aside for another time. Right now, the focus is just on the team and what we can accomplish this year.

What would it mean to you to finish your senior year with a trophy?

It’s been the goal since we arrived on campus in September. It seems like it’s been a long time, but we’re finally pretty close. It’s been a few years since we got a Hockey East title, so I’m looking forward to seeing how deep of a run we can make this year.

The men’s hockey Terriers conclude the regular season this week when they play UMass Lowell on the road on Saturday, March 6, at 3 pm. The game can be streamed on CollegeSportsLive.com and the Terrier Sports Radio Network.