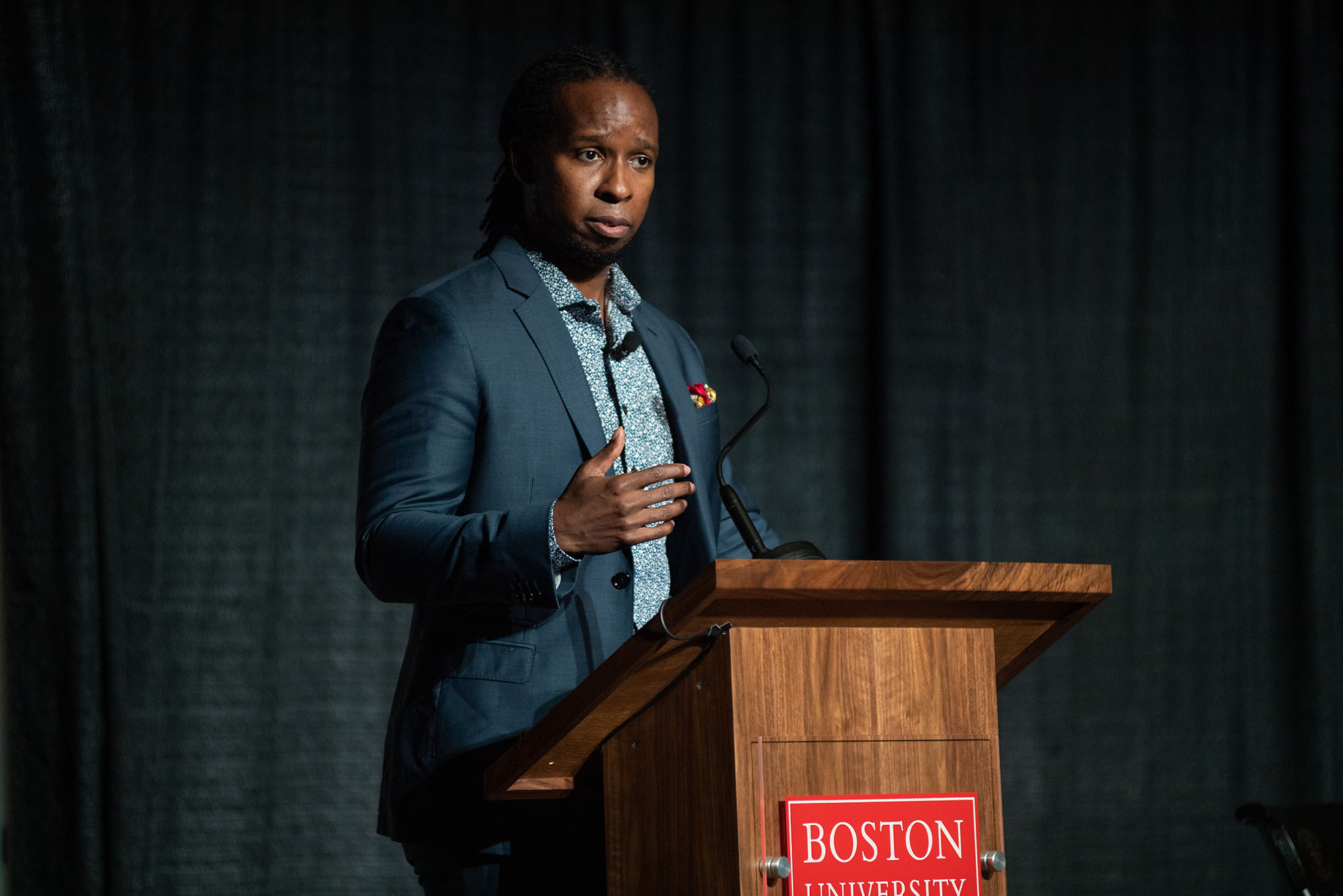 Ibram Kendi, founding director of BU’s Center for Antiracist Research, welcomed attendees at the center’s symposium, What the Science Tells Us: Racial Health and Economic Inequities During the Pandemic. Photo by Cydney Scott

The Center for Antiracist Research held a star-studded symposium on Friday at the George Sherman Union Metcalf Hall. Among the speakers were Rochelle Walensky, Centers for Disease Control and Prevention director; Marcella Nunez-Smith, chair of the presidential COVID-19 Health Equity Task Force; Reshma Kewalramani, Vertex CEO and president (a BU alum); Boston Mayor Kim Janey, and of course, the center’s founding director, Ibram X. Kendi. Congresswoman Ayanna Pressley (D-Mass.) was scheduled to speak, but she was called away at the last minute to meet with President Biden.

The symposium, What the Science Tells Us: Racial and Health Inequities During the Pandemic, was the first large-scale public event held by the center since it launched in June 2020 and was supported by its founding partner, the Vertex Foundation. The message from virtually all the speakers, who included BU public health, science, and economics researchers as well as public and private sector health leaders, was consistent: when it comes to racial and health inequities in this country, the time for documenting and debating the problem is past. Now is the time for finding solutions.

“I don’t want to document the problem anymore,” Walensky said. “We know we have a problem. We need to start looking at interventions to fix the problem.”

Kendi, BU’s Andrew W. Mellon Professor in the Humanities and a College of Arts & Sciences professor of history, echoed Walensky—and the mission statement with which the launched the Center for Antiracist Research at BU. “We have to get to a point in which we’re trying out big, bold solutions to seemingly intractable racial problems,” said Kendi, who just three days earlier was awarded a MacArthur “genius” fellowship in recognition of his contributions—and promise—toward the betterment of humankind. “We have to move from a period of awareness to action. That’s what we’re trying to do at our center, that’s what’s happening at the CDC.”

BU President Robert A. Brown took the stage as well, welcoming the more than 1,000 attendees (roughly 150 people were in the GSU audience, while nearly 900 tuned in from around the country). Congratulating him for his MacArthur fellowship, Brown introduced Kendi, who moderated the first panel, on racial health and economic equity, with speakers Nunez-Smith, Peter Slavin, former president of Massachusetts General Hospital, and Thea James, a BU School of Medicine associate professor of emergency medicine and Boston Medical Center associate chief medical officer.

The first speakers, and those on subsequent panels, reflected the shift in conversation since the onset of the pandemic more than 18 months ago: the call by Kendi and others who were once considered outsiders to address the racial inequities behind the pandemic, and beyond, is now being taken up at the highest levels of government.

“COVID-19, we know, took advantage of what were preexisting structural inequities,” Nunez-Smith told the audience. “We’ve all had a collective witnessing to that in the past 18 plus months, and we cannot unsee what we have all seen… And that disproportionate burden—I long for the day when I don’t use that [term] anymore, when we can finally disrupt the predictability of who is always harmed first, and who is harmed worse.”

Equity is one of the core principles of the Biden administration, said Nunez-Smith, who is also senior advisor to the White House COVID-19 Response Team. She reminded the audience that among the executive orders Biden signed on his first day in office was the one creating the COVID-19 Health Equity Task Force. “And that was expressly saying that we bring together voices inside and outside the US government to come up with recommendations to mitigate those inequities now and to create resilience so we don’t see these inequities in future pandemics,” she said. “The task force holds as its north star: what are the systemic problems, what are the systemic solutions?”

During the keynote panel—which was to have included Pressley—Kewalramani (CAS’98, MED’98) asked Walensky about a recent bill introduced by Pressley, along with US Senators Elizabeth Warren (D-Mass.) and Barbara Lee (D-Calif.), that would establish a national center for antiracism on health within the CDC. Walensky said she looked forward to partnering with Pressley and the other bill sponsors.

“When I came in, we declared that racism is a serious public health threat,” Walensky said. Her team has created a core strategy “that cultivates comprehensive health equity science, optimizes interventions, reinforces and expands robust partnerships, and enhances capacity and workforce engagement,” she said. “I’ve said that we need to weave health equity into everything that we do, in every center across the CDC, in everything in health.”

Last spring, Walensky said, she called for proposals from across the CDC for ways to address racial health inequities within a one-year period. More than 150 proposals have poured in and are being vetted now, she said. “We’re going to establish the science. Some things will work, some won’t. We’re going to learn. Everyone’s been energized, everyone wants to do this.”

Among other points made by the symposium speakers:

The chair of the symposium was Monica Wang, Center for Antiracist Research associate director of narrative and an SPH associate professor of community health sciences.

“Hopefully we’ve learned from the pandemic how interconnected our health is. That’s how we’ll be able to build and support policies that are beneficial for the community and to be less concerned for the individual from the standpoint of that person’s ability or freedom to wear a mask. I’m sorry, but it should be about the community.

Then, with a sheepish smile, he said, “Okay, I’ll get off my soapbox now.” The attendees in the auditorium gave him a warm round of applause.

In his closing remarks, Kendi addressed the audience, at the GSU as well as online: “I want to encourage everyone to be constantly thinking: how can we solve this problem and come up with solutions to eliminate racial health disparities?

There are 4 comments on Message from Antiracism Symposium: “Move from Awareness to Action”

Message from Antiracism Symposium: “Move from Awareness to Action”
4
share this