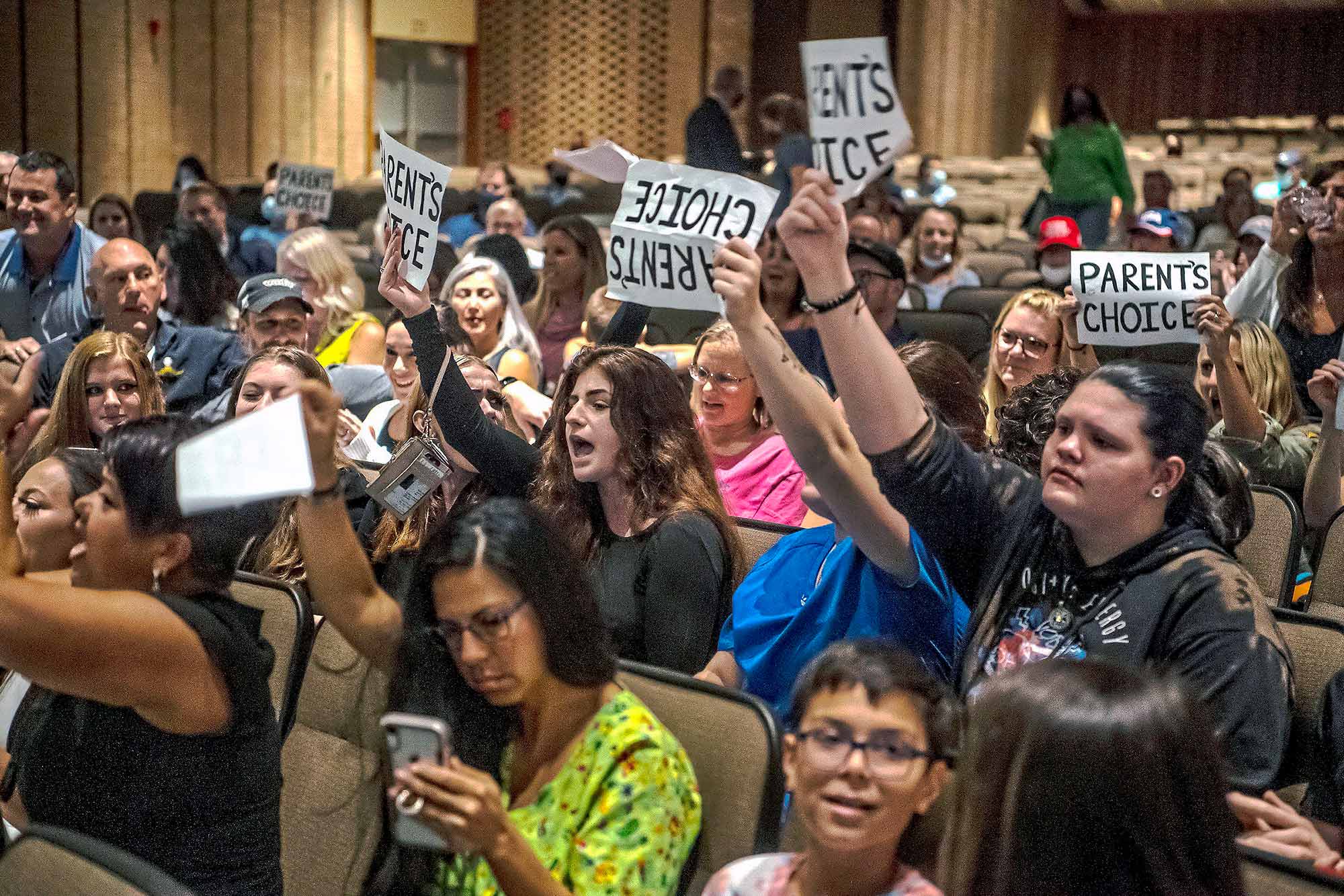 Anti-mask parents forced a Pennsylvania school board meeting to be postponed August 25 because they were, well, unmasked—one of several mask protests nationally that have turned verbally, and sometimes physically, violent. Photo by Alexandra Wimley/Pittsburgh Post-Gazette via AP

Anti-Maskers Are Assaulting Teachers and School Leaders. What Can Be Done?

A California teacher is hospitalized after an alleged attack from a parent the teacher tried to restrain from assaulting a principal over masks in school. Anti-masking (and unmasked) protesters yell angry taunts at Kansas school officials, comparing them to the Taliban. Police respond to school board meetings in Pennsylvania and Nevada when enraged anti-mask audience members become verbally aggressive.

It has been a back-to-school like none other. A pandemic that was in the rearview mirror two months ago, but refuses to end, has stirred up a mask-vs.-anti-mask culture war. The closest analog, the 1918 flu pandemic, saw many public schools simply close—and those that didn’t, clash with fearful parents wanting to keep their kids home. Schools then monitored students for illness but didn’t use masks.

But violence? That’s taking things to an extreme nobody anticipated. How can we get cooler heads to prevail? That’s the question BU Today asked Eleonora Villegas-Reimers, a Wheelock College of Education & Human Development clinical professor and chair of special and elementary education.

BU Today: Are you aware of any precedent for such verbal or physical assaults on teachers and administrators over a controversial public policy?

Eleonora Villegas-Reimers: Definitely not at the level that we are seeing them right now. There have been tense situations at times between parents who have disagreed with a particular decision of a school or a district and teachers and administrators who have had to defend those decisions. They go from personal issues—such as getting a child assessed for a potential learning disability or a parent who dislikes a teacher’s racial or ethnic group—to more widespread issues. Parents have been against decisions like closing a school or firing a principal, but nothing as widespread and public as the attacks we are seeing now as a result of the mask and vaccination mandates.

BU Today: How might teachers de-escalate confrontations with parents? What else besides de-escalation can they do?

Eleonora Villegas-Reimers: Preservice teachers do learn how to de-escalate situations with students and family members. It is one of the hardest things for preservice and new teachers to practice, and yet increasingly an important aspect of their education. Teachers are taught to remain in control of their own emotions, to control their own behaviors, to set boundaries and limits, to state facts, and to ask for support from other adults in the school buildings. In teacher preparation programs, we teach preservice teachers to pay attention to their own socio-emotional needs and those of their students and their families. They learn that trauma and anxiety trigger very negative behaviors, and they learn how to redirect behavior and attention, organize environments to minimize triggers, and to create environments where students feel emotionally and physically safe, as that decreases misbehaviors.

That can be extended to families too, but I am not sure that we have prepared teachers [for] such negative, generalized reactions from groups of parents. This is new territory, and something we will need to add to our list of skills teachers must learn. It is unfortunate.

BU Today: Is there evidence of widespread student anxiety about, or educational problems with, masks? Or rather, is this an issue of some parents snapping under the stress of a prolonged pandemic?

Eleonora Villegas-Reimers: I am not aware of evidence of widespread student anxiety caused by wearing masks. I understand that there may be a few people who have some forms of anxiety disorders and wearing something that covers their nose and mouth may be very uncomfortable and triggering, but that is not true for the majority of people.

It is unfortunate that the use of masks has become a political issue. That is the only logical explanation for the refusal we see in this country. We live in a society that values individual and social freedoms, and yet we require that people wear clothes and cover parts of their bodies. No one considers that an attack on their personal freedom. We have public regulations that protect the health of others; think about regulations that govern public places that sell and serve food or that offer services such as medical care or manicures, etc.

I also think that the negative reaction of families to mask requirements is caused by a need to feel in control of their own lives. The pandemic has cut the sense of control that people have, and they are focusing on this as one small detail they still want to have control over. It will be important to show how masks prevent illness and death and the other ways policies are enacted to protect the public. Presenting wearing masks as a way to take control over what is going on could help a little. It is also very important to remove, as much as possible, the political associations between masks, vaccines, political parties, and political figures. We need other public faces—not politicians—to take a stand publicly.

Anti-Maskers Are Assaulting Teachers and School Leaders. What Can Be Done?

There are 2 comments on Anti-Maskers Are Assaulting Teachers and School Leaders. What Can Be Done?

Anti-Maskers Are Assaulting Teachers and School Leaders. What Can Be Done?
2
share this