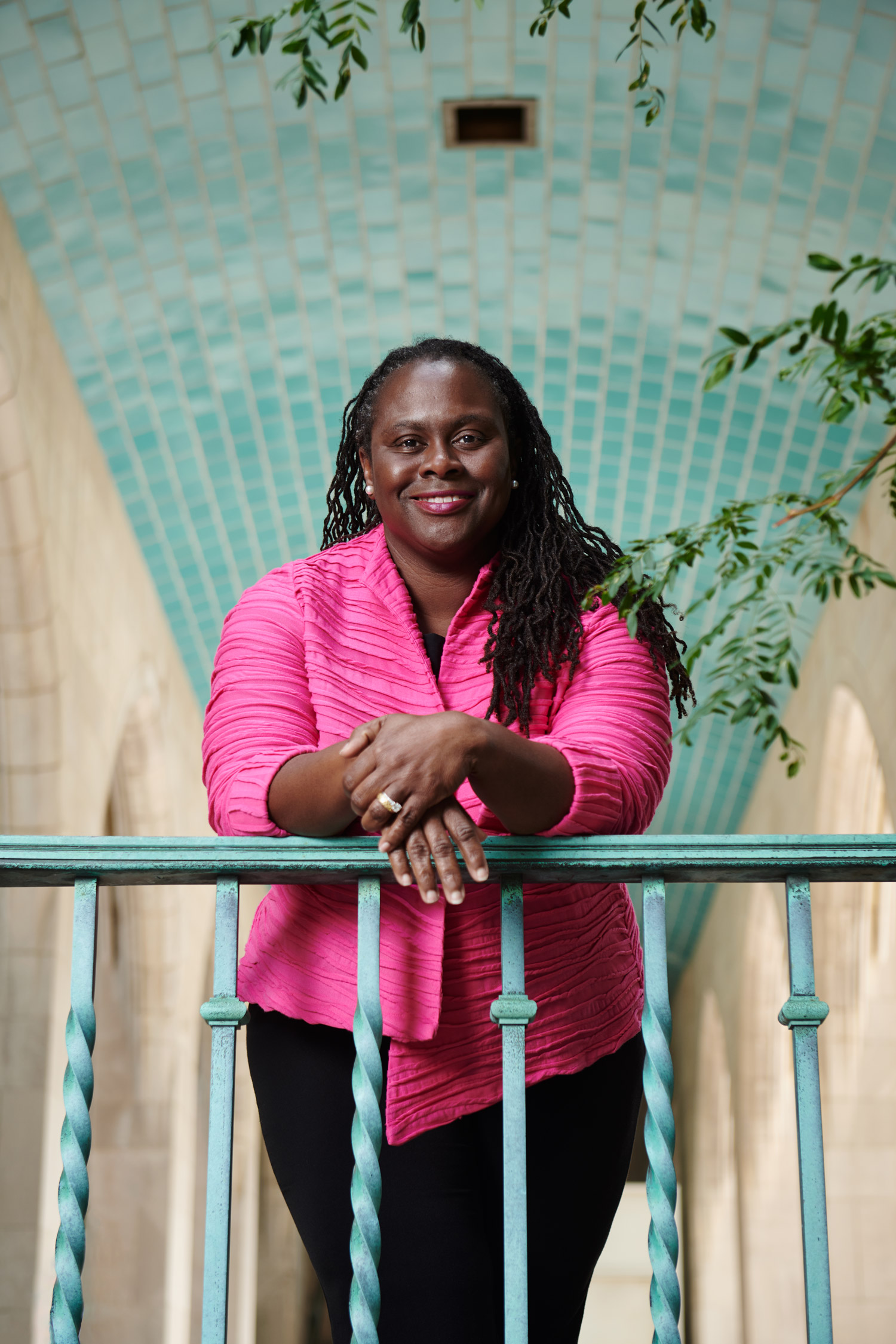 Angela Onwuachi-Willig, BU School of Law dean and a professor of law, one of the country’s leading scholars of race and the law, is one of five Black women law deans to  receive the Association of American Law Schools inaugural Impact Award. Photo by Doug Levy

Together, they launched a project to engage law schools in fight for racial justice

Angela Onwuachi-Willig is one of the country’s leading scholars of race and the law, but in a letter addressing her students after the killing of George Floyd, she confessed that she had struggled over what she would say to them. As a Black woman and a law school dean—the first dean of color at Boston University’s School of Law and first Black woman to lead a top-20 law school—Onwuachi-Willig wrote that she wondered if she could say anything publicly, “imagining the backlash when certain words come out of my Black mouth.

“Perhaps surprising to some of you, racism regularly disempowers the seemingly powerful dean,” wrote Onwuachi-Willig, who was appointed as dean, and a professor of law, in 2018.

Her letter, in which she spoke of her anguish over the never-ending cycle of state violence against Black people, and of her fears for her two Black sons and one Black daughter whenever they step outside, was only the beginning. She and four other Black women law deans—Danielle M. Conway, Penn State Dickinson Law; Carla D. Pratt, Washburn University School of Law; Danielle Holley-Walker, Howard University School of Law; and Kimberly Mutcherson, Rutgers Law School—had all encouraged each other to come forward. But now they wanted to move beyond public statements, to engage law schools in the fight for racial justice through teaching, scholarship, admissions, faculty hiring, and activism.

With support from the Association of American Law Schools (AALS), they created the Law Deans Antiracist Clearinghouse Project, a website that would serve as a space for their collective voices; provide resources to help colleagues, students, and the public learn about race and the law; and hold themselves and other law school leaders accountable for bringing about antiracist reform.

Their project galvanized an outpouring of support from law deans and faculty across the country; some schools have already taken steps to add antiracist pedagogy to the curriculum, recruit more faculty of color, and bring greater diversity to their student bodies—future members of a profession that remains overwhelmingly white.

Now, the AALS, the leading membership group for US law schools, has honored Onwuachi-Willig and her four colleagues with its inaugural Impact Award. “These five extraordinary deans acted decisively in a moment that required a meaningful response from all of us in legal education,” providing resources “to support our work in building an antiracist future for our law schools, for our profession, and for our society,” said Vincent Rougeau, AALS president-elect and Boston College Law School dean, at the January 5 awards ceremony, which was held virtually due to COVID-19.

“As my colleague, Ibram Kendi [founding director of BU’s Center for Antiracist Research], has taught us, there is no neutrality in the struggle against racism,” Onwuachi-Willig said at the ceremony. “There is no being not racist. One is either racist or antiracist and by extending this award to the five of us—five Black women, five Black women deans—AALS has extended the force and power of its name and influence behind our voices and the voices of all others engaged in antiracist work.”

The Law Deans Antiracist Clearinghouse Project came amid last summer’s national reckoning over race. “Everyone was talking about wanting to change things and asking what they could do,” Onwuachi-Willig told BU Today in a recent interview. “We said, ‘Well, let’s lay out the steps. Here’s a place you could start.’”

The website was also intended to relieve students of color of the burden of educating their peers on race, says Onwuachi-Willig. “I’m an educator,” she says. “I’ve chosen to do that. But our students haven’t chosen to do that. We wanted to say, ‘Here are these resources and part of what it means to be antiracist is not to further burden people of color, and particularly not students and junior faculty of color.’”

The project’s website recommends reading materials ranging from the writings of James Baldwin, bell hooks (pen name of Gloria Watkins), Angela Davis, Brittney Cooper, Ta-Nehisi Coates, and Kendi to scholarly papers, including Onwuachi-Willig’s “Trauma of the Routine: Lessons on Cultural Trauma from the Emmett Till Verdict,” as well as the music of Bob Marley, Billie Holiday, Public Enemy, and Lauryn Hill.

Change begins with listening, says Onwuachi-Willig. “Before one can lead others in combating systemic racism,” she said at the awards ceremony, “one has to stop to listen to Black deans, indigenous and Latinx deans, and others whose lives are personally affected by police violence.

“Listening can be particularly hard for whites, who in our society are used to having their experiences defined as the norm and who are used to understanding and seeing themselves as raceless and people of color as those who have a race,” she said, adding that she is grateful to those who are allies.

“I’m seeing white deans saying and writing things I have never seen or heard before,” she told BU Today, citing William P. Johnson, dean of the Saint Louis University School of Law, a Jesuit institution, and his message to alumni, in which he pledged to address his school’s “unacceptable” overwhelmingly white demographics, apologized for his own white privilege, “as a white man, [who has] too often been given a platform to speak that I had not earned and did not deserve,” and who said he was now focused on “listening to, learning from, and amplifying Black voices.”

One of the voices he and other law deans are listening to belongs to Onwuachi-Willig, who in December 2020 was shortlisted for the US Supreme Court, in an op-ed on the National Law Journal’s website, along with eight other “impeccably credentialed and widely published” Black women law scholars.

“The idea that a law dean is supposed to talk about race—until recently that was mostly off limits,” Onwuachi-Willig says, recalling her struggle to find her voice after George Floyd’s death. “When people thought about what a dean should be, how they should speak, how they should act, they were thinking about a white man. No one imagined me [a Black woman] as a law dean. I was being bound by rules in a position that assumed I wouldn’t be personally impacted by the George Floyd killing.”

And yet, as she wrote in her letter to students, she was personally impacted. “We all were,” she says, speaking for herself and the other four deans and their Black colleagues. “We, any one of us, knew we could have been George Floyd.”