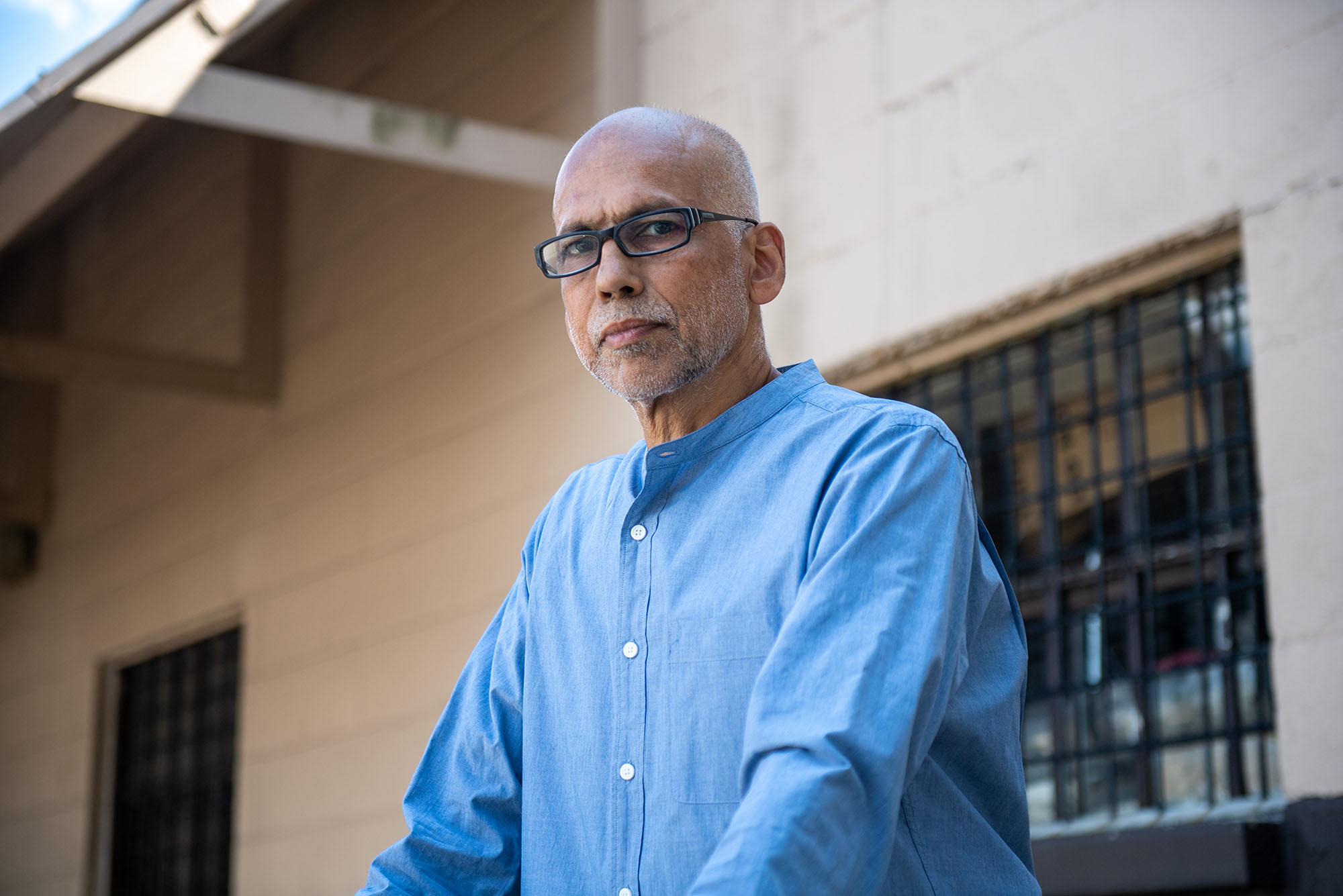 André de Quadros is recognized for his “lifelong commitment to inclusion through teaching, scholarship, advocacy, and artistry,” as well as the many partnerships and communities he regularly collaborates with. Photo by Cydney Scott

It’s about much more than just making the music. To André de Quadros, giving people space to create, write, sing, move, and connect with one another is what matters the most, both in his classrooms at BU and across all the other parts of the world that he influences. His local and global work as a music educator, choral director, composer, and researcher is driven by justice, diversity, and community—especially for marginalized people in prisons, in the Arab world, and on the US-Mexico border.

In honor of his career-long dedication to these vulnerable communities, Chorus America—a professional and advocacy organization with the mission of advancing the choral field—has awarded de Quadros the 2021 Brazeal Wayne Dennard Award.

According to Chorus America, the award “honors the life and achievements of educator, conductor, and arranger Brazeal Dennard by recognizing individuals or organizations whose work builds upon his commitment to diversity, inclusiveness, and furthering African American and other diverse choral traditions through performance, research, or the creation of new compositions of significance.”

In naming de Quadros the 2021 award winner, Chorus America is recognizing his “lifelong commitment to inclusion through teaching, scholarship, advocacy, and artistry. Through his work on faculty in the Department of Music Education at Boston University and beyond, de Quadros celebrates diverse choral traditions from around the globe and expands the definitions of choral practice to include the voices of those on the margins.”

For more than a decade, de Quadros, a Boston University College of Fine Arts professor of music and music education, has taught in BU’s Prison Education Program, impacting scores of students living inside the prison system. This year, de Quadros has been a coleader of BU’s Race, Prison, Justice Arts project, which through art-making aims to foster dialogue about race and justice between students, faculty, staff and currently or formerly incarcerated individuals.

Based on his research, de Quadros was lead author of a book published this year, called Poking the WASP Nest: Young People, Applied Theatre, and Education about Race, that looks at how an Australian youth theatre group used performance to challenge its local community to rethink racist assumptions.

Perhaps, “the arc of justice is tilting,” he says. “I don’t think 20 years ago people recognized how important it is to work in this area of justice, equity, and diversity.”

The Brink recently caught up with de Quadros to hear more about his work.

The Brink: What does winning this award mean to you?

André de Quadros: Honestly, I was surprised. I am an immigrant, and most of these awards go to Americans [born here]. So, it was surprising to me in a good way.

[This] award made me understand that the arc of justice is tilting. I don’t think 20 years ago people recognized how important it is to work in this area of justice, equity, and diversity. And, of course, my work is collaborative. I’m always engaging in projects with other people. There’s nothing that I’m doing by myself. So, if someone is giving me an award, I think of the people I work with, those who I colead with, the folks in prison, the refugees, the Israelis and Palestinians who are coleaders with me [in one of my ensemble projects]. The award recognizes all of these partnerships. The problem with awards is that they only recognize one person…but I am part of a group.

The Brink: What is it like teaching [music] in prisons right now with the pandemic ongoing?

André de Quadros: We’re kind of in limbo [teaching virtually and waiting to return in person]. I was just on Zoom with [students from] the Framingham women’s prison. We’ve been doing a lot of [creative work] by digital means, by phone, email, and regular mail. Sometimes incarcerated people send poetry or short stories by hard copy mail. We expect [prisons] to open back in person in the spring.

The Brink: What do you miss most about in-person interactions?

André de Quadros: Oh my goodness, I miss everything there is to do with being together physically. I miss that I can’t hug my grandson, for example. Facetime, Zoom, all of that, is not the same kind of intimacy. It’s the next best thing, but there’s no substitute for the physical proximity—you connect through body language, you can think differently. Zoom is fundamentally different, particularly for creating artwork and being creative together.

The Brink: What is the most rewarding part about teaching people who are incarcerated?

André de Quadros: First, it’s seeing the way people express hope. In the depths of despair, people want to hope. That doesn’t mean there is no darkness, but they want to hope even in the most desperate circumstances. I received a phone call from a student in prison a short while ago, and I asked how he was doing, and he said he was fine. I asked, has anything changed in the last three years, do you have access to clean water, or is it the same food? He said nothing had changed. But he said he was fine because he has [learned] how to be resilient and how to hope.

The other is love. I think of Martin Luther King, Jr.’s vision for building a loving community. There are so many people in prison that still think about building a beloved community…creating affectionate and tender relationships in prison and out. My work’s foundation is a pedagogy of love.

Lastly, I also think of anger. I think anger is really important. Saying there’s a place for anger—Angela Davis and James Baldwin have talked about anger and how being angry is a way in which we understand that we’re not satisfied with the world we have…. The world we want is something else, and to be angry about the brutality and racial injustice is an appropriate way to feel, and sharing that anger is important.

The Brink: As an ensemble leader and teacher, how do you choose what pieces of music to teach, especially since your influences span many different cultures?

It all goes back to, what story are we trying to tell? [Historically] the pieces that people tended to choose were basically white people’s music—that’s what’s happened in the past. What I’ve been doing for the last three decades is shining a light on non-white music.

I’ve had 50 editions in non-Western choral music published, which is partly what I’ve become known for. My colleagues and I started Common Ground Voices, which is a peace building [ensemble] project between Israelis and Palestinians. For a project like that, [the music is] always about the context. I’ve been working with Israelis and Palestinians for a long time to generate dialogue, and we think about what we perform and the relationships [between the performers] in terms of peace building.

Another [ensemble] project I colead at the US-Mexico border [is] called [Common Ground Voices/La Frontera], [and] all that we do there is related to what it means to be at the border and to be a witness to the brutality, suffering, and the search for dreams.

At the beginning of 2020, my colleagues and I led a project about transgender refugees at the border…. we asked them about the song, “Over the Rainbow,” which has that line, “if happy little bluebirds fly beyond the rainbow, why, oh why can’t I?” We [spoke to the] transgender refugees about how they relate to this text…. It’s amazing for these trans folks, this idea of having this freedom to fly, be themselves—if others can be protected, why can’t I? Why can’t I have the same human rights that other people experience? This led us to develop a repertoire around that question, “Why can’t I?”

The Brink: Do you write and compose music, as well?

A lot of my creative work is in the context of improvisation. Not all of it is notated. I think when [most people] think of writing music, we think of putting pen to paper, and I don’t do that as often. It’s more [about] creating in real time with a group of fellow human beings who stand for justice.