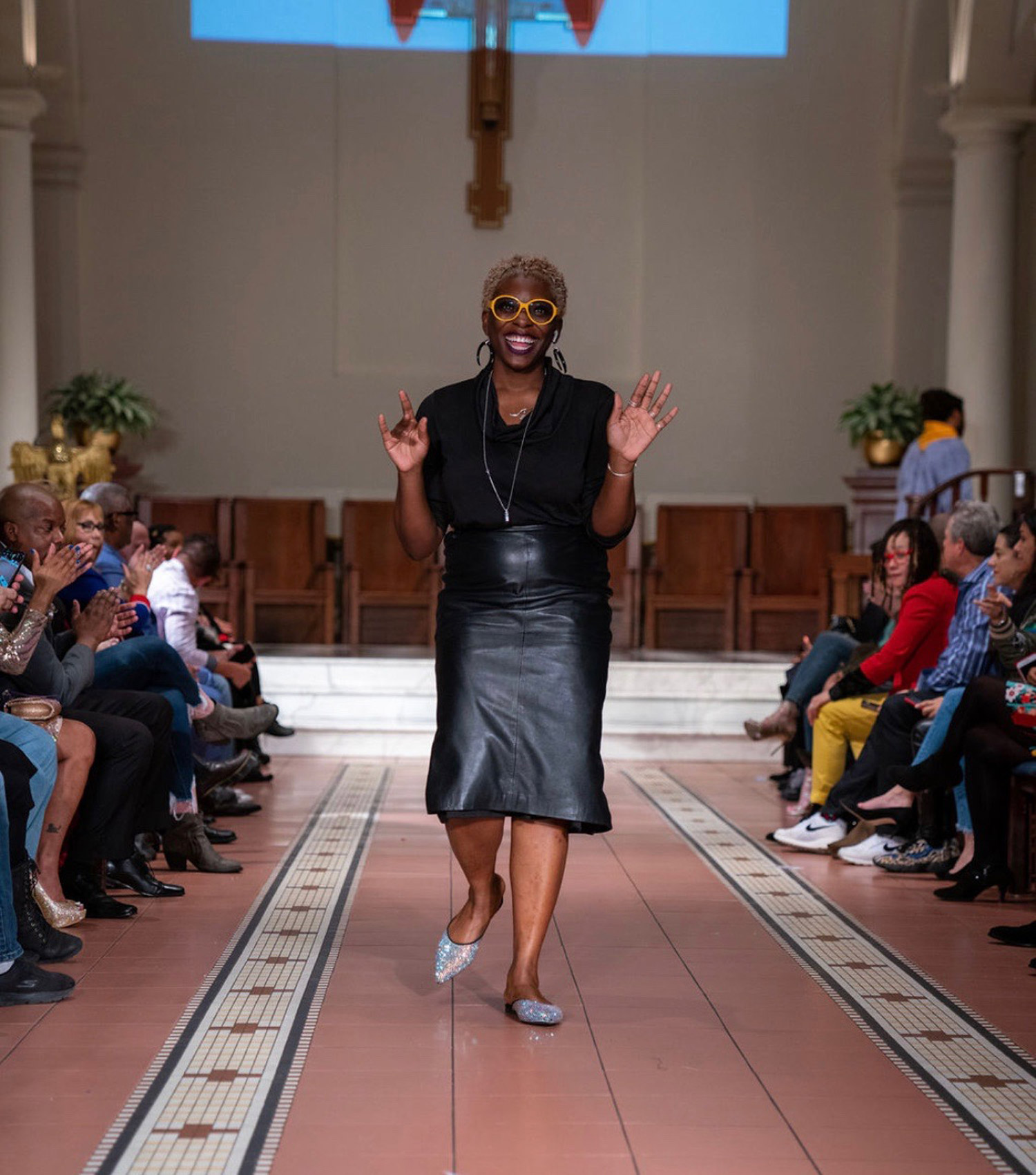 Growing up outside of Fort Worth, Tex., Abiola Agoro has loved fashion since she was little. She was just nine, she says, when she started selling her own jewelry, which she made from polished stones she and her mother purchased at local mineral shows. They sold the jewelry from a store they rented next to their church. When she arrived at BU, Agoro’s interest expanded into fashion styling, and she launched her own mobile boutique and styling service, Styled by Ola, that offers personal styling services, customized jewelry, and clothing. Her work has been seen in numerous runway shows, including at New York Fashion Week.

Agoro (CAS’21) is about to embark on an even bigger venture: launching a new online clothing line designed and made by her, to debut June 19. The line, called Ruthanne, is named for her maternal grandmother.

“My middle name is Ruth Anne and my grandmother’s name was Annie Ruth. So the [brand name] is like an ode to my grandmother,” Agoro says. “She was just a badass woman, so I wanted to do a brand that honors her and honors the name.”

The fashion line features a variety of 1970s-inspired gender-neutral clothing, items like bell-bottom jeans, shirts, and jumpsuits, in addition to recycled and refurbished fur pieces. Prices range from $25 for accessories to $800 for garments like gowns. Ultimately, Agoro says, she wants her apparel to push the boundaries of what’s considered feminine and what’s considered masculine. For inspiration, she looks to West African culture—where men wear skirts casually—and the 1970s, when men and women both wore platform shoes.

“Some things are very much gender-oriented in West African culture, but men can wear things there that are considered extremely feminine here, and that’s not a problem,” Agoro says. “So I want to release clothing that does that, that questions [gendered boundaries].”

Agoro is Nigerian American: her father is from Nigeria and her mother is from LA. Both cultures inform her work. She also wants Ruthanne to be a brand that celebrates Blackness and invites others to join in that celebration. She grew up in rural Texas and spent much of her adolescence trying to blend in with the white spaces around her. Her brand, she said, counters that narrative of needing to assimilate. During high school, she began to embrace her skin color and the elements of Black culture she had been too timid to accept before.

“I think what’s framed more of my philosophy now is making things that feel truthful to me in my Black experience, while also being able to pull on other people’s experience and give respect to those other experiences,” Agoro says. “And to acknowledge the vastness of who we are, because Black people are not monolithic.”

“I think sometimes people hear something is a Black brand, and think, okay, it has to be all Black people wearing everything, and only Black people can buy the clothes,” Agoro says. “No, what it is is making sure that Blackness can be centralized without being commodified, without being taken over, and still be accepted in a way that is beautiful while being on Black people too.”

Agoro first tried making clothes (using drapes and safety pins) when she was a child. But it wasn’t until her junior year at BU that she became serious about designing and making clothes in addition to styling. She began using her savings to buy material and take online sewing classes.

While her venture eventually turned into something she loved, it started out as a way to help her deal with an anxiety disorder diagnosed sophomore year. She says that designing and sewing clothes gave her a new creative outlet.

She began sketching designs, and eventually, started making clothes. Sometimes her efforts turned out beautifully, leaving her awestruck, she says, other times, the final outcome looked nothing like she had imagined.

Agoro says she’s developed a new perspective on her ability to create art. She once believed she had to be in pain in order to create something that was genuine and moving, but realizes now that she can create from a sense of joy.

“I’m just now getting a balance of it,” she says. “There are some times where I get frustrated and won’t sew for two weeks, just because I’m sad, and I can’t. But it’s definitely so much better, and I’m able to do art from both a happy and a sad place and use it as a vessel for both rather than only aligning it with one or the other.”

What’s she gone through has had a positive side: Agoro has become a mental health advocate. She has been vocal about her own experiences, and she strives to provide others with resources and to help change the public perception around mental health.

“Abi doesn’t look left or right,” says her mother, Kimberly Agoro. “She keeps fighting for who she’s supposed to fight for. She fights for people to be treated with respect, dignity, and love.”

“I’m so excited for Ruthanne because I feel it’s something that is very dear to her, so all artwork that comes from a place of sincerity and passion has the ability to change the world,” Akomolafe says. “I’m really proud of her for trusting herself and her artistic vision.”

With only weeks to go until the release of her first line, Agoro admits to being more than a little nervous. She’s spent the past year hand-stitching and sewing each piece, and she’s continuing to work on pieces for the launch. The line has been challenging, yet one she’s especially excited about. She wants it to be more than just another fashion launch, and hopes it’s something deeper for everyone who browses its contents.