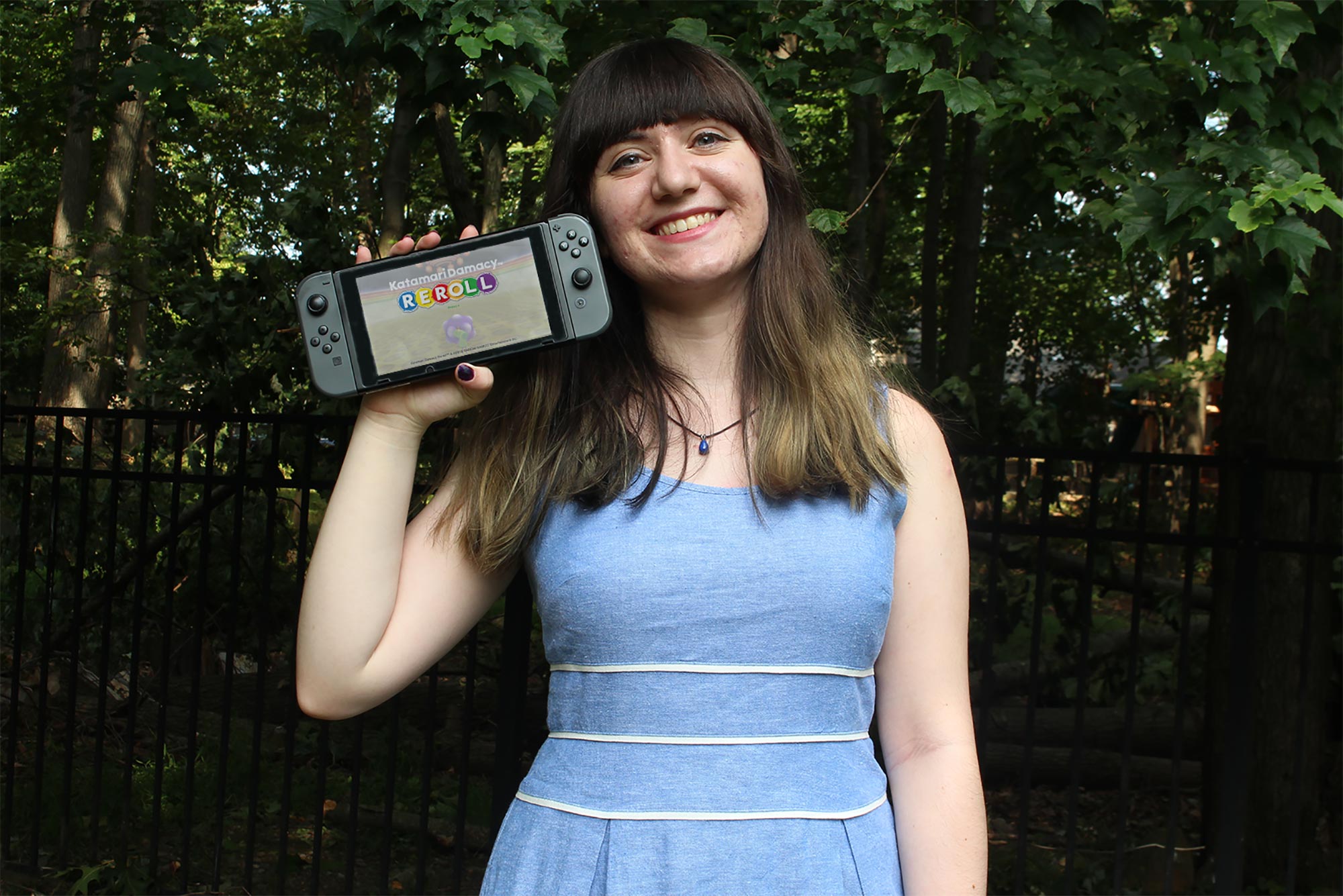 Sabrina Scotti (CFA’20) displays Katamari Damacy REROLL, one of the children’s video games she studied as part of her an Undergraduate Research Opportunity Program–funded study of whether games use diverse music styles to further music education. Photo courtesy of Sabrina Scotti

Do Children’s Media Serve Up a Properly Diverse Musical Diet?

Who says research is tedious? To prepare herself last spring for a study of children’s music, Sabrina Scotti boned up on episodes of the acclaimed Cartoon Network show Steven Universe. (It won a Peabody Award, while its sequel series, Steven Universe Future, is up for an Emmy in September.)

Scotti (CFA’20) wasn’t entering a second childhood—she was trying to learn whether the show mixed it up musically, offering a variety of styles for its young audience—a key ingredient in fostering music appreciation—for an Undergraduate Research Opportunities Program (UROP) project. UROP provides University funding for faculty-mentored research by undergrad students in the humanities, natural sciences, medicine, arts, and education.

When she approached Diana Dansereau, a CFA assistant professor of music and music education, about overseeing the work, Scotti also leveraged connections. “I have several friends from the video game music community who worked with the Steven Universe composers years ago on YouTube,” Scotti says. Both composers agreed to be interviewed for her research.

The video game connection is no coincidence. Her study, whose results she’s analyzing and writing up this fall, began while she was still a student, and it built on earlier UROP research she’d done with Dansereau that looked into the musical variety of popular children’s video games. “Children benefit from a rich and varied listening diet,” says Dansereau.

Music was an essential ingredient of Steven Universe, as each main character was associated with an instrument that often accompanied the character’s scenes. “We decided to look at songs that were at the forefront of the episodes and most notable,” Scotti says. “However, there are very detailed background songs throughout the whole show.”

Among the preliminary results from the study: “There has always been a wide variety of styles in Steven Universe,” she says, “which is interesting given the concept of each character being represented by an instrument, the main characters forming a core jazz ensemble.” While some musical elements of the show had larger ranges than others, “we believe that this cartoon pushes the bounds of the definitions of these elements—mode, meter, style, tempi, articulation, and dynamics.”

The years up to age eight are critical for music education and appreciation, Dansereau says. “Just as you would not expose a child to only primary colors or speak to a child using only monosyllabic words, it is important that their listening environment is rich and varied. From a development perspective, children’s brains are undergoing enormous growth and change during this early period of brain plasticity.…The premise of our work is that oversimplification of musical intake limits a child’s ability to understand and engage with a wide variety of music throughout life.”

Children benefit from a rich and varied listening diet.

Jazz, pop, rock, hip-hop, orchestral music, slow tempo, quick, moderate, changing: kids should experience the full diversity of music, Dansereau says, yet much of what they’re fed is the audio equivalent of junk food: formulaic, “quick in tempo, with rapid lyrics,” and with a repetitive meter of groups of two beats.

Scotti presented her UROP findings in January at MAGFest, a video gaming convention in Maryland, which filmed her presentation for its YouTube channel. She may seek a similar gaming conference to present her Steven Universe research.

Then again, she hardly needs a convention: her YouTube and Twitch channels have almost 10,000 followers who listen to her cover video game music on piano and sax and discuss music theory as it relates to games. She plans to post videos about her research on both platforms, which she continues to use while giving private music lessons and looking for a teaching job.

You wouldn’t want to teach children language the way some of the video games introduce children to music, Dansereau says: “There is so much communicated by a speaker beyond the ideas expressed through words. The pace of somebody’s speech, the volume of their words, whether they are enunciating or not, all communicate meaning. We want children to be able to perceive and extract as much meaning as possible from the music they hear. Ultimately, this will help them be more musical themselves and enjoy and understand music at a deeper level.”

Do Children’s Media Serve Up a Properly Diverse Musical Diet?

Do Children’s Media Serve Up a Properly Diverse Musical Diet?
0
share this