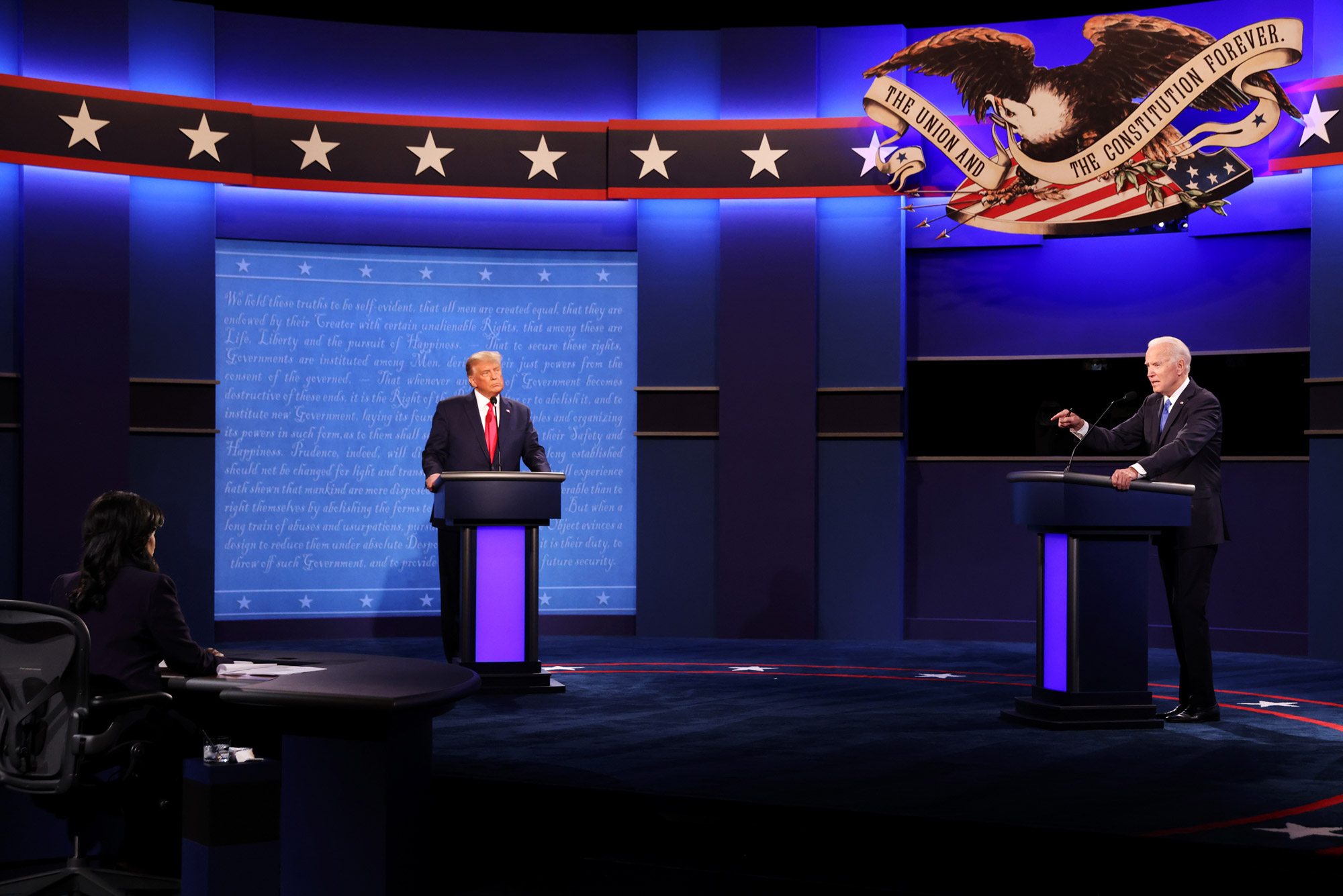 BU experts assess the final debate of the 2020 presidential campaign

With the November 3 election less than two weeks away, stakes were high for the event organized by the nonpartisan Commission on Presidential Debates and telecast live from Belmont University in Nashville, Tenn.

Each watched the debate and emailed their answers immediately afterward.

BU Today: What was your one clear takeaway from the debate?

Amazeen: The candidates have competing visions of reality: Trump based on fantabulous storytelling and Biden based more on seeming pragmatism and checkable facts. I imagine the fact-checkers are extremely busy right now.

Andrade: The president continued a strategy of bullying, deflection, and hyperbole. Vice President Biden had difficulty breaking through and seemed unable to effectively explain clearly what a Biden administration would look like.

Meade: Trump seemed finally to be attempting to return to his 2016 populist messaging, but it’s probably too little, too late. In 2016, he presented himself as someone who knew all the corruption because as a businessperson he was benefiting from it, and thus was the one to know how to fix it. He called back to this appeal when he said, “You are the one who takes all the money from Wall Street,” calling attention to Biden’s large base of Wall Street donors. Trump followed up by saying that he could call up Wall Street guys himself, but he wouldn’t want to be put in that position. Biden on the other hand, while forceful on certain progressive issues like the minimum wage and the need for a stimulus bill, continued to distance himself from the populist left of the party.

How did the decision to mute each candidate during his opponent’s initial two-minute answer affect the debate?

Amazeen: The muting contributed to a much more viewable debate. Trevor Noah predicted that Trump would get around the muting by shouting and even walking over to Biden’s mic, perhaps even licking the mic, too…thankfully, that didn’t transpire. Trump was fairly uninterruptive for the first two-thirds of the debate, but he started to lose his composure and interrupt more in the last third of the debate, talking over the moderator.

Andrade: It simply stopped President Trump from the interruptions that occurred in the previous debate. It also helped both candidates address specific questions focused on policy. Unfortunately, in response to each question truth-talking was hard to find.

Meade: The muting seemed to really help with the overall feel of the debate, and its effects appeared to carry into the rest of the debate. But the more substantive feel is also owing to the really excellent job that the moderator, Kristin Welker, did. Unlike Chris Wallace, she seemed able to maintain control and keep her cool even when candidates continued talking over time, and in contrast to the vice-presidential moderator (USA Today’s Susan Page), she asked a lot of follow-up questions.

The story of the first debate was Trump’s constant combative interruptions. Did the narrative change during this debate?

Amazeen: This debate was more about how each candidate explained the current state of the country. While Biden shared specific anecdotes and many statistics about the state of the world and his policy plans, Trump showed he continues to be a masterful propagandist. He spoke at turns in glittering generalities or bleak predictions that selectively used evidence to support his position. For instance, Trump repeatedly claimed that Biden said he would ban fracking. But Biden pushed back, clarifying that he said he would not allow fracking on federal land, but otherwise would not ban it. But as it turns out, Biden wasn’t entirely accurate on this claim, either.

Andrade: The previous interrupts were curbed due to the monitoring of the microphone. Trump’s interruptions ramped up later in the debate. Most of those interruptions allowed President Trump to stoke fear with words such as “illegal immigrants—a murderer comes in, a rapist comes in…those with the lowest IQ,” “socialized medicine,” “they’ll destroy your Medicaid.”

Meade: Yes, Trump was fairly effective in getting across his message this time. Perhaps some combination of the moderator’s seemingly even-handed approach and the muting contributed to a more controlled performance from him. At one point he actually said that he appreciated how the moderator was handling things, a moment I found quite surprising. I’ll be curious to see if from the perspective of Trump’s supporters, the moderation appeared more fair to them than at previous debates.

Was there a gaffe or blunder that could cost either candidate the White House?

Amazeen: It seemed as if Trump had Biden in a “gotcha” moment when Biden admitted he would transition away from the oil industry and stop subsidizing it. But Biden seemed to provide a justification for his position.

Andrade: President Trump consistently responded with falsehoods and exaggeration on the environment, healthcare, racism, the economy, and foreign affairs, unchecked. That may have turned some voters off and made Biden appear more attractive.

Meade: I don’t think so, though I was initially concerned about Joe Biden’s comments on school reopenings, framed around Boston Public Schools’ recent decision to move virtual. After noting that funding and PPE are needed to make schools safe, he said: “Not that many of you are going to die. Come on.” At the time, I didn’t realize this was an attempt to mock Trump’s earlier stated position on teachers not being easily infected, and, judging from reactions on Twitter, it seems I wasn’t the only one who missed the joke.

Did you gain any new insight or revelation about either candidate?

Amazeen: Voters have a choice between a fantabulous storyteller in Trump or an empathetic pragmatist in Biden. While great storytellers can be very compelling, the devil’s in those pesky details…or lack of them.

Meade: It’s not really a new insight, but I was struck once again by how difficult it is for Trump to not make issues into personal referendums on himself. It was particularly jarring in the race segment—where the opening question explicitly asked for candidates to speak to Black parents who worry about their children—to hear Trump making claims that he is “the most antiracist person in the room” or is the president that had done the most for Black people since Abe Lincoln, which Biden later turned into a pretty effective joke.

Did the candidates’ performance move the needle for either of them?

Amazeen: There are very few persuadable voters left. Biden embraced empathy—often talking directly to the people at home—and pragmatism; Trump continued to embrace conspiracy theories. I suspect both campaigns are happy with each candidate’s performance.

Andrade: The performance of both candidates was consistent with their strategy and messages maintained throughout the campaign. Trump continued to work to paint a rosy picture of his administration’s performance, including on his management of the COVID-19 pandemic. Biden focused on bringing the country together, bringing the pandemic under control, addressing climate change, expanding healthcare, and addressing systemic racism. Ultimately, neither candidate moved the needle. I don’t believe Trump gained any new votes. Biden looked more presidential and more compassionate. He lost no ground.

Meade: Possibly this could help Trump a little bit, simply because he did so much better than last time. But ultimately, I think it’s probably too late to see a big shift from this for his campaign, which is also running out of money right now. Biden performed similarly to how he usually does, and probably also better than last time, in part owing to the more effective debate setup and moderation, but I don’t think it changes anything for him either.

There are 21 comments on Trump, Biden Clash on Immigration, COVID … and Abe Lincoln