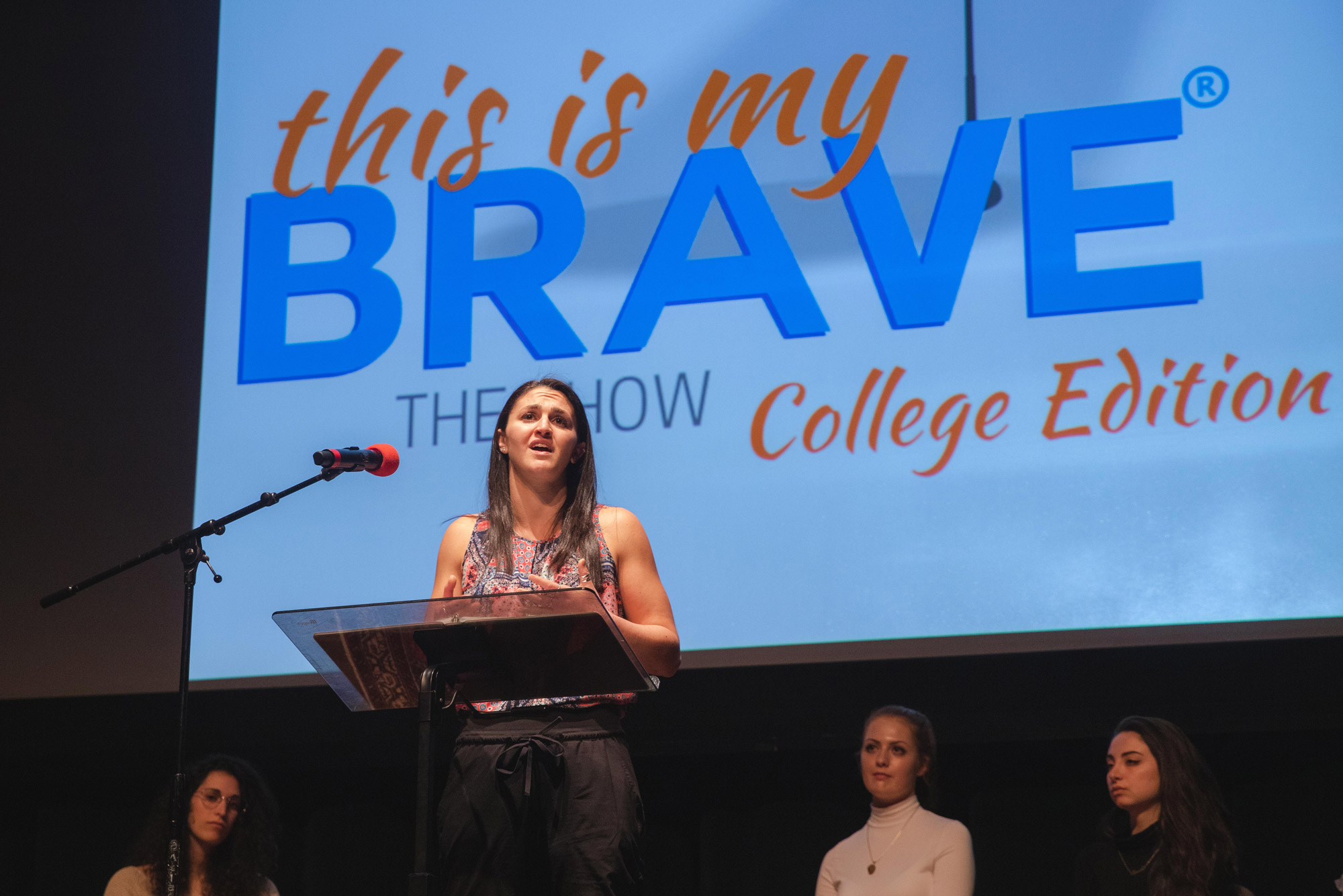 Ali Gold (Sargent’20) is a strong advocate for mental health. She is a residential counselor at Franciscan Children’s Hospital, and as a BU Undergraduate Research Opportunities Program student, works on a project related to mental health.

The college edition of the ensemble show This Is My Brave, hosted last week by BU

In 2017, Ali Gold got a frantic call from her best friend, who had overdosed on pills and was panicking. Gold quickly called 911, stayed on the line, and accompanied her friend to the hospital. Fortunately, her friend survived.

Gold (Sargent’20) knew the protocol, because she had been in a similar situation four years earlier: she had overdosed in a suicide attempt. But she called her psychiatrist, who reminded her that she mattered, then called 911 to save her life.

“I felt lost, ashamed, and overwhelmed,” Gold recalled before a crowd gathered in the Tsai Performance Center last week for a This Is My Brave College Edition storytelling event, which starred six students from BU, the Massachusetts Institute of Technology, Lesley, and Harvard, who shared their stories about living with mental illness and addiction.

“Fortunately, I worked with incredible, inspiring mental health counselors and phenomenal caring treatment teams,” Gold said. “I was fortunate  that I had people who didn’t give up on me, even at times when I wanted to give up on myself.”

According to a study by Active Minds, a nonprofit supporting mental health awareness and education for young adults, more than one third of college students are dealing with a serious mental health issue, yet only about a third of them receive the necessary treatment or support. This Is My Brave was cofounded in 2014 by executive director Jennifer Marshall, who received an outpouring of support in 2013 when she publicly disclosed her personal struggle with bipolar disorder. That inspired her to start the nonprofit This Is My Brave platform, with the goal of trying to erase the stigma that continues to surround mental illness and addiction.

“These students have crafted a story in a poignant and compelling way to reach other young adults,” says Courtney Joly-Lowdermilk, program director of Niteo, an intensive, one-semester program offered by BU’s Center for Psychiatric Rehabilitation aimed at helping college students who have had to leave school because of mental illness successfully return to academia; it also teaches them wellness tools and academic skills. “We know this about same-age peer support—it’s important to not feel alone in these experiences of struggling in your mental health,” Joly-Lowdermilk says. “If you hear these stories and they drum up something for you—if you’ve struggled to stay well, find a friend group, thrive—we hope you are inspired to seek out help. We hope this changes the culture and shows we aren’t afraid to talk about this.”

The This Is My Brave performance was sponsored by the Ruderman Family Foundation and hosted by BU’s Center for Psychiatric Rehabilitation, Behavioral Medicine, Wellness & Prevention, the Dean of Students, and Disability & Access Services.

During the event, Sarah Horowitz, who is taking classes through Metropolitan College, shared her experience living with post-traumatic stress disorder resulting from a boating accident when she was younger. Amani Carson, a premed post-baccalaureate student at Harvard, had the crowd laughing with her humorous, quirky story of dealing with extreme anxiety and the lengths she has gone to to achieve the perfect college experience.

Today, Gold is a strong advocate for mental health. She is a residential counselor at Franciscan Children’s Hospital in Brighton, the same psychiatric treatment center where she was once a patient. She is also working as an Undergraduate Research Opportunities Program student in the lab of Dan Fulford, a Sargent College of Health & Rehabilitation Sciences assistant professor of occupational therapy, whose research focuses on motivation, mobile technologies, and mental health. In addition, Gold works as a mental health counselor for her health sciences practicum course.

During the Tsai performance, Gold recounted one of her experiences  as a counselor. “I’m standing in the back stairwell, and a young girl is laying on the ground, crying,” she said. “She asked, ‘Why does it matter? I don’t want to live.’” Gold described laying next to the girl, breathing in and out together, and telling her that there were others with similar mental health struggles and that she mattered—that she could go on to do amazing things.

“I think one of the takeaways is that there are a bunch of resilient people on stage who have persevered,” Gold said. “I hope people feel inspired by our show to reach out and engage in conversations about mental health, just as they would with any conversation. This is the mission.”

This Is My Brave College Edition will next be performed on Thursday, March 5, at Brandeis University’s Carl J. Shapiro Theater (in the Shapiro Campus Center), 415 South St., Waltham. The event is free and open to the public. Find more information here.