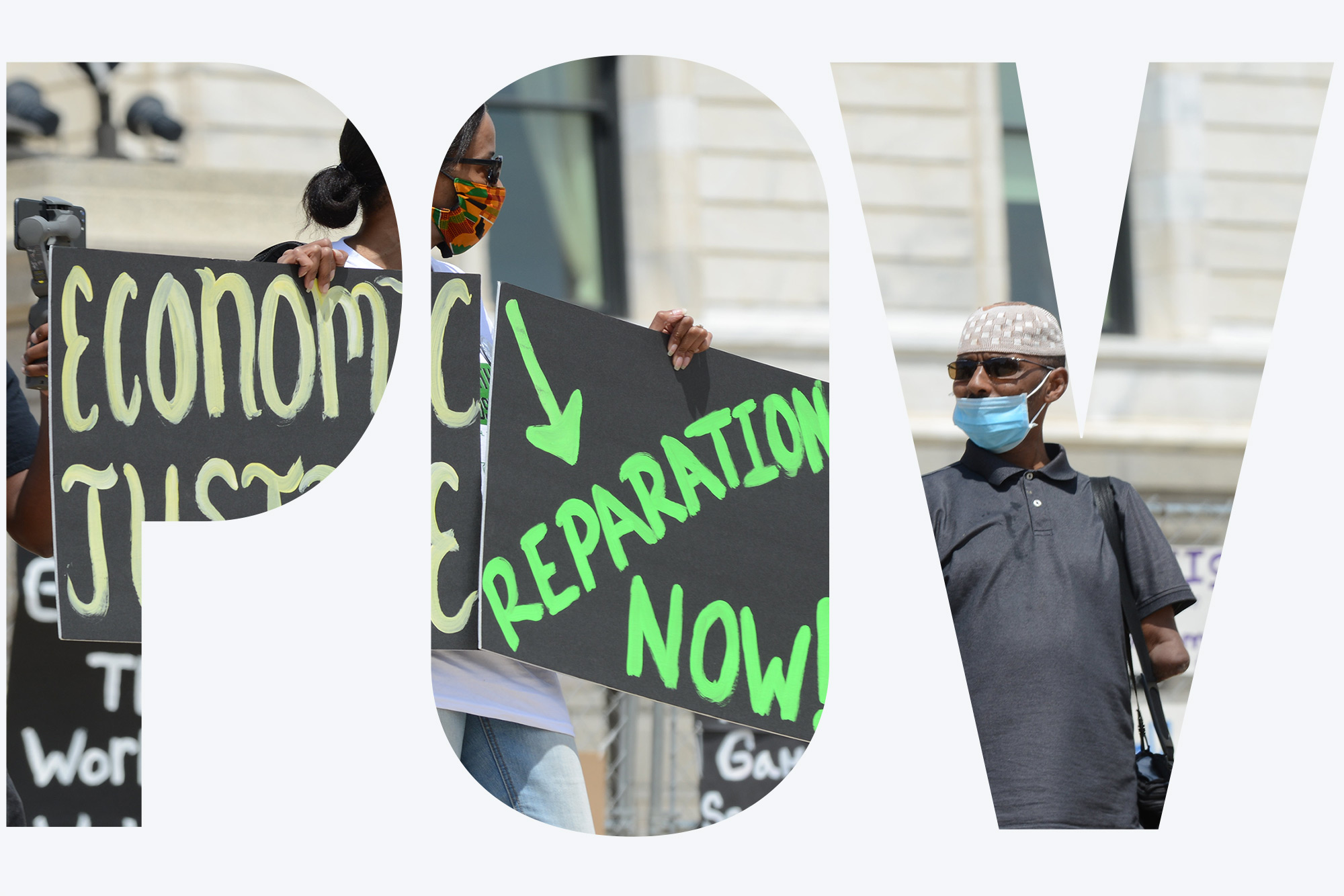 The country needs truth-telling and acceptance of our moral, legal, political, and sociocultural responsibilities

This is a transformative moment in history in the United States as well as in the rest of the world. Despite myths of a post-racial society as a result of many positive social transformations, we are today again forced to examine our inheritance of America’s great sin—slavery and its subsequent legacies of Jim Crow segregation, systemic racism, and dispossession of African Americans. The lens of iPhones, nightly reports by the media, the Black Lives Matter movement, protests against extrajudicial powers of the police, and the murder of Black people with impunity are exposing the fragile underbelly of this society, and what we see is the stark reality of structural racism and visceral inequality.

It is time for truth-telling and acceptance of our moral, legal, political, and sociocultural responsibilities—in essence, another opportunity to acknowledge and make right the deep wrong of chattel slavery and its destructive aftermath for Black people and our entire society. This is an unpopular subject, and Professor Kofi Anyidoho of the University of Ghana noted it best when he remarked that “slavery is like a wound in the belly over which scar tissue has grown. Such a wound is likely to destroy you if it is not opened up and cleaned of its infection.” For us in the United States, it lies hidden under the cover of historical amnesia. However, in a 2004 Commencement address at Wellesley College, Nobel Prize winner Toni Morrison reminded us about the deceptive dialectic posed by history, in that: “[T]he past is already in debt to the mismanaged present. And besides, contrary to what you may have heard or learned, the past is not done and it is not over, it’s still in process… The past is already changing as it is being reexamined, as it is being listened to for deeper resonances. Actually, it can be more liberating than any imagined future if you are willing to identify its evasions, its distortions, its lies, and are willing to unleash its secrets…”

Dr. Martin Luther King, Jr. (GRS’55, Hon.’59) used the metaphor of unaddressed reparations and restorative justice in his famous 1963 “I Have a Dream Speech,” when he declared: “In a sense we’ve come to our nation’s capital to cash a check…America has defaulted on this promissory note insofar as her citizens of color are concerned. Instead of honoring this sacred obligation, America has given the Negro people a bad check which has come back marked ‘insufficient funds.’” While Dr. King’s metaphor for reparations is articulated in monetary terms, true repair and restorative justice for the damage caused by slavery and its racist legacies can hardly be satisfied by only a check, though that has become the popular image of reparations promoted by its opponents. The financial transaction that assigned the stolen African captives from the slave ship in Baltimore harbor to new “owners” in Charlotte or that resold the chained black child from the slave coffle marching from Washington, D.C., to Mississippi transferred more than a mass of black flesh or legal property. That sale confiscated human beings’ rights to life, creativity, production, freedom of movement, and freedom of choice of a mate. It even conveyed to someone else the right to his/her “increase” into perpetuity. Thus, what we must talk about with reparations is what slavery really was—the theft of all rights to life and liberty of those who were enslaved and the subsequent dispossessions of their descendants of psychological, spiritual, and familial connections, and material gain.

This is a litany of civil and human rights violations and a tapestry of looting. In an interview with P. R. Lockhart in Vox in August 2019, historian Edward Baptist foregrounds this idea: “…[P]eople are bought, they’re sold, that’s the nature of slavery….But alongside the theft of physical labor, this marks a theft of reproductive labor from enslaved people, and it serves as the crucial engine of the expansion of US slavery.” Frederick Douglass made a profound confession of self-theft to his Portsmouth, N.H., audience in 1879 when he acknowledged: “I appear before you this evening as a thief and a robber. I stole this head, these limbs, this body from my master and ran off with them.” The trope of theft used here by Douglass captures cryptically the characteristic of that institution from which he escaped and aptly defines the subsequent effects of the legacies of loss from Jim Crow segregation, systemic racism, and inequality on African Americans.

While calls for reparations have a long and varied history (beginning with Belinda Royall/Sutton in 1783), Nora Wittmann, author of Slavery Reparations Time Is Now: Exposing Lies, Claiming Justice for Global Survival—An International Legal Assessment, reminds us that the call for reparations for African slavery and restorative justice today is global in its reach and includes “Massive…pollution of our environment, systemic racism, poverty…[police violence and mass incarceration which] have their causes in the current unjust world system…rooted in and…established through transatlantic slavery.” She goes on to say: “The formation of legal consciousness about the right to reparations…[is well] anchored in law, and not just demanded by justice and morality.”

As part of its agenda during this declared International Decade for People of African Descent, the United Nations commissioned a report which was submitted by its Working Group of Experts on People of African Descent. The group visited several countries, among them the United States, and concluded that the injustice and institutionalized racism they found demonstrates a real problem of Afrophobia and represents a “human rights crisis.” They observed that “racial inequality in the US remains a serious challenge as there has been no real commitment to reparations and to truth and reconciliation for people of African descent…and that contemporary police killings and the trauma it creates are reminiscent of the racial terror lynchings of the past. Impunity for state violence has resulted in the current human rights crisis and must be addressed as a matter of urgency.”

Reparations are indeed an idea whose time has come. Advocacy groups like the National African American Reparations Commission (NAARC), National Coalition of Blacks for Reparations in America (N’COBRA), Black Lives Matter Movement, and the Caribbean Community and Common Market (CARICOM) all speak of crimes committed, damages caused, and the structures and compensation needed for Black people to self-repair and advance collectively. The H.R.40 reparations bill of the late US Congressman John Conyers (D-Mich.) acknowledges that the issue of reparations is not just a reference to slavery. The bill, heard by the House Judiciary Subcommittee on June 19, 2019, just months before Conyers’ death, seeks to establish a Commission to Study and Develop Reparation Proposals for African-Americans. It declares that the government continued to perpetuate practices disadvantageous to African Americans after the Civil War, including “sharecropping, convict leasing, Jim Crow Segregation, redlining, unequal education, extra judicial lynchings, police violence, and disproportionate treatment at the hands of the criminal justice system.” As a result, the bill claims, African Americans “continue to suffer debilitating economic, educational, and health hardships.”

When we juxtapose some key images today, one is that of the late iconic Georgia Democratic Congressman John Lewis (Hon.’18) crossing the Edmund Pettus Bridge in Alabama and the other is an image of protestors of all races and ethnicities in the streets of the United States insisting that “Black lives matter” and that there be proper redress of police brutality and justice for the indiscriminate murders of African Americans like George Floyd, Breonna Taylor, Atatiana Jefferson, Aura Rosser, Stephon Clark, Philando Castille, Freddie Gray, Eric Garner, Tamir Rice, Michael Brown, and others. In the final analysis, respect for our moral, social, economic, and political health dictates that there be appropriate efforts of reparatory and transitional justice for the crime against humanity that American chattel slavery and African American dispossession represent. In addition, the marginalization of African American reality in this country invites us all to engage in an in-depth assessment of their experience for the implications it holds for us all—Black and white.

There are 9 comments on POV: It’s Time for Reparations and Transitional Justice for African Americans

POV: It’s Time for Reparations and Transitional Justice for African Americans
9
share this