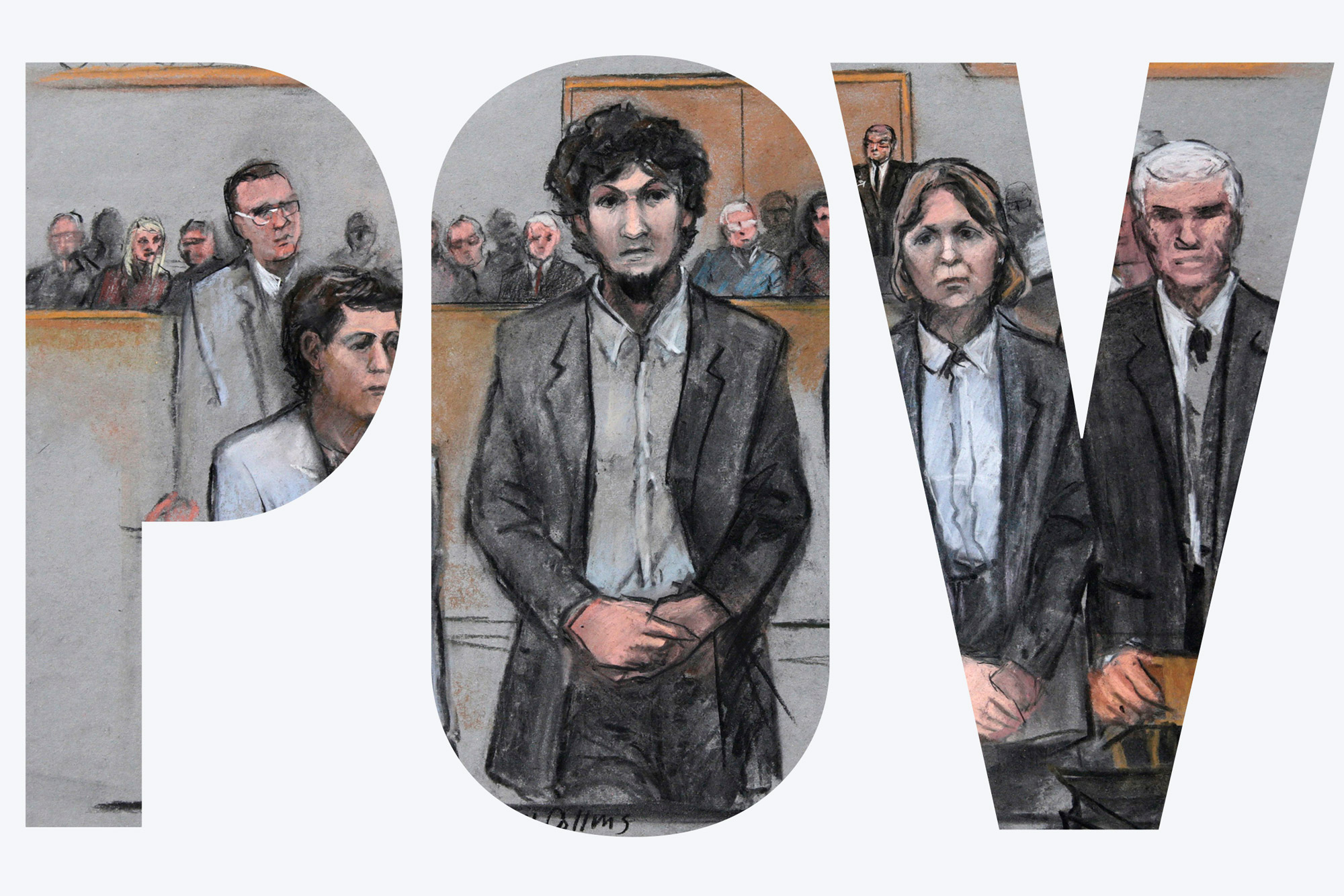 A courtroom sketch of Boston Marathon bomber Dzhokhar Tsarnaev (center) as a sentence of death by lethal injection is read at Boston’s Moakley Federal Courthouse in his trial’s penalty phase on May 15, 2015. The federal jury decided that Tsarnaev should be sentenced to death for his role in the deadly 2013 attack. Photo courtesy of Jane Flavell Collins/AP

POV: How to Ensure Only Impartial Jurors Decide between Life and Death

LAW prof: “Being asked to decide whether someone else lives or dies is almost certainly one of the gravest tasks that citizenship requires of us”

Who should we trust to make a decision about whether someone lives or dies? We have all been forced to confront this issue in these turbulent times. Police officers have used deadly force against members of the Black community in circumstances that have made us question who gets to wear a badge and carry a gun. Hospital officials making plans for what to do if they must ration scarce resources in caring for patients stricken with COVID-19 have led to public debates about the ethics of medical triage. And the recent court decision overturning the death sentence of Dzokhar Tsarnaev, the surviving Boston Marathon bomber, made us ponder this question once again.

On the last day in July, three judges of the federal court of appeals in Boston unanimously ruled that the trial of the most notorious terrorist case in Boston’s history was fatally flawed, in large part because of the way the jury was selected. Juries in capital cases are called on to do something for which they have no special training or expertise. But they are expected to be the conscience of the community and bring to bear their shared values in making a decision that literally is a matter of life and death.

Sentencing was the only thing at issue in the Tsarnaev case. The defense attorneys conceded that their client did what the government alleged in its 30-count indictment. Juries in the sentencing phase of federal cases seeking the death penalty are asked to do two things, one easier than the other. The easier task is to determine if the government has proved beyond a reasonable doubt that the defendant acted with any one of four objectives (for example, an intention actually to kill the victim or to inflict serious bodily injury that resulted in death) in committing a murder that had any one of 16 characteristics (such as killing in a depraved, heinous, or cruel way or killing a particularly vulnerable person).

Once the relatively easy part of the job is out of the way, the jury has to decide whether the evil in the defendant’s acts, called aggravating factors, outweighs what is good in the other parts of the defendant’s life, so-called mitigators. The aggravating factors must either be the ones the death penalty statute sets out or ones for which the government has provided notice to the defendant. The universe of mitigating factors is essentially wide open. Only if the jury unanimously believes that the aggravators outweigh the mitigators may it return a sentence of death.

One of the two reasons why the court overturned Tsarnaev’s death sentence was because the judge in the case improperly prevented the defense from presenting evidence about a mitigating factor—a brutal triple murder Tsarnaev’s older brother had committed some two years before he joined Tsarnaev in placing the bomb at the finish line of the Boston Marathon. This evidence, the court held, could have bolstered Tsarnaev’s claim that his brother played a more significant role in the planning and execution of the bombing plot and therefore made his younger brother fearful for what would happen to him if he refused to go along.

It was, however, the court’s second basis for its ruling that tells us more about how we should act as a society in choosing to execute one of the members of our community as punishment for the crime of murder. The court held that it was improper to refuse to probe more deeply than the trial judge allowed into the type of media coverage to which potential jury members had been exposed.

The 2013 Boston Marathon bombing was an earth-shattering event whose singular cruelty captivated not just New England, but the world. Two bombs exploded seconds apart near the marathon finish line on Boylston Street, killing three people, including Lu Lingzi (GRS’13), a graduate student at Boston University from China, and injuring more than 250 others. No one expected to be able to find 12 people to sit on the Tsarnaev jury who knew nothing about the case. But that isn’t the goal the law requires the trial to meet.

There is a lawyer’s cliché that expresses this concept: trials aren’t about the truth, they’re about the evidence. There is no objective truth about whether someone deserves to die as punishment. It is a value judgment. And finding people qualified to make that decision poses the question of what to do in a notorious case where everyone in the jury pool has been exposed to extensive media coverage. The judge required each potential juror to answer basically just one simple question about how this affected them: whether they could set aside any previous opinion they had and base their decision solely on the evidence.

But who would answer no to that question? And more importantly, what weight could we put on someone answering yes. Should we trust that everyone called to jury service in cases like this is so exquisitely self-aware that they know and can ignore their own preconceptions? The law is not so psychologically naïve. As the judges in the Tsarnaev case put it: “Decisions about prospective jurors’ impartiality are for the judge, not for the potential jurors themselves.”

Being asked to decide whether someone else lives or dies is almost certainly one of the gravest tasks that citizenship requires of us. As difficult it may be to decide how the balance should be struck between life and death, it is right that we do not also ask people to do the near impossible and determine if they are free from bias of which they may not even be aware.

There may be yet another group of citizens from the Greater Boston area who we will ask again to make this fateful decision. US Attorney General William Barr announced this week that the Justice Department will not only appeal the court’s ruling overturning Tsarnaev’s death sentence, but it will seek once more to convince a jury to return a verdict of death if the appeal is unsuccessful.

David Rossman is a School of Law professor of law and director of the Criminal Law Clinical Program; he can be reached at drossman@bu.edu.

POV: How to Ensure Only Impartial Jurors Decide between Life and Death

There are 2 comments on POV: How to Ensure Only Impartial Jurors Decide between Life and Death

POV: How to Ensure Only Impartial Jurors Decide between Life and Death
2
share this