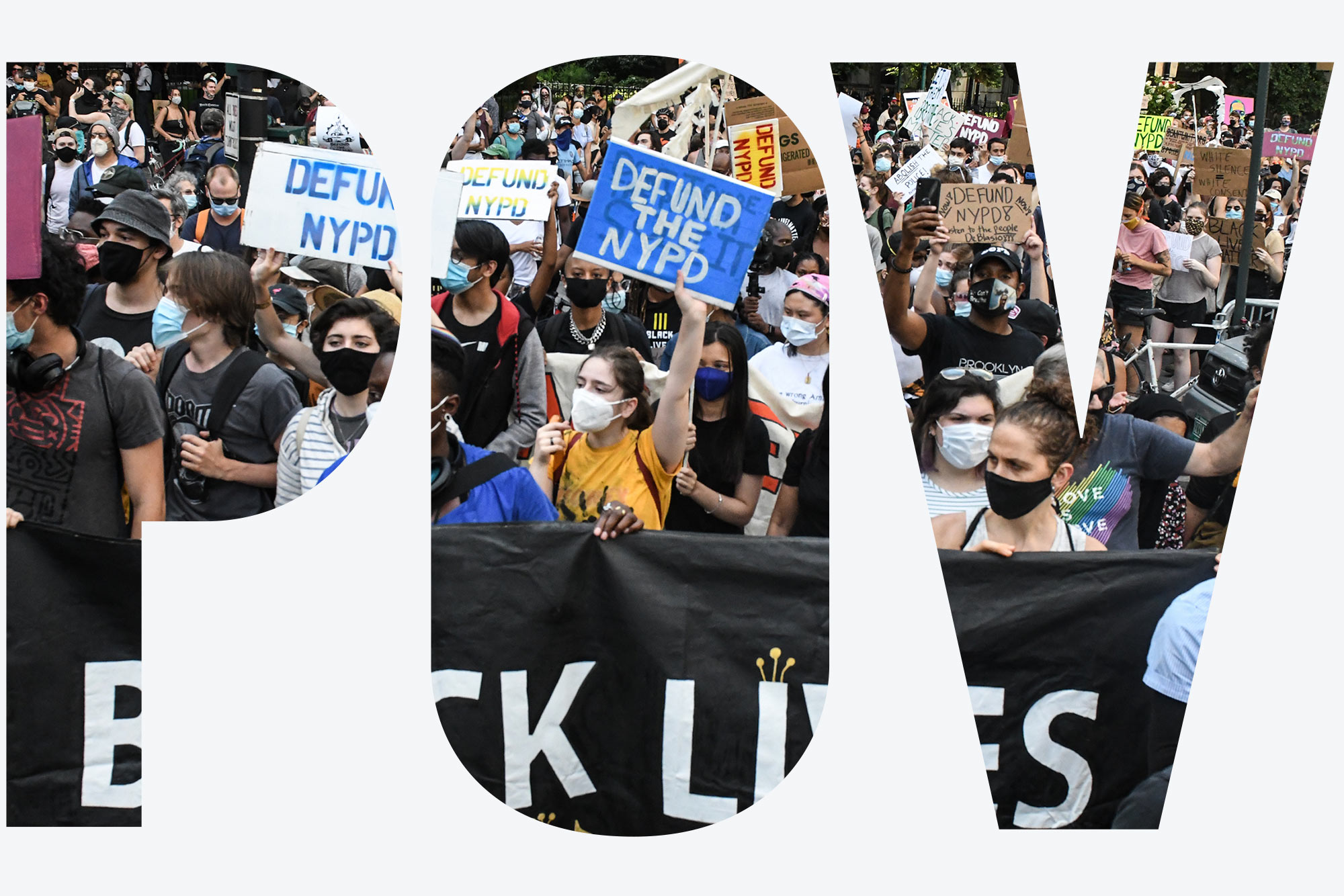 POV: The America I See Is Not the Same One My White Friends See

If we want to truly address police brutality and COVID-19 in the Black community, we must dismantle systemic racism

“Can you please step out of the car?”

Those words are one of the most frightening things to hear as a Black man living in the United States. I’m not sure how many times I have heard them, but my heart still skips a beat every time I do. I remember one instance vividly: I was coming back from Pennsylvania State University with my cousins. We had just finished making the four-hour trip from State College, Pa., to Brooklyn, N.Y.—Canarsie to be exact—when we decided to grab some Funfetti cake for my cousin Adetayo’s birthday. We picked up another member of our family and off to Key Foods we went. On the way back to Adetayo’s house, I made a turn at a green light. Suddenly, we saw flashing lights behind us as two undercover officers pulled us over.

I slowly rolled down the window after making sure that everyone’s hands were visible because that was not the day that I was going to die. I said to the officer in a calm manner, “Excuse me, can you explain why we got pulled over?” No answer. The officer then proceeded to ask for our IDs. Next, he asked: “Are there any weapons in the car.” “No,” I replied. “Can we check the car to make sure?” he asked. “Why?” I said to the officer. “We just went to the store to buy some Funfetti cake.” Again, no answer. We were then asked to come out of the car and so we did. Minutes later, after being patted down, the officer said, “All set.” We entered the car and then they drove away.

We knew why we were pulled over: four Black men in a BMW meant trouble to them. The reason I mention this story is because even though the Bloomberg era of stop-and-frisk is no longer in effect in New York City, racism and police brutality still exists and persists. During the first weekend of May, alarming videos were recorded of New York City Police Department (NYPD) officers assaulting members of the Black community while a few miles away, officers were seen giving face masks to people, in primarily white neighborhoods that were actively disobeying social distancing rules set in place by Mayor Bill de Blasio. Data released by the NYPD revealed that social distancing enforcement is racially motivated. It reveals that communities of color have been impacted to a far greater extent by police enforcement than white communities. Between March 16 and May 5, at least 120 arrests were made. Of these arrests, 68 percent of detainees were Black and 24 percent were Hispanic. Shortly after this data was released, a video surfaced of a woman being attacked by NYPD officers and de Blasio stated, “Absent a serious danger to the public, NYPD will not take enforcement actions for failing to wear face coverings.”

The constitution states that all men are created equal, but protests across the country, spurred by the killing of George Floyd, an unarmed Black man, by white police officers in Minneapolis over Memorial Day weekend, reveal the hypocrisy in those words. Another man had been the victim of racial profiling, just like me, but this time, he lost his life. The whole nation watched as he was denied the right to breathe for 8 minutes and 46 seconds. We all listened as he called out for his mother to come help him.

This tragedy and the recent killings of other unarmed Black men and women, including Ahmaud Arbery, Breonna Taylor, Tony McDade, and Elijah McClain, has sparked a national uprising against systemic racism and police brutality. Police use of force is the sixth leading cause of death for young Black men. Black men are three times more likely than white men to be killed by police. In 2019, Black people accounted for 24 percent of those killed by police in the US, despite comprising only 13 percent of the population. In killings by police from 2013–2019, only 1 percent have resulted in officers being charged with a crime. And even if officers do face trial, they hardly ever get convicted.

We are facing two major public health crises in this country today: COVID-19 and systemic racism. The latter accounts for why COVID-19 is killing Blacks at a higher rate than whites, and the reason why Black men are being killed by the police at a higher rate than white men. If we want to truly address police brutality and COVID-19 in the Black community, we must dismantle systemic racism. To do that, we need to educate ourselves on the barriers of oppression that exist in this country and how they are designed to put us down. We need to organize into a collective movement, because we are stronger together than apart. Finally, we need to act. That’s arguably the most important step. Advocate for change and speak out against the injustices you see in your family, workplace, and community, but make sure you are also helping to support antiracist legislation and policies.

The system of policing and public safety needs to change in this country and police officers should be in full support of this, if they truly want to “protect and serve” their communities. Police reform is not working and won’t be able to change the violent, aggressive, and racist nature of law enforcement that we see in this country. Changes to police department protocols like implicit bias training, mindfulness, and police community encounters have minimal effects and they are not worth the money that it costs to implement them. We need civilian oversight of police departments. And we need to defund the police in order to fund solutions to the health and social issues that are exacerbated—and often perpetuated—by racism, including housing, mental health, employment, education, and access to care, in order to better help address crime. What we don’t need are more cops and performative acts of solidarity. Renaming streets and creating murals are cool, but I’d rather have my justice and the freedom to drive without wondering if I will die when I get pulled over.

Mayowa Sanusi (SPH’19), is a research associate with Health Resources in Action, a nonprofit in Boston. He can be reached at mts5355@bu.edu.

POV: The America I See Is Not the Same One My White Friends See

There are 2 comments on POV: The America I See Is Not the Same One My White Friends See

POV: The America I See Is Not the Same One My White Friends See
2
share this