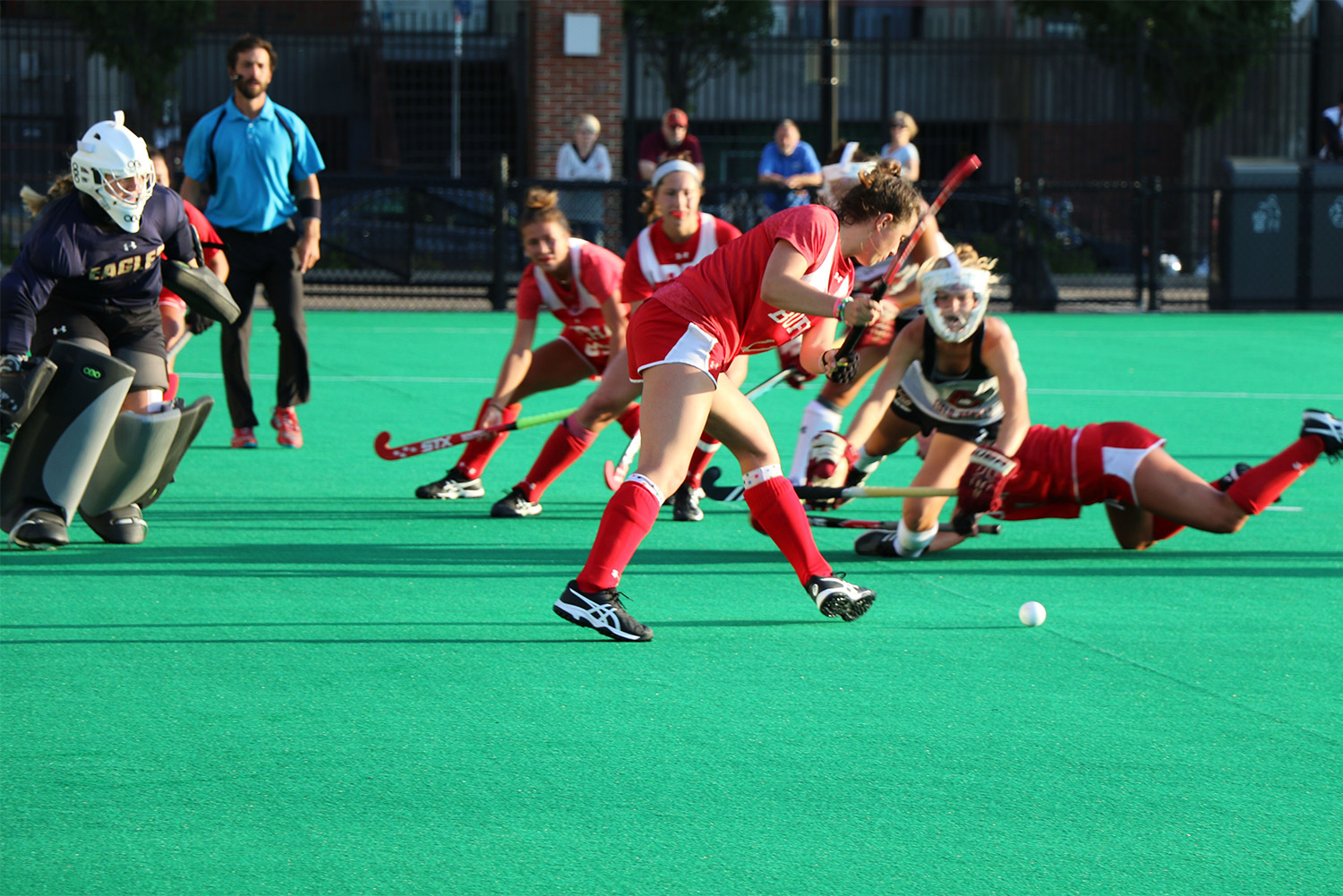 Biggest impact at BU will be felt by men’s and women’s soccer, field hockey, and cross country teams

After weeks of trying to maintain some semblance of a fall sports season by reducing travel and altering schedules to accommodate risks caused by the coronavirus pandemic, Patriot League officials announced on Monday all fall sports schedules have been canceled, but that teams will still be allowed to practice and train.

For Boston University, the decision by the league’s Council of Presidents was a painful blow for the more than 100 student-athletes and coaches across soccer, field hockey, and cross country teams. Decisions will be made later about winter sports, and about men’s and women’s rowing and men’s and women’s ice hockey, which don’t compete as members of the Patriot League.

“Our coaches and students are disappointed, but they are also very realistic,” says Drew Marrochello, director of Athletics. “They understood we tried, and gave the best effort to return. These are brilliant students and world-class athletes, and they will have the opportunity to return to the classroom and some aspects of team activities. It’s just that they fundamentally love to compete.”

In a letter sent to the University community Monday morning, BU President Robert A. Brown wrote that it was a “painful decision, one made with a full understanding of the aspirations and hopes of our student-athletes who thrive on the unique challenges of high level competition and the special bonds of team membership, bonds formed in practice and preparation and in moments of triumph and heartbreak.”

Marrochello says for weeks he had held out hope that all of the changes the 10 Patriot League schools were making to reduce travel, ensure that athletes were tested for COVID-19, and following health and safety measures during practices would be enough to carry on at least limited seasons. “We have always thought we were going to play,” Marrochello says. “Every decision we made, every model we followed, every ounce went into returning to competition. But in the end that was going to be difficult for a lot of different reasons.”

He says the decision to cancel was exacerbated by events of the last few weeks, when cases of COVID-19 began to rise sharply in parts of the country that had seen weeks of declining numbers. When the Ivy League announced last week that it was canceling its fall sports seasons, it accelerated conversations among other leagues and conferences that were already considering the same move. “The Ivy League decision didn’t guide us,” Marrochello says, “but I think you will see more conferences following down this road.”

There is one key difference between the Patriot and Ivy League decisions: The Ivy League said teams will not be able to participate in competition “prior to the end of the fall semester,” which would impact the beginning of winter sports seasons. The Patriot League has deferred the decision on winter sports competition until a later date.

“Once everything started happening in March, we knew this was a possibility, it’s a very serious situation,” says George Abunaw (COM’21), a defender on the men’s soccer team. “With the practicality of college athletics, and all the travel, it didn’t make sense.”

The team, he says, was especially excited for this season because of first-year coach Kevin Nylen. “We had just gotten a new coach, we were working very hard, we were really excited to come back and get things started,” Abunaw says. “Even though we haven’t been together physically, we’re meeting all the time, we talk with each other, we all want to be together. Even if we can’t compete against other schools, we know we have something we want to build on and work towards. We still want to compete among ourselves.”

As a senior, he says he has not decided what he will do, since he is losing his last season. Because he did not play as a freshman, he has eligibility options to possibly have a fifth year at BU. “It’s something I have to think about,” he says. “I’m just looking forward to going back on campus, even without intercollegiate play.”

“It’s a huge disappointment, there were tears and sadness,” Sally Starr, BU’s longtime field hockey coach, says of how her players took the news Monday. “It was almost like the storm on the horizon that you hoped would pass you by. But this wasn’t going to be passing us by.”

She says it was especially tough for her eight seniors, who anticipated a strong season with a “loaded squad.”

“I love working in August,” Starr says. “I miss being on the field with my athletes. Now I am just truly hopeful we’ll have a spring season.”

One of the complications the Patriot League faced was that no matter how aggressive one school was with its own testing program, allowing students, coaches, and staff from another school onto other campuses meant all of those people would probably have to be tested as visitors. “I think we can return to some sense of normalcy, and competition, but there are still some impractical aspects to playing a game and sharing information,” Marrochello says. “We can test our people, but we have to validate other people coming onto our campus.”

Brown, in his letter, said that organizing travel, either by plane or bus, and competition with necessary protocols for distancing and testing, is particularly challenging for team sports. Additionally, he wrote, each institution takes different approaches to testing, making consistent health protocols challenging. “We know our athletes are exceptionally fit and so as a group not in a high-risk category. But the possibility of transmission related to travel and competition is what makes the decision to suspend competition this fall a painful necessity.”

The decision raises questions around the eligibility of athletes whose seasons were canceled, and whether they might be allowed to play an extra season for their school to make up for the season lost to the coronavirus pandemic. “The Patriot League has its own process, regarding granting an extra year of competition,” Marrochello says. “This likely would qualify, but there are a lot of questions still.”

But the league also said the fifth-year waiver would not be automatically granted to student-athletes, and that requests would be subject to a review process.

“For a lot of reasons, people should be allowed to practice and train,” Marrochello says. “These are world-class athletes who aren’t going to remain dormant. There are also team-building aspects and cultural benefits that can’t go away. As long as we are adhering to all phases of reopening, and social distancing with protocols, I think practice is beneficial. These kids want to be together. That’s an important aspect.”

One especially tough aspect of the canceled season for Marrochello was his confidence that the celebratory end to BU’s winter sports season—with a men’s basketball Patriot League championship—was going to carry over to the spring, and even to the fall.

“I think we were going to win a number of championships,” Marrochello says. “We were looking forward to representing Boston University on the local and national stage, and at the same time, the decision is right and understandable.”