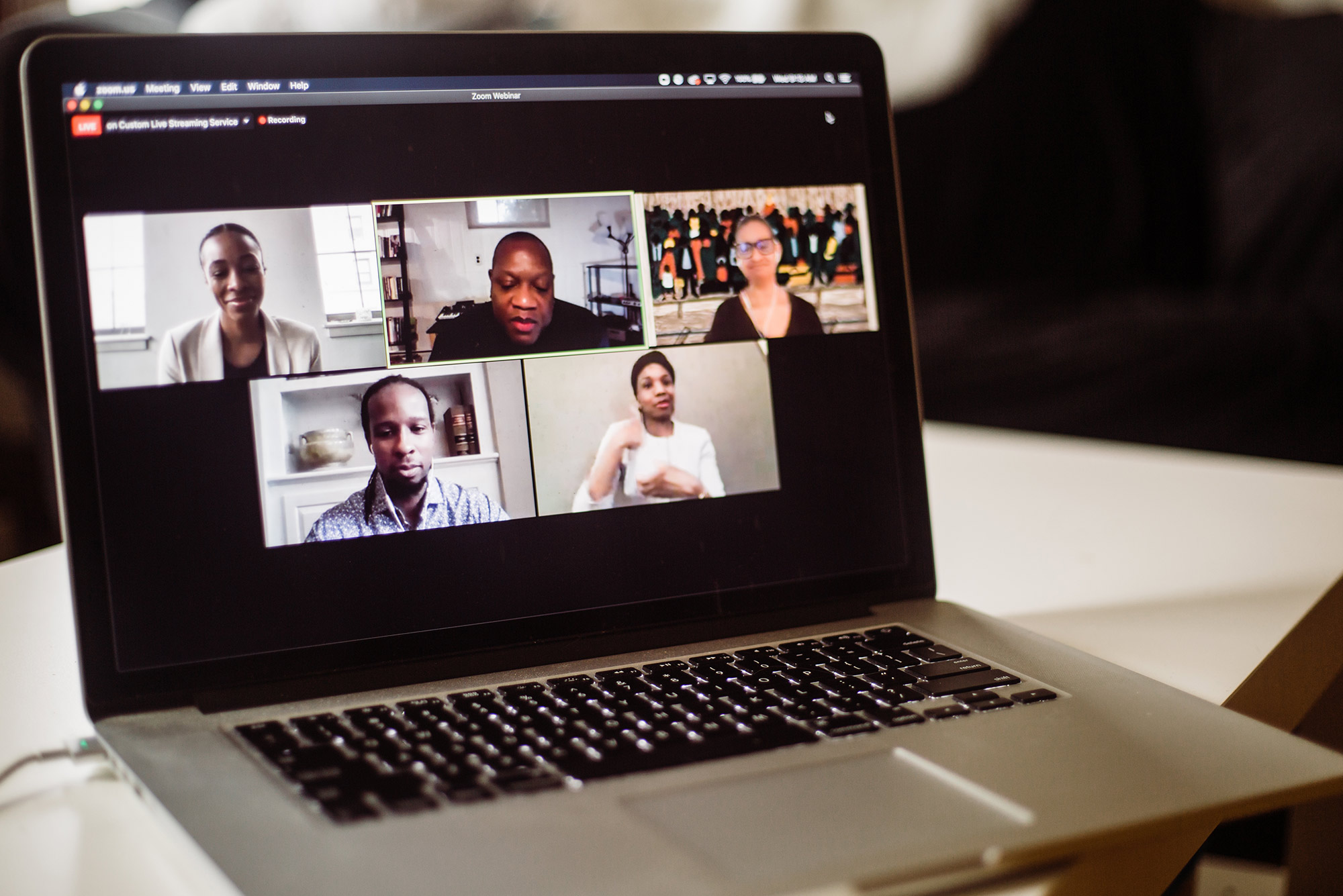 Ibram X. Kendi, director of the new BU Center for Antiracist Research, leads a panel of University scholars in A Conversation on the History of Racism in the opening plenary session of BU’s Day of Collective Engagement on June 24. Photo by Janice Checchio

Pain, Anger, and Hope as BU Comes Together to Talk Race and Racism

There were complaints that Boston University ignores the pain its Black students feel, and frustration that the faculty and staff are not more diverse. But there was also hope that real, systemic change on campus can be achieved through a sustained commitment from the entire University community.

Amid a charged national climate, almost 5,000 students, faculty, staff, and alumni turned out online Wednesday for the BU Day of Collective Engagement: Racism and Antiracism, Our Realities and Our Roles, a sprawling array of webinars held following weeks of national protests over recent, high-profile police killings of Black people across the country.

“Over time, it became clearer and clearer to me, and more poignant in my experiences in and out of the classroom, that there’s only 5.8 percent Black faculty on campus,” recent alum Ina Joseph (COM’20) said in a session called Black BU: An Intergenerational Conversation about Alumni Experiences with Racism & Antiracism on Campus. “And most importantly, what really drew my attention, especially as an RA and as someone who was engaging in a lot of leadership roles on campus, whenever conversations about race, diversity, equity, and inclusion came up, it was always students of color and particularly Black students who were leading those conversations.”

Wednesday’s event was an attempt to change that. Panelists suggested some simple first steps: Speak up when you see microaggression—your silence is part of the problem. Don’t be afraid to make mistakes. Interrogate the role of race and racism everywhere, not just in Black studies classes. Expand the canon of who and what is taught. Embrace humility and listen to marginalized people. Take their cues on what to do. And white people, do your own reading—don’t ask Black people to educate you on racism.

Participants repeated over and over that it was imperative that University leaders don’t feel satisfied with the day’s events—they must use it to launch bold ideas that lead to concrete, systemic change.

The University suspended all classes, meetings, and events, and BU President Robert A. Brown and Jean Morrison, provost and chief academic officer, joined Crystal Williams, associate provost for diversity and inclusion, and newly hired faculty member Ibram X. Kendi, along with dozens of other faculty, staff, and students for panel discussions and breakout sessions. The sessions ranged from Racial Violence & the Law: A Sordid History to Inclusive Pedagogy & Decolonizing the Curriculum. (Read how the day transpired in our live blog.)

In opening remarks, Brown said change will be difficult and it won’t always come quickly. But he stressed that change will come. “This is a time when it’s vitally important to listen and learn,” he said.

Williams recounted in her opening remarks one of the everyday realities of racism—the “small bit of apprehension” she always felt driving to the grocery store when she hit a rotary where there was a police station. Fearing, she said, that as a Black woman she had been lucky and that some day her luck would run out. Instead, this week the traffic circle was filled with more than 100 people, mostly white, holding signs that said, “Black Lives Matter,” “White Silence = White Violence,” and “No Justice No Peace.”

“I had to pull the car over because I was brought to tears,” she said. “This is an extraordinary moment” for confronting racism in America.

“I was very encouraged by everybody’s openness and willingness to share the things they’ve experienced and felt. I’m invigorated,” Morrison said as the day wound down. “Tomorrow we will debrief and begin the process of responding with action.”

The event hashtag, #BUTalksAntiracism, trended on Twitter throughout the day, and most people weighing in on social media felt that the event was a good first step for BU, but that the institution cannot just pat itself on the back and move on. Afternoon panelist Louis Chude-Sokei, a College of Arts & Sciences professor of English and director of BU’s African American Studies Program, tweeted: “Black people can’t be the only people living with this. We have to make it the case that everyone lives with this. We have to live with it, communally.”

During the opening panel, A Conversation on the History of Racism, Kendi, director of BU’s new Center for Antiracist Research, said, “We must understand our nation’s history of racism before we can change it.”

The most repeated phrase of the day was: “Get comfortable being uncomfortable.”

“I’m sure plenty of times a professor has looked out at their classroom and noticed that there are no students of color in the room,” Joseph said during the alumni panel. “Ask your white students why they think that is. Call them out the same way you would call out a Black student to speak on their experiences of racism or discrimination in their internships and in their fields of work. Ask your white students what their perspective on what is happening in this country is, because that’s how we get those conversations to happen. That’s how we also prevent students of color from having to constantly do the emotional labor of educating their peers, and thereby educating faculty in BU as an institution, as to how and where it can do better.”

In that same session, D. A. Whatley (Questrom’15) said he was surprised to hear some of his fellow panelists say they had largely positive experiences on campus, because, he said, “I’ve had quite a few incidents of dealing with racism at BU.”

In the Research On Tap session, Christine Leider, a Wheelock College of Education & Human Development clinical assistant professor, and Christina Dobbs, a Wheelock assistant professor of English education, presented their work on the experiences of women of color in academia, a project they began after experiencing feelings of isolation. “As brown women from small rural towns, we didn’t fully relate or share experiences with our colleagues, especially at a predominantly white institution,” said Leider.

The panel brought together leading BU scholars Saida Grundy, a CAS assistant professor of sociology and of African American studies, and Paula Austin, a CAS assistant professor of history and of African American studies, as well as Kendi and Chude-Sokei. They have been researching and teaching the centuries of history that led to the current moment, including the COVID-19 pandemic that is disproportionately affecting and killing Black people and the national protests over the police killings of George Floyd, Breonna Taylor, and Rayshard Brooks and the police mishandling of the murder of Ahmaud Arbery.

One of the great things that’s happening on the streets and all over the world is people are rediscovering their own power. That is an absolute fact

“One of the great things that’s happening on the streets and all over the world is people are rediscovering their own power. That is an absolute fact,” Chude-Sokei said. ”Who knows where it goes, but we can all agree that people are suddenly realizing that, oh, institutions are scared of us, and we can do something. That should inspire students to engage with their own needs and their own wants.”

While the current protests were front of mind for many, conversations also focused on effecting change in hiring, curriculum, and other areas within the academy. “I think it’s necessary to go out and have thousands of people march on Boston Common and let their voices be known,” said Pauline Jennett (STH’05, Wheelock’27), a School of Theology Dean’s Advisory Board member. “I think it’s also important to have people in the system, as Howard Thurman did, where he became the first black dean of a major university and worked within the system, and we can see his legacy is still present today.”

The work of building institutional diversity, equity, and inclusion “is relevant to everything—hiring, retention, promotion, education, everything that we can think about that exists in our world,” Williams told one audience. “And yet people, because they don’t fully understand the concept, limit and frame it in relation to race or gender or LGBTQ or whatever it is and therefore feel alienated from it. I think that’s our failure as practitioners. We don’t talk expansively enough about these issues.”

Systemic racism was a primary focus of the daylong sessions, as panelists acknowledged that the justice system and higher education have played a huge role in perpetuating injustice in our society. “We have to acknowledge the [law system] is built on a hierarchy of racism, injustice, and oppression. That has allowed some of the things we see today to go on for so long,” said panelist Sarah Sherman-Stokes, a BU School of Law lecturer and clinical instructor and associate director of LAW’s Immigrants’ Rights & Human Trafficking Program.

“It’s only in the 20th century and continuing into the 21st century that American law takes care, American policy takes care, to try to root out deliberate racial violence from the law,” said constitutional law and legal history expert Gerald Leonard, a LAW professor of law, during a panel titled Racial Violence and the Law: A Sordid History. “But what we know is that particularly in the criminal justice system, what we have is the perfection of state-implemented racial violence in race-neutral terms, but with much racially disparate effect.”

In another session, Inspiring Justice Leadership at BU: Teaching, Research & Practice, Jessica Hamilton (STH’21), a graduate intern at the Howard Thurman Center for Common Ground, talked about the importance of professors and administrators “decolonizing the curriculum,” and her fellow panelists passionately agreed.

“In my department, every person teaching American politics is white, including me,” noted Spencer Piston, a CAS assistant professor of political science. “It sends messages about who has the intellectual authority to talk about race in American politics and who does not.”

I’m sure plenty of times a professor has looked out at their classroom and noticed that there are no students of color in the room. Ask your white students why they think that is.

The morning panel A Conversation about White Allyship, Advocacy, & Leadership featured a panel of white BU staff and faculty addressing the complexities of being a white, privileged ally to the antiracist movement without overstepping boundaries. The discussion included panelists’ own missteps and regrets as well as ideas about how to combat structural racism.

“You must continuously, daily work on allyship,” said moderator Carrie Preston, Arvind & Chandan Nandlal Kilachand Professor, a CAS professor of English and of women’s, gender, and sexuality studies, and director of Kilachand Honors College. “You’ll make mistakes, apologize with humility, and then get back to work.”

Stan Sclaroff, dean of Arts and Sciences, recalled the time a colleague expressed concern that women and faculty of color were not being heard or their ideas were being co-opted in discussions, often by white men. By not addressing those concerns right away, he said, it eroded not only participation, but trust.

“I offered an apology and thanked the people who were coming forward,” Sclaroff said. “It’s a real jolt sometimes when you misstep as a person who comes from privilege and realize that racism is baked into every aspect of society.”

Pain, Anger, and Hope as BU Comes Together to Talk Race and Racism

There are 10 comments on Pain, Anger, and Hope as BU Comes Together to Talk Race and Racism

Pain, Anger, and Hope as BU Comes Together to Talk Race and Racism
10
share this