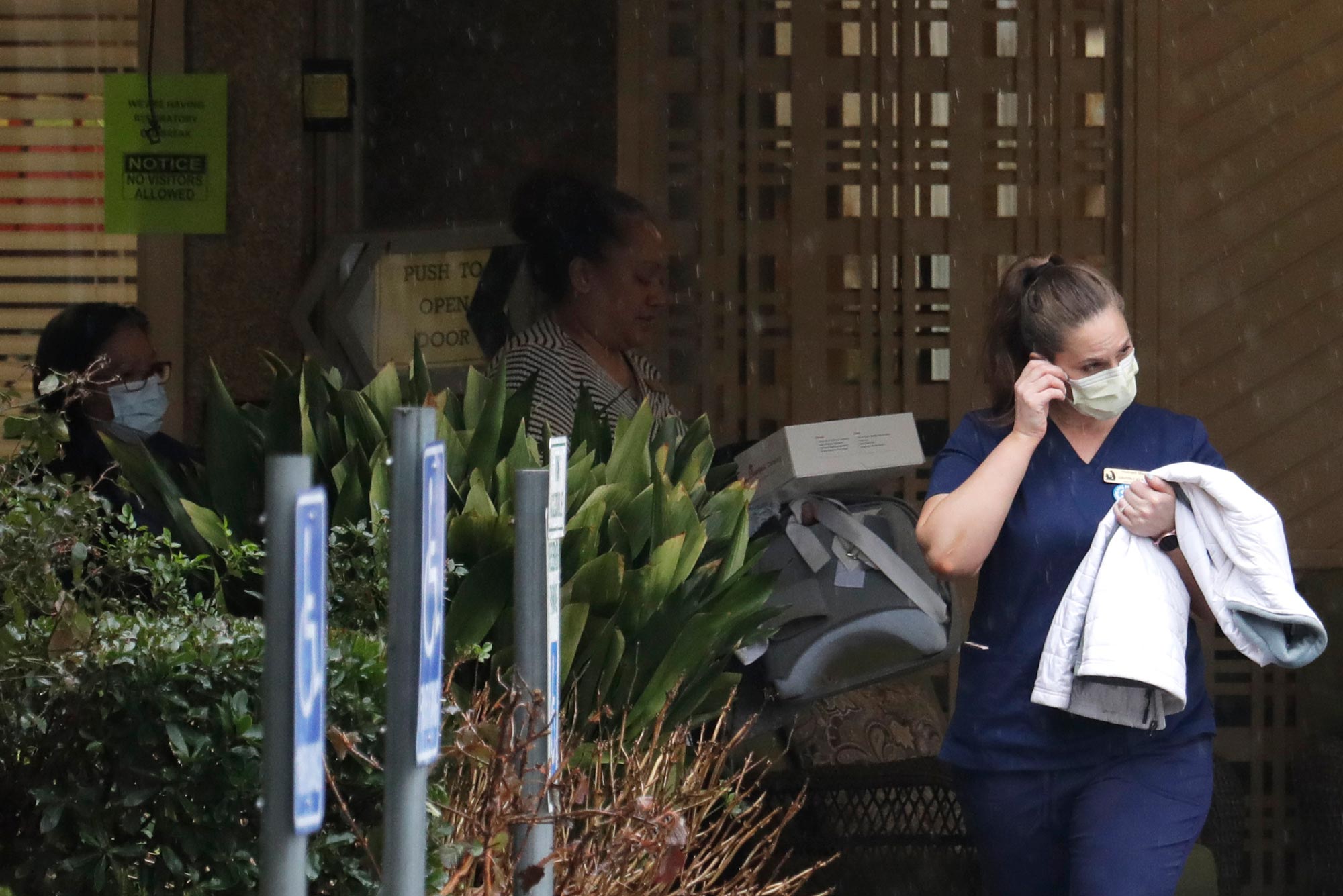 A healthcare worker near Seattle, where a cluster of coronavirus cases and deaths have been reported. AP Photo/Ted S. Warren

To bring the community up to speed, Boston University infectious disease experts Nahid Bhadelia and Ronald Corley of the National Emerging Infectious Diseases Laboratories have rounded up an extensive review of every bit of new information that’s emerged from the ongoing outbreak. They’ve based what they are calling a “COVID-19 primer” on data from the US Centers for Disease Control and Prevention (CDC), the World Health Organization (WHO), the Massachusetts Department of Public Health, and other official sources closely tracking the virus. Meanwhile, their scientific colleagues at NEIDL are gearing up to begin research on live samples of the novel coronavirus as soon as this week.

Since December 2019, more than 90,000 patients worldwide have been diagnosed with the novel coronavirus, known as SARS-CoV-2, which causes the infection that’s come to be known as COVID-19.  More than 3,000 people have died, including 10 people in the United States. While the majority of the confirmed cases have been in China, the respiratory illness is now present on every continent except Antarctica.

Currently across the United States, there are more than 125 confirmed cases and climbing. All of the US deaths have occurred in Washington state, where a nursing and rehabilitation facility in the Seattle suburb of Kirkland is at the center of several newly identified coronavirus cases. Genetic testing indicates that the novel coronavirus has likely been infecting the Seattle area for more than a month. Confirmed cases have also been identified in California, Oregon, Utah, Arizona, Texas, Wisconsin, Nebraska, Illinois, Georgia, Florida, North Carolina, New York, New Hampshire, Massachusetts, and Rhode Island. Despite the fact that health officials warn the virus will inevitably continue to spread, experts say the risk for the average person in the United States remains low.

In their report, Bhadelia and Corley advise how to most effectively take precautions and prepare for further spread of the illness. Here are seven key questions they provide in-depth answers to based on the latest coronavirus findings. Their COVID-19 primer can be read in its entirety here.

1.  How is the virus actually spreading?

In recent weeks, there have been reports of the virus spreading by community transmission—meaning people have become ill without known exposures to someone with COVID-19 or without a history of traveling to an outbreak epicenter like China, Italy, or Iran. Health officials have reported that since the disease is spreading in this way, we’ll likely see more cases and potentially a bigger epidemic in the United States. But for the most part, the virus is spreading from person to person through close contact. When respiratory droplets spread by coughs or sneezes of an infected person land in the mouth or nose, or are inhaled by a person in close proximity—within a six-foot radius—they could potentially become infected. To a lesser extent, the virus is capable of spreading by touching a surface that has the virus on it, and then touching one’s own mouth, nose, or eyes. There have been reports that this virus could be transmitted before a person manifests symptoms, but researchers are still uncertain.

2. Does everybody get the same symptoms?

There may be patients who are infected with this virus and do not show any symptoms, though very little is still known about this group. For the many who do display signs of being sick, symptoms of COVID-19 closely resemble the seasonal flu, though COVID-19 is thought to be more contagious than the flu and to have a higher mortality rate. A report by WHO referenced in the roundup breaks down the symptoms of 55,924 laboratory-confirmed cases in China, finding that 87.9 percent of patients reported fever, 67.7 percent reported a dry cough, 38.1 percent had fatigue, and 33.4 percent had shortness of breath.

Initial studies of the virus show that about 80 to 85 percent of people who are infected have mild illnesses with a cough and fever, while about 14 percent have a more severe disease. A more serious onset of the virus is more likely to occur in those over the age of 60 or who have other health risks present. Serious cases of the disease could lead to pneumonia and hospitalization and it’s possible that a smaller number, reportedly about 5 percent, may become critically ill. So far, the global death rate appears to be 3.4 percent, although experts say that figure will likely decrease once the extent of the coronavirus spread is better understood.

3. What do you do if you develop symptoms?

At the present time, symptoms are more likely due to influenza or other respiratory viruses than to SARS-CoV-2, according to Bhadelia and Corley. Because of the way this virus is transmitted, it is recommended that people displaying respiratory disease symptoms stay at home and limit contact with others as much as possible. It is always important to cover coughs and sneezes with a tissue and throw it away immediately and to wash hands often with soap and water for at least 20 seconds. Routinely cleaning of frequently touched surfaces and objects can also reduce the risk of spreading the infection.

If you think you possibly have contracted the virus, Bhadelia and Corley suggest staying at home except to receive medical care, and separating yourself from other people and animals whenever possible, as well as following other CDC guidelines.

If you’re not showing any signs of being sick, it is safe to leave the mask at home, experts say. According to the NEIDL experts, wearing a mask can often lead to “a false sense of security,” since it’s still possible to become infected while wearing a mask by touching your eyes and nose with contaminated hands. It can also lead to people abandoning other, more effective, protective measures, like keeping an appropriate distance from an infected person and frequent handwashing.

Instead of a mask, some other purchases to consider could be some extra dry foods, ready-to-eat meals, or soups, so that if you or someone in your household becomes sick, a trip to the grocery store won’t be necessary. Making sure you have tools on hand to sanitize, wash your hands, and decontaminate your living space is also recommended, as well as stocking up a small supply of cold and fever medication to save yourself a trip to the pharmacy.

5. How are potential cases being identified?

When patients show symptoms similar to COVID-19 and have a travel history to one of the areas where a large number of cases has been identified or have had exposure to someone with a confirmed case, those people are identified by medical providers as fitting the “case definition” for COVID-19, according to the researchers. At that point, samples of the upper and lower respiratory tract are collected from the patients and sent to one of the laboratories with the capacity to test for the illness.

6. Are there treatments being developed?

In short, there are none yet. Clinical trials will begin on at least one therapeutic, called remdesivir, from Gilead Sciences, and the National Institutes of Health is beginning a clinical trial of a vaccine from Moderna Therapeutics, a biotechnology company based in Cambridge, Mass. There are currently no treatments available to give to people after they have been exposed to the disease.

7. How is the city of Boston and Boston University preparing?

Here in Boston, the Boston Public Health Commission is responsible for responding to public health threats, including COVID-19, and it has released recommendations for healthcare providers and the general public. Boston University follows the guidance from the Boston Public Health Commission, the Massachusetts Department of Public Health, and the CDC, and is actively taking steps to monitor and plan for possible virus cases. The BU community can refer to the University’s newly released website dedicated to all things coronavirus to address concerns about campus safety, preparedness, impacts on study abroad programs, or if you have been personally affected by the outbreak.