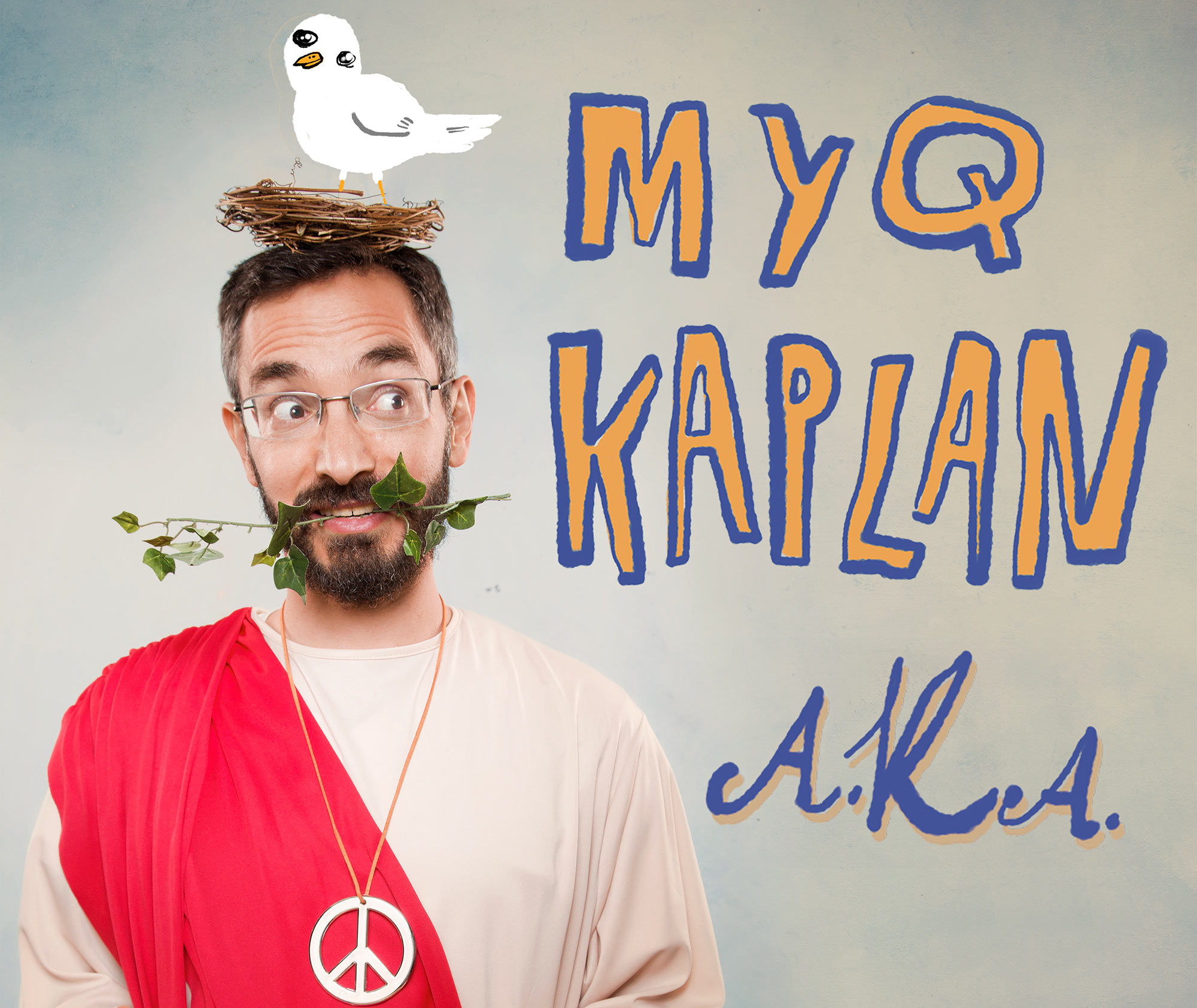 With A.K.A., stand-up star takes on veganism, love, religion, and more

Back in the days before the coronavirus pandemic, when people still went to restaurants, movie theaters, and other crowded venues, an all-too-common experience was getting interrupted while using a public restroom. Someone would inevitably knock on the door and ask if anyone was in there. The standard answer was, “Be out in a minute!” but comic Myq Kaplan thinks people could get a little more creative.

Try shouting out some trivia, Kaplan (GRS’09) suggests on one of the tracks of his new comedy album, A.K.A, before starting to sing his answers to the crowd, chanting like a priest during a service. “The longest sidewalk is in Tampa, Florida… It’s four and a half miles uninterrupted… This is a way a priest sings. Not sure why if God created everything in the universe, including every note in every octave in every scale, he still prefers every Sunday to be serenaded with songs that have only two notes.”

This rapid jump from joke to joke, and a knack for plumbing awkward social situations while serving up astute observations of society’s quirks, is the hallmark of Kaplan’s comedy, and it’s what’s made him so popular with audiences. A.K.A, released last month, draws on material from a solo show Kaplan performed at the Edinburgh Fringe Festival two years ago titled All Killing Aside (hence the album name). In its review of A.K.A., the New York Times notes that Kaplan’s fans should “marvel at the speed of his leaps of logic, the density of the puns, the pretzel-like callbacks. And while he may be for rarefied tastes, his sensibility couldn’t be more inclusive and sunny.”

Kaplan graduated from Boston University with a master’s in linguistics and got his start performing at Boston-area comedy clubs before appearing on NBC’s (now defunct) Last Comic Standing. He’s made the rounds on late night, including Conan, The Late Show with David Letterman, and Late Night with Seth Meyers, as well as hosting his own Comedy Central Presents half-hour. A.K.A. is his fifth album.

Bostonia caught up with Kaplan to ask about the new album, his time at BU, and what it’s like performing stand-up over Zoom during the pandemic.

Bostonia: Congrats on the album. I listened to it in the car when I was driving around aimlessly, trying to get my 18-month-old to nap. She stayed awake the whole time, so I think that’s a sign that it was entertaining.

Myq Kaplan: Thank you, glad you both enjoyed.

Bostonia: Tell us how the album came about and how your comedy has evolved.

Myq Kaplan: I started doing stand-up in 2002. In the beginning it was more asking jokes than telling. It’s saying to audiences, ‘Is this funny? Is this funny?’ And if they say yes, then it’s like, OK, I can tell other audiences these jokes. Early on, for my first few albums, which started coming out 10 years ago, the jokes tended to be about things I cared about, or things that were just funny, weird things about my life, politics, absurd wordplay.

But as I got more experience as a comedian, I realized I didn’t have to be beholden to every idea that came to me, that I could choose which ones I wanted to focus on and share. As I’ve gone on, the albums have become more structurally focused. The last album I put out was called No Kidding, and it was loosely themed around not wanting children. So some of the jokes sprang from that seed. A lot of the jokes weren’t about that, but they grew from it. This album, A.K.A, is the first hour of comedy I feel I’ve created that is about topics that I care about. I’ve always written jokes that I care about, but these are all jokes about things that I care about.

Bostonia: Can you talk more about that?

Myq Kaplan: There’s talk about some of my psychedelic experiences on the album. It was during one such experience that it occurred to me that there could be a main theme in this new album: love, compassion, and not murdering. Those things aren’t new ideas. They’re not new to me. They’re not new to the world. They are true and universally expressed throughout so many different cultures and faith traditions and societies and religions and such.

Myq Kaplan: For instance, I’ve been a vegan for about 18 years. And veganism kind of fits into one of the manifestations of not murdering. So there are jokes about that. On New Year’s Eve one year, I was at a party and waiting in line for the bathroom and just joking with people about the various things that could be said. And so sort of all the pieces started, you know, coming together, swirling about to be plucked from the ether of my mind and the world around.

Bostonia: How long did you work on the new album?

Myq Kaplan: From mid 2016 for the next two years—things started coming into place, the structure of it.

Bostonia: And there was a connection to the Edinburgh Fringe Festival?

Myq Kaplan: By the time I went to Edinburgh in 2018, I performed the set 25 nights in a row. Doing it night after night was something that helped me get it to the final shape it eventually has settled into. And then we recorded it in a studio in May of 2019.

Bostonia: Changing gears a little bit, why did you decide to get a master’s degree in linguistics? What were you planning to do with that?

Myq Kaplan: A fine question. There are two answers. One answer is I got an undergraduate degree at Brandeis, I majored in philosophy and psychology, and I got a minor in math and a minor in linguistics. But if I knew sooner, I probably would have majored in linguistics. This is an oversimplification, but part of it seemed like the math of English. That’s something I really liked. I didn’t know there was a word for it, that it was a field of study. But growing up, I liked diagramming sentences, like that was my favorite part of English class. I was good at math, and you should write [laughing]: “‘He was good at words,’ he said, demonstrating how good at words he was.”

The first linguistics class I took at Brandeis, I remember the teacher saying to us, “I don’t care if you split infinitives, or end sentences with prepositions, or spell things wrong, or say ain’t, because linguistics isn’t about prescribing how people should talk, it’s about describing how people do talk.” And that has always resonated with me. That’s like science and art. People discovering things about themselves and the world and maybe discussing how you want things to be, but also saying: here is how things have been, and here is where we are and where we’re headed.

One reason I went on to study linguistics in grad school is that I love it, and I knew there was more to learn because I had only taken a few classes. Second, I was getting to the end of college and didn’t know what job I wanted to have. My family, my neighborhood, my environment, my culture was like, go to high school, go to college, get a job, retire, die. You’re on your way! But I was in college and the next step was a job. My parents were teachers and I thought I could do that, but I also just started performing music. I loved doing that, that was my dream goal. I wanted to be a professional singer-songwriter, tour, record albums. One of the reasons I applied to grad school was I figured I’d keep being in school, give myself a few more years of being in school. My goal then was to be discovered. I’d go out, play my songs, and someone would say, “You’ve got what it takes, kid! Yeah! Now you’re an adult.”

Myq Kaplan: Fortunately, through performing in comedy clubs, I performed some of my songs that happened to be funny. Then I found other comedy clubs and open mics. Meanwhile, I was in grad school. One of the reasons that I chose to go to BU was, first, it was the only linguistics program that I applied to. And second, it was the only school that accepted me as a resident assistant so that I could live on campus for free. So that allowed me to work on my aspirational music career, which then became my aspirational, and then actual, career, comedy. I was making my living doing comedy the last year I was in grad school at BU.

Bostonia: Does your linguistics degree come in handy when you’re writing and performing?

Myq Kaplan: Some people ask, did you take linguistics classes to improve your comedy? Or did it go the other way in some manner? And the way that I’ve put it is that whatever it was inside that made me love diagramming sentences as a child, there are these correlates between the different levels of linguistics studies from phonetics and phonology, morphology, syntax, semantics. There are different kinds of jokes, whether they’re playing with words, playing with ideas. There are these connections. The reason I was interested in linguistics and the reason I’ve created some of the kinds of comedy that I have is because they interact with each other and they connect to something deeper within me. Those are the symptoms and I am the disease.

Bostonia: You’ve been performing comedy in quarantine via Zoom. What’s that experience been like for you?

Myq Kaplan: In some ways I do what I’ve done on any normal day—waking up, meditating, reading, answering emails. Performing on a streaming comedy show isn’t exactly the same as a live stand-up show with an audience in the room. Sometimes there’s no audience audible at all and you have to take on faith that people are listening, responding, enjoying. Sometimes some audience members are mic’d, and then it’s a combination comedy show and phone call.

I’m grateful for many things. I’m grateful I have a home, that I have a girlfriend that I live with and love, I’m grateful for the people in my life. With this album coming out I’ve been busy with interviews, podcasts, livestreaming shows. This is the longest I’ve gone without doing a live show, without regularly leaving my neighborhood, so it’s strange, and because it’s varied and a nationwide, global, communal experience, it’s what it has to be.