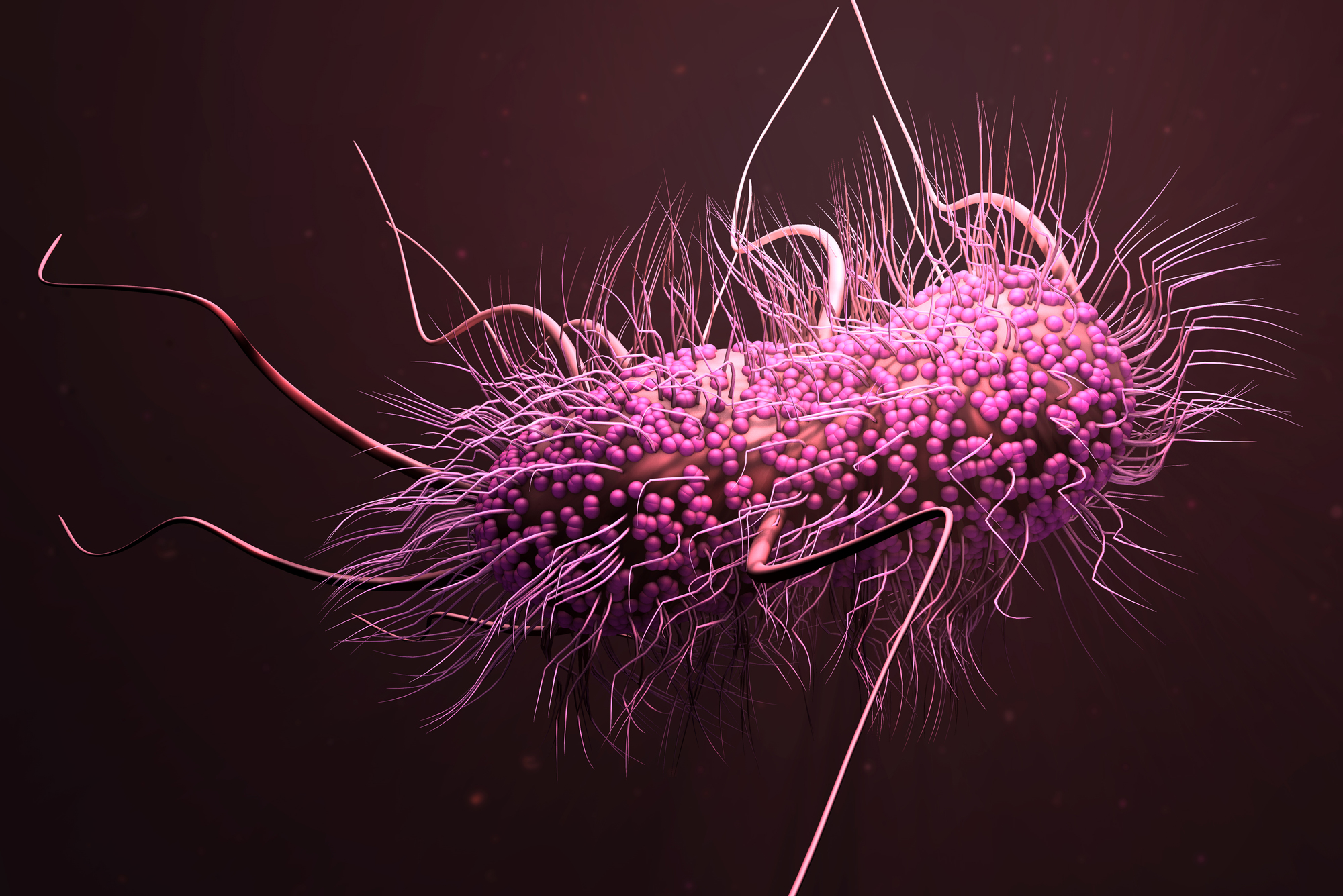 Could proteins taken from bacteria, like E. coli depicted here, be a new platform for biometric devices that continuously monitor body functions? Boston University biomedical engineers have developed a proof of concept that suggests the idea is within reach. Design Cells/iStock photos

Imagine a Fitbit that measures much more than steps, heart rate, and calories burned. It continually tracks all of the indicators of physiological health that currently require expensive and time-consuming analyses of blood plasma. The device is inexpensive, reliable, and powered by the same proteins that our bodies produce all day, every day. Although it sounds like a far-fetched concept by today’s standards, James Galagan, a Boston University biomedical engineer, says research conducted in his lab could speed that device along from the drawing board to our daily lives.

A team of researchers from Galagan’s BU lab and the University of Bordeaux was inspired by the one commercially successful biometric device that monitors a physiological function around the clock: the continuous glucose monitor, whose central task is performed by a protein obtained from a microbe that senses glucose.

“There are potentially millions of similar proteins,” says team leader Galagan, a BU College of Engineering associate professor of biomedical engineering. “They can sense just about anything that affects our health. A primary reason we don’t have more sensors like the glucose sensor is that the proteins needed to make those sensors haven’t been identified.”

So, Galagan’s team, which includes BU College of Engineering faculty members Mark Grinstaff, Allison Dennis, and Catherine Klapperich, set out to find a few. Their findings, described in a paper published in Nature Communications, used a novel screening approach to identify the first known bacteria-derived sensor for detecting progesterone, a female hormone that plays a critical role in reproduction. The team then developed technology that translated the sensor’s detection capabilities into an optical output, creating the first real-time, optical—and reversible—progesterone sensor.

The sensor’s reversibility, says Galagan, allows it to generate continuous measurements as the hormone’s level rises and falls in the body, similar to the glucose sensor. It also sets the sensor apart from existing antibody-based methods for measuring progesterone, which provide only a measurement from a single point in time.

In a test using artificial urine, the researchers found that the sensor, which can be equipped with an inexpensive and portable electronic reader for point-of-care applications, could detect progesterone with a specificity sufficient for clinical use. All of which suggests that it could be suitable for home use, replacing many laboratory-based tests for progesterone measurements that are required during the process of in vitro fertilization.

The study’s big takeaway, says Galagan, is that it’s a “first proof of principle that we could take an organism, identify a new sensing protein, isolate this protein from the bacterium, and engineer it into a sensor device that is applicable to point-of-care use. As far as we know, this has never been done before.” He emphasizes that the newly developed approach does not use the bacteria as a sensor. Rather, it mines the bacteria for protein parts, isolates those parts, and then turns them into sensors that can be used for device engineering.

“Up to now, wearable technologies have focused primarily on macro [indicators] of health, such as heart rate, blood pressure, etc.,” says Kenneth Lutchen, dean of BU’s College of Engineering. “But we desperately need methods to predict disease emergence well before they create dangerous changes in such measures. Dr. Galagan and colleagues have shown proof of principle to provide real-time monitoring of microbial indicators of health status in a way that may radically transform our capacity to engage in predictive, at-home telemedicine. In principle, they can provide specific and sensitive early insight into disease emergence leading to early intervention, so that quality of life is improved while dramatically reducing healthcare cost.”

The paper, whose technology was recently showcased at the kickoff symposium of the new BU Precision Diagnostics Center, provides a foundation for developing many more sensor devices, based on the same class of proteins. The researchers are currently building on that foundation—developing technology to immobilize and deploy such sensors, and working on ways to convert its detection capabilities into a direct electronic signal.

“Co-opting biology for technological purposes typically requires translating biological signals into a flow of photons or electrons,” says Galagan. “We are working on that now.”

“The great thing about this is the interdisciplinary nature of the research,” says Klapperich, director of BU’s Precision Diagnostics Center. “We have people doing computational work, molecular work, and people from materials science who are building the sensors. To work with so many people from different parts of the University is exciting.”

Since their breakthrough was reported in Nature Communications, the researchers have already developed a second-generation approach that allows them to screen for parts from complex microbial samples, rather than from a single cultured bacterium. That “meta-genomic” screening can search such things as soil, or our own microbiome, essentially granting access to the full diversity of microbes for researchers looking for sensing parts. And because the approach identifies a specific gene as well as a sensing protein, it enables researchers to modify the transcription factor in ways that could make it more powerful or gain the ability to sense other chemical compounds, such as cortisol or estrogen.

“Right now, we are working with hormones,” says Klapperich. “But this can work with all kinds of things. I can’t wait until we get this ramped up.”

The grand challenge ahead, Galagan says, is the deployment of such sensors to monitor our health and environment. His team hopes to use technology being built in labs around the world to develop a wide range of applications: from sensing coral health to monitoring physiological variables from sweat and interstitial fluid with a noninvasive or minimally invasive wearable device.

“This is really just the tip of the iceberg,” says Galagan. “We are now positioned to mine the full diversity of microbes to engineer sensors for a wide array of health, biotechnological, and consumer applications. We hope that one day these sensors will be available on the shelves next to the continuous glucose monitor.”

This research was supported by the Defense Advanced Research Projects Agency, the National Institutes of Health, a Clare Boothe Luce Graduate Fellowship, and a Marie-Curie Fellowship from the European Union.