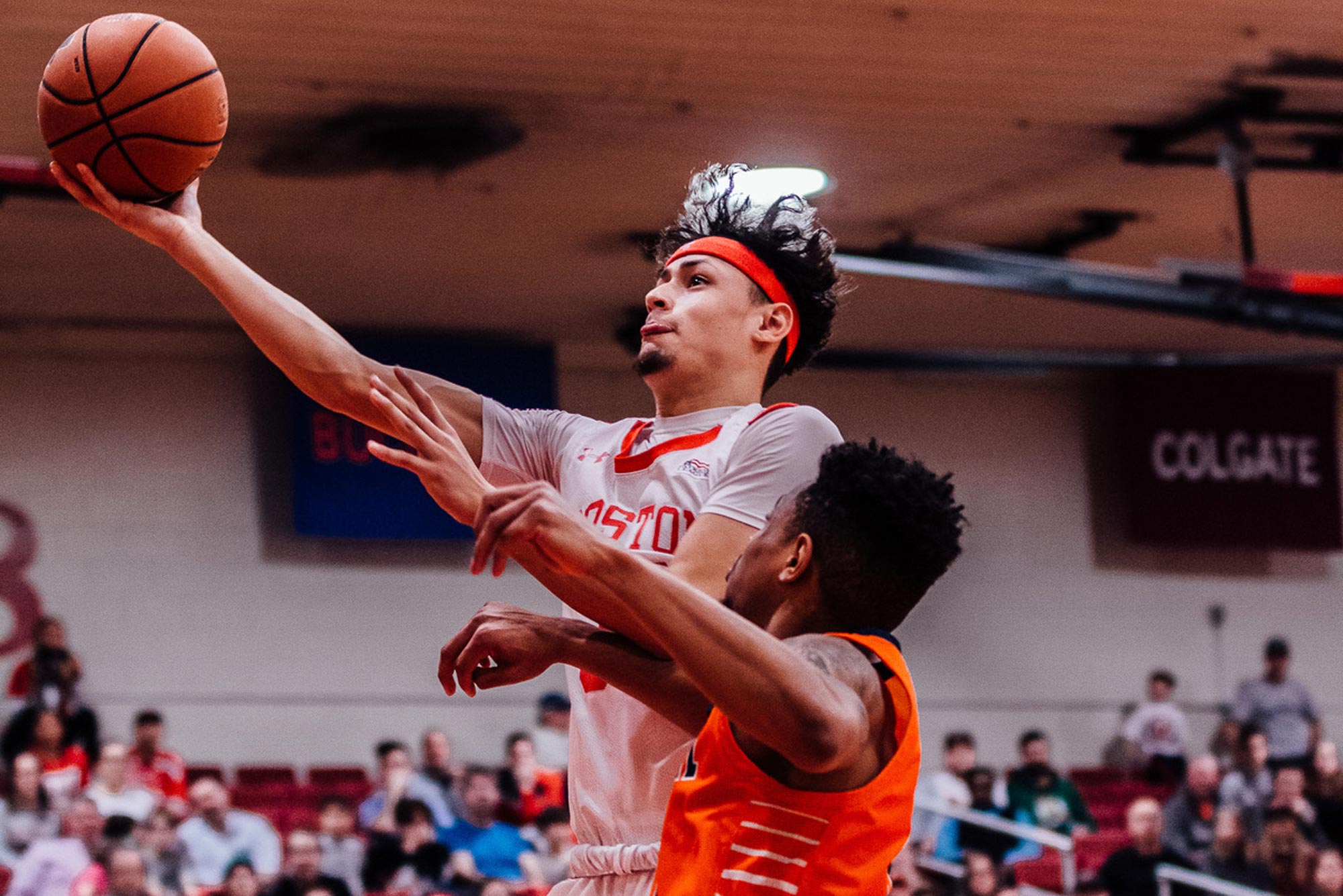 Javante McCoy (Questrom’21) is finding his stride in league play. He tied a season-high with eight assists against Bucknell in the Patriot League semifinal.

As a freshman, basketball Terrier Max Mahoney was a wide-eyed role player looking for his niche. Now, as a senior, the 6-foot-8 forward out of Basking Ridge, N.J., is looking to lead the Terriers to the program’s first Patriot League title, and first NCAA Tournament appearance, since 2011 on Wednesday night at Colgate.

A Patriot League All-Conference First Team pick this season, Mahoney (Questrom’20) is averaging a team-high 15.4 points per game to go with career-high marks in rebounds per game (8.2) and assists per game (2.5). After leading BU with 17 points in Sunday’s 64-61 Patriot League semifinal victory over Bucknell, Mahoney commented on the trajectory of his BU career.

“I remember the game against Lehigh that we lost at home in the semifinals freshman year,” he says. “It was terrible. We hadn’t made it back since. Coming in this year, I was really excited with the pieces we had. I was excited to be captain again. I was excited to lead the team. It’s shown the growth of both myself as a player and this program as a whole.”

“If you could be a coach and you could have an opportunity to coach someone like Max Mahoney, it’s like a gift from the man upstairs,” Jones says. “You’re not finding another person that’s going to be like this guy, and I mean that in every way.”

Whyte is averaging 13 points and 7.4 rebounds per game after missing all of last season because of injury. McCoy is at 12.2 points and 3.4 assists per game. All three players have been finding their stride late in the season. In the semifinals, Mahoney and Whyte recorded double-doubles, while McCoy tied a season-high with eight assists.

“Everybody can step up and make plays,” Whyte says, “but we’ve got players that have got to make big-time plays at certain times.”

Whyte and Jones both say Mahoney is playing—and leading—at an unprecedented rate.

“He’s coming out in beast mode,” Whyte says. “He comes in 1,000 percent. He’s going right when the game starts. He turns everybody up to a whole other level.”

“He’s been unbelievable,” Jones adds. “To have someone that selfless? Come on. It doesn’t happen.”

The coach says Mahoney showed talent from the get-go, but emerged as a star after a 30-point game at UMass Lowell his sophomore season. Over the years, he says, his senior star greatly improved his playmaking and defensive prowess. Mahoney was named to the Patriot League All-Defensive Team this season.

“Every year he got better, better and better,” Jones says. “I’m not going to lie—there’s no way I thought that he was going to have this type of year. I thought he could score the way he’s scoring it, but now with the level of leadership, toughness, and on top of that, I think he’s arguably the best player in the league.”

The Terriers came back from deficits at halftime in three of their last four wins before leading during most of the Bucknell game. Playing at Colgate, they hope to start strong again in the Patriot League final Wednesday and put together a complete performance from wire to wire against the defending league champs.

He’s coming out in beast mode. He comes in 1,000 percent. He’s going right when the game starts. He turns everybody up to a whole other level.

BU last won a conference title in 2011 as a member of the America East Conference. The Terriers made it to the 2014 Patriot League title game, but lost to American.

“We lost some close ones earlier this year, overtime games, stuff at the buzzer,” Mahoney says. “I think those types of games really prepared us and matured us so we’re able to close teams out better.”