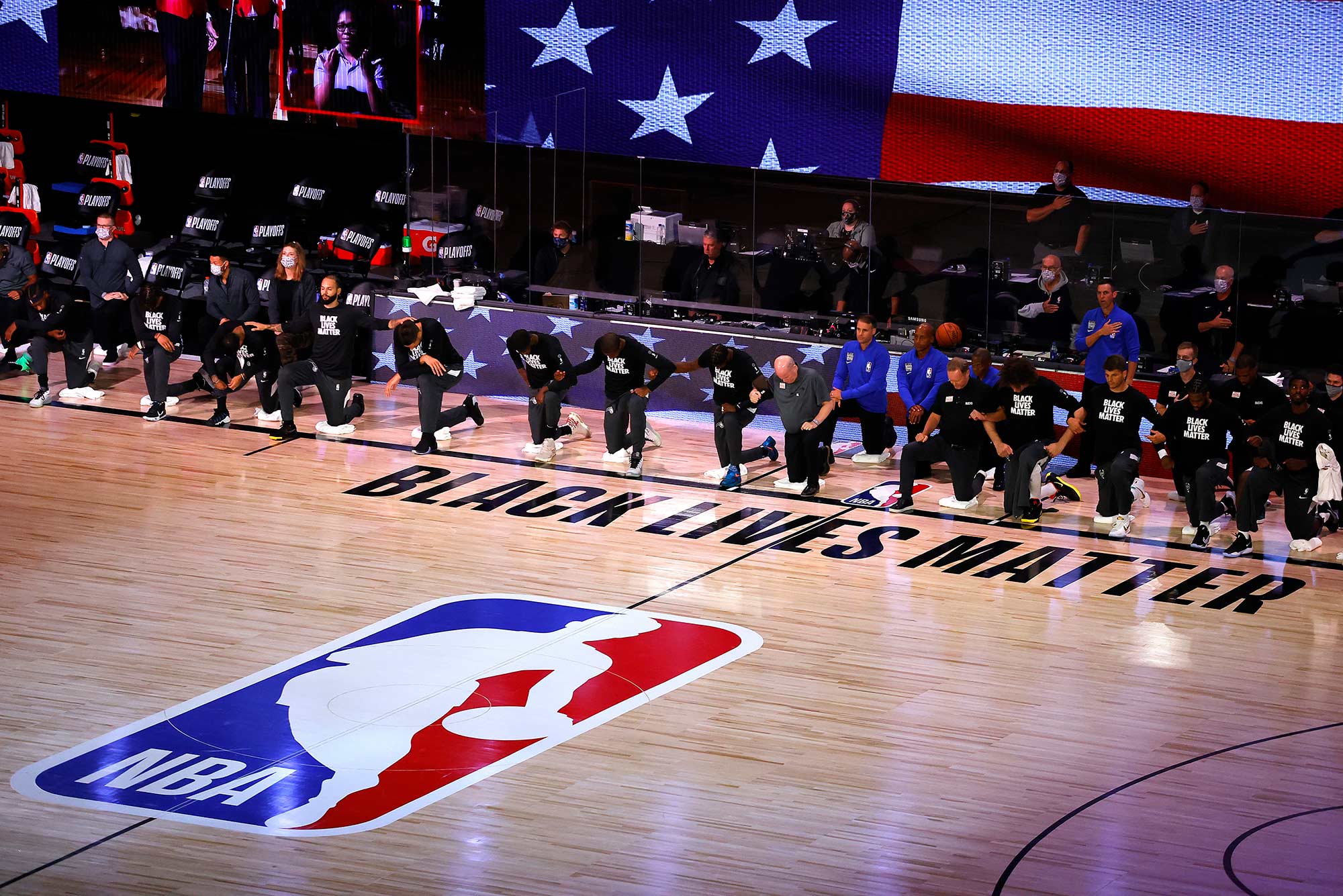 Before the start of a recent playoff game, the NBA’s Orlando Magic and Milwaukee Bucks players took a knee during the national anthem in protest of recent shootings of Black citizens. Photo by Mike Ehrmann/AP

“The narrative in sports has been if you stand up for social injustice, then you may suffer the consequences”

The worlds of sports, politics, and race all collided on August 23. The police shooting of Jacob Blake in Wisconsin sparked protests, violent clashes, angry words between President Trump and Democratic presidential nominee Joe Biden, and prompted the NBA, WNBA, NHL, and MLB to all cancel games in protest of police killings of Black people.

Joe Jones, Boston University’s men’s basketball coach, has been an outspoken voice during these times, telling the Boston Globe recently, “I’ve literally cried every day” and “We’ve got to find a way to be better.”

BU Today spoke with Jones about the killings and subsequent protests, the conversations he’s having with his players, and his hopes for the future. These are excerpts from that conversation.

BU Today: Can you talk about the conversations you and your players have been having this summer and what’s come out of them?

Jones: It’s been very hard. We’re talking about very important things like social justice, dealing with the effects of COVID-19, and what we have to deal with to get on the court. As a team, our meetings have been informative, emotional, and educational. Our current goals are to improve as a team, understand the importance of our protocol as it pertains to COVID, and lastly, we have been discussing the social injustice issues that plague our nation.

What was your reaction to the protests around the country from the professional athletes?

The narrative in sports has been if you stand up for social injustice, then you may suffer the consequences.

We have had athletes use their platform in the past, like John Carlos and Tommy Smith in the 1968 Olympics. Muhammed Ali, Bill Russell [Hon.’02], and Kareem Abdul Jabbar are just a few athletes who spoke up regarding social injustice.

Although we have had athletes step forward and speak on these issues, we haven’t been able to get to a place in America where Black people have been able to find equality.

So what gives you optimism that this time, these actions, will be different?

What would you say to a fan who says they don’t want sports and politics to mix, they just want to watch the games without all the politics?

I don’t want people to be shot who look like me. I am sorry that sports fans are being inconvenienced today because you can’t watch your sport. But these people have been inconvenienced for 400 years. They haven’t had the same advantages that you’ve had. So I’m sorry.

It is evident that we have attempted to keep sports, race, and politics all separate. But it is completely clear that is wrong. Race, sports, and politics are all intertwined. We are seeing this play out right before our eyes.

When Laura Ingraham was telling Lebron James to shut up and dribble, exactly what was she saying? Think about the depth of that statement. Lebron James, an African American man, a father, an athlete, and a citizen of the United States. Shouldn’t he have an opinion about who is leading our country and how he feels about what it is like being a Black man in the United States, freedom of speech?

There may be people that will say, I’m not gonna listen to an African American athlete who is making millions of dollars, but they are missing the whole point. That is why you should listen. He or she is putting their career on the line. He or she will be judged by the masses. If someone is willing to do that, there has to be a strong purpose.

On that point, do you think athletes, especially Black athletes, have some obligation to speak out in times like this?

We need athletes in the major sports in our country to speak out. Because of the level of admiration these athletes achieve, what they say has power. Sports are beloved in our society and to have someone like Lebron James, who is adored by so many, speak out about Breonna Taylor or George Floyd is going to garner attention. To have white coaches and athletes join their Black teammates in this fight is a powerful statement.

Many of these athletes come from very challenging communities and completely understand that sports allowed them to improve their lives. They also fully understand that they are one of the fortunate ones who were able to make it out. What about friends and family members who are left behind to deal with enduring systemic racism, police brutality, and living in impoverished neighborhoods? Who is listening to those people? Our athletes have to step up and speak for these folks, as well as themselves.

Who else will people listen to? Because what we’ve done in the past hasn’t worked. So, athletes have to use their platform now.

Do your players pay attention when the professional athletes speak out?

Our athletes are feeling it’s a good thing that these professional athletes have stepped up and spoken. They are feeling like, “Is this going to really happen?” They are scared to think this is going to pass and there won’t be much change. They are educated to understand that systemic racism is so embedded in our country that protesting one game isn’t going to be enough. We have to get at the root of the issues, through politics, through voting, through the structures that are holding people back. Until we get to that, this will be a moment and not a movement.

They are excited, but they are also apprehensive. They are motivated and also scared. They understand they get treated a certain way because they play basketball. They are fully aware of how other people in their neighborhood have not had opportunities they had because of basketball.

What about you? Do you feel an obligation to speak out as well?

I am an African American Division 1 basketball coach. I will be viewed differently in our country than others that look like me. I have a responsibility to be a part of this fight. If I am not going to stand and fight for people, then who is going to fight for us?

For me, it’s very emotional. I truly felt I could do something with my platform. Working toward creating change. I don’t have the answers, but I have to give my effort, so kids of the next generation can have a better life.

And what about the masses who don’t play sports? Where do they go, what do they do? Basketball helped break down doors for me, but what are some other avenues to get where we want to go?

Can you talk about the videos we’ve all seen and what it’s like for you to watch them?

Watching the videos [of the shootings] is pure heartbreak. It’s one of the worst feelings you can feel, that people don’t care. You’re angry, you’re hurt, and you’re scared. You’re disgusted and you feel completely humiliated because you truly feel there are too many people who don’t care.

You self-assess after seeing what we have all seen. What am I doing? How could I get involved? I have to do more.

Have you talked to your own children about this?

My son and daughter are teenagers and I have to talk to them about these issues. My son, in particular. My wife and I have had to have the conversation about being safe. Honestly I am concerned for him every night he is out with friends.

For my daughter, I don’t really think we have even come close as a society to truly understanding and addressing the impact that racism has had on women of color.

How do you feel BU is handling this moment?

I am proud of the steps that President [Robert A.] Brown and our University have taken towards fighting this battle. The renovation of the Howard Thurman Center for Common Ground. The appointment of Dr. Ibram X. Kendi, who is heading our Center for Antiracist Research. The appointment of Crystal Williams as vice president and associate provost for community and inclusion, and the appointment of Andrea Taylor [COM’68] as our first senior diversity officer. These are the types of hires we need to create change in our community and in our country, and this is just a start.

Within our athletic department, Drew Marrochello, our Athletics director, has been very supportive of many initiatives that provide our students of color an avenue to help spark change.

Marisa Moseley [CAS’04], our women’s basketball coach, has been a leader, not only within our department but also within the Patriot League. One of her accomplishments has been organizing the Anti-Racism Commission that has consequently led to each school within our league forming a commission on each campus.

You sound hopeful. Is that fair to say?

I am hopeful, but I believe as a country we need to be educated on the plight of African Americans going back 400 years, starting with slavery to fully grasp why we are here today.

What I hope is different this time is that there are more people engaged and more white people joining the movement and educating themselves on the issues. We have to have the difficult conversations in an attempt to educate people on the facts of systemic racism and the history of African Americans in our country.

There are 8 comments on Joe Jones, BU Men’s Basketball Coach, on Race, Sports, Politics, and Change