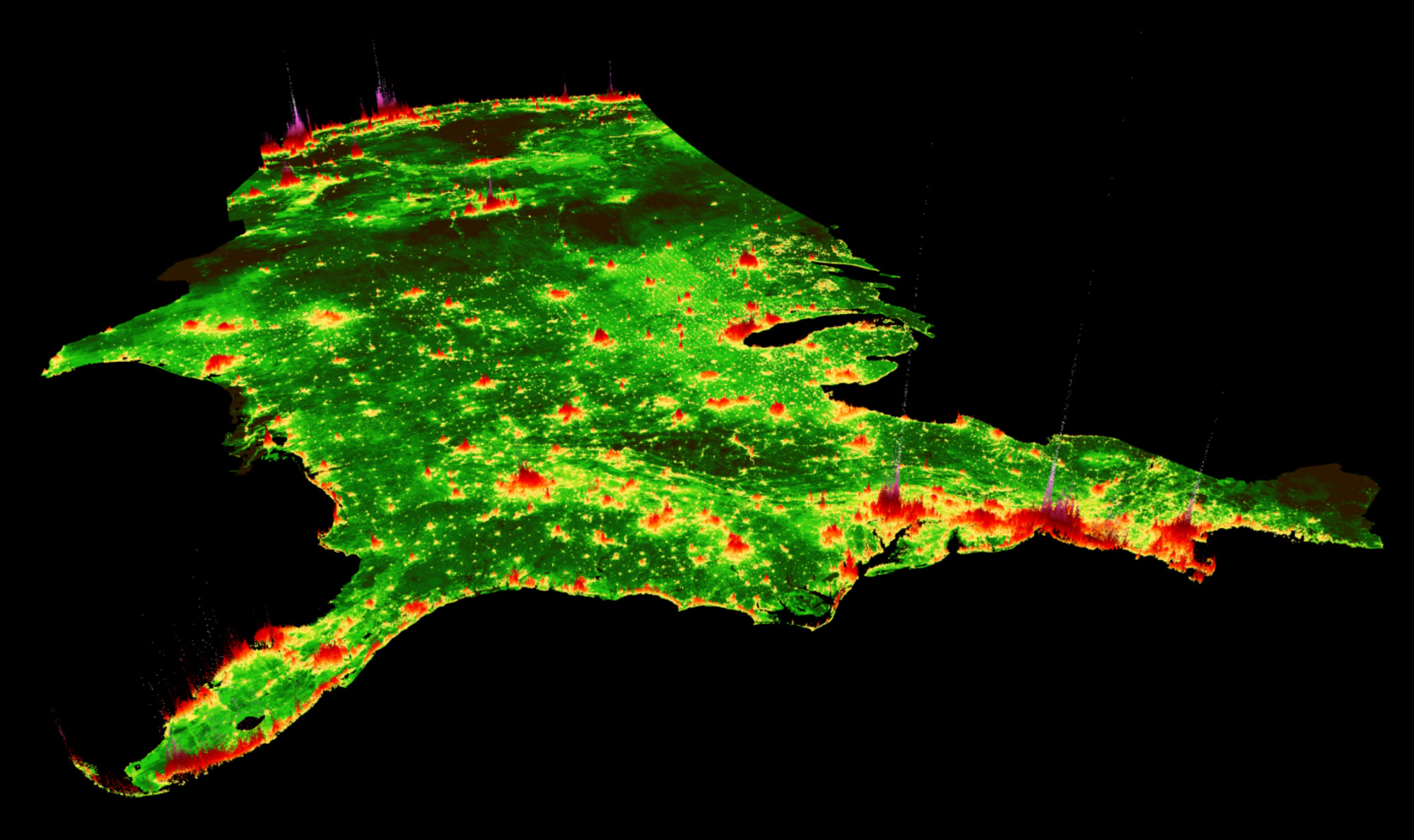 Since the start of 2020, the effects of global climate change have been increasingly apparent, from the wildfires that ravaged California and Colorado to Arizona experiencing the highest number of consecutive days with temperatures skyrocketing over 100 degrees Fahrenheit. Issues of climate change and conservation received more attention during the first presidential debate on September 29, 2020, than in any other presidential debate in history.

Christoph Nolte, a Boston University College of Arts & Sciences assistant professor of earth and environment, has spent the majority of his career studying how effectively conservation efforts protect the environment from our changing climate. Through research, he’s asking key questions about where concerted conservation efforts take place and what difference they make for our world at large.

To inform future decisions about conservation policy, Nolte has now created the first high-resolution map of land value in the United States—a tool he says will improve our estimation of environmental conservation costs, inform policy recommendations, and help other researchers conduct their own studies on rebuilding and protecting what’s left of natural resources and the biodiversity within our ecosystems. The Brink caught up with him to learn more about the map and its related findings, which were published online in Proceedings of the National Academy of Sciences.

The Brink: You’ve created the first high-resolution map of land value in the United States. What spurred this research?

Nolte: I was dissatisfied with the quality of cost data in conservation research. Land conservation decisions are about trade-offs. If we wish to keep forest carbon on the ground, species’ habitats intact, wetlands functional, or landscapes beautiful, conservation usually means that we also give up something: the benefits from alternative land uses.

Arguments in favor of more conservation are widespread. For instance, Harvard University’s E.O. Wilson suggests that 50 percent of Earth should be protected. However, those points are incomplete if they are not also explicit about what we should be giving up where, who wins and who loses, and who gets to decide.

Ignoring costs can make us blind to the negative effects of regulation, often borne by those without a voice. In the case of voluntary conservation programs, ignoring cost can mean that we end up with a proposal but insufficient funding. If we want to make informed societal decisions about conservation efforts, we need reliable, publicly accessible estimates of its cost.

Unfortunately, it is difficult to get good data for conservation cost. Conservation organizations don’t freely share their financial records. Land prices can be good substitutes for data on conservation cost, but such data is valuable, sensitive, and unavailable to the public in most countries. So when large-scale land price data in the United States became available to academics for free for the first time, this created an exciting opportunity to create the first high-resolution map of land value and see how well it would predict conservation cost.

What data did you use to generate this map?

There are many datasets behind this map. Perhaps the most important is a nationwide database of properties and their sales. This dataset came from the real estate company Zillow, which obtains the data from public records and makes it available to academics and nonprofits. In my research group, we developed a system that links this data to digital maps of property boundaries. This allows us to obtain detailed information on land characteristics: buildings, terrain, land cover, road access, water access, flood risk, local demographics, nearby amenities, and so on. This data is fed into a machine learning algorithm, which learns to predict sales prices from its knowledge of the characteristics of each property. After the algorithm is trained, I let it predict the sales prices of every property in the country. The result is this map.

What does this map tell us about environmental conservation costs? Why is it essential to have accurate land value data?

I found that most of the cost estimates that were used in the literature have underestimated the cost of conservation in the United States. This underestimation is particularly large near cities, where land values tend to be much higher than previous proxies suggested. In other words, it means that we will need substantially higher levels of funding than previously assumed if we want to achieve certain environmental goals, such as protecting all floodplains from development or protecting species habitat in the face of climate change.

How can your research help to educate policymakers on future conservation plans and priorities? Why is this important?

I believe that it is good to be realistic about what a given level of funding can achieve. For instance, in August, Congress passed the Great American Outdoors Act, a historic bipartisan bill that makes $4.5 billion of federal funding available for land protection. If previous estimates of conservation cost were correct, this budget could help reach proposed habitat protection needs for all species in the United States. However, the new cost data suggest that even such an unprecedented budget covers merely 5 percent of what is actually needed. That’s a big difference!

More accurate cost data can also change recommendations about where conservation investments should go. When I reproduced recent work, about one quarter of the sites recommended for species protection shifted from one location to another—for instance, from expensive Long Island to slightly less expensive southeastern Massachusetts. While this result should be taken with a grain of salt, it shows that the quality of cost data matters. The good news is that the cost map is now published, so anyone can incorporate it in their analyses and revisit their earlier findings.

How can people best use this data when thinking about environmental conservation as it relates to their day-to-day lives?

Data on the cost of conservation help us be real about the actual magnitude and severity of the conservation problem we are facing as a society. Many of us feel positively about the benefits that conserved lands provide.

However, not all of us are willing to make sacrifices to protect these lands, whether it is by reducing our own ecological footprints, or by voting in favor of local land use regulations or measures that increase taxes to fund conservation. In the midst of this, we are exposed to advertising that suggests that we can cheaply “offset” our effects on the environment—for instance, that we can become “carbon neutral” for a few dollars by purchasing carbon offsets when we fly.

A closer look at many cheap offsetting schemes suggests that they don’t actually reduce emission by very much. But their existence has the side effect that we are getting our hopes up that there might be a cheap way to get around the conservation problem. In reality, win-win situations are rare, and trade-offs are real. This might be difficult to accept, but we should not ignore it, even if we so desperately want to feel good about our own levels of consumption.

Despite costs being much higher than originally estimated, why is conservation such an important investment?

Answers to this question have two dimensions: science and values. Science helps us understand the consequences of our actions. If we want to mitigate climate change, we need to reduce greenhouse gas emissions. Land conservation can help, for instance, by conserving forests and wetlands, reducing urban sprawl, or increasing opportunities for local recreation. If we want to prevent species extinctions, we need to protect and restore threatened habitat, conserve lands in climate refugia, and build ecological corridors, so species can move as temperatures rise. And if we want to avoid damages from flooding, we should protect more floodplains from development.

Science tells us about the consequences of our actions, but it doesn’t tell us what to do. The more difficult question is how much we, as individuals and as a society, care about these outcomes, and what we are willing to give up for them. There are eight billion of us. What each of us cares about is shaped by our diverse beliefs and morals, our upbringing, the people in our lives, the media we consume, the things we enjoy doing, etc.

Given my affiliation, it probably won’t be a surprise that I feel positively about policies that reduce our collective human footprint, but it is unwise to elevate anyone’s individual worldview to a standard. Instead, I think what is desirable is to have a broader societal conversation of well-informed citizens that make those decisions together. My job, alongside that of thousands of other colleagues, is to provide the tools that can help us gain clarity about what’s at stake.

Are there any other surprising findings from your recent research? Could this data have other applications in areas outside of conservation (for example, real estate)?

I was surprised by the predictive power of the algorithm. As a validation step, I tested whether estimated land values could predict the actual cost of more than 4,000 public land acquisitions for conservation that were distributed all over the country. I expected that the predictions would outperform the proxies used in earlier studies, which they did. But to my surprise, the predictions even outperformed the estimates of tax assessors.

Tax assessors are tasked with estimating the value of all properties in a given jurisdiction for taxation purposes, and part of that process often involves estimating the “fair market value” of each property. Because assessors work locally and know their area much better than a national dataset does, I would have expected their estimates to vastly outperform mine. However, instead, I found that mine were 29 percent more accurate. This does raise the question of why these differences exist and opens up new interesting avenues for scrutinizing existing methods for property taxation.

In your opinion, what is the single most important conservation issue facing the world today?

It would be difficult to answer this question without pointing towards climate change. It affects everything else that we think about in conservation. If we don’t stop climate change, conserving species where they are today won’t conserve them in the future. Future flooding and sea level rise will be a lot less manageable. And we worry a lot more about the conservation of forests and wetlands today because we know that their loss fuels this fire.

At a project level, if you want to persuade people that conservation is a good idea, talking about rare or interesting species, beautiful landscapes, and recreational opportunities might get you more traction. But many of those efforts might be a drop in the bucket if we don’t address this massive elephant in the room.

What do you hope people take away from this project? What are you planning to research next?

For me, for my students, and for colleagues at universities all over the country, the synthesis of this rich database has created novel opportunities for empirical research that were unthinkable just a few years ago. We currently support research on the economic risks from flooding, oil spills, and hazardous waste, the economic impacts of land regulations, the benefits of water quality, and priorities for emissions reduction from forest protection.

My own curiosity has mostly to do with projects that help people protect the places and species they love: identifying opportunities for protection, scrutinizing the effectiveness of existing programs, and reducing the informational barriers to get conservation done. It is an exciting time to do this research, and I’m glad that so many fantastic colleagues around the country are interested in advancing the frontiers of knowledge together.

This research was supported by the Department of Earth and Environment at Boston University, the Junior Faculty Fellows program of Boston University’s Hariri Institute for Computing and Computational Science & Engineering, and The Nature Conservancy.

When Wildlife, Politics, and Morals Collide