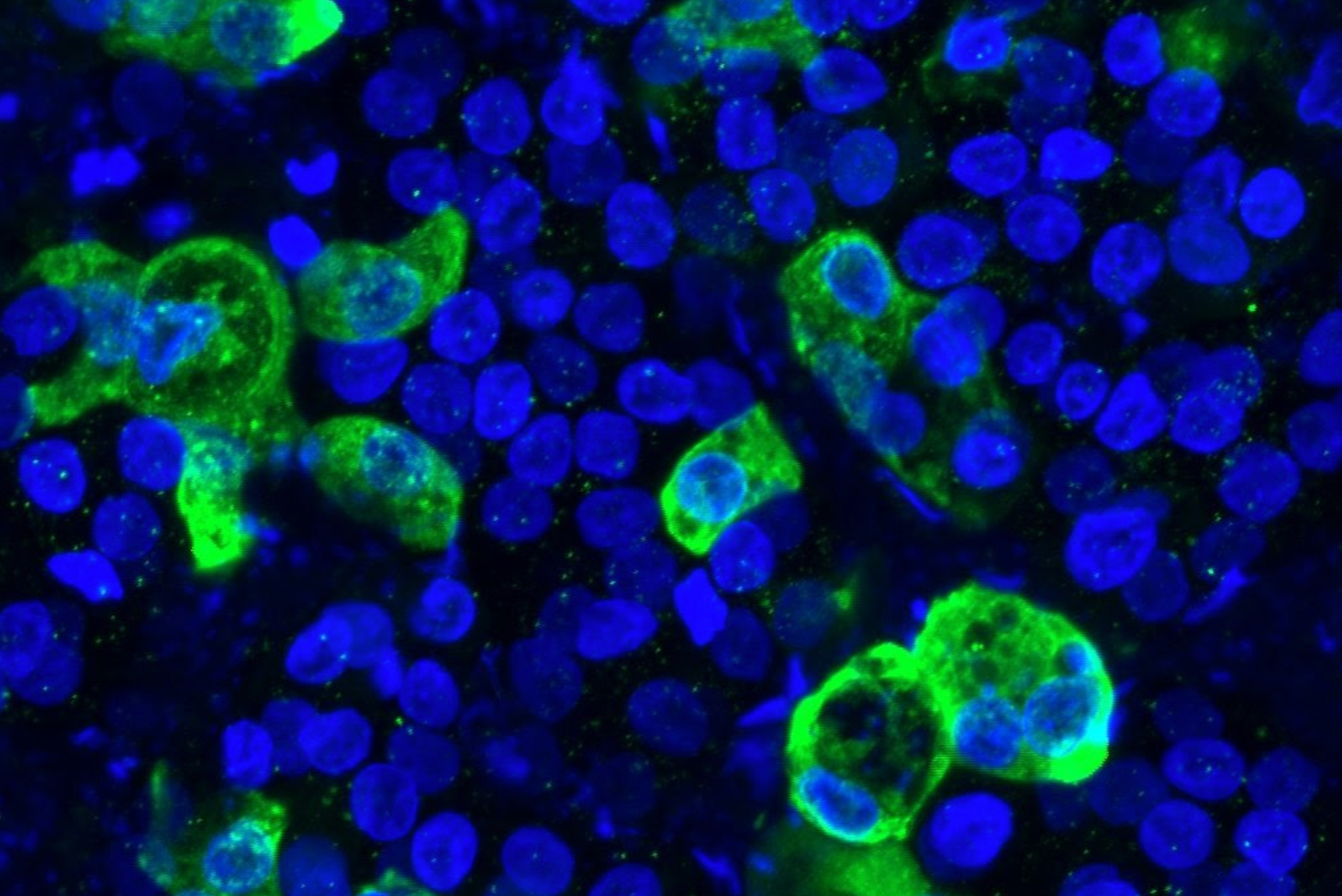 As the coronavirus pandemic ripped through through the United States in March, scientists at Boston University’s National Emerging Infectious Diseases Laboratories (NEIDL) and the Center for Regenerative Medicine (CReM) dropped all other research to focus exclusively on the SARS-CoV-2 virus. They joined forces to develop the most relevant research model possible for understanding how the virus impacts the lungs, engineering living, “breathing” human lung cells from stem cells for the task.

Those efforts from early on in the pandemic have borne a leap forward in our understanding of how COVID-19 infections trigger deadly levels of lung inflammation. Their discovery of a pathway that sets the lungs ablaze with inflammation has launched a search for new therapeutics that could block this process before it can take off and turn fatal.

According to their findings, published online last week in Cell Stem Cell, the trouble starts soon after the air sacs in the lungs are infected with SARS-CoV-2, when the virus activates one of the body’s biological pathways known as NFkB (the k is pronounced “kappa”). As that’s happening, the virus also suppresses the lungs’ ability to call in the help of the immune system to fight off the viral invaders.

When the signal for help finally goes out—several days after infection has taken hold—an army of immune cells swarms into lung tissue heavily laden with infected, dead, and dying cells and with unchecked levels of inflammation triggered by the early activation of NFkB. The incoming immune cells, by attempting to destroy every infected cell in their path, add more fuel to the fire. Every infected cell killed by the virus or by immune cells trying to thwart viral spread tips the scales of inflammation closer to sending the lungs and other organs into total failure.

The discovery of NFkB’s role in this deadly cascade makes it a promising target for new therapeutics that could tamp down its activity early on after infection with the novel coronavirus. A new drug could help reduce inflammation before it gets out of control, and give the body critical time to recruit help from immune cells before conditions have deteriorated too far.

“We’ve learned [NFkB] is the primary pathway that drives inflammation [in COVID-19 patients],” says one of the study’s corresponding authors, Darrell Kotton, who is a director of the CReM and a pulmonologist at BU’s teaching hospital, Boston Medical Center (BMC). “Now the challenge is to find effective therapeutics that work in patients who are developing acute respiratory distress syndrome [ARDS].”

Kotton says the revelation about NFkB’s role in severe coronavirus infections is important because the data was gathered directly from observing human lung cells infected with live SARS-CoV-2 virus. That’s different from the vast majority of coronavirus research written about to date, which has been based on infecting much more commonly available types of cells for research: kidney cells derived from African green monkeys. Those kidney cells are easily grown and maintained in culture dishes, but don’t accurately represent human lung cells.

“You learn a lot more about how human beings respond to the virus and how drugs might work in them when you infect human lung cells, not kidney cells from monkeys,” Kotton says.

For study co–corresponding author Elke Mühlberger, a virologist at the NEIDL who typically works with some of the world’s most lethal viruses, like Ebola and Marburg, it was remarkable to witness the effect SARS-CoV-2 virus has on human lung cells.

“It was scary to see how much damage the virus does to these cells,” Mühlberger says. “It disrupts the [membrane surrounding the cell nucleus], and causes significant changes to the cell’s organelles,” which are the internal parts of a cell that carry out essential functions. “The cells really suffer,” she says, and not even Ebola or Marburg viruses have as much impact on the cell’s internal organelles as the novel coronavirus does, she adds.

“I don’t think the senior members of our research team and I have ever experienced anything like this in our careers,” Kotton says. He and co–corresponding author Andrew Wilson, also a CReM scientist and a pulmonologist at BMC, have avoided stepping foot in their own labs in the CReM in order to protect their colleagues from the coronavirus exposure risks they endure inside BMC’s intensive care unit.

At BMC, Kotton and Wilson frequently saw patients infected with the coronavirus who, despite having mild cold-like symptoms and feeling pretty healthy for a week or so, would suddenly crash, needing to be intubated and ventilated. “We saw this process taking place right in front of our eyes. It was so evident to us that we were trying to keep patients alive after the damage to their lungs had already happened,” Kotton says.

That fueled their interest in looking at what’s happening inside the lungs’ air sac cells at the onset of coronavirus infection.

“We had to get a glance at what the cells are doing when the disease first takes off, because after that, it’s probably too late to stop the process except to help keep patients alive with a ventilator,” Kotton says. “The first day a lung cell gets infected, what is the cell telling us? We hypothesized that time frame might be a much more effective window to intervene.” Peering into that window, they identified NFkB as the primary culprit.

To make that discovery, Adam Hume, a co–lead author of the study and a senior research scientist in Mühlberger’s lab, performed the SARS-CoV-2 infections on sophisticated lung models created by stem cell researchers in Kotton and Wilson’s CReM labs—Jessie Huang, Rhiannon Werder, and Kristy Abo, also co–lead study authors. Their models of human lung tissue—three-dimensional structures of lung cells, called “lung organoids”—are grown from human stem cells. The CReM’s organoids have been used by researchers at BU and with collaborators elsewhere to study a range of chronic and acute lung diseases.

For coronavirus research, CReM scientists leveraged their organoid expertise to grow lung air sac cells, the type of cell that lines the inside of lungs. Air sac cells are usually difficult to grow and maintain in traditional culture and difficult to extract directly from patients for research purposes. That’s why many labs rely on the use of more readily available cell types, like kidney cells from monkeys.

The CReM team then placed the human air sac cells into an experimental model they had previously developed to study the effects of smoking cigarettes. The cells are plated on a mesh membrane; on one side they are exposed to air, just like air sac cells experience in the lungs when we breathe. On the other side of the membrane, the cells are fed by a liquid concoction that mimics the nutrients and growth factors supplied by lungs’ blood vessel network.

From there, the NEIDL team stepped in to infect the lung model. Hume added droplets of live coronavirus on top of the lung cells, infecting them from the air side of the membrane, similar to the way the virus infects cells lining the inside of the lungs when air containing the virus is breathed into the body. He and Mühlberger have run these experiments inside one of the NEIDL’s Biosafety Level 4 (BSL-4) laboratories, the highest possible level of biosafety containment used for infectious agents that pose especially high risk to humans.

Based on the experiments implicating NKfB’s role in severe coronavirus cases, the CReM and NEIDL researchers are now collaborating with researchers at BU and beyond who have libraries of drugs and novel chemical compounds. Together, the collaborators plan to screen for potential therapeutics that could block the train of inflammation from leaving the station.

Using the CReM lung model at the NEIDL, the researchers have confirmed that existing drugs remdesivir and camostat are effective in combating the virus, though neither is a perfect fix for controlling the inflammation unleashed by NFkB.

Remdesivir, a broad-use antiviral, has already been used clinically in coronavirus patients. Camostat, an antiviral and cancer drug sometimes used to treat pancreatitis, has previously been tested in a type of cell found higher up in the lungs, in the airway, and found to be effective. With the BU team’s experiments confirming it also works to treat coronavirus infection in the lungs’ air sac cells, Kotton says camostat is a good candidate for clinical trials.

“It’s been wonderful to finally be on the offense, rather than on the defense, like we were early on in April and May,” Wilson says. At BMC, he recalls during the springtime surge of coronavirus cases, “There was a period of time where overhead announcements, calling code teams to assist with a patient doing poorly, would go off at least once an hour. It was really, really intense.”

As patients struggled to survive, Wilson says he and other clinicians felt like there was relatively little they could offer in terms of specific therapies for the coronavirus. “That was so hard—you so badly want to do something to help someone get better,” he says.

Now, untangling the workings of the virus through research, he feels there has been an important change of mindset.

“How can we attack this virus? The cells we’re using in these experiments are the cell type most prominently affected in sick patients, the patients we’re caring for who have developed ARDS,” Wilson says. “It’s really important to do research on the right type of cell. It tells us how the virus is working and also what parts of the body’s normal immune mechanisms aren’t working like they’re supposed to.”

There are 3 comments on In Deadly COVID-19 Lung Inflammation, BU Researchers Discover a Culprit in NFkB Pathway